British artist Conrad Leach on the advantage of not having studied fine art in college, how his latest exhibition is a celebration of Britishness, and the best day he ever had. 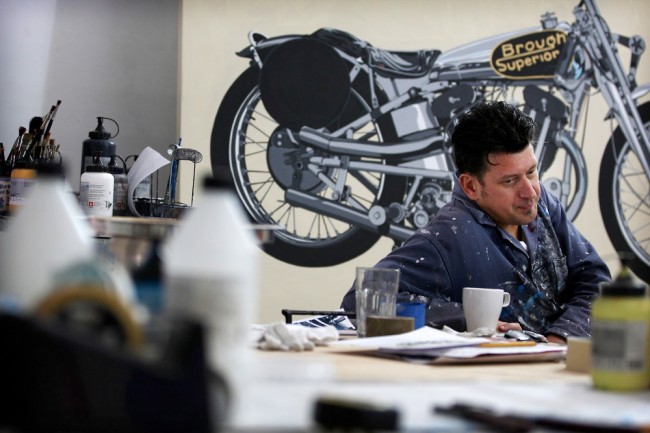 “A celebration of Britishness, not necessarily British things, just things that inspire British thinking. Harking back to a time before health and safety took the edge off pioneering behavior.”
– conrad leach on paradise lost, his latest exhibition.

Can you tell us about yourself and where you live and work?
I live and work in London. I have a studio in Clapham. I live opposite a park which is great for experiencing the seasons and Having a garage behind my block means by bikes are on tap.

You’re a self-taught painter, from your perspective what are the advantages of not having gone to art school?
The advantages of not studying fine art at college are that the instinctive approach to the work is dominant. Also there is a sort of freedom to experiment. Ironically, I am spending a lot of time researching established painting techniques at the moment.

Do you remember the moment when you decided, this is it, I want to do this for the rest of my life.
Painting was always something pretty important in my life. I never imagined being able to paint as a profession. One day I met someone who convinced me to paint full time. He is a hugely successful person and I thought his advice and support was probably worth taking. 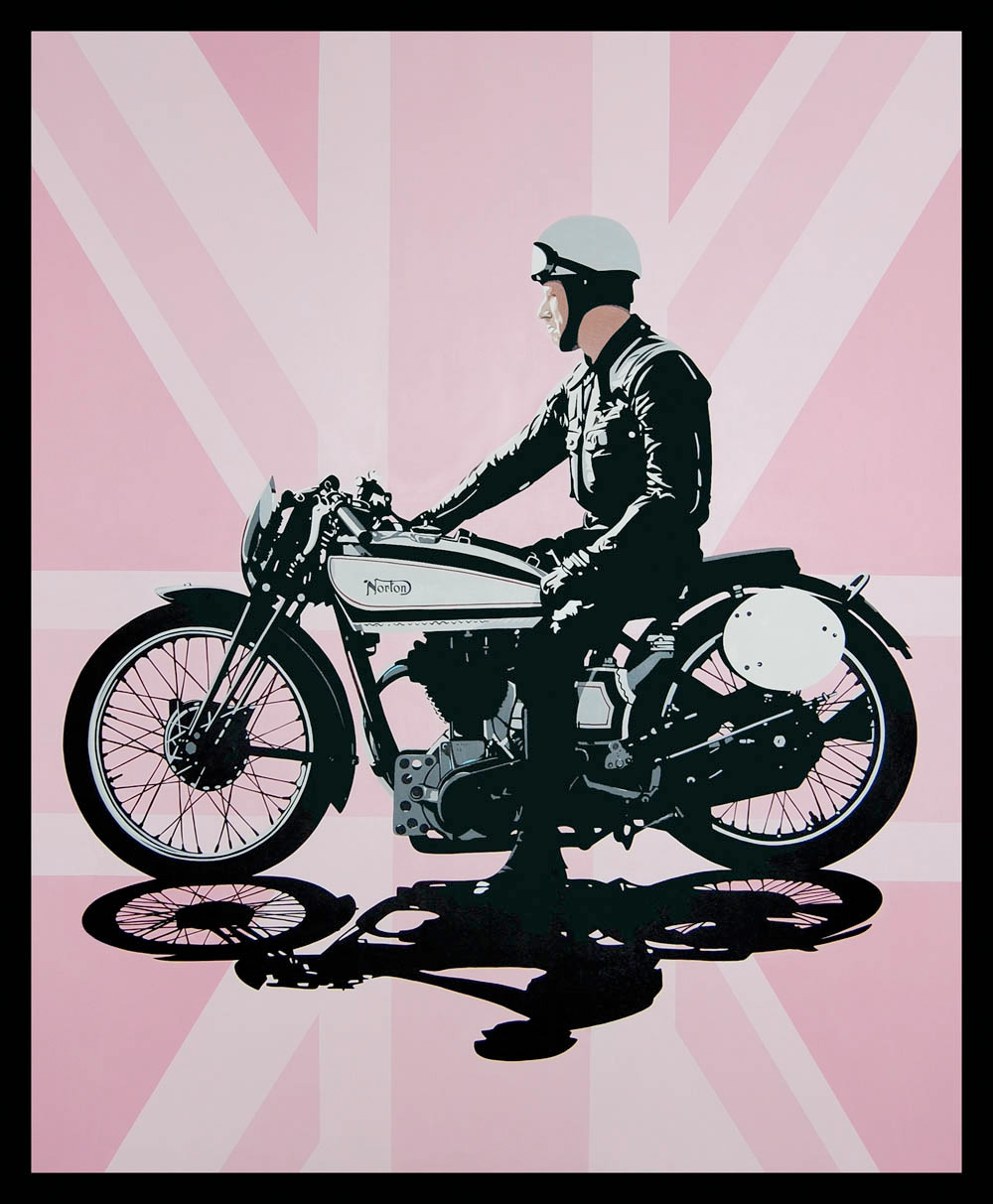 What’s your daily routine like? What time of day do you like to paint and draw?
The initial freedom meant late nights and late starts, there was a time when both me and my girlfriend were pretty much nocturnal. Now I prefer day time working, catching up on emails etc in the morning and painting from lunchtime to early evening. Show time that goes out the window though! 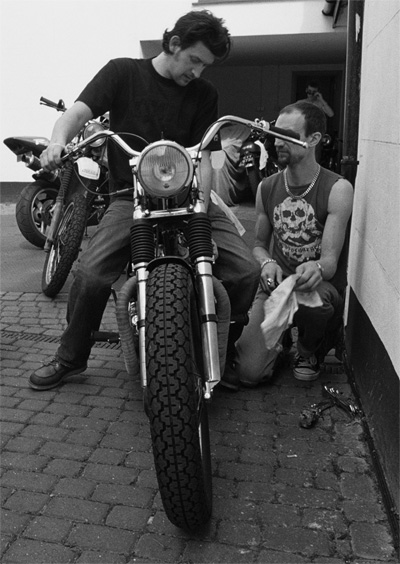 I always ask this question to artists friends..is it obvious when you’re done with a painting?
Yes. and no … sometimes its obvious, sometimes it’s best to leave it for a while and finesse a bit later on. There is no rule as such.

What artist influenced you the most?
Gerhard Richter, no question. He’s still working. I love the way he follows his instinct and applies the technique/style to suit.

Can you tell us about your latest exhibition, Paradise Lost? How long did you work on this exhibition?
Three years in the conception, making the work along the way. A celebration of Britishness, not necessarily British things, just things that inspire British thinking. Harking back to a time before health and safety took the edge off pioneering behavior. I am sure the world is now a ‘safer’ place, but is that a good thing?

Steve McQueen is one of those icons that draws your interest…what was it about that guy that endures?
Steve like Elvis, Coca Cola has become an world-wide symbol. Originated in America but interpreted internationally. What he represented influenced my (and most kids my age’s) thinking and aspirations.

Speaking of stars that raced cars like a demon, Paul Newman is the one guys that my friends and I always admire…took second at Le Mans, race team owner.
Paul Newman is from the same stable as Steve for me. I love his personal style and am also a big fan of his films and spaghetti sauce.

You once said, “I’m not a Harley guy or a Triumph guy, I’m the right bike guy.” Can you elaborate on that?
I own both as a personal preference but I do not feel I have to swear allegiance to either factory. The right bike thing is about enjoying the idea of riding rather than the bike defining who and what you are.

“Paul Newman is from the same stable as Steve [McQueen] for me. I love his personal style and am also a big fan of his films and spaghetti sauce.”

What was it about Britain and all these legendary motorcycle companies having started there?
We used to be engineering superstars and the bike thing evolved from that melting pot … there was also a strong manufacturing base in the UK and that help the ideas become reality. We were our own worst enemy though. Having created all this wonderful stuff, we then legislated and politicized the whole thing and without clear guidance, the inevitable happened.

There’s a photograph of you in your studio, and there’s a Brough Superior you painted hanging on the wall. Fascinating bike the Brough…I understand the company is being revived.
Yes, Mr Mark Upham is making beautiful recreations of the original models.

What museum do you frequent in London?
The British Museum is pretty inspirational. I go to the occasional art show, usually retrospectives of Established or dead artists, not too many contemporary shows.

How many motorcycles do you currently own? How do you decide which bike you’re going to take out?
Three at the moment. A ’56 Panhead, a ’68 triumph TR6 and a ’78 Triumph Tiger. The Tiger is my everyday ride, I have had this bike for 20 years and still love to ride it. The Panhead is great to ride long distances. And my ’68 is a hybrid of ’66,’67 and ’68 parts. These are my 3 favourite years, looks-wise for Triumph. I created a ‘custom’ Triumph that is most aesthetically pleasing for me. So I just like having that one in my studio to look at.

Recently, you road a motorcycle from Philadelphia to New York – can you tell us about that trip? How is riding a bike different in the U.S. versus England?
Philadelphia to NYC via Boston on a BMW GS1200. Raising money for AMFAR as a guest of Kiehls (one of the major supporters of AMFAR) Kiehls have a long tradition of vintage HD’s on display in their stores. The story goes the founder of Kiehls was an avid bike guy and used to keep a motorcycle in the back of the store to work on in the quiet periods. I hope that’s true! Riding in the U.S. is total pleasure. The weather for one, and the distances you can cover for another. 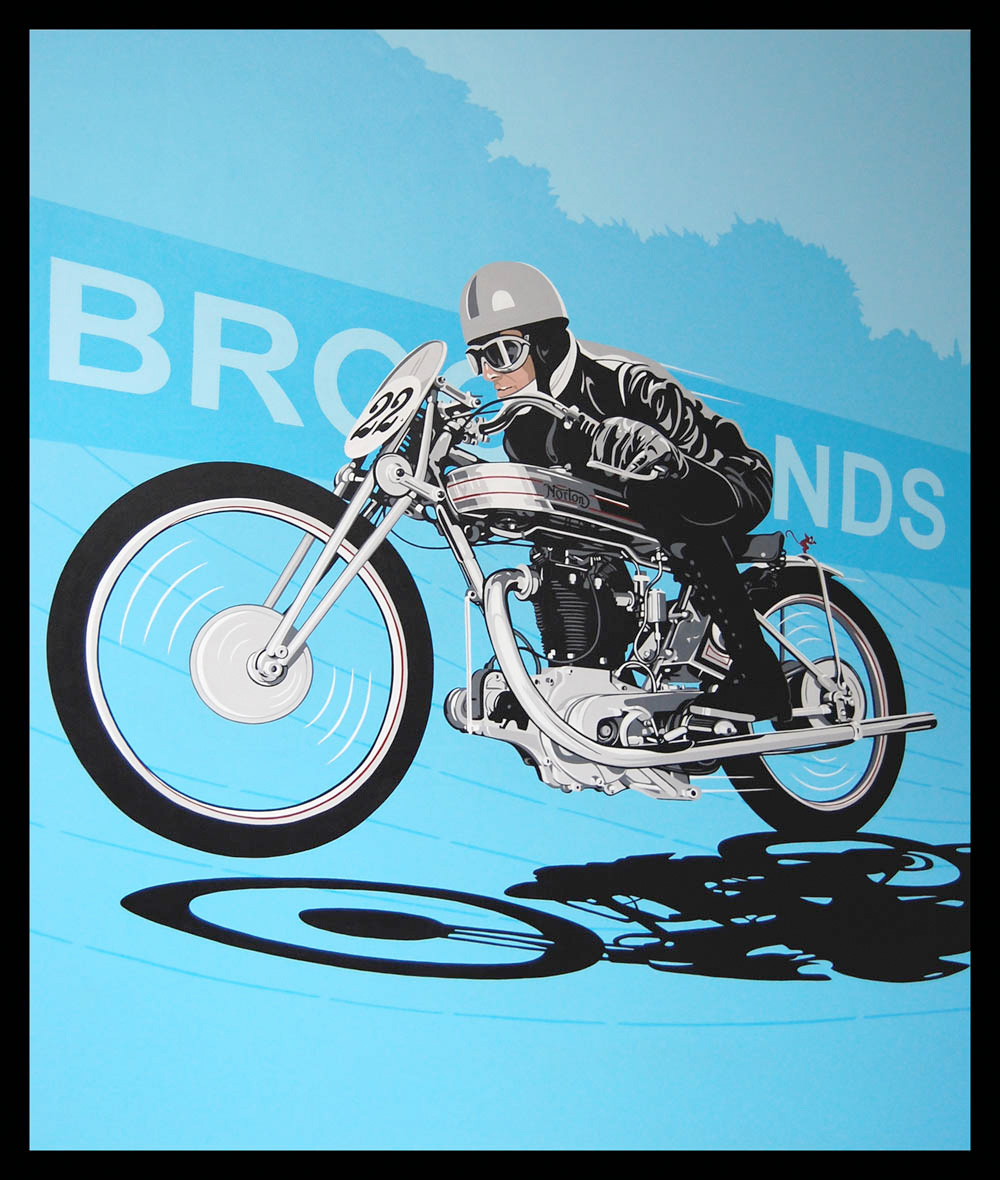 Money’s no object, what bike would you go out and buy right now? What is it about that bike that you would spend a fortune on?
As a Brit the thrill and exotic nature of early boardtrack racing still gets me going. I could easily get carried away with Indians, Excelsiors, Merkel’s, Popes etc.

City you most enjoy motoring in?
London. To really enjoy riding a bike in town, you have to know the place well and it is the city I have ridden to most in.

The one or two things you always take with you on a long trip?
Good glasses (open face helmet all the way for me) and gloves.

Best place in your neighborhood to grab a bite and a drink?
My house, when my girlfriend is cooking.

Favorite band growing up? Music you like listen to nowadays?
The Gun Club then … The Black Angels now.

On a good day, how would your friends describe you?
A bit intense, but quite funny.

Most memorable day?
Dropping through the trees (snowboarding) at Kirkwood USA during a blizzard with my good friend Matt (Dice Magazine) Davis. Even on that day I knew it was up there.

What’s on the horizon for you?
Painting shows in Asia and UK and hopefully another bike related show in the USA soon. 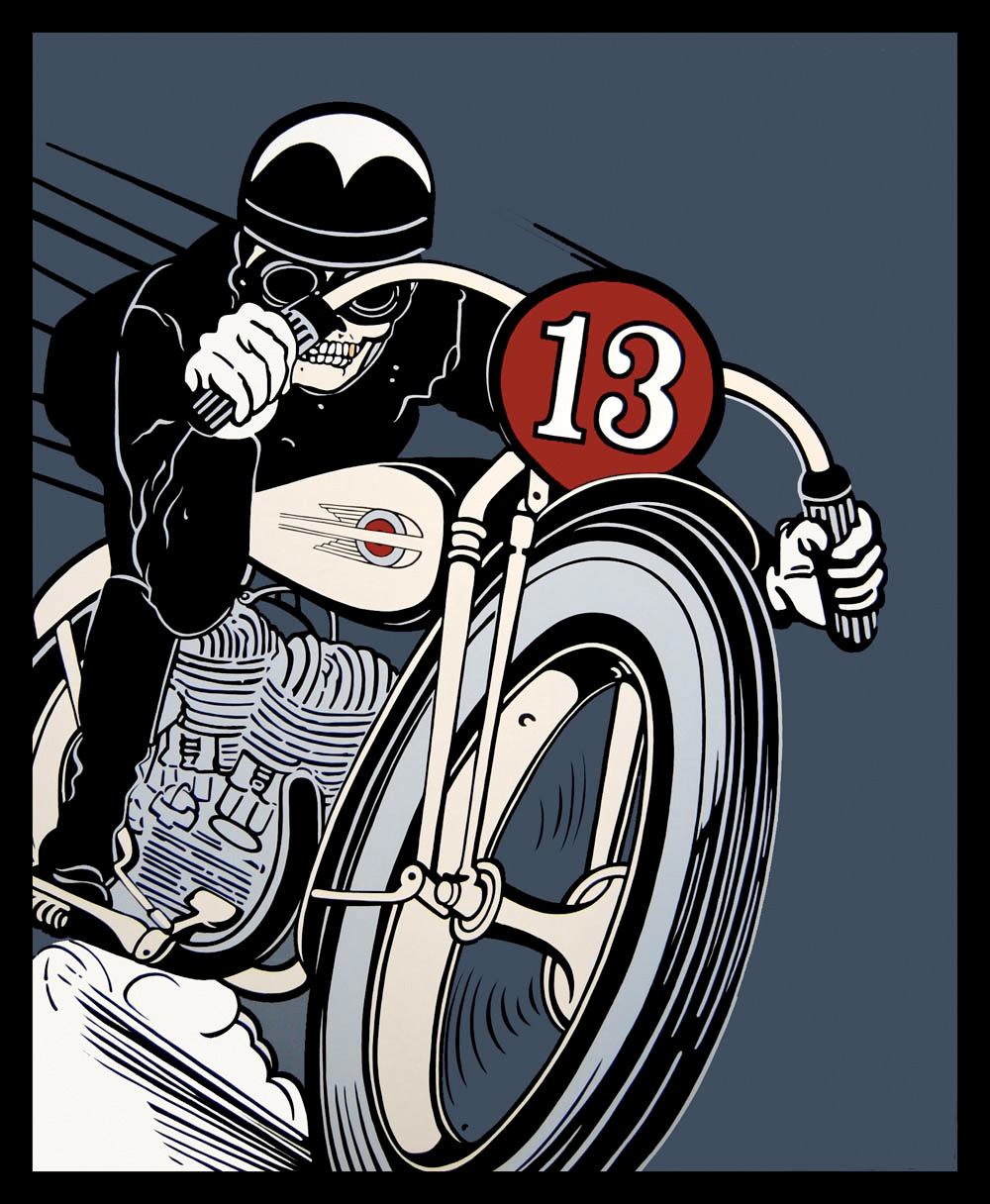