Pat Dolan of Sportsman Flyer on the history of motordrome racing, how he came to build motorbikes, and why his vintage-looking saddles have leather flaps hanging off the sides. (Let’s just say the boys will be thankful). 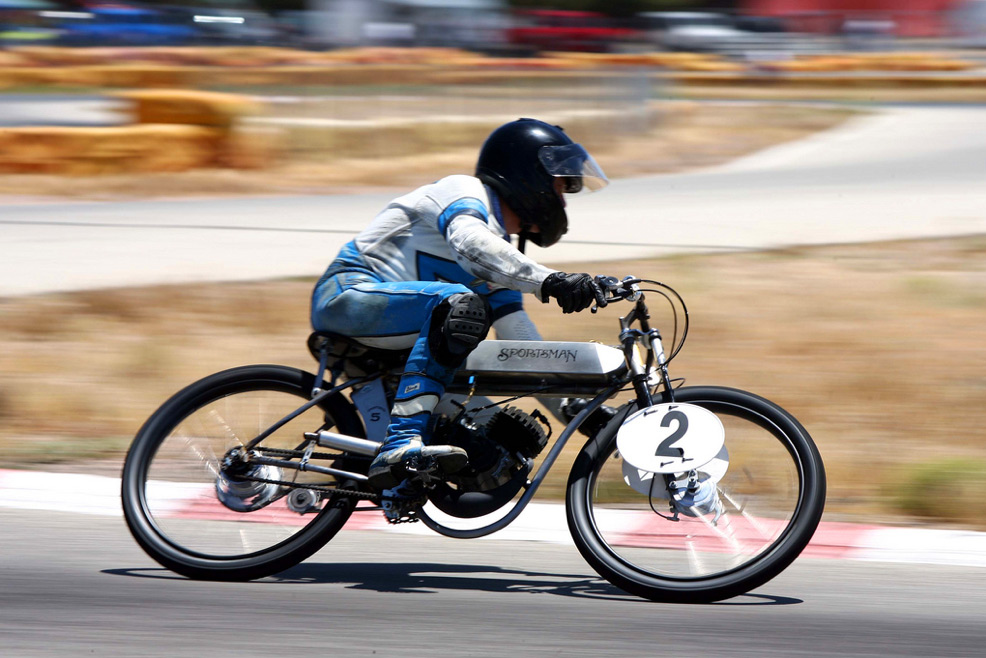 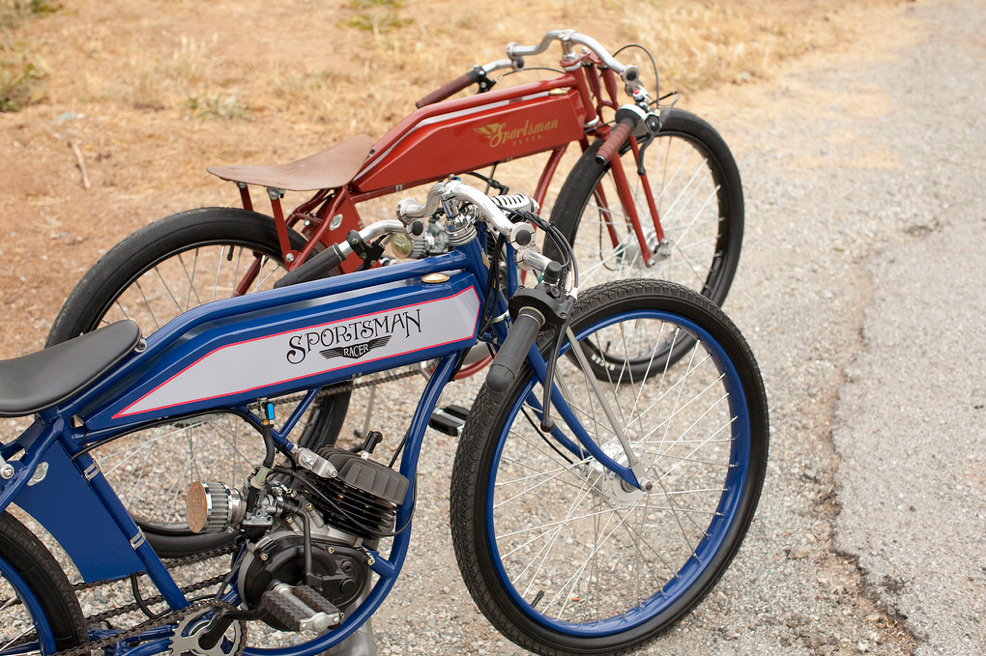 Can you tell me a little bit about yourself and Sportsman Flyer?
Well, I have a back-round in welding and fabrication and have been working around equipment most of my life. I’ve been building and restoring cars since high school. I also enjoy sports, not the traditional team sports like baseball or football, but other sports like surfing, bike riding, flying, hunting and fishing. The Sportsman Flyer idea combines my interest in bicycles and the motor sports. Sportsman comes from the sporty nature of the bikes I build and Flyer refers to my time spent in aviation as a glider pilot.

For someone who has never ridden a Sportsman Flyer, what do your customers say about the experience of riding their Sportsman?
They all say they find the experience pretty exhilarating. Especially the current bikes were building. It’s one thing to run around at over 50 mph on a motorcycle, but going that fast on a motorized bicycle is quite exciting. 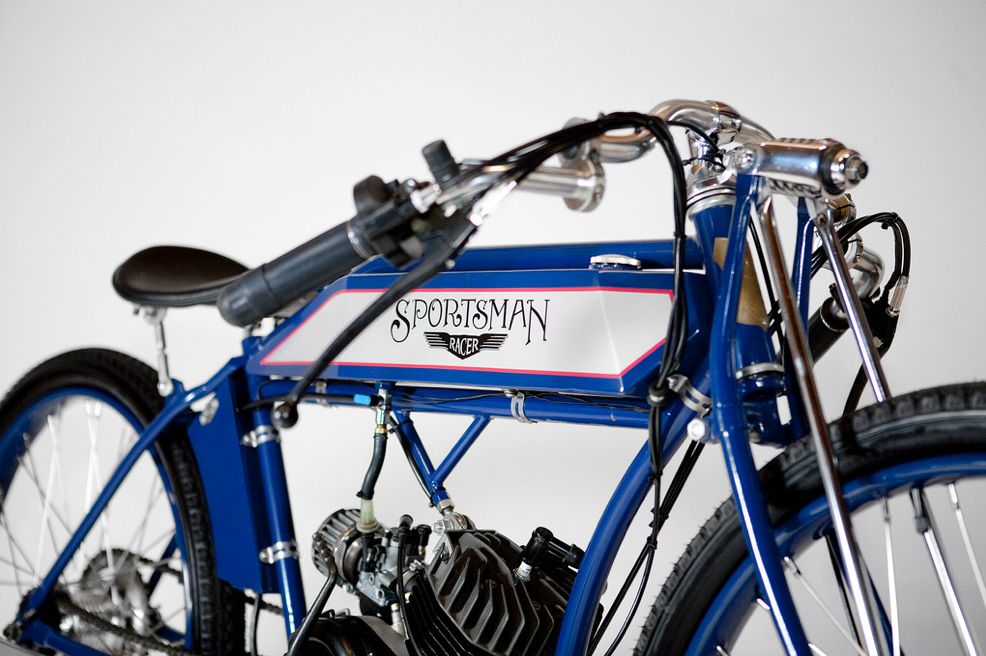 It was a popular, and dangerous sport back then…
Yes, quite popular and very dangerous. The board tracks had huge banked corners. Speeds slowly crept up past 100 mph as engine designs advanced. Any sort of mechanical failure or collision could send the bikes flying off the track and into the crowds watching the race. Riders wore little in the way of safety gear. Crashing onto a wooden surface guaranteed at a minimum a serious case of splinters.

“I find sometimes that after all my hard work I try to convince myself that something looks good, then my brother or some friends will drop by and say ‘that looks lame.’ These guys are my harshest critics and I respect them for it.”

What’s your process for building bikes – strict pre-planning or making it up as you go?
I would say a bit of both. Because of my engineering background and drafting skills I prefer to hammer out the complicated details, off-sets, wheel base, rake and trail, on the computer first. Once I have a sound platform I build out the chassis and various components. From there I finish out the bike and stand back and take a good look. Does it look right? Are the proportions correct? How does it feel when I sit on it? Once I am comfortable with the overall look and feel I dress it out. Tires, grips, leather color on the seat, paint, etc.

As time goes on I continue to fine tune all my cad drawings. Some parts I manufacture have not changed in awhile, other parts, well I change every time I make another production run. You can have a perfectly engineered bike, but if it doesn’t look and feel right, what have you accomplished? I find sometimes that after all my hard work I try to convince myself that something looks good, then my brother or some friends will drop by and say ‘that looks lame.’ These guys are my harshest critics and I respect them for it. 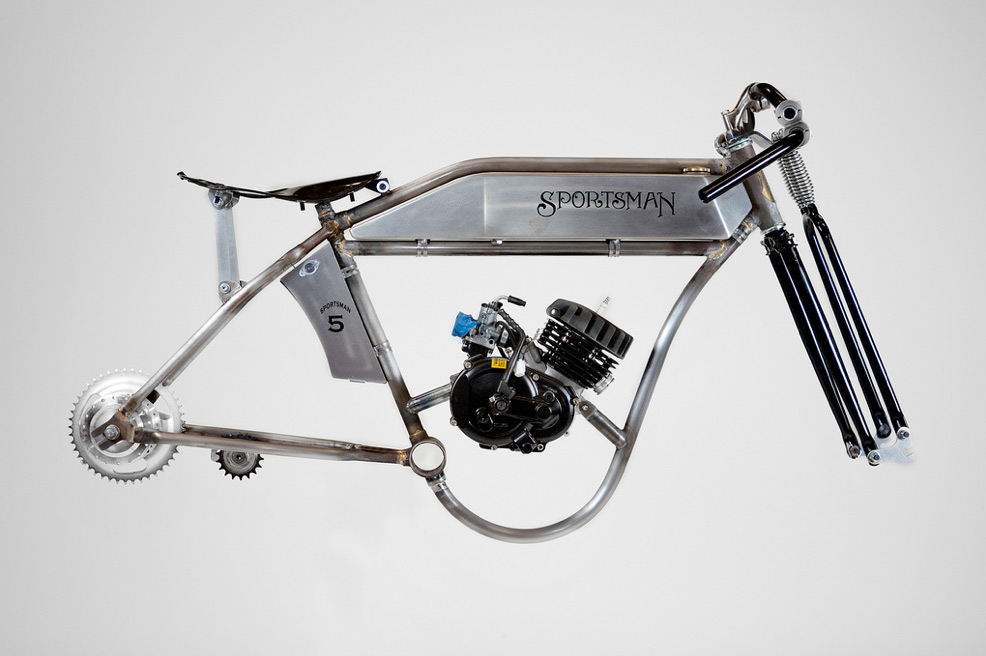 Design detail that you spend the most time refining?
The metal work. Frames and tanks. There is so much hand finish work to these parts. I build a vintage style into my bikes and try real hard to capture the era, back when designs were simple. The frame and gas tank establish that style.

Typically, how many hours does it take to build a Sportsman Flyer?
I know exactly how many hours something should take. I’m a optimist. I plan four hours and then it takes eight. Everything takes me twice as long as it should!

How have your bikes evolved?
More custom work. My first bikes were simply engines stuffed into bicycles. Now I build almost everything. Frames, handlebars, sprockets, drive systems. Also the bikes keep getting faster. My brother Rich is heavily involved in the whole Sportsman Flyer business with me. We are both a couple gear heads, building and racing each other since we were kids. If he builds something fast, I build something faster. He thinks he’s faster, but I disagree. 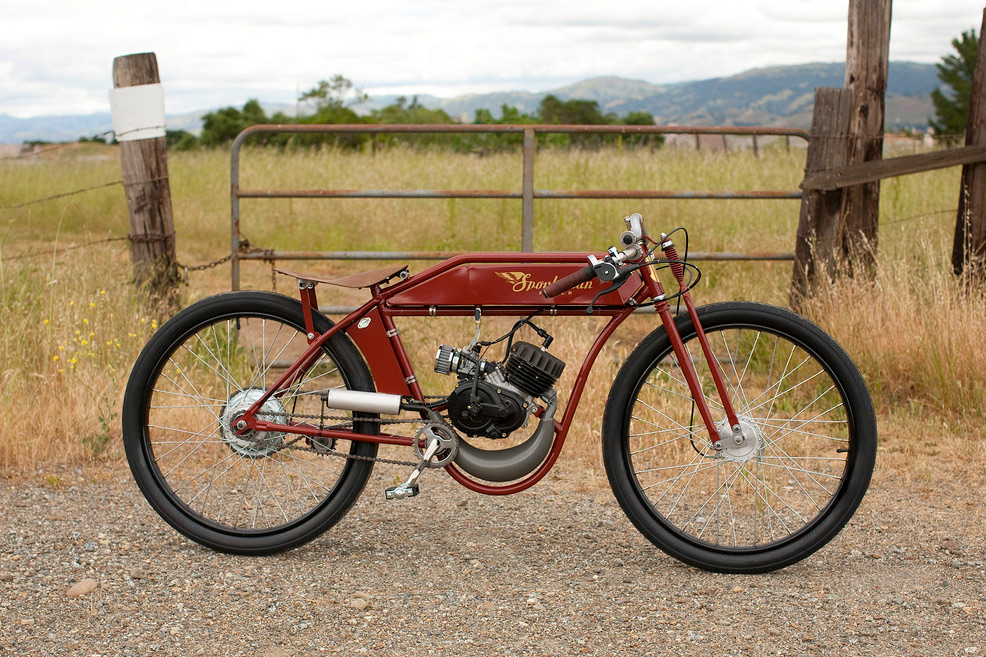 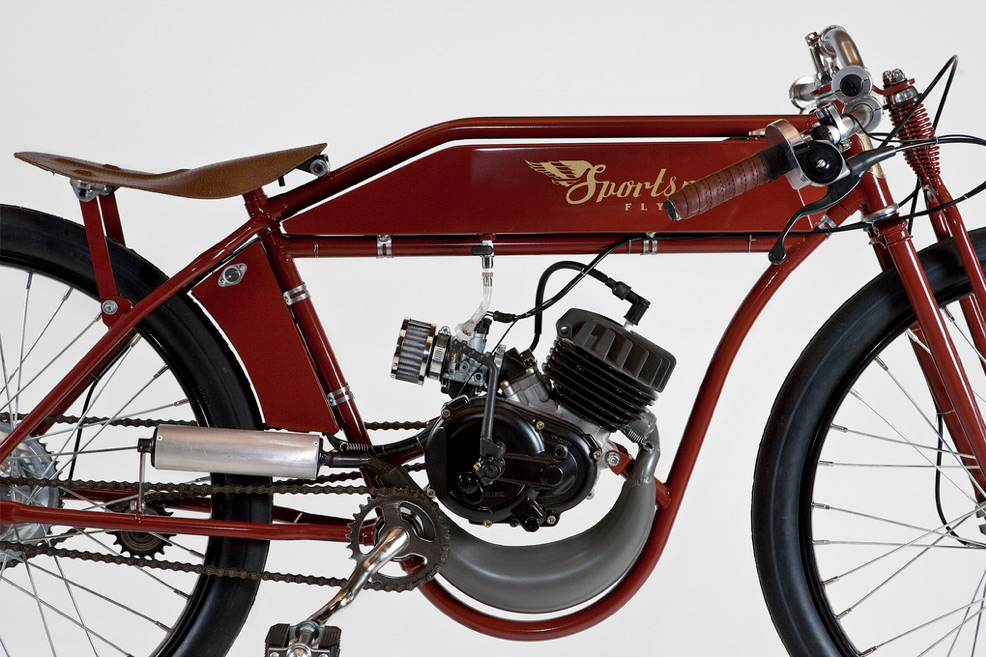 How much custom metal fabrication is involved?
Quite a bit. Almost everything is custom. We do use some off the shelf parts like hubs and rims, but even then we lace up all the wheels. Everything else is hand built. Each bike has custom machine work, laser cutting, sheet metal forming, tube rolling, then it all gets brazed, welded or bolted together. All the brazing and welding I do myself.

Distinguishing details that all Sportsman Flyers have in common?
That’s easy. They ALL have stainless steel tanks and lugged and brazed frames. I typically leave the tanks with a brushed stainless finish and never paint them. It’s kind of my trademark, now. Oh, and brass head badges. All my frames come with a custom brass head badge.

How about an electric model?
I doubt it. Loud and fast is just too much fun. Besides, they didn’t race electric bikes in 1915 and I don’t think I could blend an electric engine into a vintage design.

Tell us a bit about the typical Sportsman Flyer owner…
At first the typical rider was a guy in his late 20’s to 30’s that was putting a smaller engine into a bicycle and running one of my gas tanks. That is still a big part of the Flyer crowd, but as the engine horse power has crept up so has the cost. Now the typical rider running one of my latest models, like the Sportsman 200, is a guy in his 40’s to 60’s that already has a few cool bikes and cars and is looking for something really different. You can’t ride an original board track racer on the street because they have no clutch or brakes. You can ride one of mine and get a similar and safer experience.

“Once place I do like to pedal is through car shows or swap meets. These things get a huge amount of attention. Be prepared to answer a ton of questions everywhere you go.”

At that speed of 50 mph, if you need hit the brakes hard, how fast can you get to a complete stop?
Were running a vintage style drum brake system similar to what you would find on a light weight motorcycle. These are not modern hydraulic disc brakes. They are a good match for the speed and weight of the vehicle but you won’t be doing any front wheel stoppies.

So, no need for a motorcycle license or any kind of special license to ride a Sportsman?
I have guys who have registered bikes in the state of California. It was all done through the mail. In some states these bikes fall into a motorized bicycle category with minimal requirements. I can’t speak for other states or countries so check your local laws.

Rope pull to start?
It’s different for each of the different models based on the engine needs. My Sportsman Racer model has a kick start that comes with the engine. The Sportsman 200 model uses a rope pull start. The WZ Flyer is a pedal start.

How much does a Sportsman weigh, and how hard is it to pedal?
The 200 model is 108 pounds. The Racer model a bit less. The bikes pedal nicely but it is rare that I pedal around with a perfectly good motor ready to go. Once place I do like to pedal is through car shows or swap meets. These things get a huge amount of attention. Be prepared to answer a ton of questions everywhere you go. 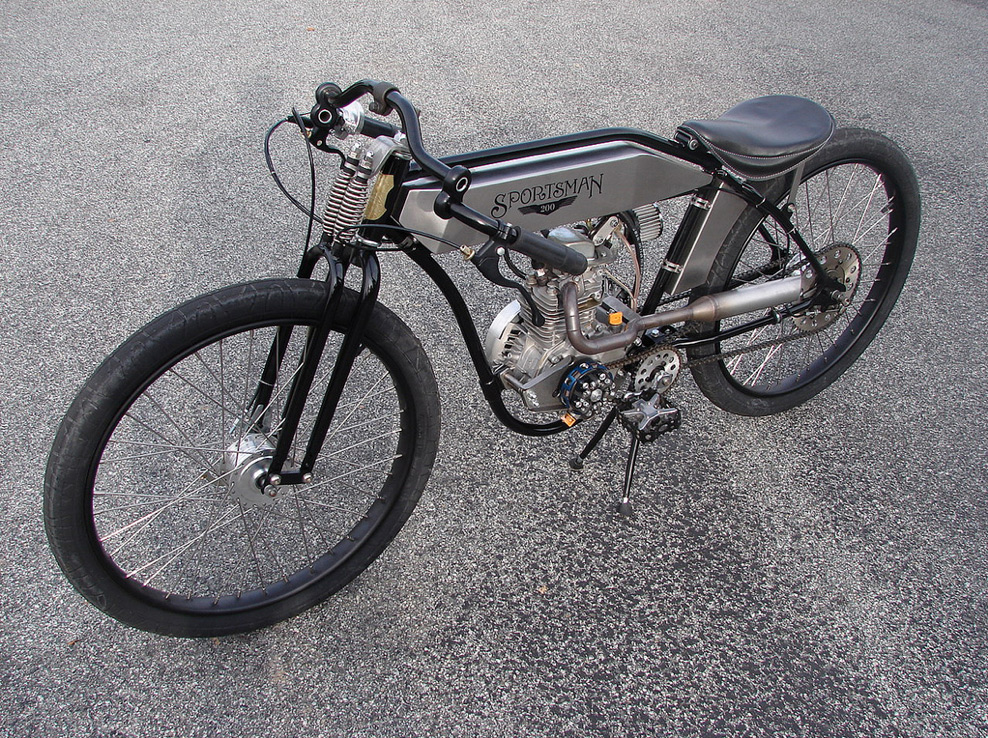 These bikes have such a classic look about them. If you could build a bike for anyone from the past — who would that be and why?
This is a really tough question. I have thought it would be cool to see what a racer from back at the turn of the last century would think of these modern versions of their race bikes. Otherwise maybe the Wright Brothers would like to take my version of a Flyer for a spin, then they would probably rob the engine from the bike and stuff it into one of their Wright Flyers. It would give them a heck of a lot more power at a quarter the weight. 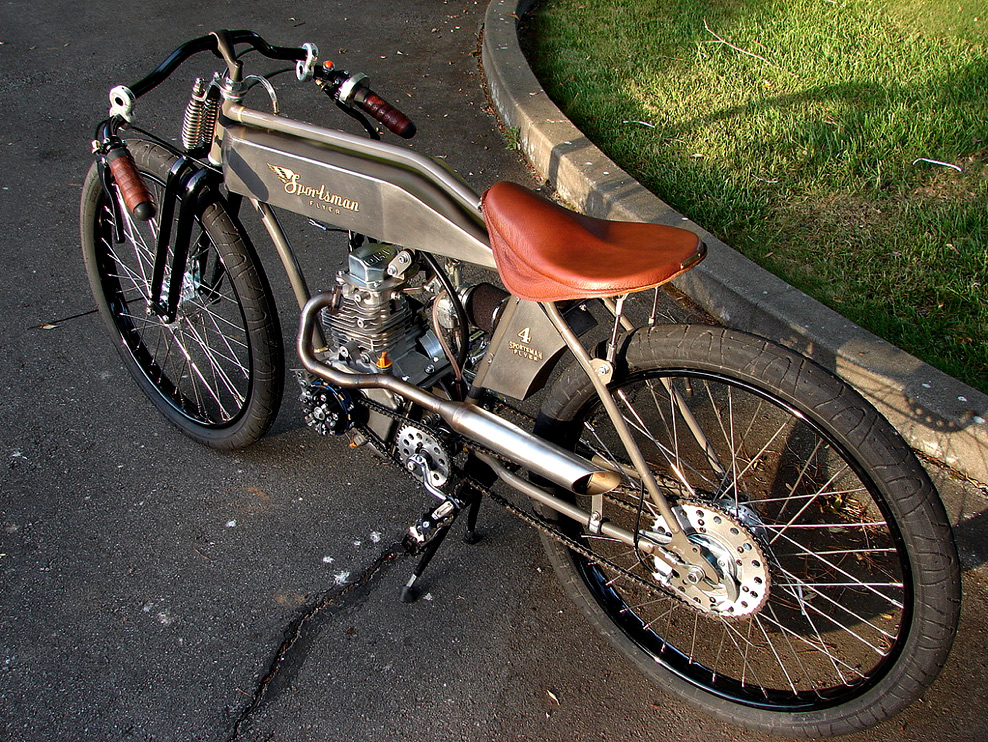 We love Brooks saddles and gear around here at Megadeluxe. If someone wanted to trick out their bike with custom leather work, could that be an option?
Absolutely. I am a big fan of the Brooks saddle on cruiser style builds, but they don’t look right on a boardie. I have been having my own seats covered by a local leather shop. We looked at all these old photos of board track racing style saddles as reference and then came up with our own version. I even have custom brass badges with the Sportsman logo fastened to the back of the seat. Very subtle and very cool. Ever wonder why old motorcycle saddles have the leather flaps hanging off the sides of the seats? Most roads were gravel back then and rocks were easily kicked up and sent flying back towards the riders legs and other valuables carried in that general area. The flaps were basically nut protectors…

Favorite motorcycles of all time?
Either a 1919 Indian Powerplus or a Harley Davidson Peashooter. TZ750’s are pretty cool, too. If you asked me my favorite cars I would have to say a 427 Cobra and a GT40.

How would friends and family describe you on a good day?
My wife Becky would say I am just a big little kid that works too hard. I do have to watch her, she will try to take every new bike for a spin. Friends would probably say I am always building something new.

Phrase you use most around the shop?
“Hmmmm, that ain’t right.” Probably said while tuning yet another carb. You plan everything perfectly, at least you think you do, then when you go fire it up all it can do is run perfectly, right? Yeah, sure…

What’s next for Sportsman Flyer?
I mentioned I liked the look of a Harley Peashooter. I may do something along those lines using my latest drive train. I have a couple full dress vintage style cruisers in the works with swept back handlebars, cruiser saddle, fenders. Beyond that we may do a Bonneville speed record attempt. For us 75 mph would be quite an accomplishment. I’ll let you know how it works out! 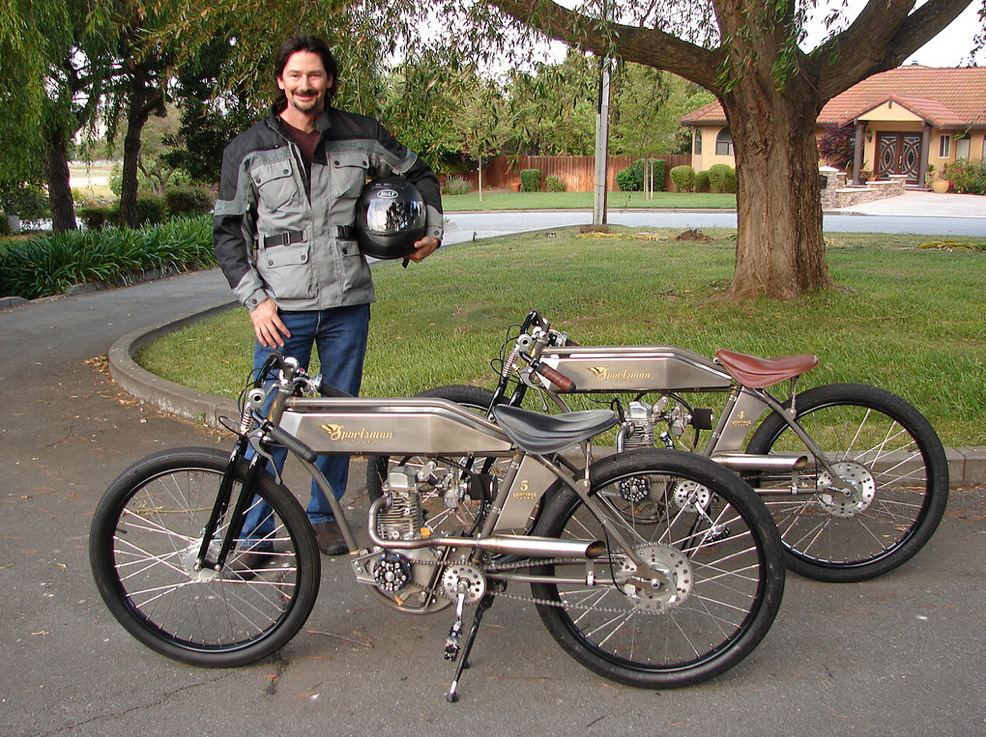