Based out of New Bedford, Mass., Choppahead is at the forefront of new (2001 and on) Triumph chopper scene. In fact, Choppahead offered the first production hardtail frame for new Triumphs. In this interview, owners Jay and Truth expound on the Choppahead’s mission, how they bring the punk ethic to their business, and explain what a badass cafe racer is doing in their lineup. 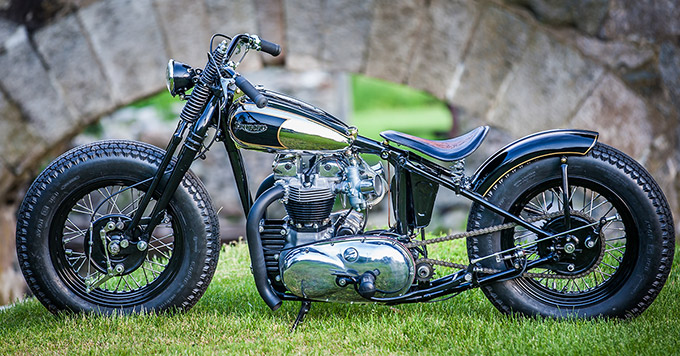 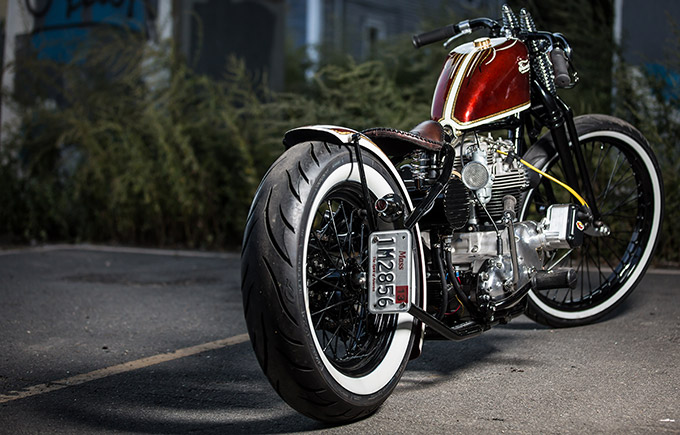 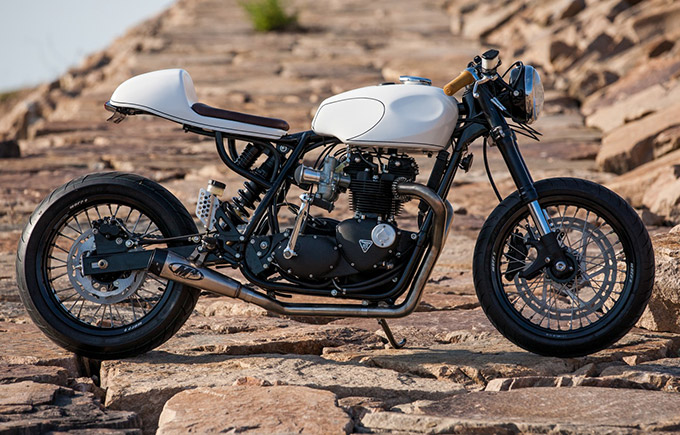 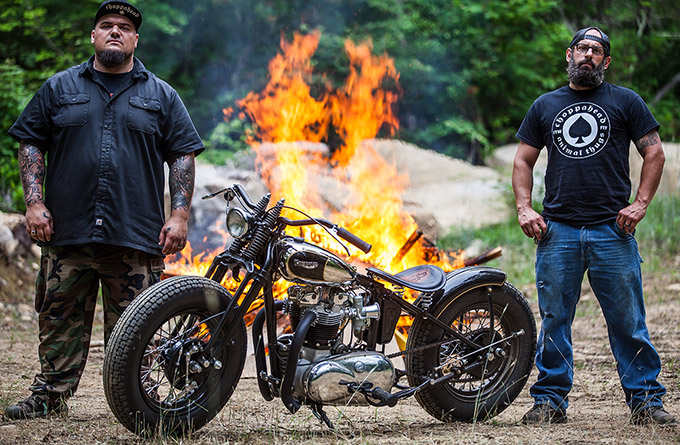 “We are Choppahead…It’s a metaphor for who we are – we’re societal outcasts – shitty, gritty, grimy old punk rock kids but at the same time stand up dudes with class.”
– truth

How did you become interested in building bikes?
Jay: My dad built bikes when I was young. It wasn’t until I was in my mid twenties when I bought a bike he built from my uncle that I knew it would be my calling.

Truth: Plus we were young and poor – we couldn’t afford to have others work on our bikes, so we had to learn to do it ourselves. DIY ethic. We got into Brit bikes because that’s what our fathers had – so we had a genetic leaning towards them. Also at that time Triumph’s were like the punk rock of bikes – no one wanted them and they were cheap. Everyone was lusting after big wide tired $65,000 billet barges in those days. 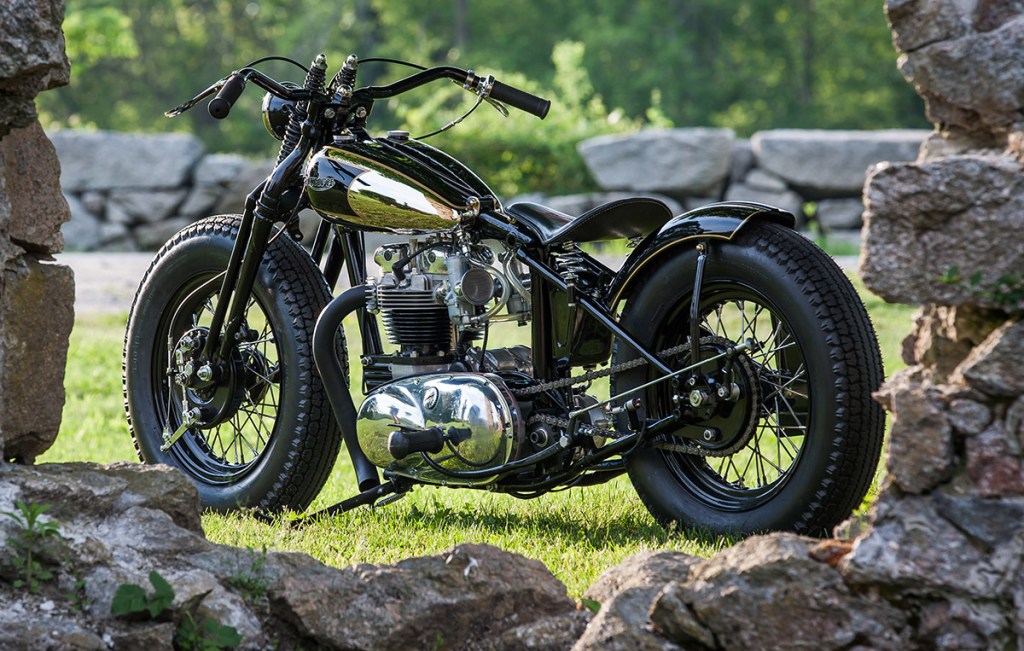 You have a mission statement. But what was the reasoning behind creating a mission statement for a motorcycle shop?
Truth: Because not enough companies do that anymore. Choppahead is an integral part of who we are, it’s not just a business. We stand behind it 110% and take this shit seriously – and are protective of it. There’s too many people jumping on bandwagons to try to make a quick buck. We’ve been a constant presence and like it or not we are here to stay.

Jay: We wanted people to understand who we are and what we do before doing business with us.

You offer, “the first production hardtail frame available for new Triumphs.” How did producing frames come about, and what were the challenges?
Truth: it came about because we wanted to break into customizing modern Triumphs (2001+). But the new frames are clunky, bulky, and ugly (for a custom bike – they are fine for a stock bike because you don’t see them). The geometry on the old classic Triumph frames is more conducive to a good-looking custom bike – so we designed a frame for the modern bikes that has more of those classic lines.

Jay: Mounting the engine and creating a good geometry were pretty challenging. We went through a few prototypes. 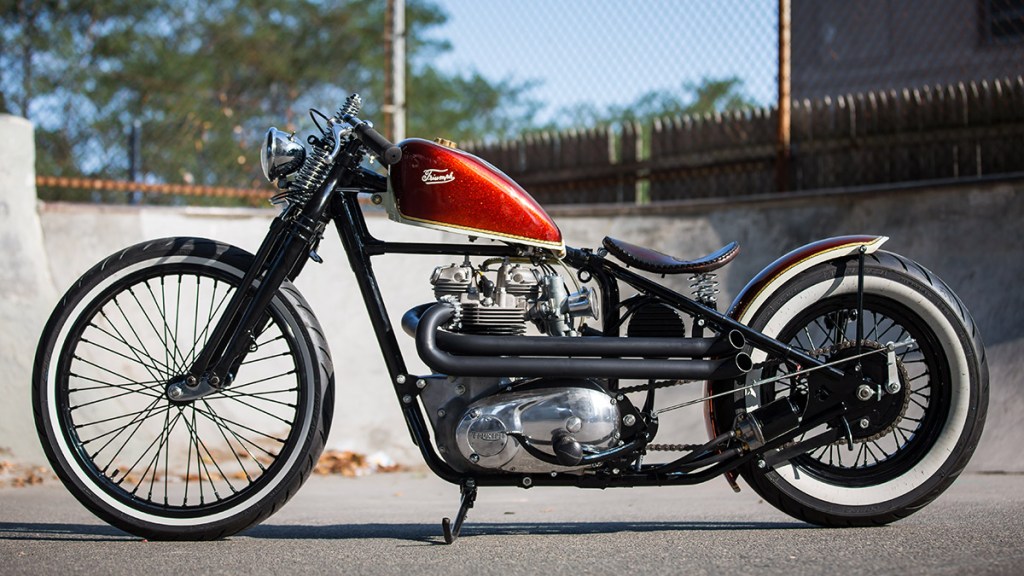 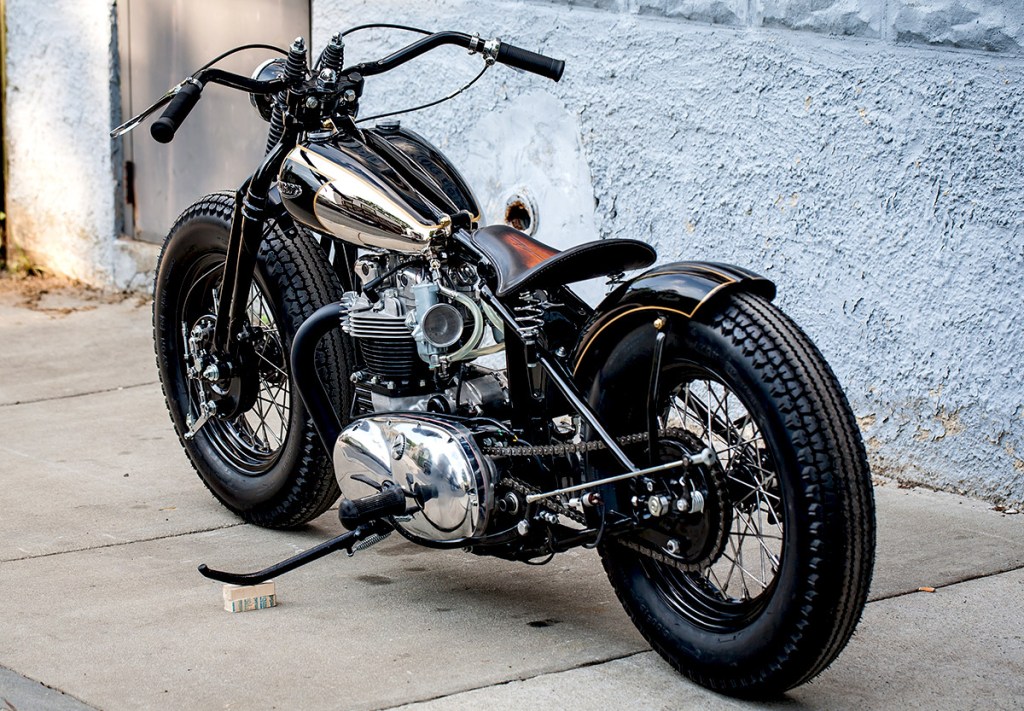 You say, “Choppahead is a raw, low-down, grimy, greasy, dirtbaggy, unsavory clusterfuck of a shop that pulls off some pretty clean and class rides.” Can you elaborate on these two opposite end mindsets?
Jay: If you see the shop you’ll understand. No fancy tools. Our shop isn’t immaculate but the finished product is.

Truth: Like I said before – we are Choppahead, Choppahead is us. It’s a metaphor for who we are – we’re societal outcasts – shitty, gritty, grimy old punk rock kids but at the same time stand up dudes with class. Our shop is the same way. A gem shrouded in chaos!

You and Jay were both in bands, in the “Massachusetts hardcore/punk scene.” How does punk, and its ethic translate to your builds?
Truth: I’ve kind of been addressing that all through this interview.

Jay: For me it’s about sensibility and no frills: old Triumphs aren’t for everyone then you throw on a hardtail and now it’s a rugged bike.

Biggest misconception about the kustom kulture scene?
Truth: That a lot of the “builders”/web sensations/show promoters/lifestyle merch companies, etc out there actually build their own shit, ride, and respect this life. There’s a lot of opportunists out there in it for quick cash and fraudulent glory. 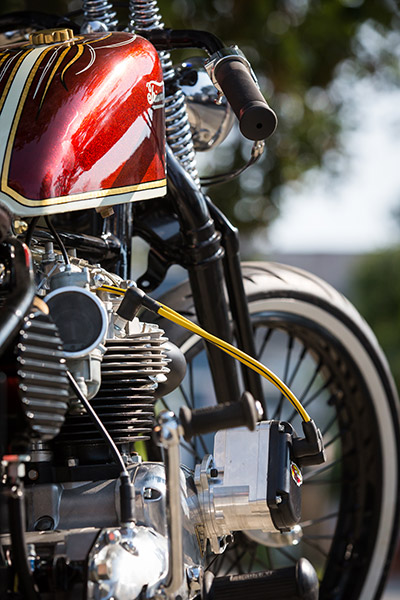 Jay: That Triumph builds should be inexpensive. Yea you can put one together on the cheap, but when you build the whole bike new it’s gonna cost a pretty penny.

Truth: That’s true. Time costs money and we put more time into each build than we are actually compensated for. Yeah, you can find something cheaper on eBay, but when you get it and its a piece of shit you’ll spend more fixing it (or having us redo it all) than if you just started out and did shit the right way from the jump off.

Choppahead is at the forefront of the Triumph chopper scene. What is the allure of classic Triumphs for you all?
Jay: Like I said earlier my dad was doing this shit when I was young. The first motorcycle I ever road was a Triumph when I was 12.

Truth: My father used to ride BSA’s and always had/loved classic British cars. So that’s one aspect of it. Other than that it’s like I said earlier – when we got into British bikes they weren’t cool. So just being an antisocial prick that’s what I was drawn too – my “fuck you” to the biker world as well. Plus they were cheap back then and that’s what I could afford. And of course, Triumphs have their own style and class and it’s good that people are coming around to seeing that. Not to mention that you can’t beat them on twisty back roads! We both have Harley’s as well, they are just different animals. I like all kinds of bikes for different reasons and purposes. 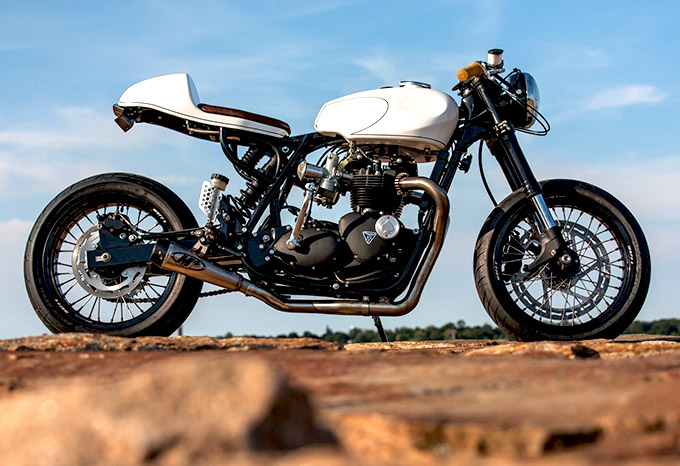 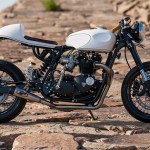 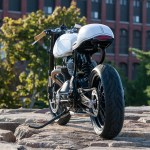 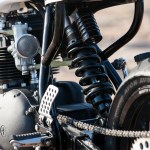 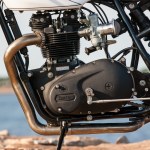 However, you have a cafe racer in your line-up of previous builds – the Pearl Necklace…
Jay: A dude from Boston emailed us asking is we could build a CB750 mono shock cafe. We told him we could do it with a triumph motor. He was down with the ideas we had for the project and out came the Pearl Necklace.

Truth: Plus it was a fun challenge to build one of the first classic British/ modern Japanese hybrid monoshock bikes! We don’t just build choppers and bobbers, we do it all – restorations, desert sleds, cafe racers, mild kustoms, etc.

What’s your process for building bikes – strict pre-planning or making it up as you go along?
Truth: There’s no stringent process – it’s really just dependent on the particular build and what the customer wants. A lot of people contact us and want something similar to a bike they saw on our site or whatever (especially with our classic build series). Then there are customers who come to us with a different vision and we help them refine it and bring it to life. Sometimes, very rarely, we get a customer that comes to us and just let’s us build what we want – and then they end up with something like the Nickel Peeper! At this point that’s what we enjoy the most.

Jay: Our classic builds are pretty straight forward and no real planing. Something like the pearl necklace took a shit load of planning and engineering. We have 2x the man hours in that build compared to say the aces high. Detail on your motorcycles that you spend the most time refining?
Truth: There’s not one particular detail – to us the whole is greater than the sum of all it’s parts. We focus on the whole package and just really want the customer to end up with a bike that looks rad and still performs/functions well. 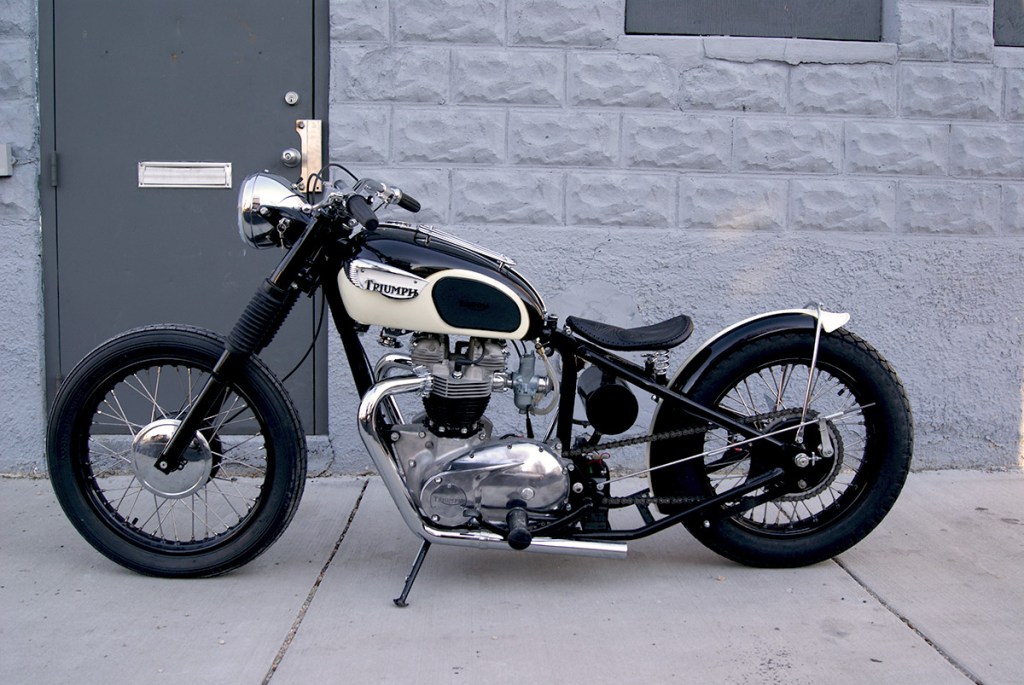 When you first look at a motorcycle (that’s not yours) what do you focus on?
Jay: I’m very judgmental when I look at other bikes and look at just about everything. I do think it’s important for people to understand, someone’s bike is like someone’s wife you don’t disrespect someone’s bike with your negative opinions. Someone spent time on the bike they built and that’s the most important part.

Truth: It depends on where the bike came from. If someone took the time to build their own ride, and it’s their first build, like Jay said, I am not going to disrespect them if I don’t like the aesthetics of it – but will look for obvious safety issues, etc. If the bike is coming from a pro “builder” or shop I really look for the overall look and functionality of the bike more critically. If it’s coming from the factory,my focus is on “how can I make this better!” In general, I appreciate bikes that are thought out and tastefully done that you can ride the hell out of. 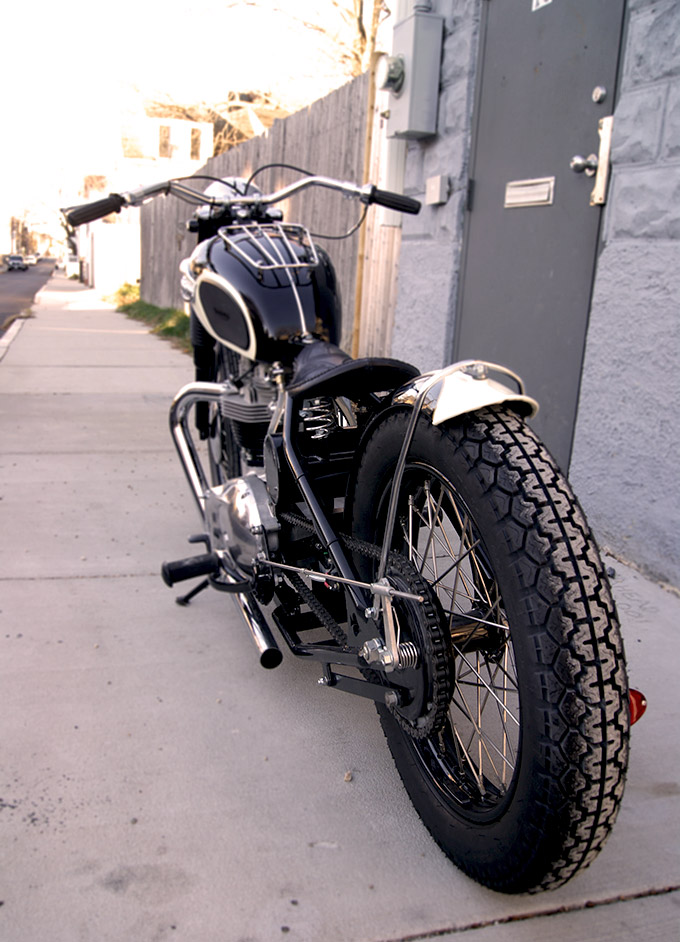 Most inspirational bike you’ve ever seen and or rode? What about it made it so special?
Jay: a lot of the bikes that inspire me are bikes either built as factory bikes in the early days or bikes that are super clean and well designed.

Truth: My first custom bike was a 1964 Triumph chopper. It was raked out with a 12″ over springer that used to skip and bounce on me whenever I took a curve on the highway. Looking at it now, it was a complete death trap – especially when tearing around Boston. But back then I loved it so much and didn’t know any better. And no matter how bad I was white knuckling I always had a smile on when riding it. That bike is what really pushed me over the edge and got me hooked on this shit forever. 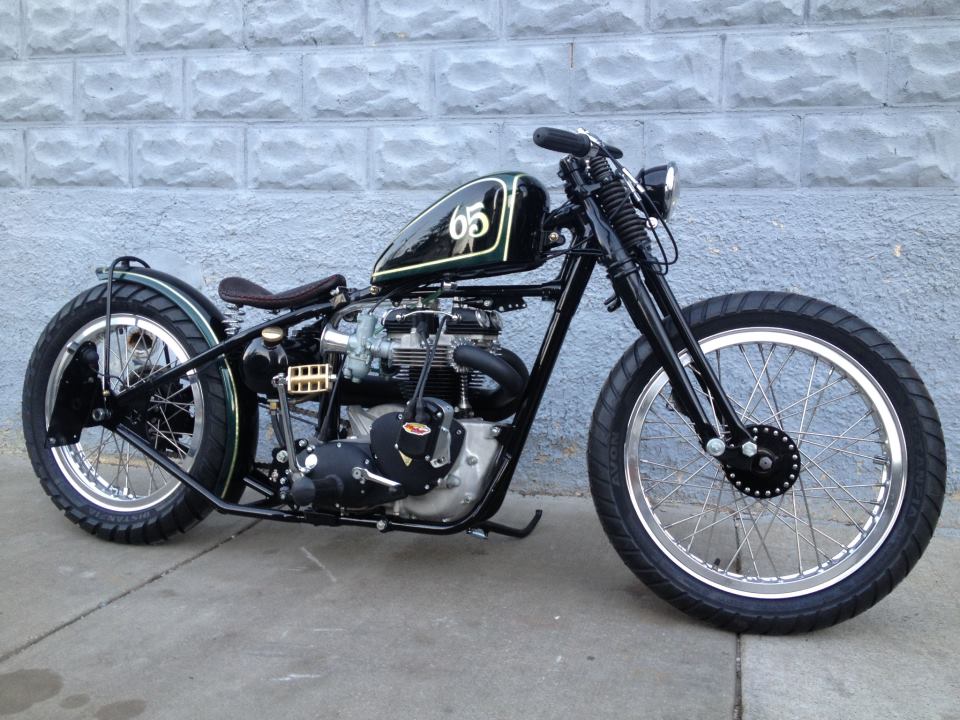 Truth: Depends on what kind of bike you’re talking about. For stock/factory bikes and bobbers I like the 40’s and 50’s – both British and American. For kustoms I like mid to late 60’s early style choppers – like you see in some of the old biker movies. Don’t get me wrong, I can appreciate long crazy stretched 70’s choppers as well! I’m all over the place and can’t pick just one style or era of bike I like.

Best reaction you’ve ever received about one of your motorcycles?
Jay: “I just saw your newest build, I want one” haha.

What music/bands are usually playing in you shop?
Truth: Hardcore, Oi!, D-beat, some metal, and some country. I like driving music that makes me want to both smash shit and be productive. Ringworm “Justice Replaced By Revenge” – this LP does it all!

Jay: Ranges from old hardcore punk and metal to a limited a mount of new hardcore and metal.

Most satisfying aspect about having your own business?
Jay: I think it’s obvious. We do what we want.

Truth: The uncountable piles of money that I have everywhere now. I mean I trip over numerous stacks just trying to get to the bathroom to take a piss. haha! But for real it’s the satisfaction of doing what we want and not owing anybody anything (except the mortgage and utilities)

What’s next for Choppahead?
Truth: Increasing our presence again. We had a couple of quiet years while we were getting fucked with by the city our building is in. Now we’re back with a vengeance.

“I started Choppahead sometime between 2000-2001, Jay partnered on soon thereafter. We had been friends for a long time before that from the MA/RI punk/hardcore and skateboarding scenes. Motorcycles were the next logical step in our loud, fast, dangerous, anti-social and DIY lifestyle.”
– truth