May 29, 2014. It’s with great sadness that we learned that Ezra Caldwell has passed away. An amazing man who lived life to its fullest. Our heartfelt condolences to his wife Hillary, and all of his friends and family. He will be missed.

Former Vermonter Ezra Caldwell on his transformation from dance teacher to bike builder, his love of urban bushwacking in New York, and how he made cancer cry. 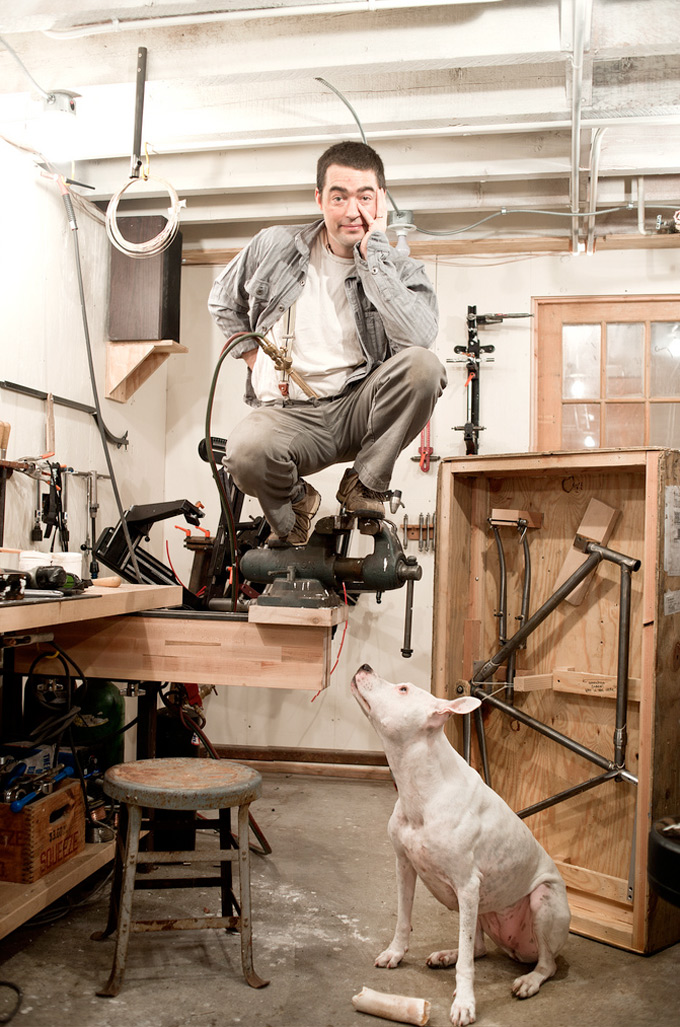 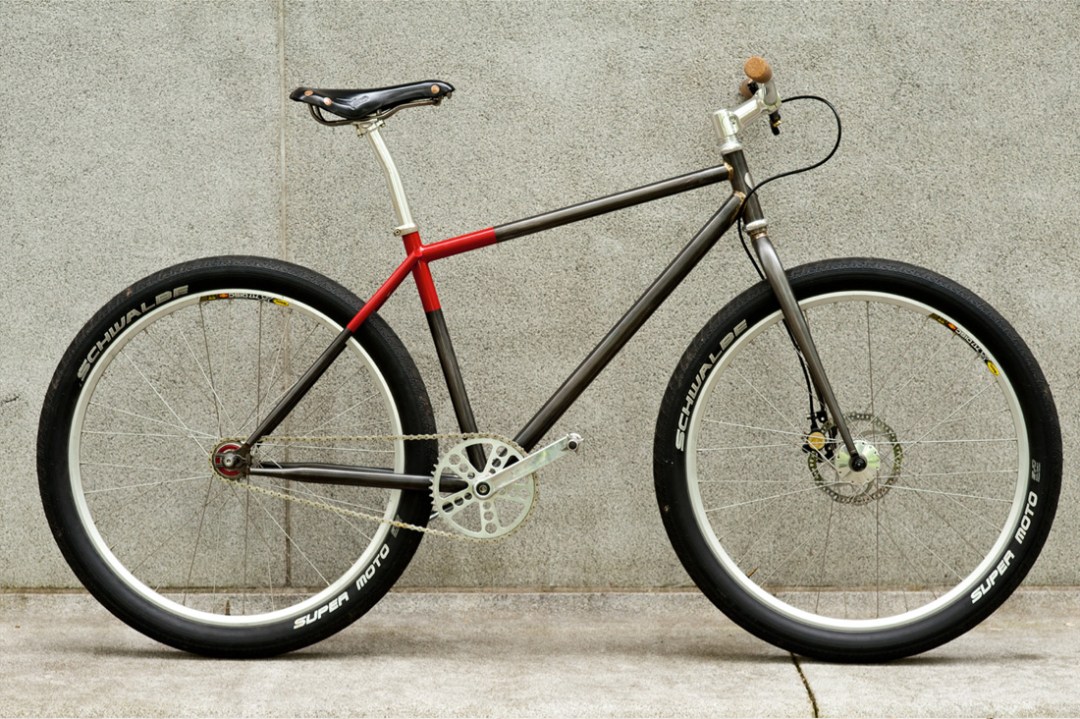 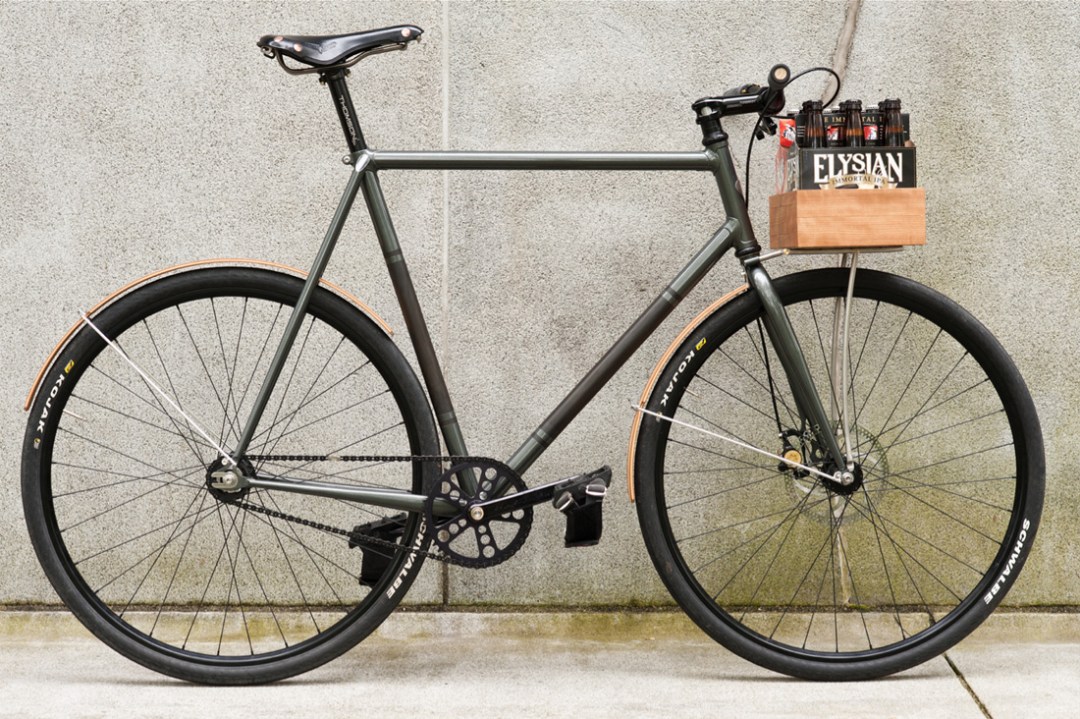 “I try not to do things simply because I CAN, but because I think deep down that they’re beautiful.”
– ezra caldwell

Can you tell me a little bit about yourself?
I’m from Vermont.

Where in Vermont?
Putney. (Named after my dog).

How did you get interested in building bikes?
I had a pretty good gig teaching dance for a bunch of years (?). I always used a bike to get around. Students started approaching me wanting to become commuters. I took it upon myself to use whatever money they could come up with to put them on an appropriate bike. Lots of scouring Ebay, and Craigslist…finding frames that seemed like a good starting point and then building from there. Word got out, and people were coming to me with more and more money, and I became a bit of a bike stylist (gag.) When I finally ran away screaming from the dance world (something I had meant to do for years), bike building just appeared as the obvious next thing to do. To have real control over the final bike, I felt like I had to be building the frame as well as choosing what to hang from it.

What skill sets did you have already when it in came to bike building? Which ones did you have to learn?
I had a pretty decent background in fabrication. Mostly wood working. My father was a woodworker, and I grew up making stuff in his shop. Later, as a teenager, I worked construction around southern Vermont in the summers. Somewhere in there, later on, I took a year off from dance and worked in a cabinet shop in NYC. I had NO experience with metal work, though (besides an elective jewelry class in college). So, the basics of working with machines and understanding joints and learning how to make fixtures that allow you to repeat operations accurately…this stuff was all natural. I had to learn how to braze, though. And had to learn a lot about bicycle design, and just how the bloody things go together. Still learning that stuff, really. 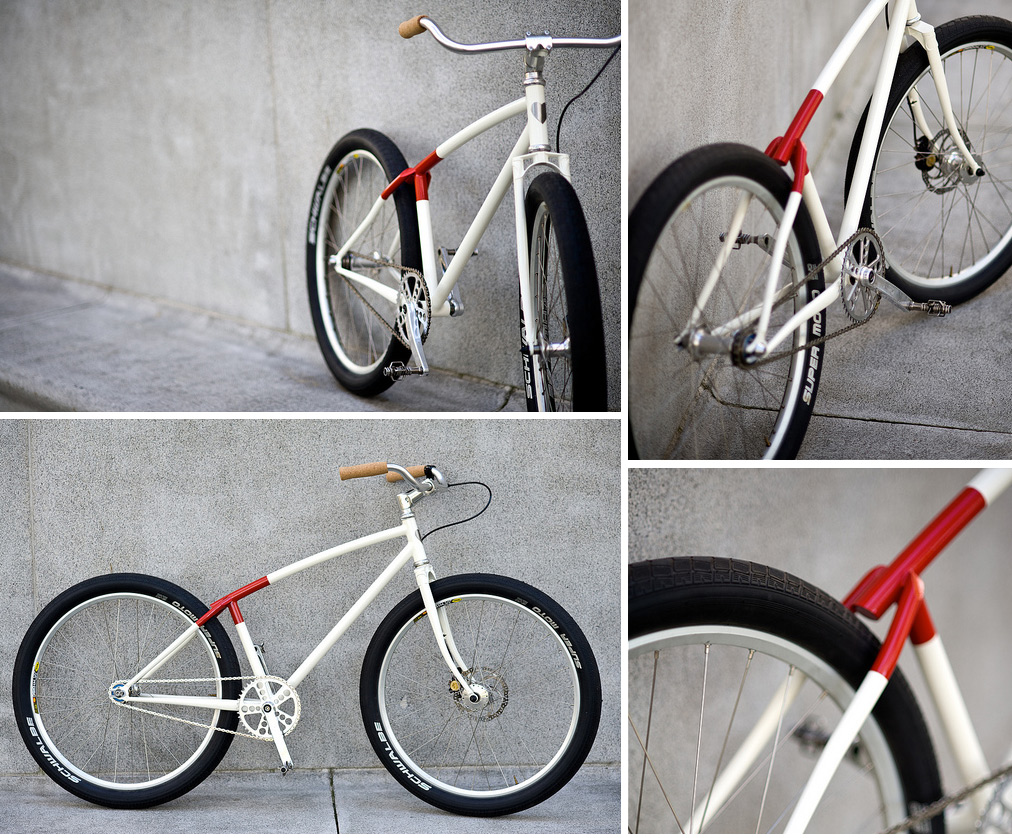 What common design thread do all of your bikes have?
The artists that I admire most are the ones that practice restraint. I try not to do things simply because I CAN, but because I think deep down that they’re beautiful. It can be hard to resist the urge to make design choices that you know will impress, but it’s my goal to avoid that urge.

Easiest/hardest thing about owning your own business?
It sucks. My boss is disorganized…forgetful…usually late…AND a total hard-ass. The janitor is lazy. 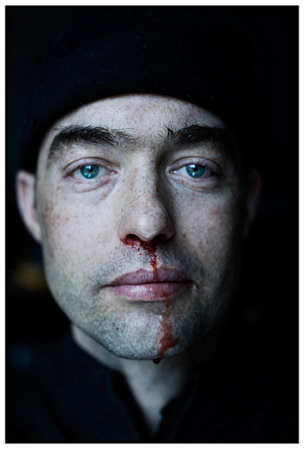 You were diagnosed with cancer back in 2008. You’ve been very open on your blog with how you’ve dealt with cancer. How did that decision come about to share your story?
I got my phone bill about a week after diagnosis and I had gone over by 1300 minutes. I decided that having a blog where I put all the pertinent information was probably a good idea. Just one place where any developments would be posted. I’m not sure how or when it morphed into such a personal journal, but the whole process has been very cathartic and helpful.

What has been the reaction of those who have read your blog?
I think that a lot of people are really afraid of getting sick…or maybe that’s symbolic, and they’re really more broadly afraid of things that are beyond their control. To see someone dealing with that loss of control in life, with apparent calm is comforting perhaps. The thing is, there’s nothing unique about my behavior. A lot of people facing crisis deal with it very effectively (much to their own surprise) they just don’t talk about it so much!! A lot of people write to me because they’ve just been diagnosed, or a friend has, and they say that the blog has helped them cope with it/understand it etc.. And if it has had that effect, I’m thrilled.

How has having cancer changed you, and how are you feeling nowadays?
Well…to begin with, I don’t poop the way most people do anymore! I have a host of aches and pains that I didn’t have before going through a cumulative year of chemotherapy. My short term memory has taken a hit. I am afraid of recurrence. I’m tired. My short term memory has taken a hit. I’m listless and depressed. Yet somehow, the last 4 years have been the best of my life. I can’t explain it. Except to say that all the cliches are true…when you face a potentially terminal illness, you realize in a very stark way what is true for everyone: Life is short. It can end unexpectedly. Don’t get caught up in the small stuff. 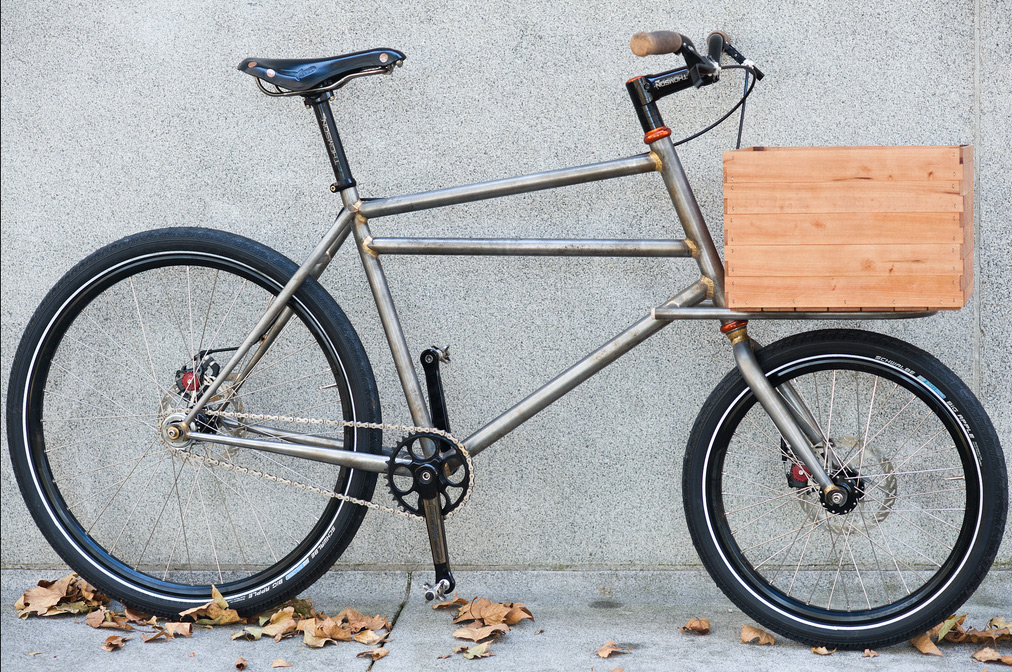 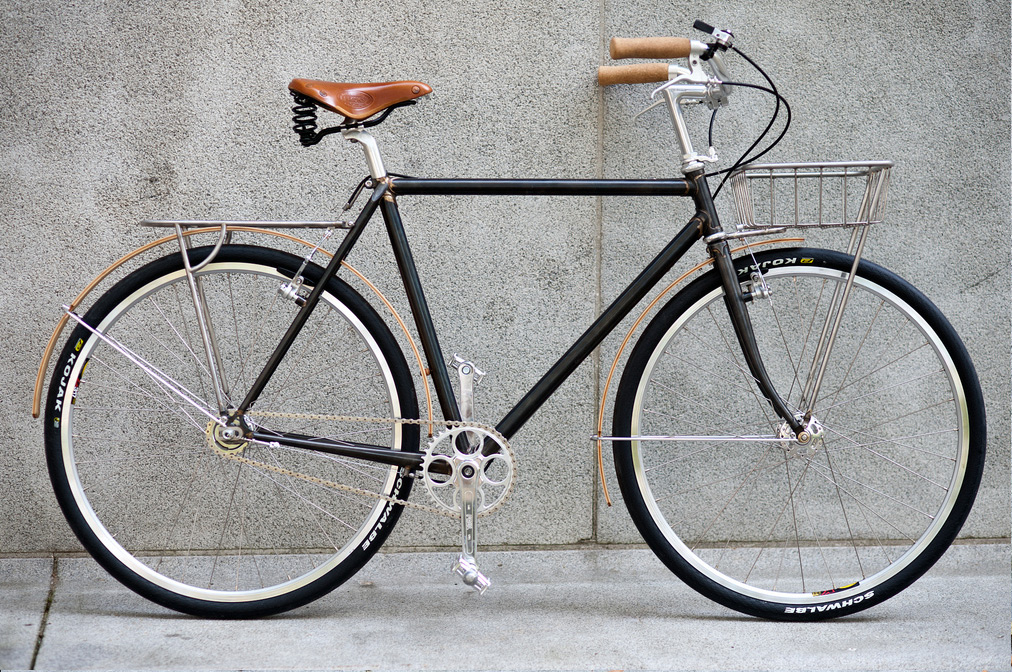 Best compliment you ever got about one of your bikes?
Hard to say…but someone did once send me a picture of their new bike in bed with them. 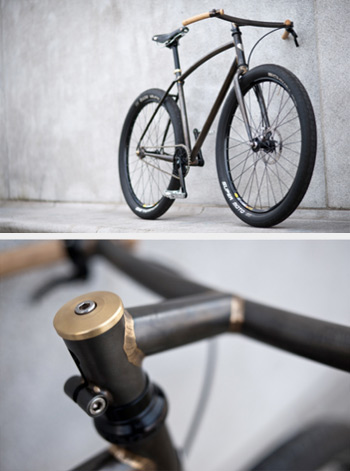 The TF5 (Thunder-effer 5) is getting some major traffic here at Megadeluxe. Can you tell me the story behind this bike? The detail on the design is spot on.
The owner’s wife wanted to get him something really special for their anniversary. She contacted me to see if I had anything ready to go. I explained that I really built them to order, not on spec, and that part of the thrill was being involved.
So I sent him an email on their anniversary, saying “hi. I’m Ezra. I build bikes. Your wife thinks you should have one. Let’s talk.” He turned out to be really groovy about the whole thing and asked me to build whatever was on my mind, more or less. There were some very loose guidelines. Single speed. Front disk. And he sent me a picture of a gritty alley that he had taken on his last visit to NYC. Cryptic, but I took it and ran. 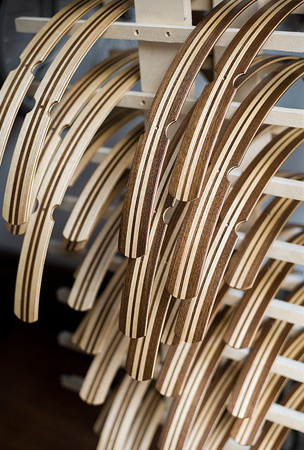 Where did the idea of designing and selling wooden fenders come about and what’s your process?
Like I said, my dad was a wood worker. I grew up in a wood shop. I helped him every once in a while with the glue up of some bent lamination chairs that he made. When I started getting all geeky about bikes, it occurred to me that bent lamination would be a great way to make wooden fenders. So I tried it out. Made the mistake of posting some pictures on the internet. At first I just sent them to people whose bikes I liked…random act of kindness style. But I started to get lots of requests for them, and at some point made it a business. This was before I started building frames. Once I started building frames, I had my hands a little too full to be making a la carte fenders as well. I’m still trying to figure that out.

Detail that you spend the most time refining?
I guess I really like seat stay caps. I almost always do the same style, but between the length, the angle, and the exact location in relation to the seat cluster, there seems to be pretty endless variation. Each bike is different, and I think that seat stay caps have a lot to do with the bike’s identity. Whoa. GEEK!

How do you want your bikes to feel on a ride? (Or, how do your bikes ride?)
Oh GOD!! Are people riding these things!!

If you could build a bike for anyone it would be for…
Paul Newman. That one he rides in Butch Cassidy and the Sundance Kid might be due for an update…Sadly he’s dead. I’m heartbroken. 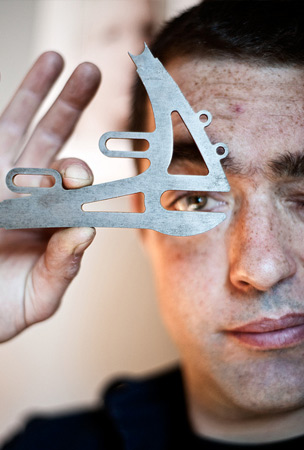 Phrase you use most around the shop?
Probably can’t say it here.

If I had more time, I would…
I hate to admit that I’d probably just do more of the same.

What do you like best about New York and the bike scene there?
I grew up in a rural town of 1200 in Vermont. For me, the most wonderful thing about the city, AND the bike scene here, is the sheer diversity.

Unknown place in Manhattan that you like to hangout?
Not telling.

You like to eat and cook, and your dishes look tasty. So, garbage dinner, tell me how you came up with this?
When I was growing up my mom would occasionally clean out the fridge, throw it all in a big pot with some water, and call it garbage soup. My wife hates to throw away food, so sometimes when the fridge is particularly full of odds and ends, I’ll force myself to Iron Chef it with whatever’s in there. I serve it up and call it garbage dinner. Sometimes it’s really good! It makes me try strange new combinations and techniques. A good culinary work out.

Your favorite place to grab some food in your neighborhood.
I’ll be honest. I almost never eat out.

After seeing your food photos on your blog, I can understand that. What’s your favorite dish to prepare?
I lived in the North of England for a year. While I was there, I ended up being the chef at a Thai restaurant a couple nights a week (another story entirely!). So I make a fair amount of Thai food.

Best place you like to ride your bike in NYC?
I like urban bushwacking. I most enjoy heading north from my house in harlem, up into the Bronx.

What’s next?
I want to learn to manual a BMX bike. I guess I need to build one first.