Photographer & Filmmaker Gunther Maier on his creative calling, his love of motorcycles and cars, and his quest for a world record at Bonneville. 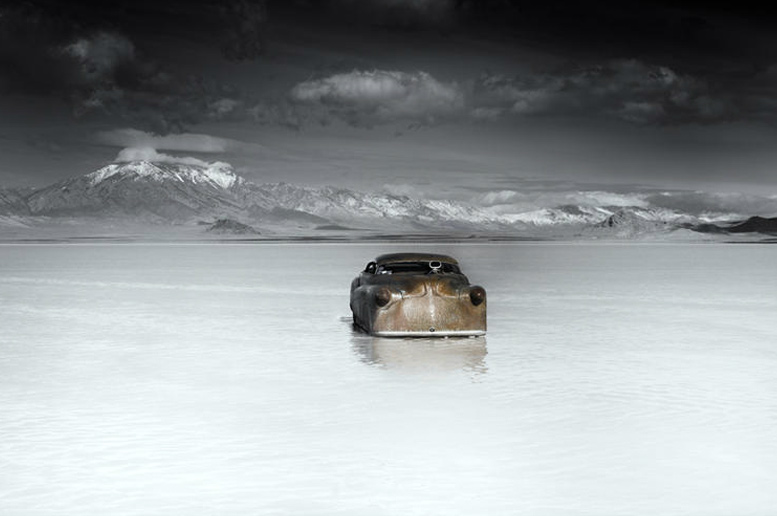 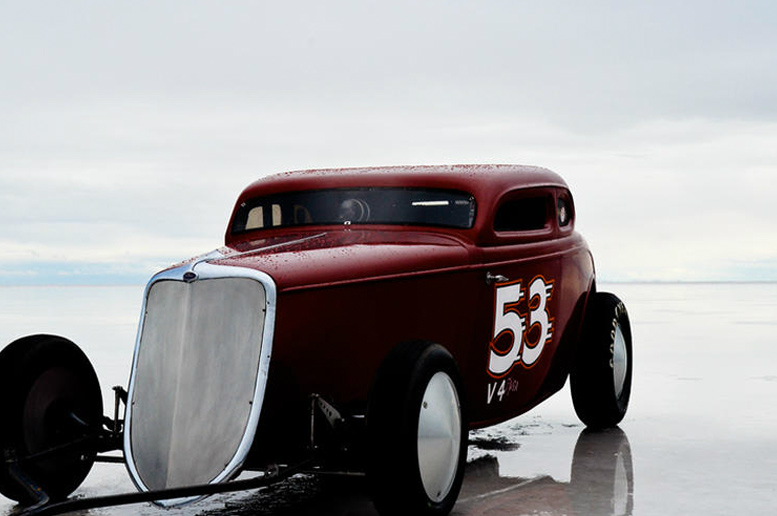 “Connection is so subjective, but if you think of what draws you into a photograph it’s never the obvious. I think photographers have a way of seeing into the soul of their subjects and shining a light on truth and essence that might otherwise be lost to the naked eye”
– gunther maier

About Gunther Maier:
I have an insane love for motorcycles, cars, and things that are made well. I’m sure this is rooted in my heritage.

I grew up in Ulm, Germany. I never made it to the Bauhaus school, but I did have a taste of the second coming of Bauhaus at the “HFG” Hochschule für Gestaltung in Ulm, Unfortunately, the year I applied the school closed due to lack of funding.

I decided to become a photographer’s apprentice. I spent three years learning the skill, hanging out in the darkroom for hours and hours after work developing my own photos and experimenting with the art- fully supported and encouraged by the company I worked for at the time.

From there I went back to school for Design and basic ad skills in Stuttgart. Then I packed my bags, moved to NYC and snagged a Mad Men job with a German ad agency. I created ads and TV spots for Mercedes-Benz, Porsche Design and Jägermeister, just to name a few. I’m proud to say the Mercedes-Benz work is now a part of the permanent collection of the Library of Congress. Later I opened my own agency in Philadelphia with 3 other partners and run it successfully for almost 10 years. 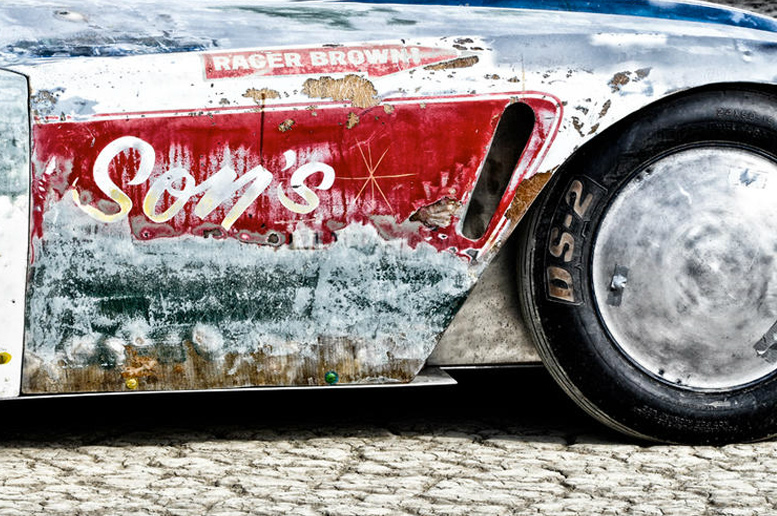 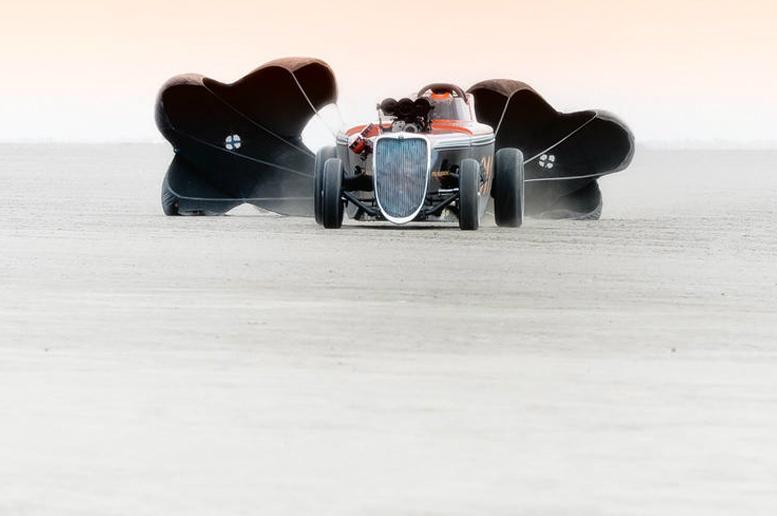 There’s this saying on your site, “To begin is easy, to persist is art.” I’ve never heard that saying before, but it’s so true.
Yes…it’s one thing to have an idea, but quite another to commit the time and energy to bring it to fruition. This is especially true of the right-brain-minded, those people fueled more by passion than process. The art happens when we allow the process to run it’s life cycle; when we don’t give up; when we continue to see a vision through to its natural end. All the while hoping that end is just the beginning.

So, I looked it up, and it’s a German proverb.
My father loved to make use of proverbs, and actually that one was used in our house a lot…. 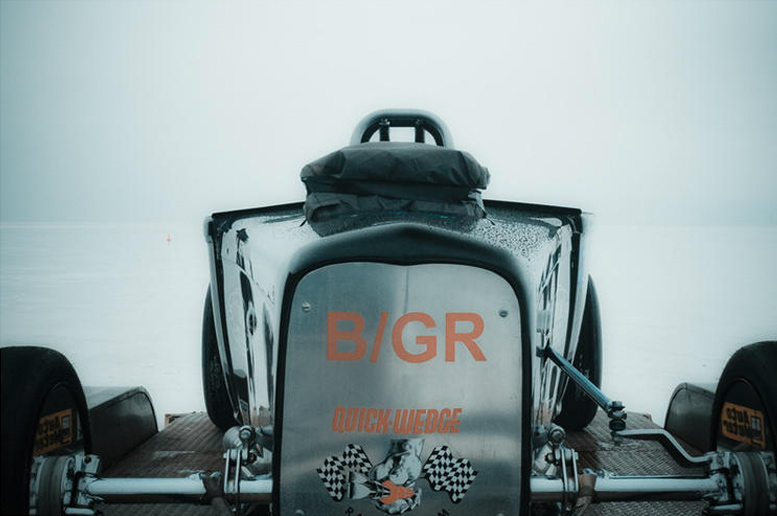 Another quote from your site, “His rich German accent, clothed with his free-spirited American attitude, hint at his uncanny ability to transcend boundaries and origin.” Can you elaborate about your acquired “American” attitude?
My strict German upbringing taught me to follow the rules, don’t cross the line (that’s a famous Mazda television spot)…so you can imagine how delighted I was to land in America where success is measured by the rules you break and lines you cross.

My love for Germany runs deeps, but I never had a much of a problem assimilating to the freedom and ease of an American lifestyle. 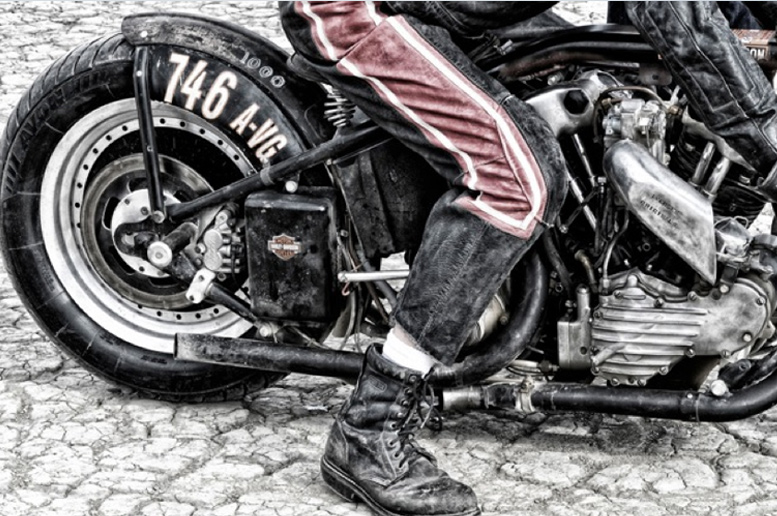 “You never know where to be, you just know that you need to be in the moment. You need almost step outside your own skin and be aware of the energy, the circumstances, the opportunities to see what’s happening above the surface and below and lucky enough to freeze it with your camera.” 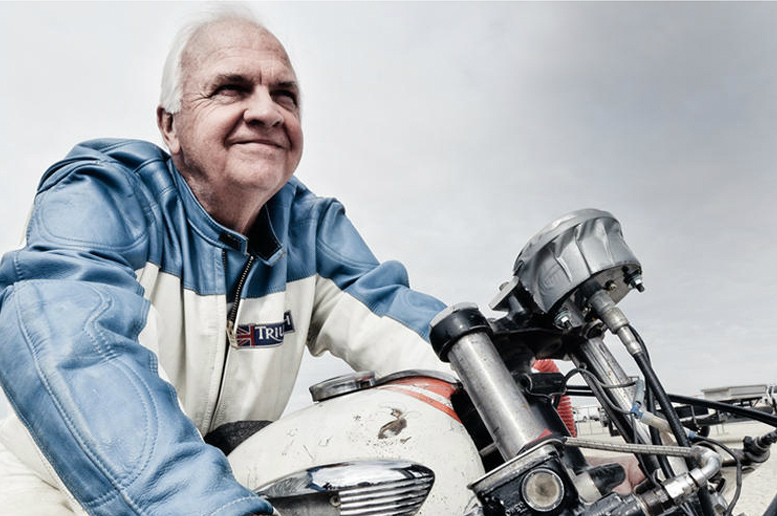 I’m guessing that for you, photography is somewhat of a calling. How did that come about?
When I look back now I can connect many dots—my time as a photographer’s apprentice, my design and ad schooling, my career as an Creative director (art)—each of them somehow connected to learning or developing photography skills though I didn’t necessarily realize that was happening at the time.

Creative directors are charged with bringing their creative vision to life by finding the right team to execute your ideas and push it to a limit you’re not even sure exists.

I think all of that experience was just a training ground for me…because now I know how to get from point A to point Z whether I’m clicking for myself or a client. 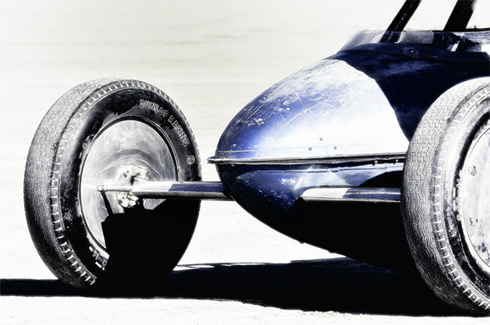 As you see it, what qualities does a good photographer possess?
The most important is the ability to see what the rest of the world is missing, and of course the wherewithal to capture it with a camera.

Bonneville Salt Flats…what’s it like, and why do you like to shoot there?
The salt creates a big, vast, white canvas. It’s just completely blank. You need to concentrate on the one nugget no one else will see, beauty of minutia. It’s a face concentrating before a race, a reflection in a hubcap, the weather’s mood…

Capturing the moment – how do you know where you need to be for a particular shot?
You never know where to be, you just know that you need to be in the moment. You need almost step outside your own skin and be aware of the energy, the circumstances, the opportunities to see what’s happening above the surface and below and lucky enough to freeze it with your camera. 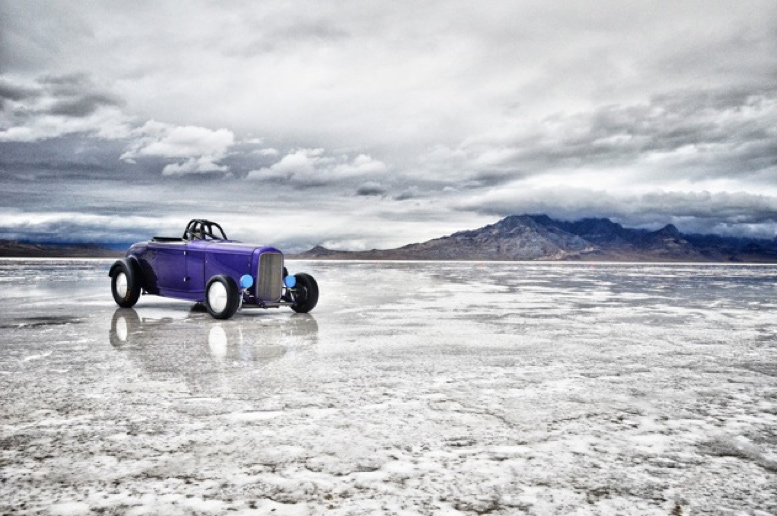 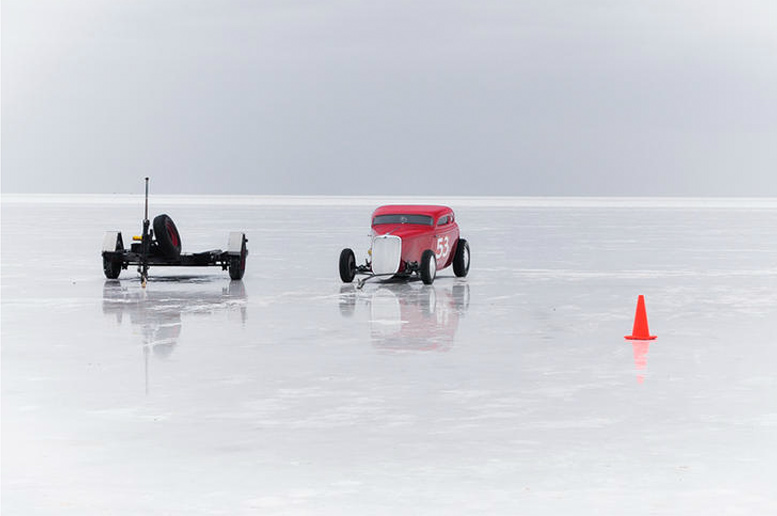 Have your best shots come from precise planning or perfect accidents?
Both, really, but each scenario has different qualities. Sometimes all the planning in the world leads to an average shot.  For instance, a shot at sunset on the salt takes a lot of planning, but can lead to just an average photo. On the flip side, going out to the salt during the rain, as I did, led to a lucky shot —there was a break in the weather and the cars that were there were in a foot of water, there wasn’t a soul in site. The photos were incredible.

Who is your all-time favorite photographer and why?
There are two photographers who inspired me. Joel Meyerowitz for his ability to paint with light, and Sebastião Salgado for his brutal truth in his black and white work about gold miners in Brazil.

Difference between a good shot and a great shot?
A good shot is pleasing to the eye. A great shot grips you from an angle you did not expect. 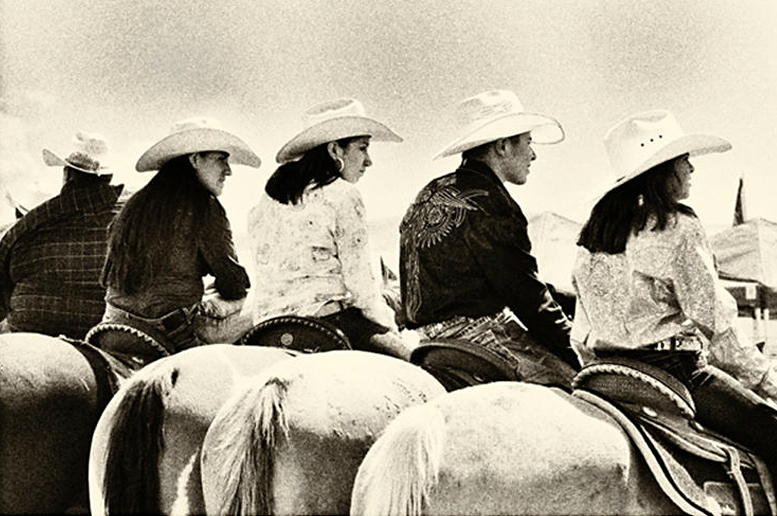 What’s been the most challenging shoot you’ve ever done?
I once photographed a cowboy on his bucking bronco at a small-time rodeo. As he was coming toward me, I captured the fear in his eyes moments before I watched him fall off and get hit by the horse (who was also in fear). I later learned that this was the cowboy’s last ride. He died from a head injury.

Looking at images later that day I came across a photo I took of him teaching his young son (maybe 5 or 6 years old) how to band-aid his hands to hold onto the sheep he was riding.

That’s so tragic…I can’t imagine how it would 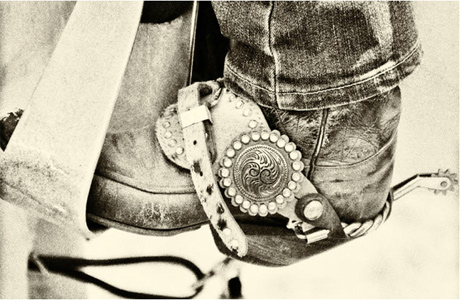 have been to see those photos of the father with his son. So I have to ask…did you give those photos to the family, or was it too much at the time?
Yes, I made a special print and gave it to the rodeo organizers to give to the family.

Your favorite camera and gear set-up?
Right now I use a Nikon 700 with a 17-35mm lens because it gets me close to my subjects.

You have 30 seconds to leave for a shoot – and can only bring one camera and lens — what would that be?
My iPhone.

“Photography tells a story with one frame. Filmmaking tells the story with many. While each craft is at opposite ends of the spectrum, photography reminds me that each frame in the film needs to work hard for the end goal-​which is the story that needs to be told.”

How long have you been making films? How does photography inform your filmmaking?
I guess you could say I started making them in the ad world when I was creating and directing TV commercials. Now I’m still creating the concept, directing and executing…the only difference is that I’m taking longer than 30 seconds to tell the story.

Photography tells a story with one frame. Filmmaking tells the story with many. While each craft is at opposite ends of the spectrum, photography reminds me that each frame in the film needs to work hard for the end goal-which is the story that needs to be told. 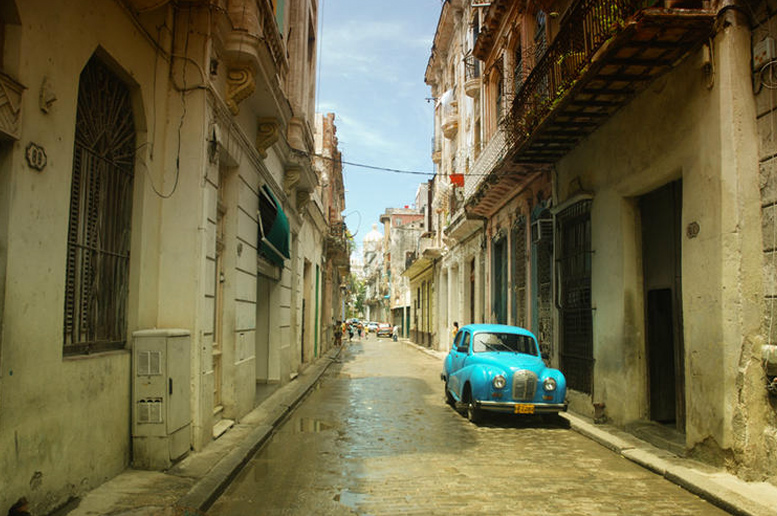 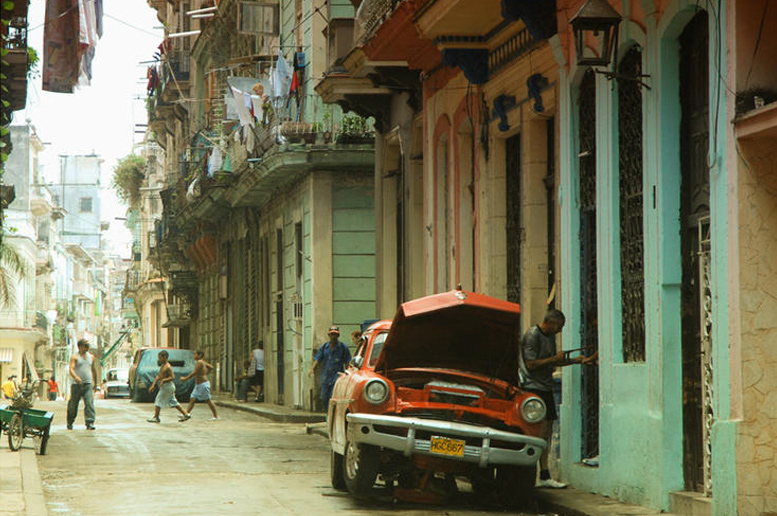 You traveled to Cuba with Victor Alvarez to make a documentary. Can you describe what that was like?
Cuba is a time capsule where you’ll find more than 50 years of beauty that’s largely untouched by modern civilization. Filming Victor’s return was very emotional and inspiring. The people I met were the most open and friendly people you can meet-especially considering their living conditions just 90 miles off our shore. Hemingway knew why he loved this island and its people.

How was it seeing all those classic cars still driving around in Cuba?
First day I went nuts, because almost every corner they is a 50+ year old american car, some of them are in good shape and some of them just barely hold it together. But once you see the bikes…you go nuts. I am actually planing a coffee table book of “Harlistas Cubanos” (book is ready to go, just need a publisher) and plan to go back to Cuba in June. 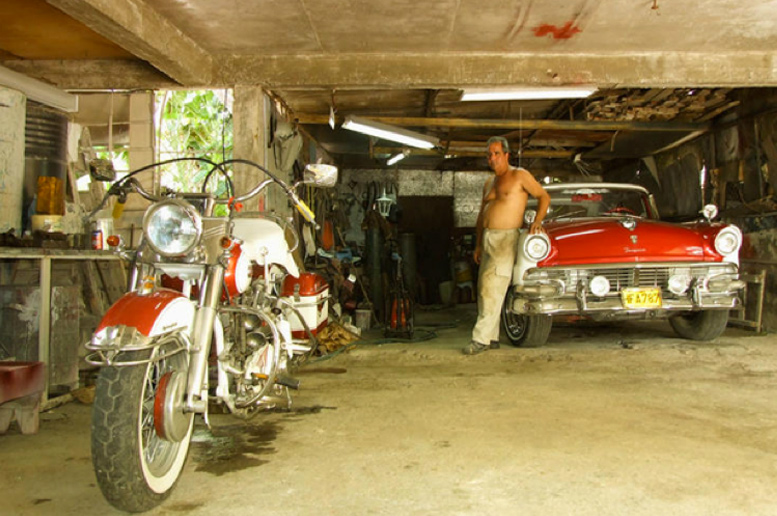 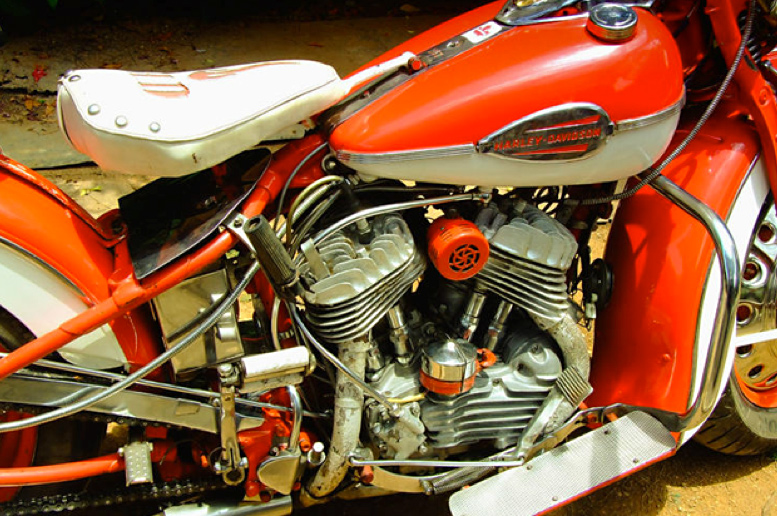 You live in Santa Fe, what is it about living there that you enjoy so much?
The easy, relaxed lifestyle, the rich culture, the wide open roads that welcome my Harley, the bright blue skies almost every day of the year and the stark high desert landscape. What’s not to love?

What kind of Harley do you have? Best road to ride your Harley?
I ride a Heritage Deluxe and love the High Road to Taos, having lunch, continuing on the “Enchanted Circle” to Red River and returning to Santa Fe on the Low Road along the Rio Grande. You can’t beat that day trip! I also arrange guide Harley Tours through the Southwest through my other business called “Ride the Dream.”

Best place to get New Mexican food in Santa Fe?
The Rooftop Cantina of the famous Coyote Cafe downtown at sunset with a cold Corona.

How would friends describe you?
You’d have to ask them…but I can seem them say: passionate, hard-nosed funny, committed? 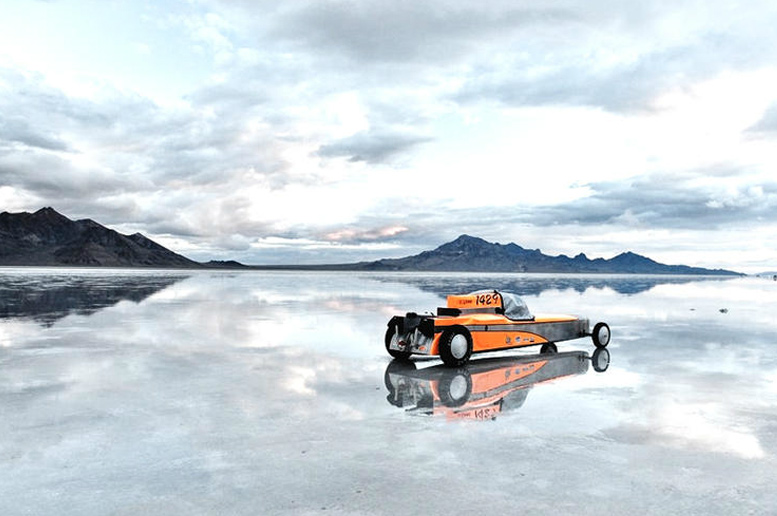 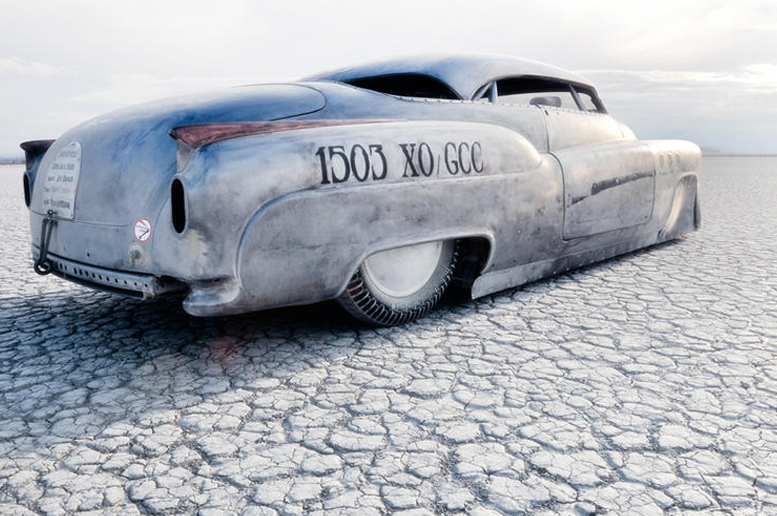 Your idea of the ultimate day?
Breakfast at Harry’s Roadhouse, two and a half hour ride up to Pagosa Springs Colorado, soaking in the Hot Springs for the rest of the day and night and go to bed with a smile on your face.

What’s next?
Building a replica Indian Boardtrack Racer to go for a Land Speed Record at the Bonneville Salt Flats this year with the number 35, which was Burt Munroe’s lucky number when he honored the gods of speed!

That’s quite an epic undertaking. How long have you been planning to do this and what was the spark? Are you going to ride the Indian, and what’s the record you’re looking to break?
After shooting the last years in Bonneville with my friend Jeff Brock, recording his speed runs in his ’54 Buick, I came across this guy in Gilmore, CA, (the old Indian factory) who builds these very cool looking street replicas. We started to talk and one thing let to another to build a bike to go after a speed record. I will ride the Indian Sportsmanflyer. The record we go after is between 75-100mph, which is quite a deal for a bike this size. It took me also some time to convince the SCTA (Southern California Timing Association) to let me run it.