It used to be hard for me to look at a BMW K100 and see the possibilities. It just never did anything for me. But with this outstanding rebuild by Marc Robrock, I stand corrected. This BMW was featured on Bike EXIF awhile back, and Marc is starting a new company called motofication. Can’t wait to see what the future holds for Mr. Robrock. 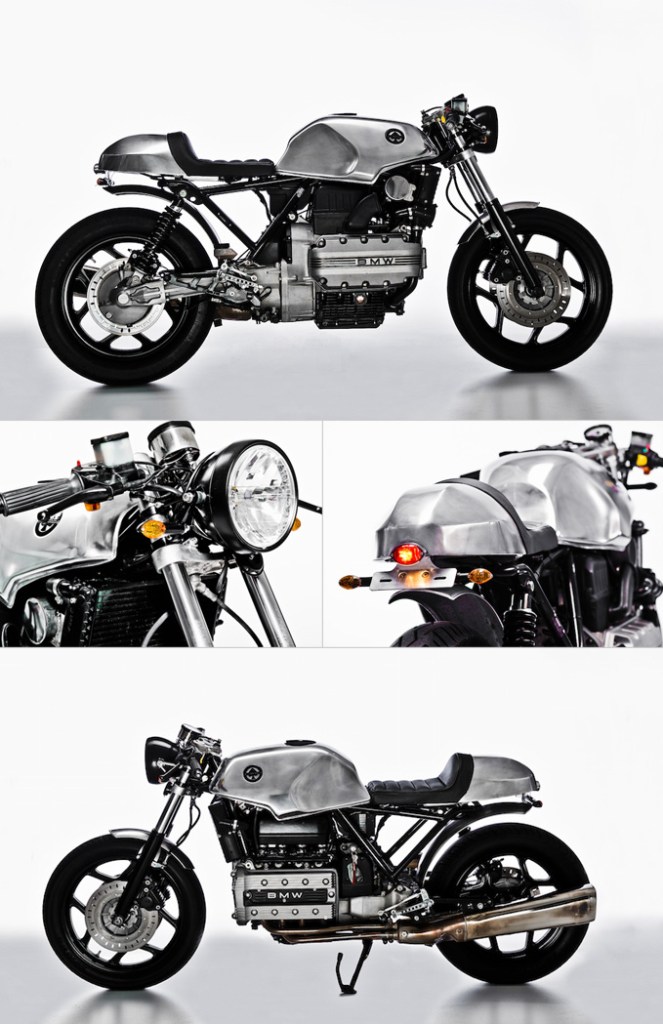 “I remembered the BMW K100, a bike that was so expensive, when it first came out, you could have bought a car for the same money. Today I have to admit, it wasn’t the ugliest bike, but there are some forms of a K100 that are really not nice.”
– marc robrock 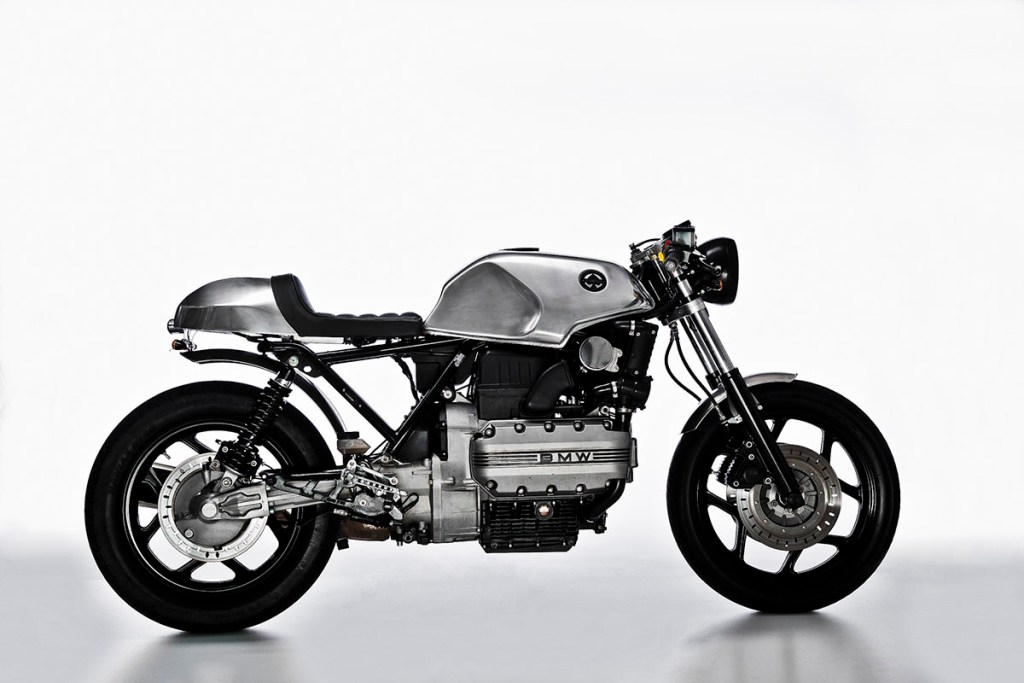 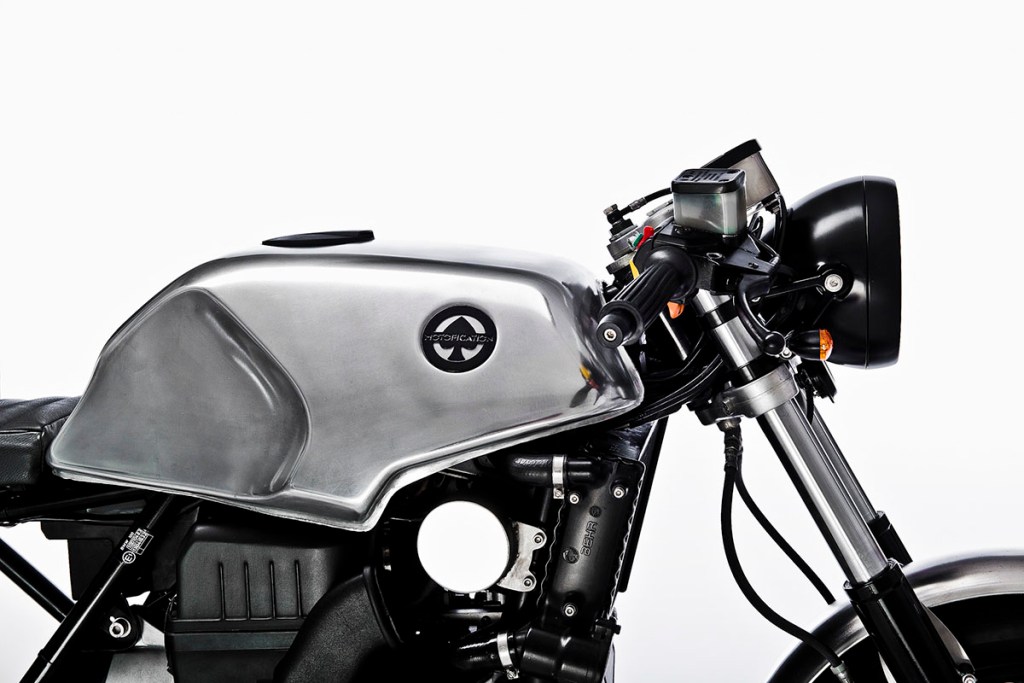 Marc Robrock is a metal worker and blacksmith located in Nuremberg, Germany. “I started my own “rock-shop” (from Marc Robrock, which is my name) called Meister Robrock.”

When Marc was 18 years old, he started riding enduro motorcycles, and owned an assortment of bikes: Yamaha XT600, Honda NX650, and a Triumph TT600. After 10 years of dirt riding, he switched to street motorcycles – and started off with a Kawasaki 1100.

“Now that I have my own shop” says Marc, “I thought it might not take a wizard to rebuild bikes, and I started to try on my own. I have an employee who is strong in electrical things and a perfect craftsman as well.” 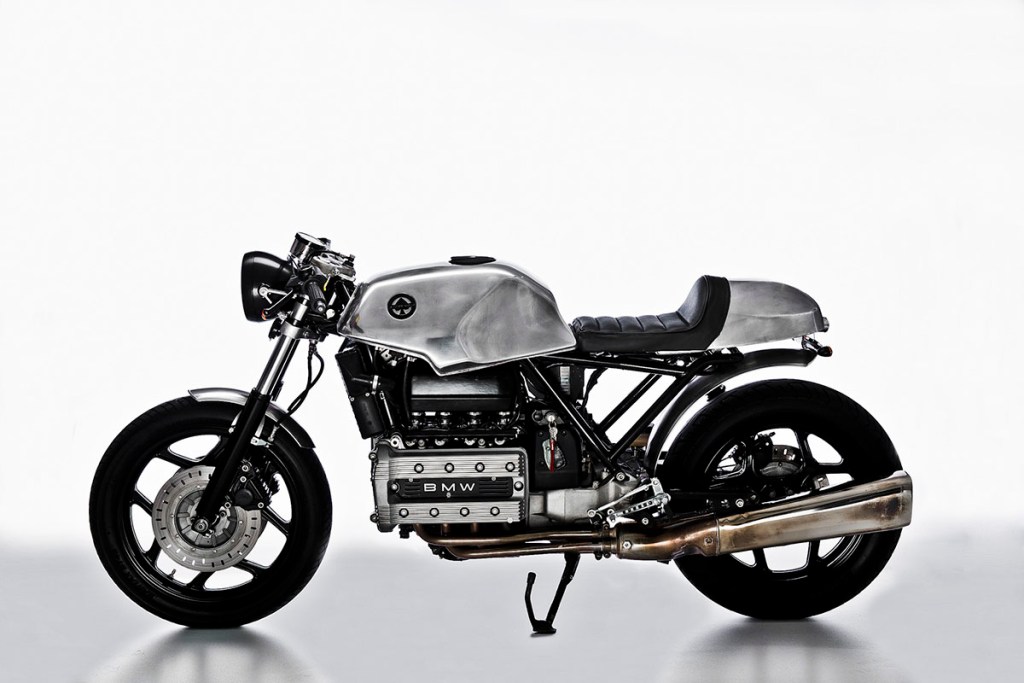 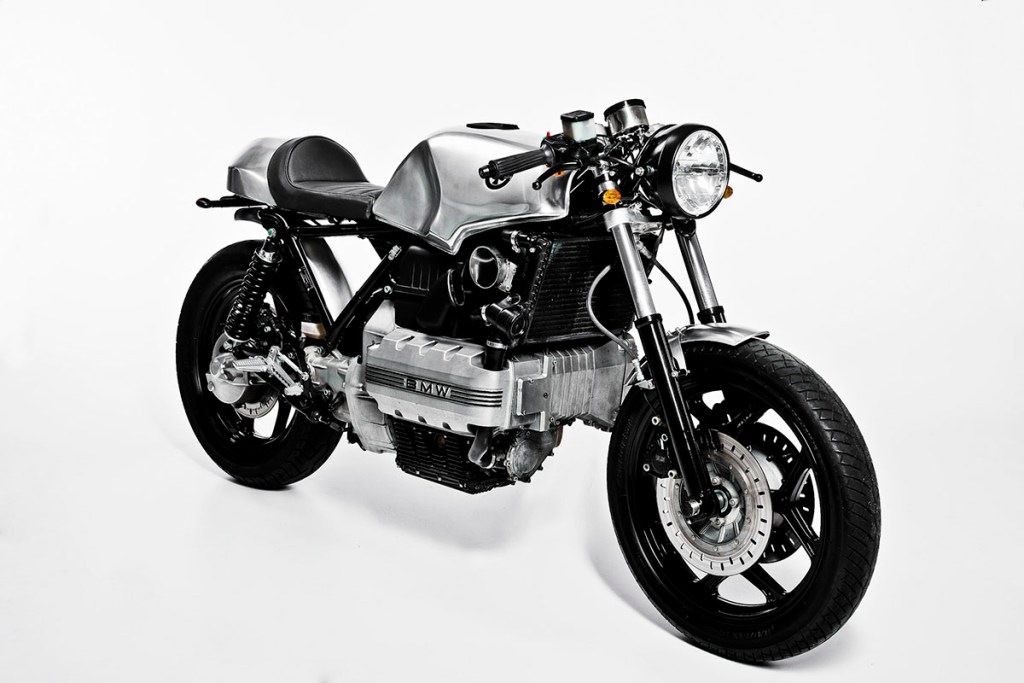 Last winter he started looking for a bike, that wasn’t already built out. It was then that he thought of the BMW K100 “…the ugliest bike” Marc could think of. “I remembered the BMW K100, a bike that was so expensive, when it first came out, you could have bought a car for the same money. Today I have to admit, it wasn’t the ugliest bike, but there are some forms of a K100 that are really not nice.”

Marc was initially inspired by a picture he found on the web. Scott Halbleib from Louisville, Kentucky who built a scrambler out of a BMW K100. “He got rid of all the useless stuff, even the exhaust, what is not allowed in Germany.”

Marc’s own atheistic leans towards the pure and raw. “No needless things, pure metal…aluminum. Black and silver.”

At first, Marc wanted metallic blue with orange stripe, but then he spotted “…my own fuel tank shiny silver and I started polishing. There it was, no color needed. And then I started over again to take away what can be taken away.” He wanted to get rid of the fenders, but you’re not allowed to do this type of modification in Germany. 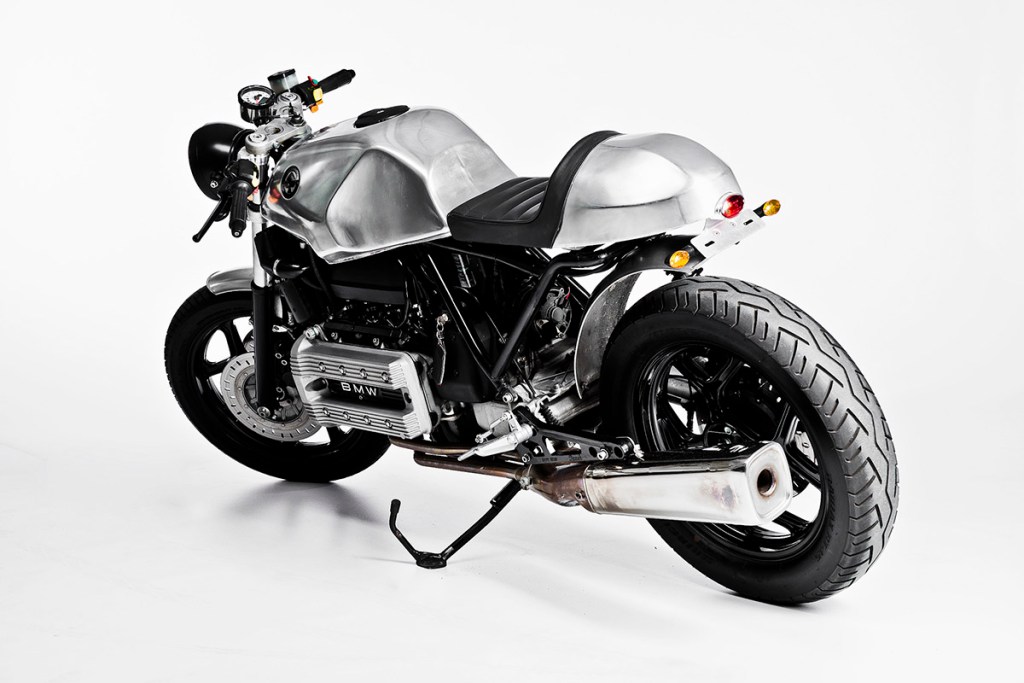 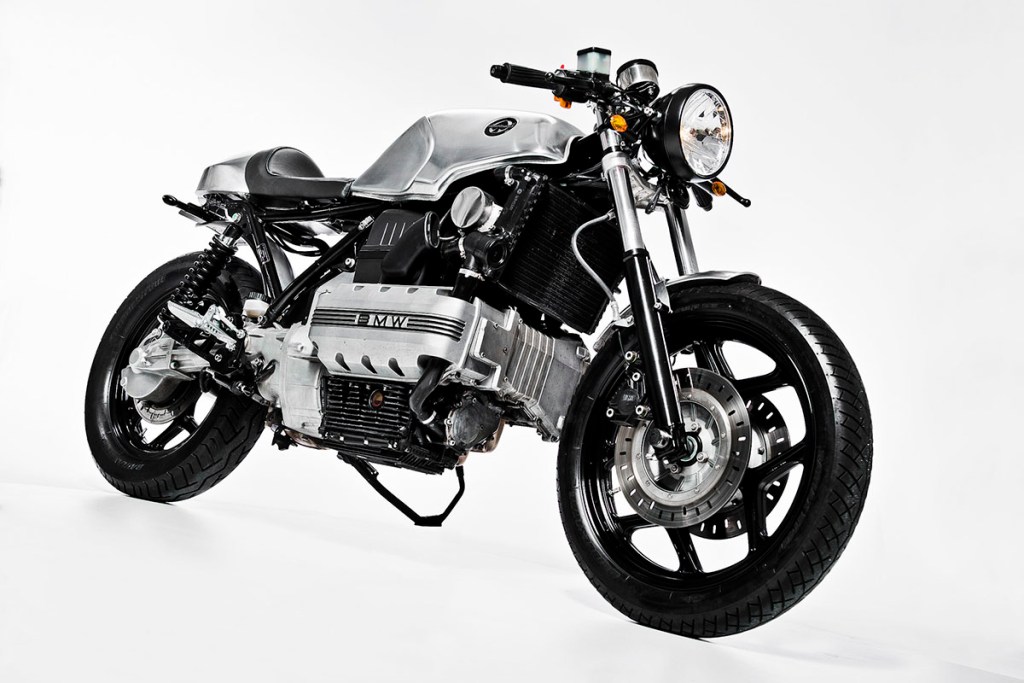 He cut the frame down at the end – around 35 centimeters (or 14 inches), and closed the tube ends with bowed tubes, then welded it.

Marc built a subframe from aluminum and did the seat body from one piece of aluminum sheet metal. The battery and the wiring were mounted underneath to get a super-clean look throughout the bike. 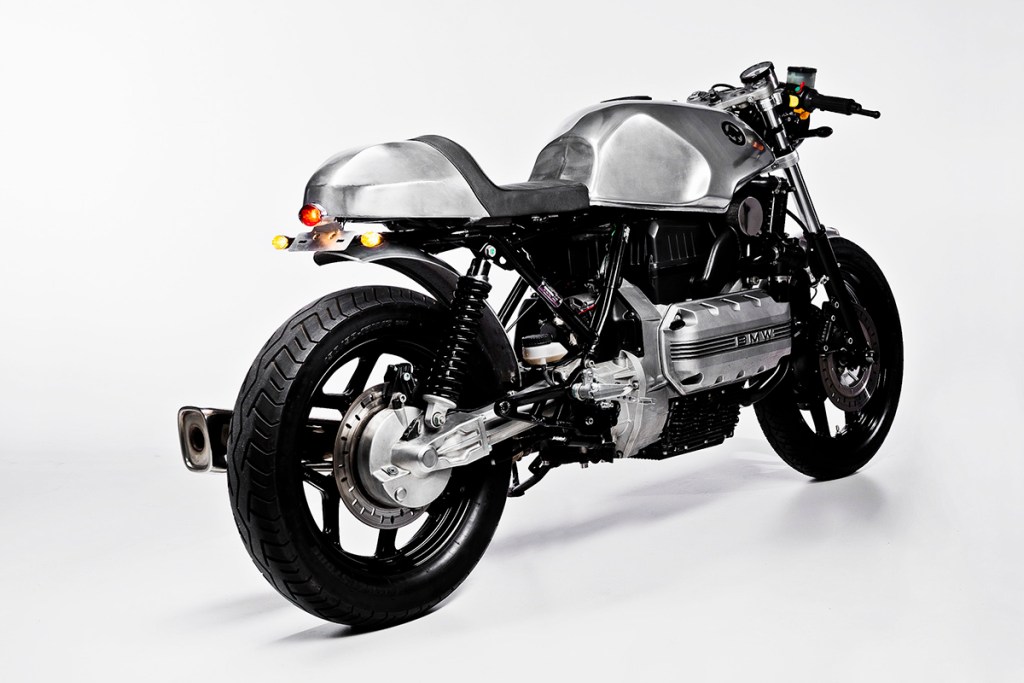 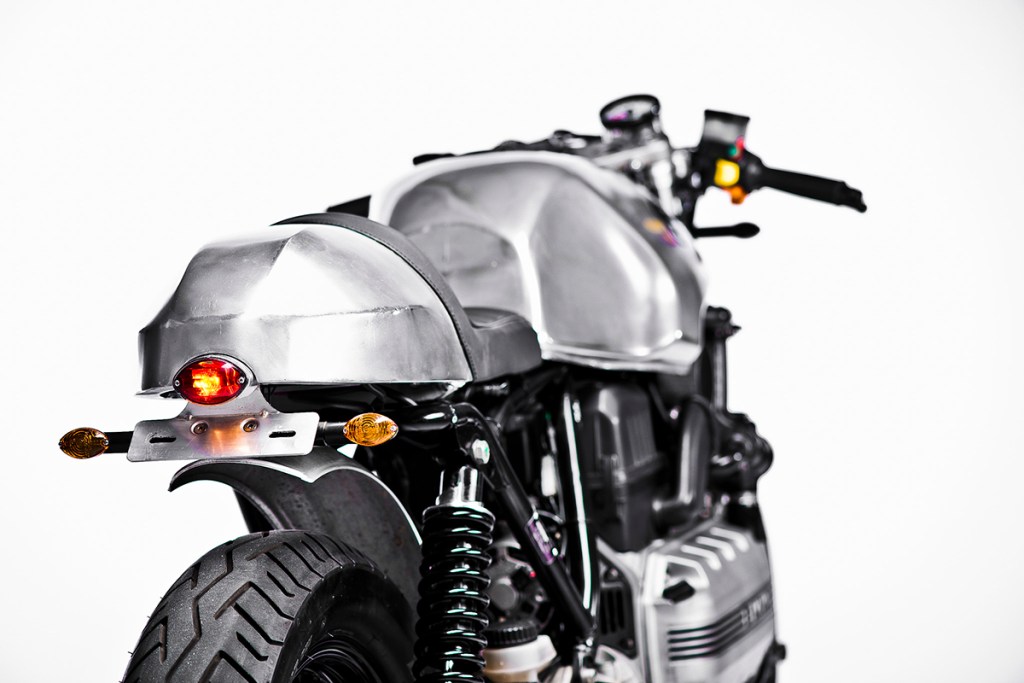 Other touches includes a round black headlamp, a small oval tail lamp that goes though the tail end with a tiny little gap, “…so you can see, that it isn’t just mounted there.”

The most challenging part of the build was the electrical wiring. “I re-wired the whole thing so I got rid of the huge combined instrument of BMW, just a little speedo with revs and everything in it.”

Adding to the challenge of this build is the Germany’s TUV – the testing body responsible for safety testing. As Marc says, “… everything on the road has to be checked to meet street legal safety requirements, like head & tail lights, indicators, wheels and tires, changes at the frame and shock absorbers, seats, handlebars, exhaust system etc.”

“Therefore I decided to report to the TUV real quickly, so the people there can tell me, what I have to be aware of, what to use, and what not.” In the end, the BMW passed inspection. 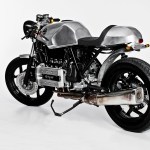 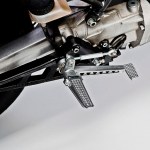 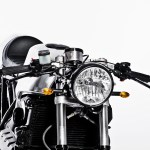 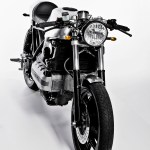 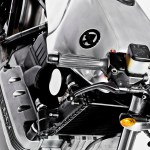 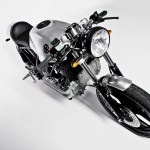 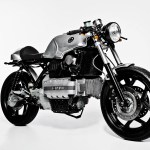 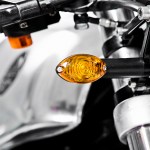 Building on the success of this BMW, Marc has started on a rebuild of a K100 for a Swiss customer. This client spotted his K100 on the web. And it doesn’t stop there, “Besides the K100, I started to customize a Honda CB750 Four, a bike that has to be made, because everybody did at least one, a Yamaha XT500 restoration, a Yamaha SR500 scrambler. We already did the aluminum subframe job on a Laverda 1000.”

Seems like Marc will need to add custom motorcycle builder to his already long resume.

“Next month there will be a BMW R65, which I bought. Maybe this one is gonna be blue & orange.”
– marc robrock