Mule’s Richard Pollock tells the story behind one of his latest builds: Stealth. 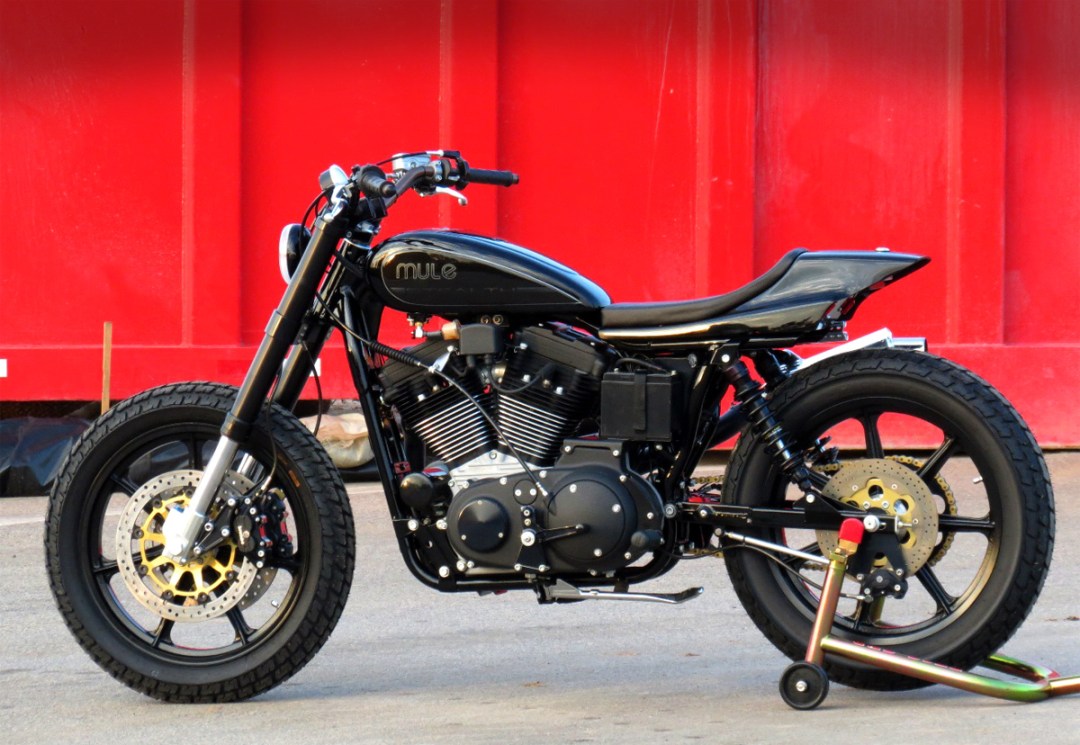 “It’s funny recalling all that went into building this bike which was a lot, that the things I remember most and have the most lasting impressions are the small things or small problems that had to be solved to make things work well or fit into a finite amount of space.”

A customer from NYC calls and wants a cool Harley streettracker. Having done a few, I say “Great”! I tell Mr. Customer that we need to source a later model, non-rubber mount Sportster with low mikes. Within a week he found a nice one 100 miles from me in Orange county at a really good price on EBAY. It had about $5K in motor upgrades, a nice set of shocks, Vance and Hines exhaust, braided brake lines, etc, etc. 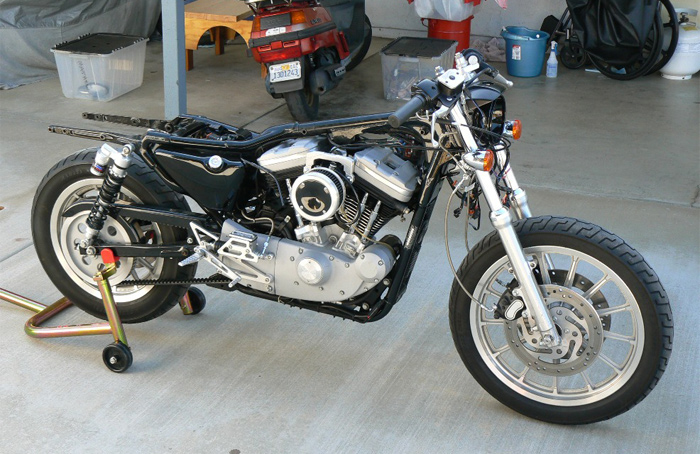 The bike was delivered and I went to work. One thing he really liked was the way I moved the shocks forward on the Web Surfer Special that happened to be in my garage when he came by for a visit. So that modification (shocks moved forward), and the overall look being completely black were the only real requirements. 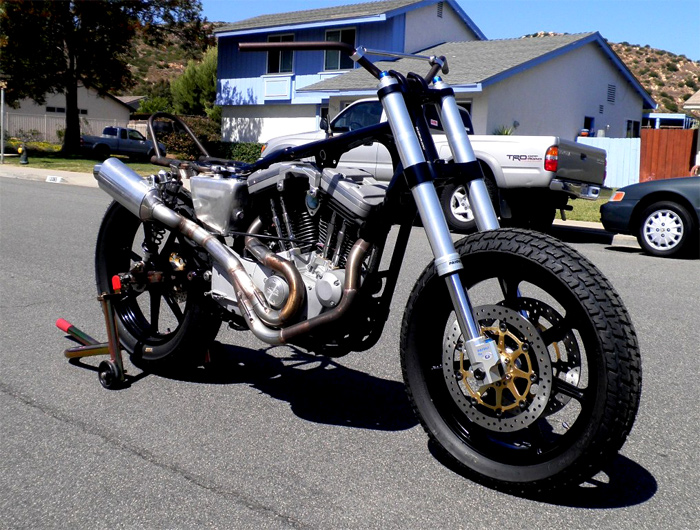 “I heard a rumor that Darth Vader is on the short list for the next available Stealth.”
– megadeluxe 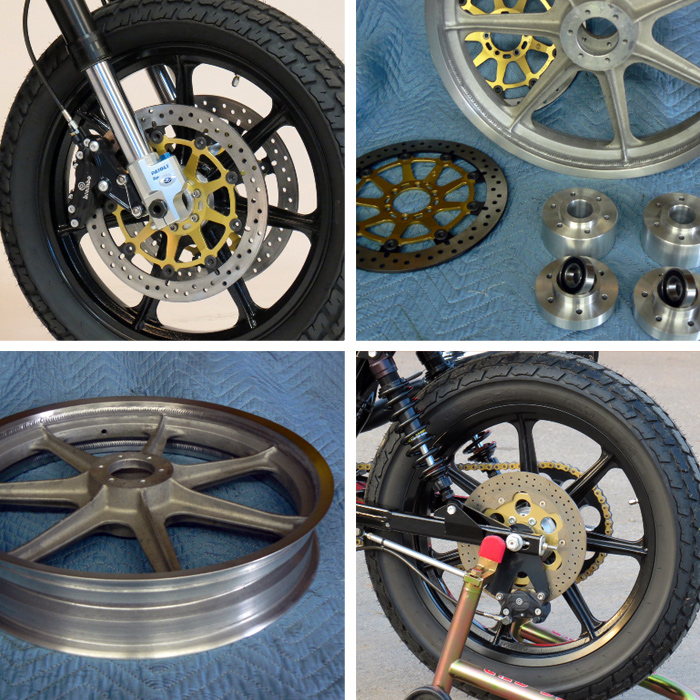 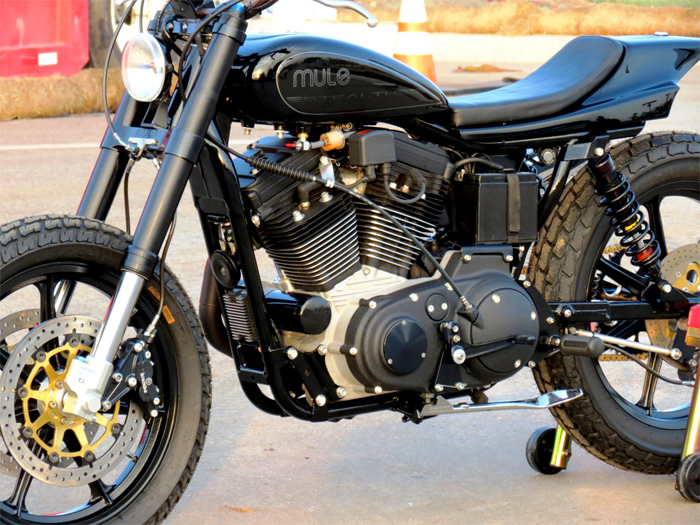 Actually, a lot of work went into the primary (clutch cover) that if you weren’t familiar with Harley Sportsters, you wouldn’t even notice. The outer portion of the clutch cover where the clutch cable attaches has been cut off and then re-welded on rotated clockwise about 90 degrees. Why do this? Well with cable coming out the bottom, when you change the cable, you need to dump the primary/tranny oil or lean the bike way over to the right otherwise the oil pours out the cable hole. Unsatisfactory. Further, and this is the biggie, HD’s come with 1” diameter handlebars. So what you ask? Well, when a builder wants to upgrade to high quality and/or racing high-function controls, you’ll find they are ONLY available in 7/8” for 7/8” handlebars. Available one inch stuff is all gothic, skulls, gaudy, overdone billet chopper style stuff. Fine for the “Chopper” look, but if you want the good stuff, it has to be 7/8”. Ok, so I put 7/8 flattrack bars on the custom clamps and a nice lightweight Buell style clutch lever and holder, which just happens to take a Buell cable which just happens to be shorter than the super long Sportster cable.

In summary, I rotate the outer section of the clutch cover, install a shorter Buell cable and attach it to the Buell clutch lever assembly which fits the 7/8 bars. All very tidy and looks like it’s all stock. More or less. Then, on the forward portion of the cover, we bored a hole in the case, made a boss, welded it in with three small threaded holes and then installed a small inspection cover with an o-ring. This allows you, as there is no provision stock, to rotate the crank for timing or assembly purposes. 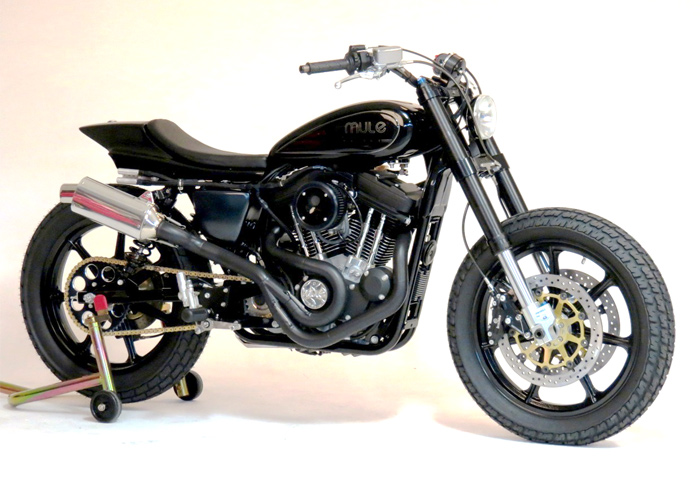 Looking at the right side of the bike, I trimmed down the cam (gearcase) cover and we built a set of 2 into 1 stainless pipes that utilized the aluminum silencer from the original purchase. The silencer has been shorten about6 or 7 inches as it was huge originally. The rear master cylinder is from KTM with a finned reservoirs added. The brake pedal is interesting in that it came from a Confederate Hellcat project that I did for Mark Barnett of Barnett’s Harley Davidson in El Paso, Texas. 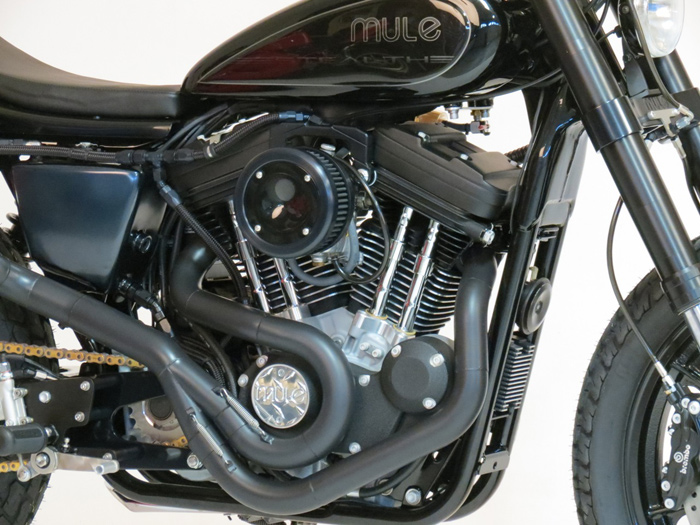 The original pedal was about nine feet long and weighed a ton. I removed it from the Hellcat and threw it in a box. Looking for something one day, I found the pedal which was nice for only two reasons. It was stainless and it had a bearing at the pivot which was sorta cool. 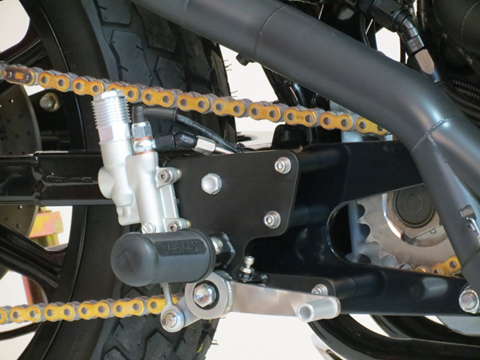 I cut to the perfect length, put in a couple bends and reworked the tab where the linkage bolted on.

All the oil line fittings have been anodized black as well as the aircleaner cover and really everything aluminum. The owner provided the high end “Motogadget” multi function gauge wfor which we machined up a special gauge mount. The front master cylinder is from a VFR800 Honda and used for it’s large piston size, beautiful lever assembly AND because it has a cool integrated reservoirs. Most of the late model master cylinders use a funky remote bottle for the fluid for mounting on clip-ons bars fitted on sportbikes. The left side of the bars have a small kill button installed for changing functions on the Motogadget gauge. 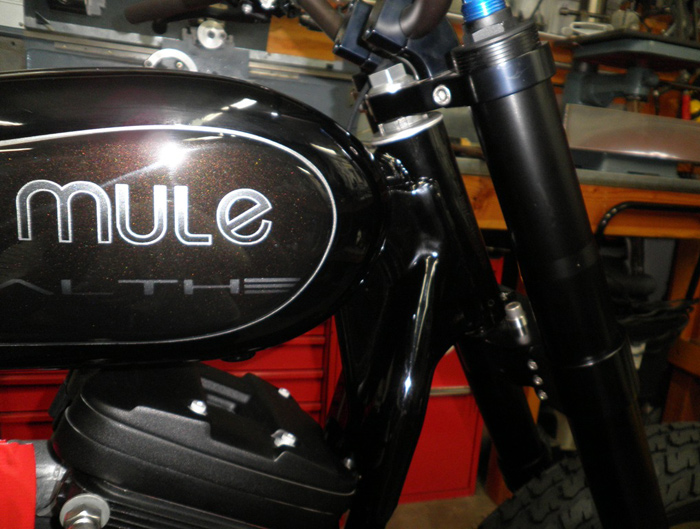 It’s funny recalling all that went into building this bike which was a lot, that the things I remember most and have the most lasting impressions are the small things or small problems that had to be solved to make things work well or fit into a finite amount of space. The big stuff like the huge torque an moster brakes or the beautiful quality of the paint are awesome to be sure, but they just came much easier. You love the stuff you have to work for. 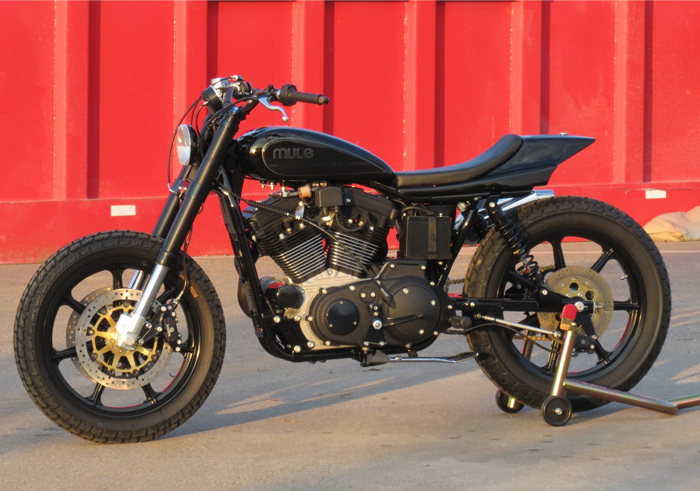