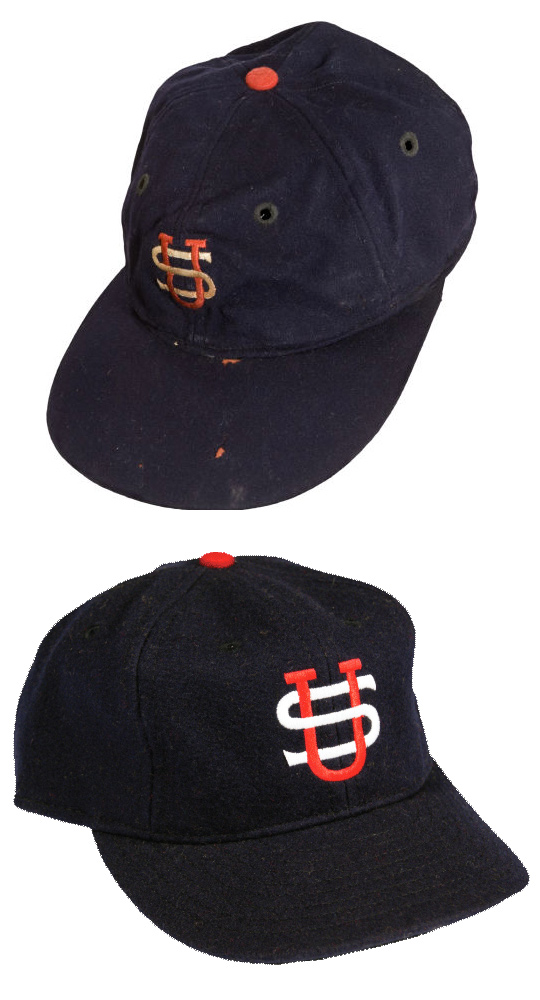 1934 Lou Gehrig Tour of Japan Game Worn Cap. Both literally and figuratively the crowning finale of the full Tour of Japan uniform listed in the preceding lot, this deep navy cap represents the first known survivor from the famed 1934 Tour. It joins just two other Gehrig hats, both Yankee models, to have been placed upon the hobby’s auction block in the past dozen years, the scarcest of all Gehrig uniform components.

While modern Major League caps are maddeningly indistinguishable from those available to the general populace, such was not the case in the pre-war era, and certainly not for this historic barnstorming excursion. As if the provenance of its pairing with Gehrig’s jersey and pants from the Tour were not enough, the interior leather headband is artfully embroidered “7 1/8 L. Gehrig.” A patriotic white and red embroidered “US” appears above the visor, with a red button at the peak. The cardboard interior of the brim has stiffened with age but remains unbroken, as could be reported of the interior headband. Only a small scattering of moth holes at front must be noted as liabilities, discounting the apparent light sweat staining of the interior. A truly marvelous relic from the final days of the Ruth/Gehrig age.

1 You could buy 3,296 Ebbet Field Flannel caps for the same price as the original.