UPDATE: THIS STORY WAS ORIGINALLY POSTED ON JULY 21
Recently watched “Catching Hell,” The Steve Bartman/Chicago Cubs documentary after hearing about it on NPR. For those of you who don’t follow baseball – this excerpt from the film’s site:

“The Chicago Cubs were five outs away from the 2003 World Series—and a chance to end a century’s worth of disappointment. But as outfielder Moises Alou leapt into the stands for a crucial foul ball, a fan happened to deflect the ball away, cursing the team to ongoing failure. In an instant, the fan’s name became a byword for blowing it in a critical, high-stakes moment.

Though dozens of errors contributed to the Cubs’ loss, the name “Steve Bartman” is etched into the annals of sports infamy. Why?

Catching Hell probes the topic of sports curses, superstitions, and scapegoating, tracing the roots of our compulsion to focus blame for a team’s sad legacy on brief moments of identifiable ineptitude. In the process, its comprehensive interrogation of this under-examined sports phenomenon lends insight, and even heroic tragedy, to Bartman’s own curs 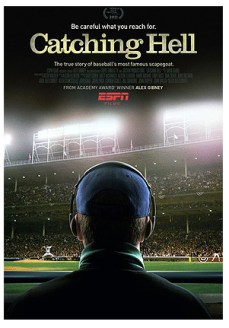 The film spotlights:
• Cubs fans1 turning ugly on Bartman at game six of the series, and the intensive storm he suffered after they eventually lost the series to Tampa Bay.

• Steve Bartman’s admirable behavior in just wanting to have a normal life. (Offered tons of money to tell his story – he’s steadfastly refused.)

• The interweaving of Bill Buckner’s 1986 World Series scapegoating, and his ultimate path to redemption.

Director Alex Gibney, who is a life-long Red Sox fan, brings in Bill Buckner. Buckner’s story ( blamed by some for the Red Sox’s 1986 World Series loss ) forms a parallel kinship with Bartman and his saga. Heartbreaking to see the toll this has taken on Bill Buckner, and how he finally forgave the press ( or was it the other way? ) for making him a scapegoat for all these years. Gibney shows a path towards forgiveness – for both Bartman and Cub fans.

1 Known for being some of the nicest fans in any professional sport.