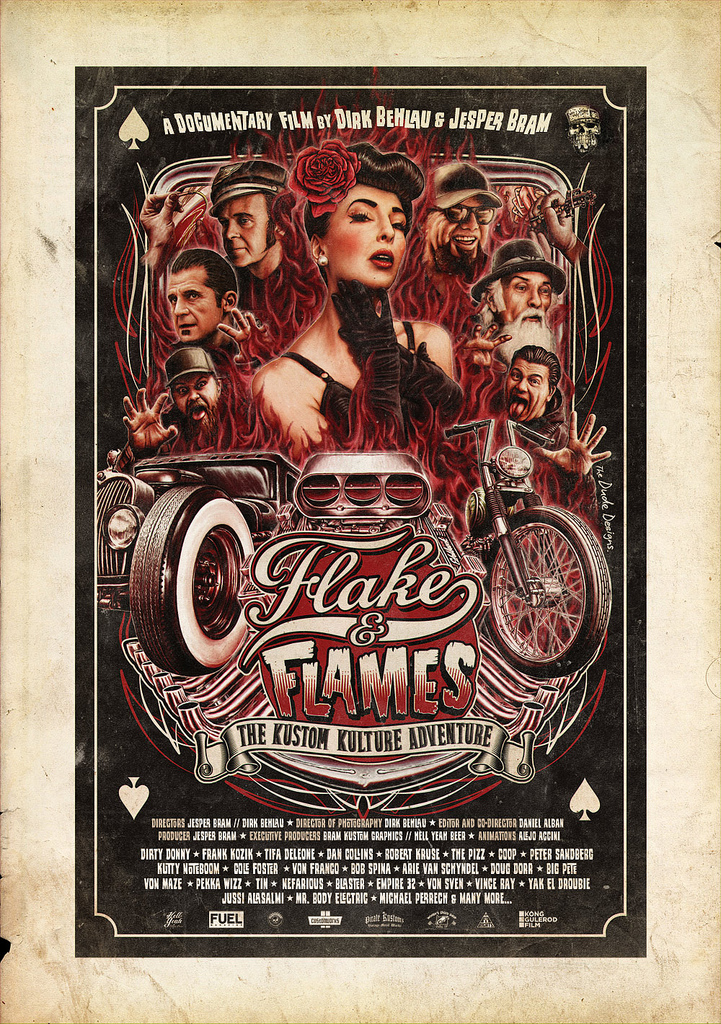 “The main idea is to show the world the massive influence of Kustom Kulture in nearly every kind of modern popculture like music, art, cars, bikes, style etc. – to show the immense creativity and variety of the people doing what they love.”
– dirk behlau

Dirk and Jesper spent a year on this film in search of the leading artists within the Kustom Kulture world. In their words, “Picking the brains of living legends, up and coming artists and builders within the culture.” I think Kustom Kulture is either completely misunderstood or looked over by some. Dirk addresses some of these misconceptions, and the story behind this film. 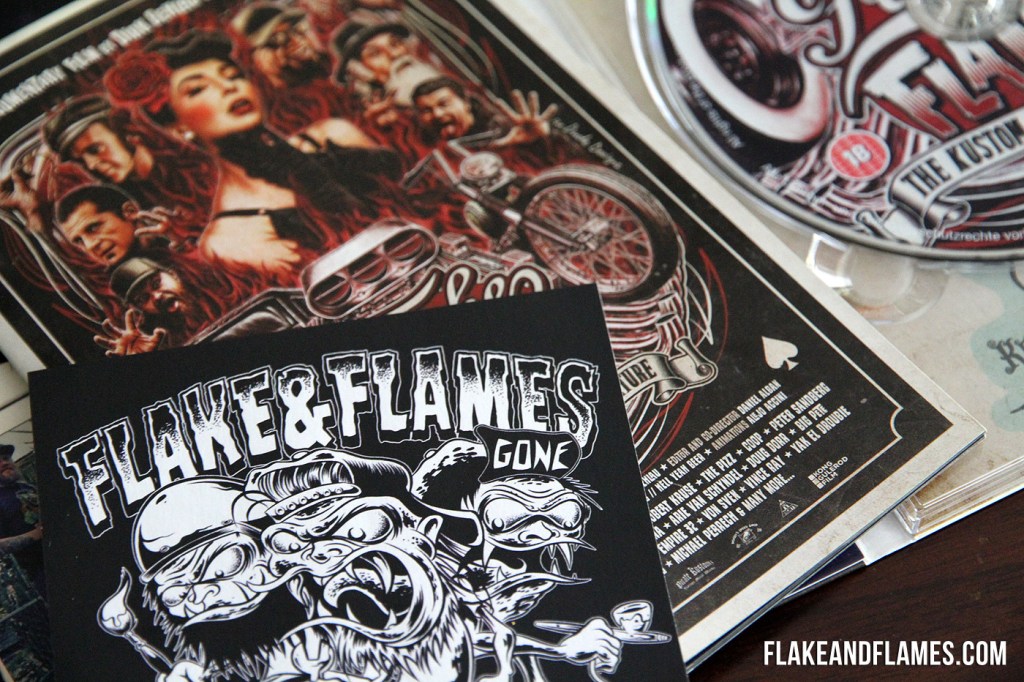 “Kustom Kulture is art divorced from a lot of the pretension.”
– coop

Why tell this story?
As far as I can remember the idea came up in 2010 while talking about the fact that my Danish buddy Jesper Bram and myself are attending a lot of the same shows and that it might be a nice idea to film them for some eventclips. I had filmed the Bottrop Kustom Kulture show in Germany for Dickies before for example and just wanted to cover our tour on film. Then we decided to do a trip to the states to visit some of our favourite Kustom Kulture artists and suddenly everything just took off. In the end we worked on the film for over 2 year. We had a 9 days trip to the states and later in the year we went to several countries in Europe incl. Italy, Sweden, Finland, Germany, England and France. It just snowballed – an amazing experience!

The main idea is to show the world the massive influence of Kustom Kulture in nearly every kind of modern popculture like music, art, cars, bikes, style etc. – to show the immense creativity and variety of the people doing what they love. We also wanted to create something that is an hommage to the culture we love so much, we are part of the Kustom Kulture scene ourselves and we live it 24/7. The film is intended to be for people who already know what Kustom Kulture is about, but also for people who have no idea about it.

We contacted some artists and bikebuilders in the US and told them about our plan and everybody just jumped in immediately. Actually it was pretty easy to organize, we just had to schedule the timing – we visited 2 artists a day in the L.A. & San Francisco area. Rob Kruse of The Dynotones, who is also a featured artists in the film, helped us a lot as well organizing this and that but actually we just did it. Looking back today we would do certain things a little bit more structured and organized but that’s just how it was…

In your opinion, what are the biggest misconceptions about Kustom Kulture?
Kustom Kulture means a lot of different things, everybody has his very own definition of it – that’s what you will also realize when watching the movie. 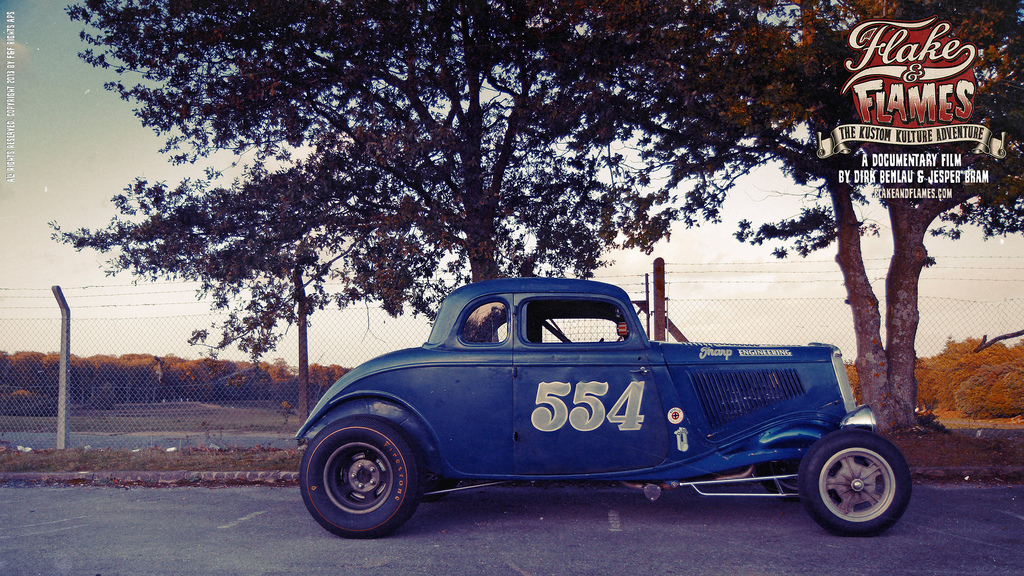 How long did it take you to complete this film?
We actually filmed in the US for 10 days and then later in the year we did Europe – England, France, Italy, Finland, Sweden… we crowdfunded the movie with two campaigns where people around the world funded over 50.000 US-Dollars, then we were looking for other sponsors to get the film done. It was about 2 years hard work. Actually a nightmare for just 2 people who are artists themselves working on lots of different projects. Nobody can image the amount of work if you haven’t done it yourself. 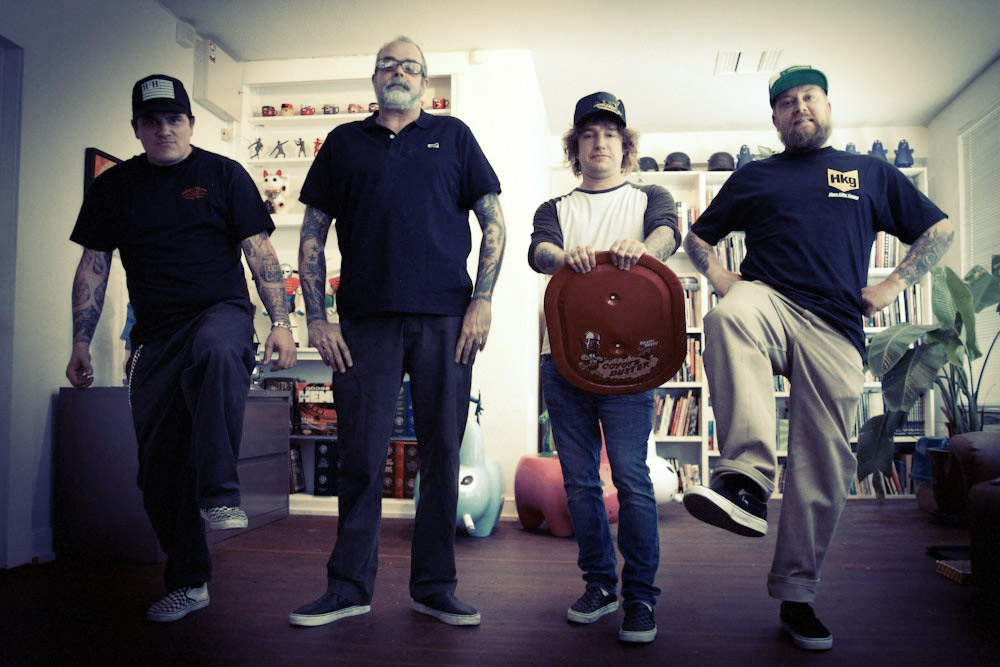 You interviewed legendary Frank Kozik, what was that like?
We cruised around with him and Dirty Donny in San Francisco, dropped by his studio and asked him some questions. Like with everybody else in the movie we just let them do what they wanted. Jesper did all the interviews while I was filming most of the stuff. We never told them do this and that, never pushed them in a special direction and we never tried to add drama elements – everything was supposed to be very natural without a script – totally different from what you see on TV nowadays. These people are real, they are unique and they do just what they love without any compromises. We wanted them to be themselves. 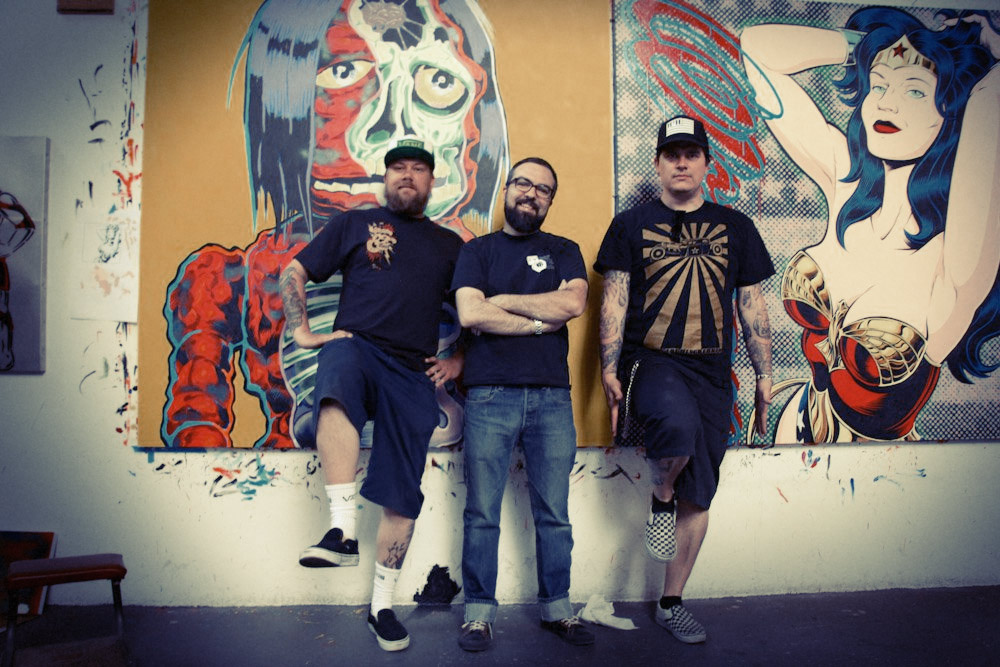 In the film, artist Coop says that, “Kustom Kulture is art divorced from a lot of the pretension.” Do you feel the same way?
I totally agree. I guess most of the artists do not think about whether they are creating art – they just do what they do and have fun. 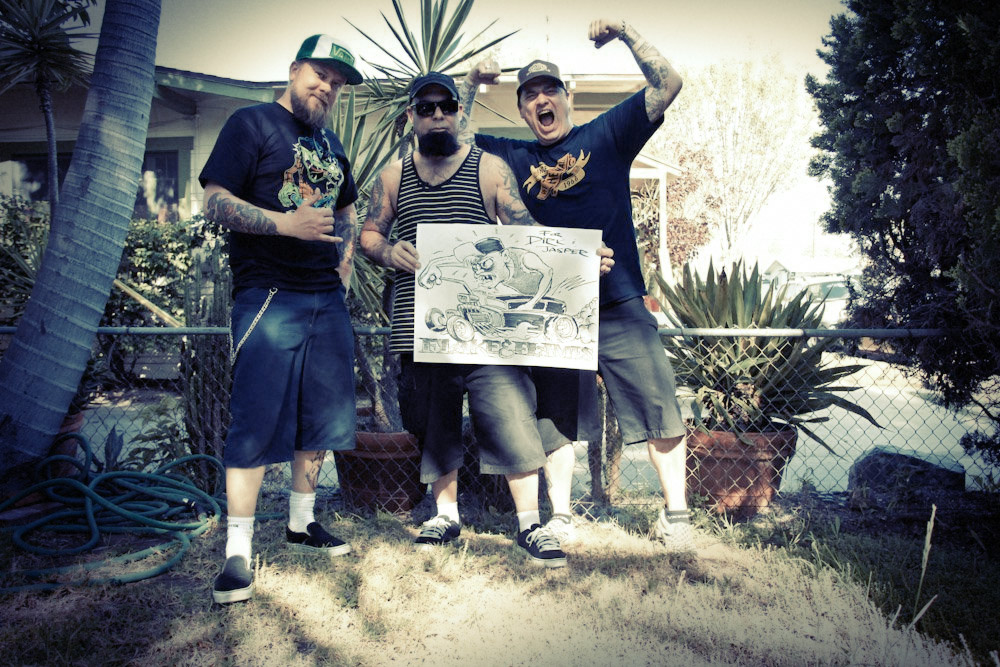 What’s been the response to the film so far from those in Kustom Kulture?
Absolutely overwhelming. We already sold over 3.000 copies of the film, all on our own without a big distribution. We have two online shops www.buyflakeandflames.eu for Europe and www.buyflakeandflames.com for the rest of the world. The feedback we get from around the world from artists and fans is just supercool. We never expected that. 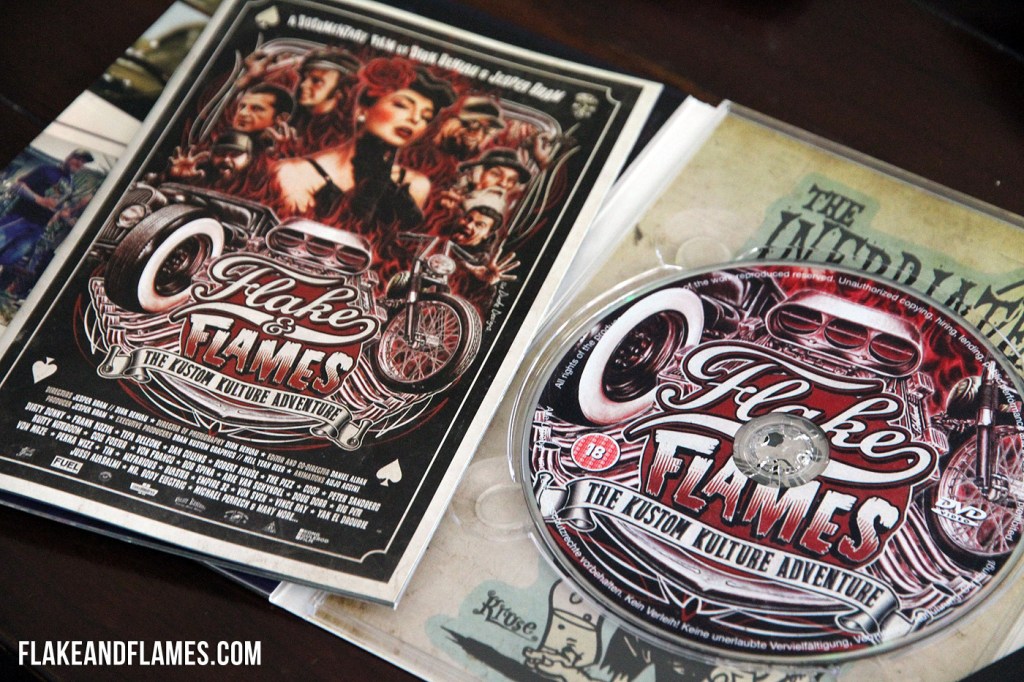 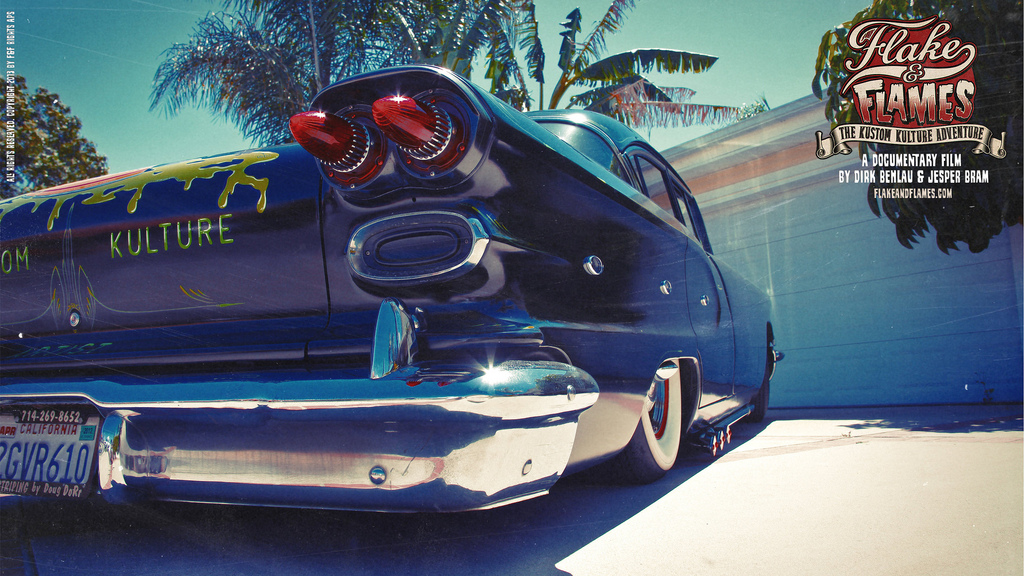