I asked Benny how he would describe himself. He wrote me back, “…motorcycle enthusiast, artist, and gentleman welder.” Brevity with complete honesty. Special thanks to photographer Sam Christmas for introducing me to Benny, and providing additional images for this story. 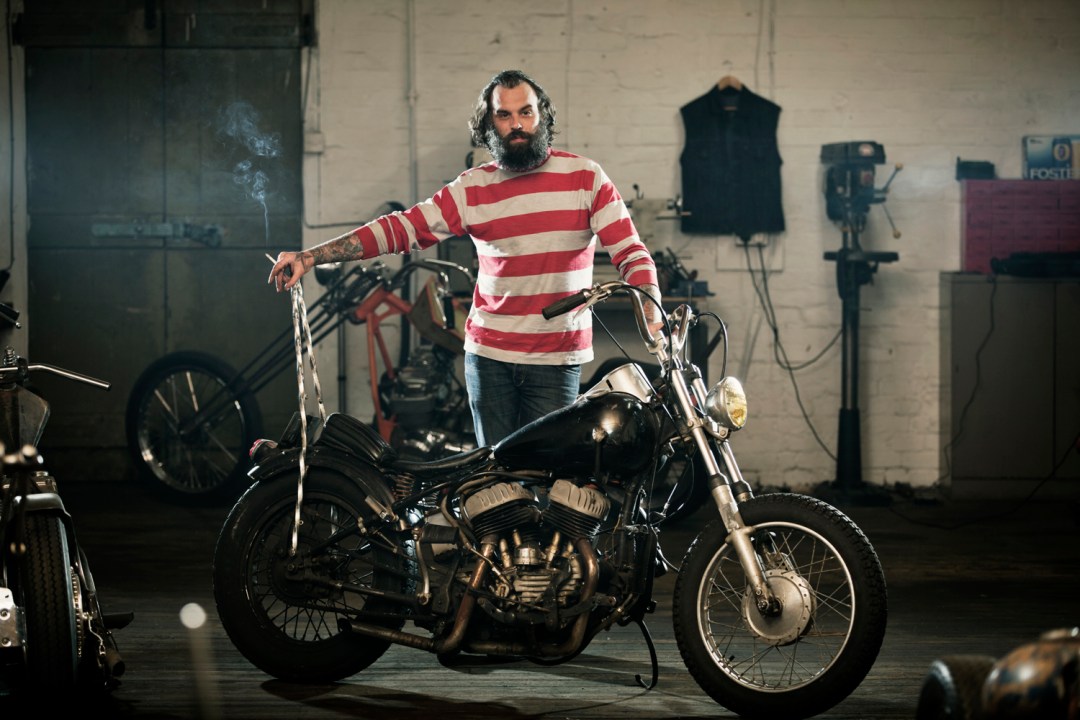 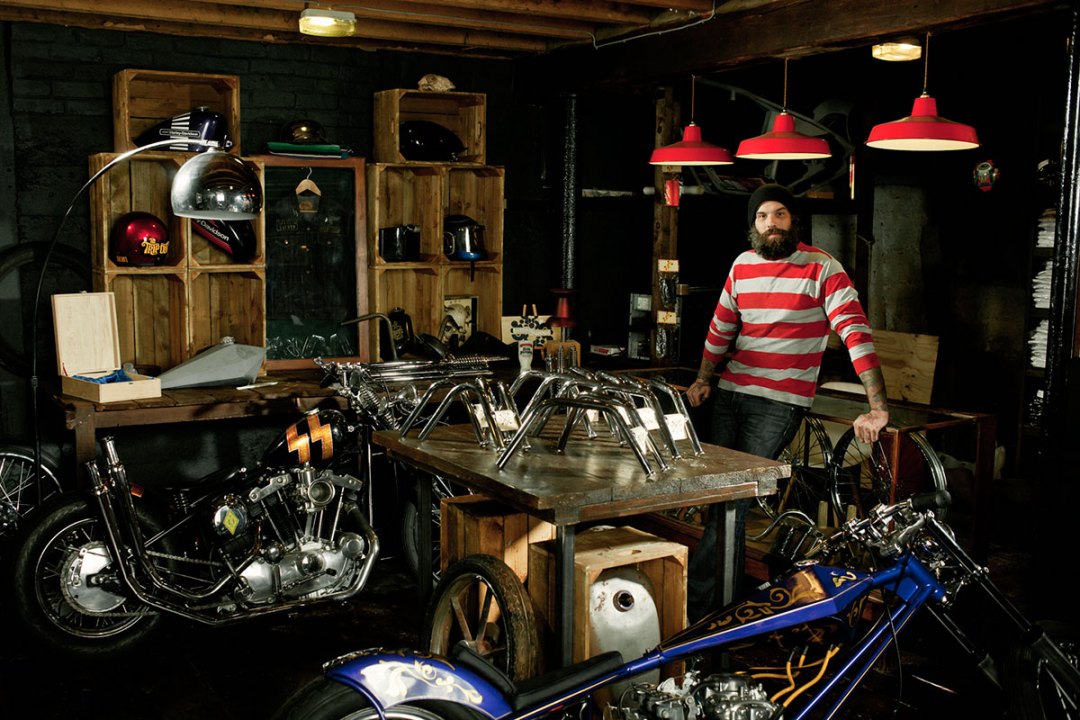 “I never set out to build bikes, I just always wanted a chopper after seeing my first one in an old custom car magazine, it was a full on flamed up Panhead chopper but I didn’t know that then, I took the centerfold out of the mag and laminated it with sellotape and put it on my bedroom wall, the urge for a chopper didn’t go away.”
– benny thomas

How did you get interested in building bikes?
My mom took me to a chopper shop when I was about thirteen years old and the guys working there had no interest in giving me any advice or help, I didn’t know where to buy one from and the few bikes that I had seen for sale didn’t float my boat. So when I was fifteen I bought a Honda, borrowed a welder and got to work. I still only really build bikes because I have an idea in my head of a bike I like but haven’t seen it anywhere, or I have seen it in a magazine but it’s thirty years old so the only way I can see that bike is to create it myself.

What motorcycle builders were you inspired by?
It would be hip to say the bikes of the El Forestaro, Ben Hardy, David Mann painting etc. but it wasn’t so for me, not when I was younger, British builders like Phil Piper, Chris Ireland and John Reed were in the mags and those were the bikes I saw and liked, and that’s what got me into custom bikes, for sure. The older I got and the more I learned about the history of these bikes, the more I got interested in 60’s and 70’s choppers and the people who built them, I’m a big fan of early Ness bikes, Jeff MCann and Denver Mullins, the high headstock and long fork Harley era of Denver’s…not so much his Hondas.

When you first look at a motorcycle (that’s not yours) what do you focus on?
It’s always the lines, the over all silhouette, the angle of the tank, the bars, what gives it ‘the look’ I’m not big on masses of over fabrication and quirky little doodahs on bikes, engineering for the sake of engineering, I like stripped down pretty bikes with just enough style and class to stand out. You can be the best welder/fabricator/mechanic in the world but if you haven’t got a bit of style that bike is never going to look good. 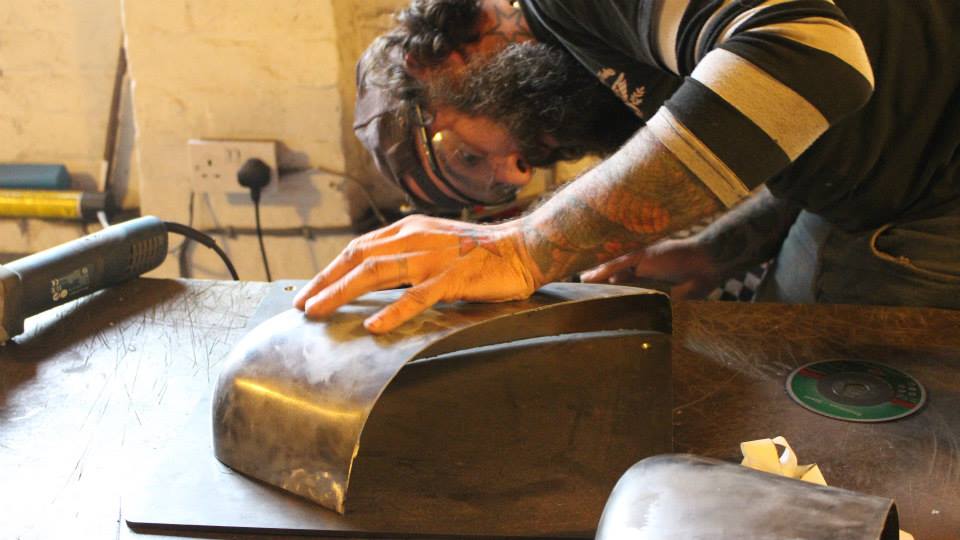 “I’ll only have a business building one-off motorcycles as long as people want to pay me to do it, but I’ve said that every year from when I started, and fourteen years later I’m still doing it.”

Your process for building bikes?
I just do it, I have a background in fine art which in some ways would suggest I like to draw ideas out first but in fact it pushes me more the other way. Like a clay sculptor, stick a bit on…stand back, if it doesn’t look right change it, take a bit off…repeat till it looks right. I do generally have a pretty good idea in my head of what I want to do before I start and I can look at a frame or a wheel and conjure up a good image of the finished bike in my mind but until I’ve got bits of metal in the right place there is know way of me knowing if it’s going to look right. 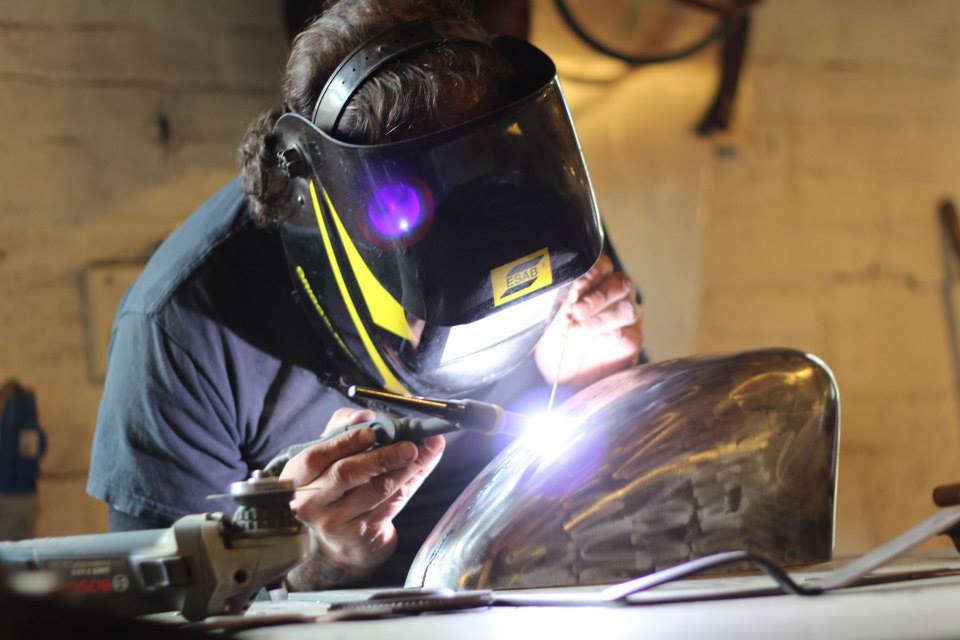 Detail on your motorcycles that you spend the most time refining?
Aesthetics wise it is always the tanks, the wrong type of tank and it’s position can make or brake or a classic style chop, I spend a lot of time propping tanks on back bones, lifting them up a little, dropping them down, cutting and narrowing them, re-tunneling them and then throwing them away and starting from scratch. 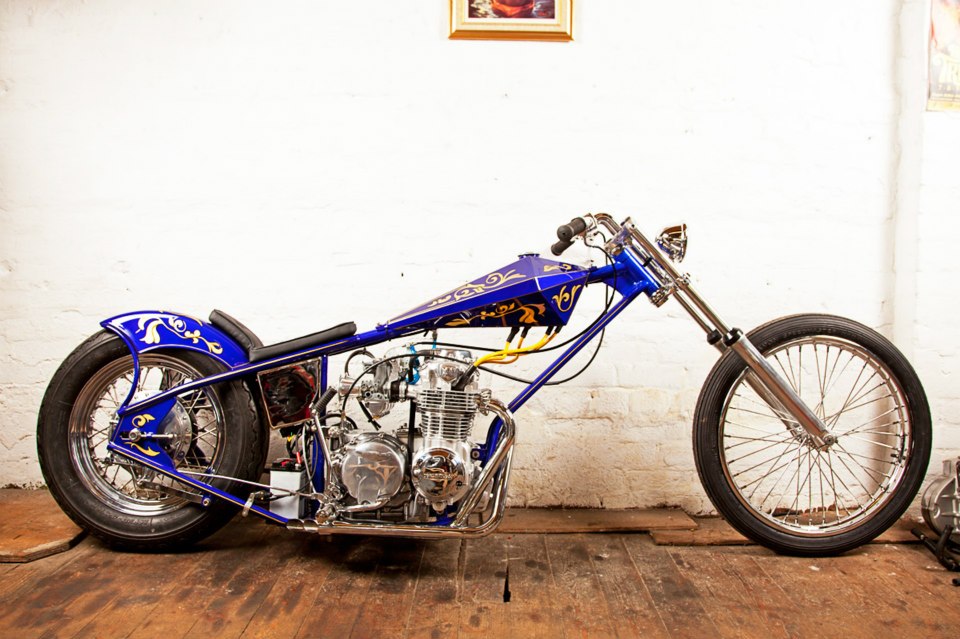 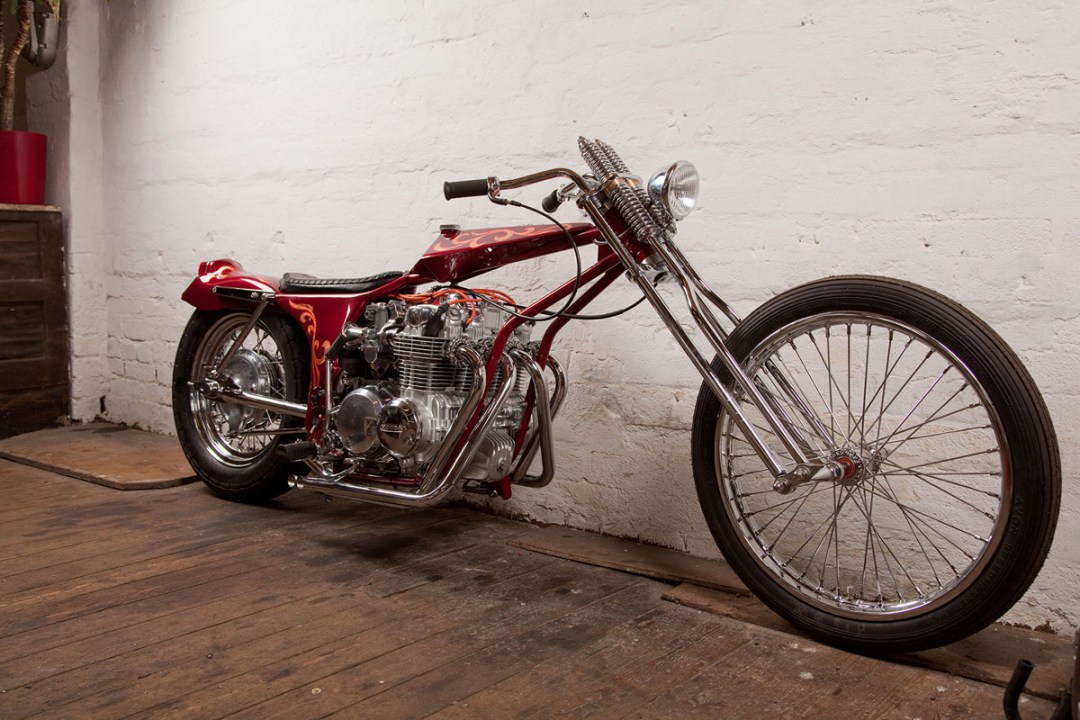 Most inspirational bike you’ve ever seen and or rode? What about it made it so special?
An Arlen Ness Sportster Digger which he built-in 1975, it was at a show in Verona where I was spending time with some friends. An Italian lad had bought the sportster and when he found out the Ness family were in town for the show he bought it along and there it was, nestled amongst the huge recent Ness creations, all these big inch swoopy baggers with screens and all kind of billet stuff and then this neat little digger in the middle of them.

It was such a pretty bike, so dainty but so purposeful looking, everything was so perfect on it. Whilst everyone else was getting their photos taken with the girls draped over the new Ness bikes I was lying on the floor looking at how the 5/8th tube hardhead was welded to the rear half of the frame. It must have looked pretty odd because Arlen himself came over and asked me what I was doing. He had a lot of time for me and I asked him loads of questions about the bikes he was building in the mid seventies, it was a fascinating lesson for me and I like to think he enjoyed talking about his old builds rather than signing calendars and stuff. I learned a lot about the bikes I love that day. When I got back to England I built two diggers, and that’s my little claim to chopper history fame. If someone tells me that I’m something isn’t done the way it used to be on one of my digger builds I say “Yeh it is, Arlen told me.”

Favorite era of motorcycles?
I would say the 70’s but I guess really it is right now, I wasn’t there is the 70’s (well I was but not old enough to appreciate it) and certainly on the wrong side of the pond. I like what is happening now. I love the regeneration of the traditional chopper scene and I think the image of a jacked up, beat up 60’s ironhead chopper with narrow bars, drum brakes and a magneto white lining through the city in between modern Beemers and Mercs is something special. 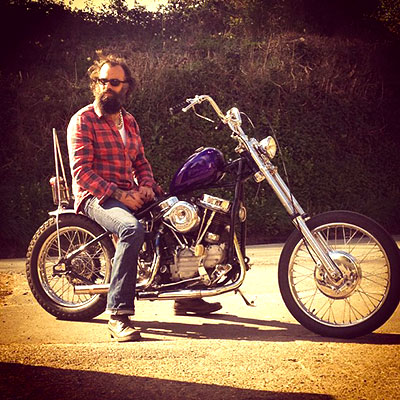 My dream build would be the one I own, it’s a 1951 Harley Davidson Panhead chopper, I built it from scratch, every nut and bolt and I’ve had it for a long time. I sold it once in a moment of self-doubt and spent the next two years regretting it. I managed to buy the engine and gear box back and built the bike again…every part, every washer, it’s nothing special in the grand scheme of custom bikes but it’s my motorcycle and I love it. When I’m gone I’ll leave it to my daughter who will probably sell it to buy a car or go on holiday or something.

Best compliment you’ve ever received about one of your motorcycles?
The guys who have just had their first ride on a bike I have built for them, those texts or emails I get from them that just say ‘WOW’ or something along those lines, that’s better than any magazine praise or passing comment, I go home happy after stuff like that.

Phrase you use most around the shop?
Where the fuck does this bit go?

Most satisfying aspect about having your own business?
Being able to what I want, when I want, I’ve never worked for anyone else and I don’t think I could, if it’s a nice day I can take off on my bike, If I want to work on one of my own projects I can. I am very lucky that people like what I do enough to pay me for it, that doesn’t just mean I’m lucky enough to work in the bike industry because I like bikes, I’m lucky enough that people give me free rein on designing and building a bike from start to finish. I get paid to build what I want to build…that’s pretty satisfying 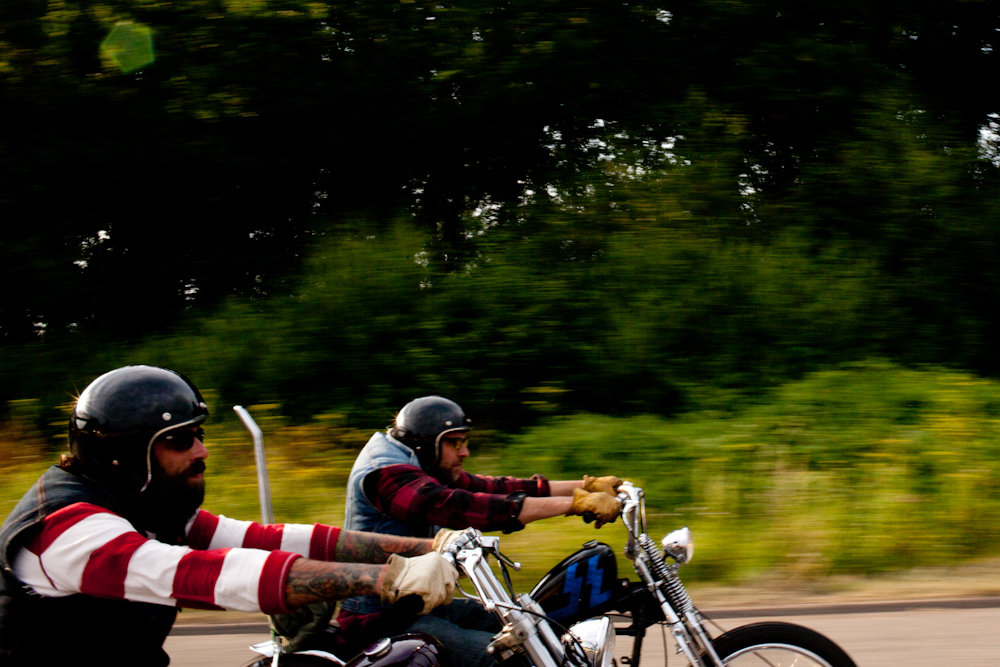 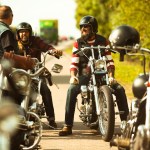 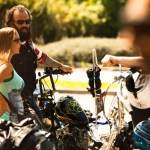 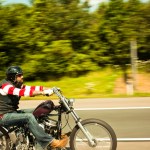 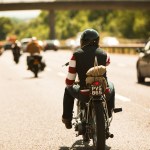 Best place to go for a ride in your area?
I live in the Second City and it’s pretty built up round here, it’s a lot of stop starting so not too much fun on an old rigid Harley. But within twenty minutes I can be out of the city and out into the country side where I work, that’s what I like, leaving the city and its people behind. I love the English countryside, that’s where I like to ride if I’m by myself. If there is a load of us then it’s pretty good fun riding anywhere. 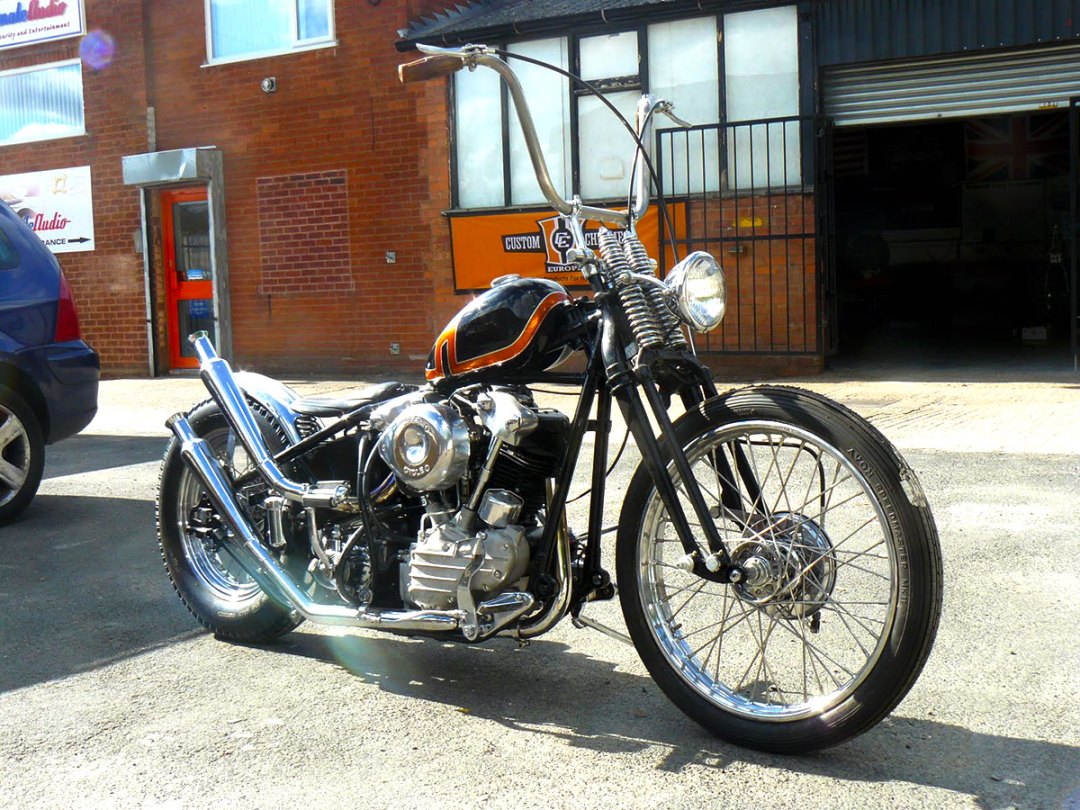 What do you like to do when you’re not building bikes?
Ride them and look at them on the internet – I’m a chopper geek. Although I have just finished renovating a Victorian property but now that’s done I need something else to do, I can’t sit still, my mind races and I’m in my own head thinking about projects, finding something else to do like working on houses is like a respite for my motorcycle addiction but it only works for a short time but yeh…another house maybe, I’ve been looking for an old industrial place to turn into a living space.

And what inspires you nowadays?
In the bike world people who are younger than me and just getting into it but doing it properly, building bikes in their sheds but doing it right, learning and asking all the right questions. I always try to make time for people who want to ask me questions about bike building because I never had that when I started, no one was interested in helping me. Then there is the guys that are older than me and were building and riding bikes long before me and are still doing it now…those are the guys I still call for help and advice and I find those guys inspiring. One guy I know built a knucklehead chopper forty years ago and is still riding it in the same guise now…that inspires me. 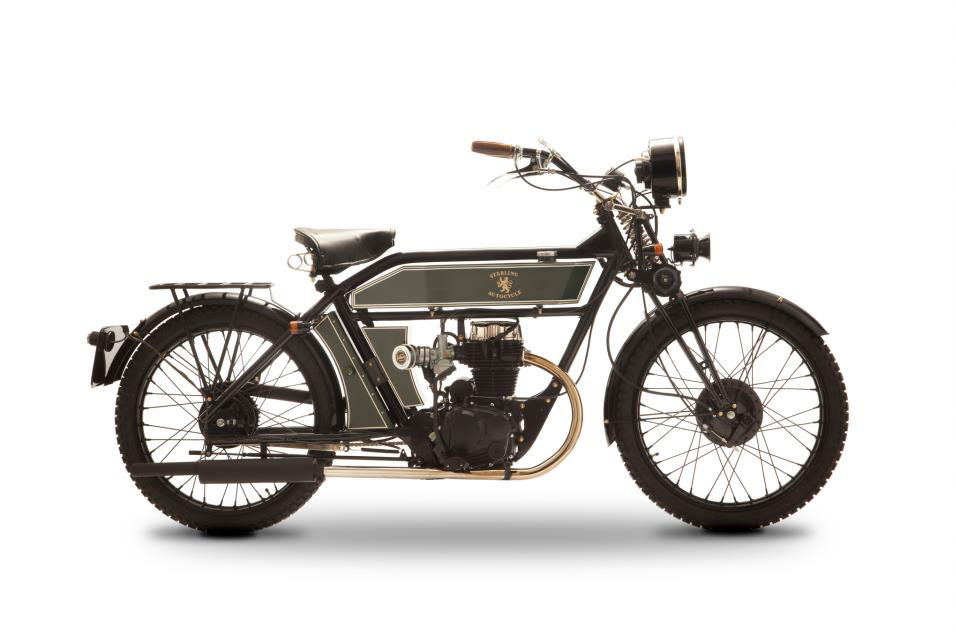 What’s next for you?
Who knows, I have a range of clothes off the back of the bikes and I manufacture a range of traditional chopper handlebars, I guess the parts thing is the next logical progression. I have developed and built a number of prototype motorcycles for companies who are putting them into production and I am part owner of the Black Douglas Motorcycle Co. in Milan which is a new venture building small cc city bikes which stemmed from a prototype bike I designed and built, it’s kind of the polar opposite to loud and dangerous old Harley choppers but is a fun project which I am enjoying. 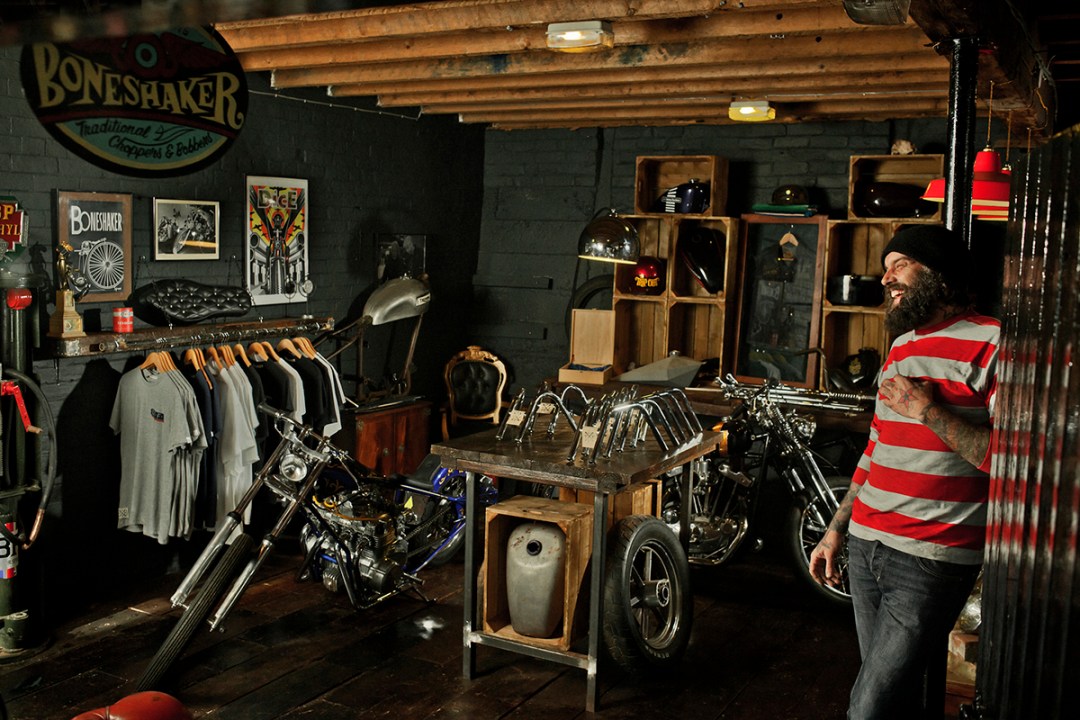 I’ll only have a business building one-off motorcycles as long as people want to pay me to do it, but I’ve said that every year from when I started, and fourteen years later I’m still doing it. Whatever I do, old choppers I’m sure will be a big part of it. 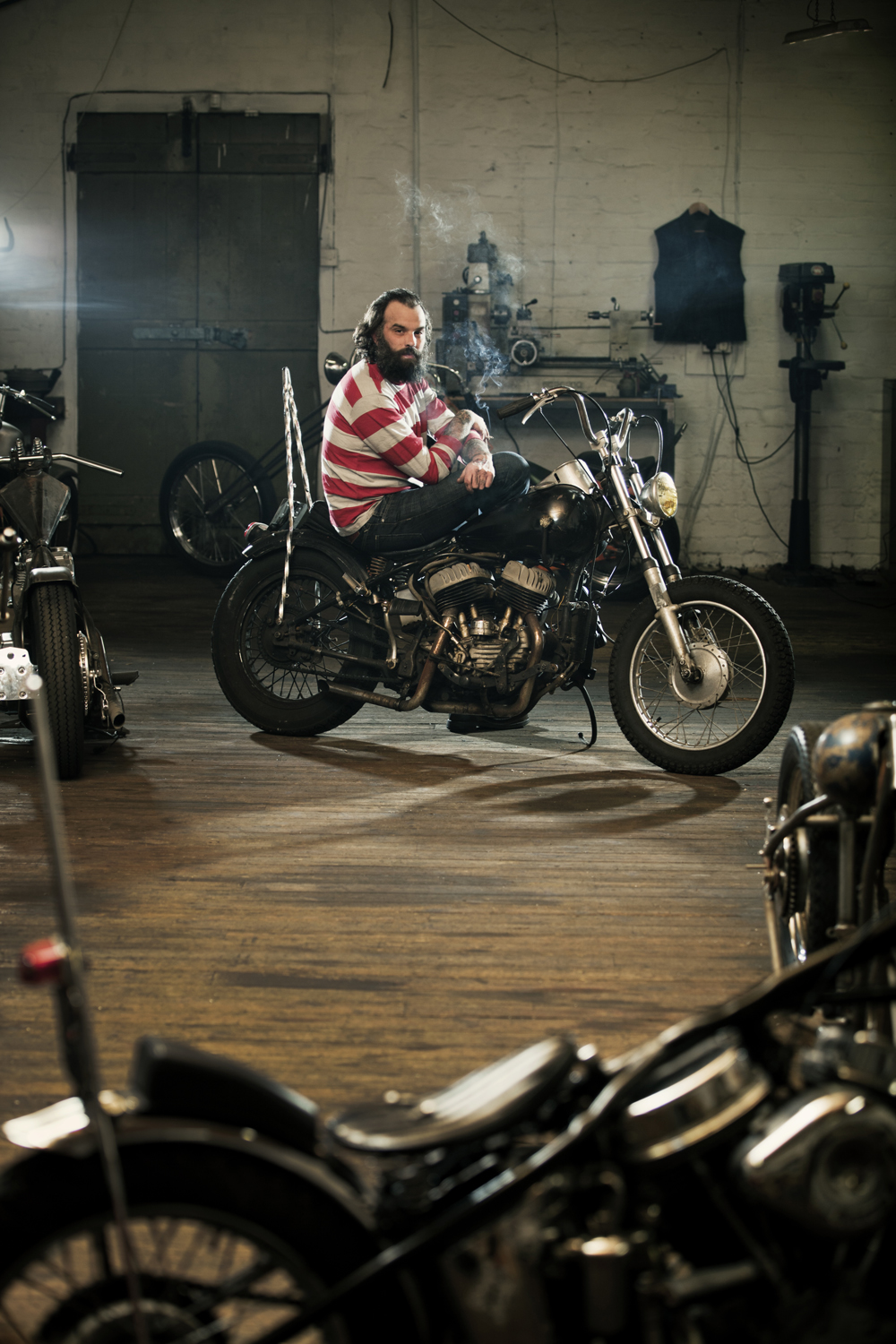