Based out of Melbourne, Australia, Little Mule is a custom bicycle company that builds their own frames. Besides the bike business, they also run a small cafe. Owner Hugh McIntyre takes time out of his busy schedule to tell us about what’s it like to own a bicycle company in “Bike City.” 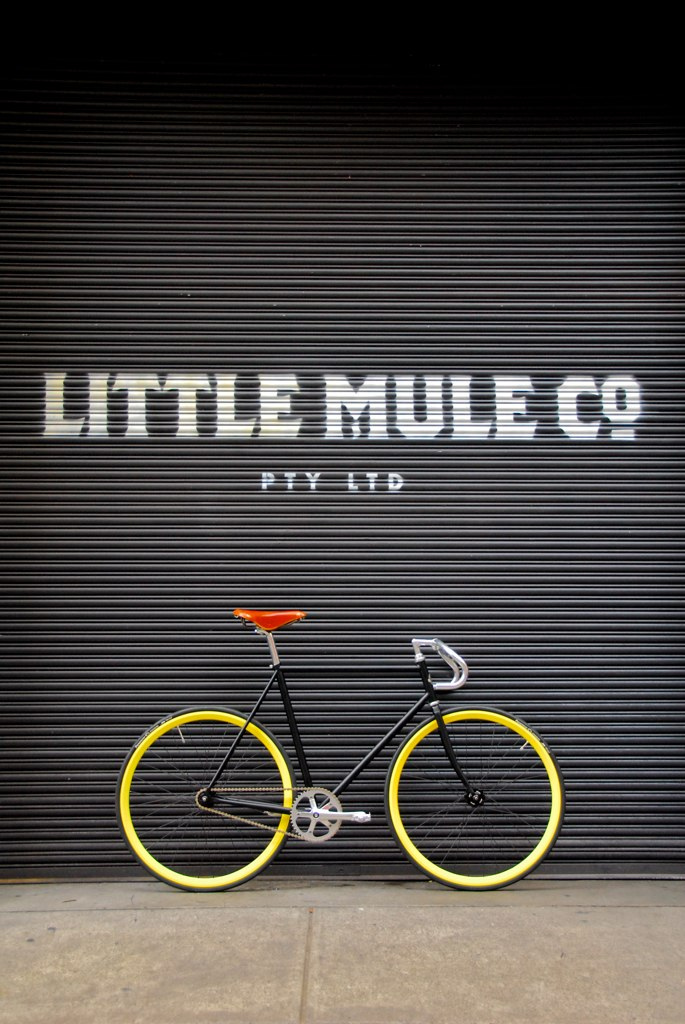 “All our bikes use the frame as the starting point. But by using this we are not limited to how the finished product can look. Just by switching a couple of components out like the bars, or by putting some classic white wall tyres on can make the bike look so much different. So our frames are the foundation of the end product.”
– hugh mcintyre

Read the entire interview with Hugh McIntyre after the jump below… 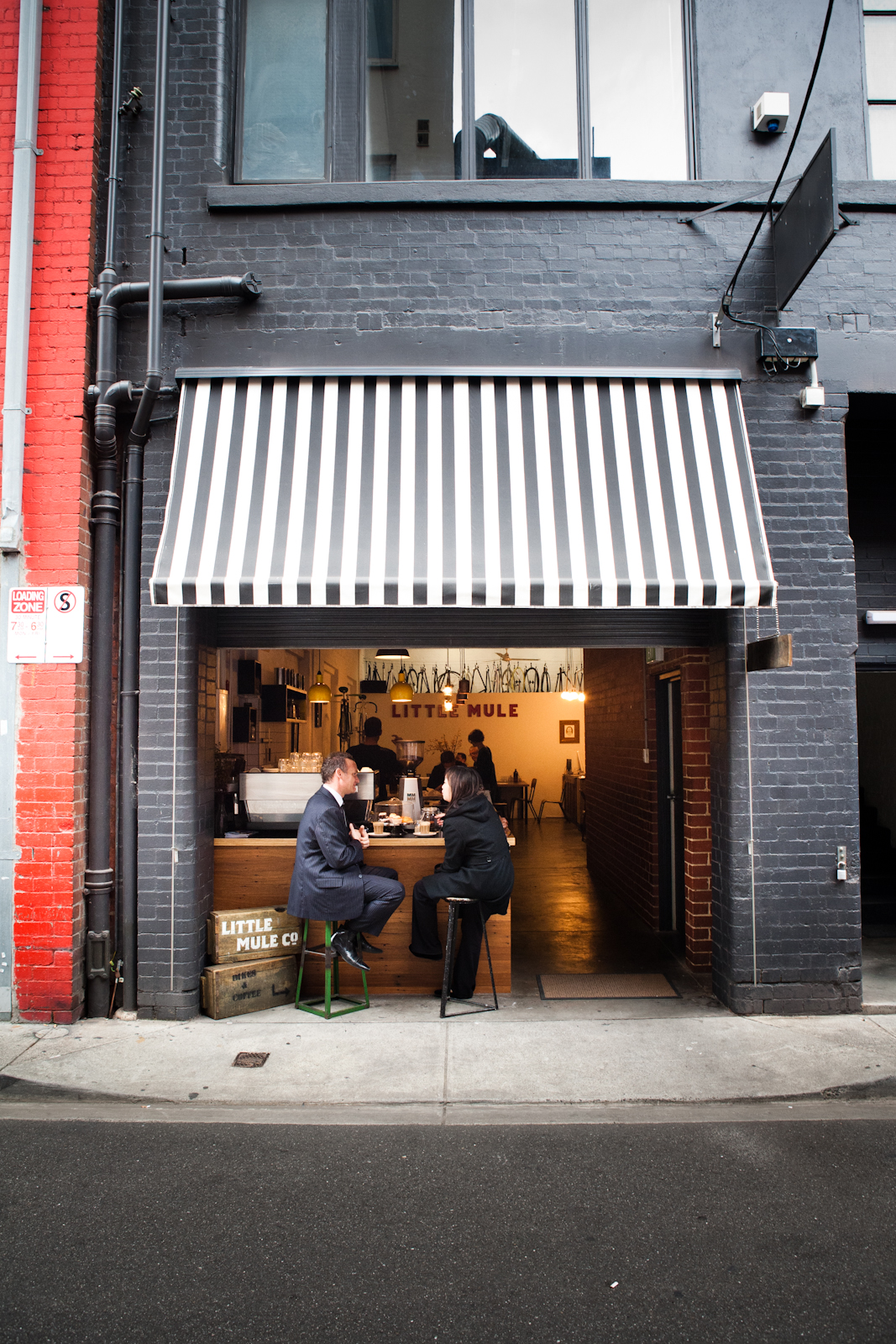 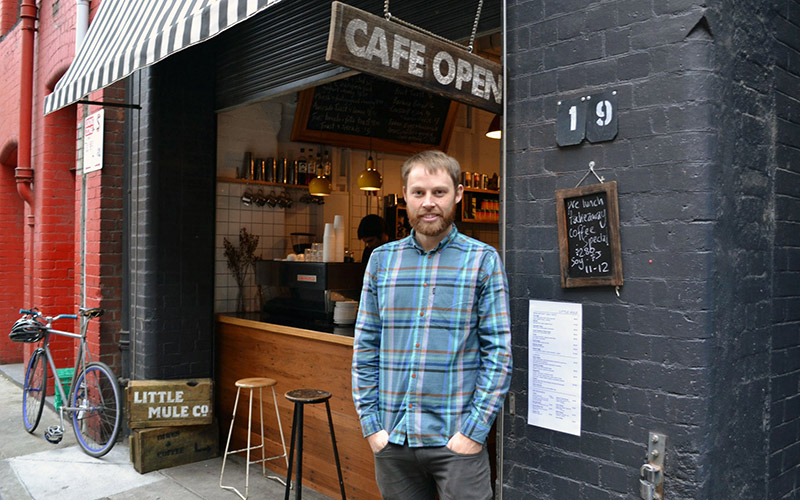 Hugh:
My name is Hugh, I work in I.T. One day I decided to try something a little different so I started The Little Mule Company with a work colleague. The business has been a thing for over 3 years now, but the store has just turned 2. I had an idea to sell fixed and single speed bikes online as they were just becoming popular in Melbourne (this was 4-5 years ago now). My biz partner found this warehouse in the middle of the CBD and next thing I knew we were signing lease documents.

It took us a year to get the place fitted out in our spare time after work which was ridiculous. The bikes were designed by a friend, he is a fair nerdy industrial designer type that puts a huge amount of attention to detail into whatever he is doing, it was amazing to see how much effort he put into our frames. We wanted to distance ourselves from a few other places opening up with cookie cutter catalog Chinese made bikes and do something that is unique to us. It was a difficult process going back and forward to the manufacturer to get everything right. In the end the product turned out almost exactly as I we had envisioned on paper.

First bike you ever owned?
My first bike was a bastardized custom BMX that I think was put together by my grandfather, I could be making that bit up tho. It is the earliest bike I can recall anyway, I was most likely 5 or 6. It was blue, and sometimes the rear hub seized up. I used to to the biggest skids on it. haha. 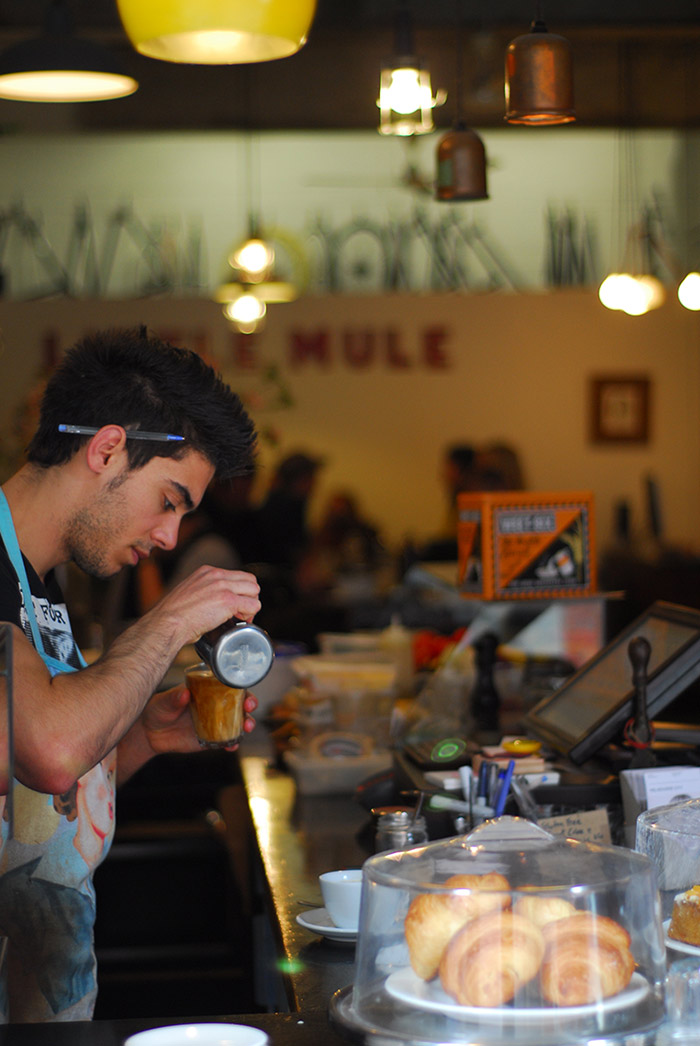 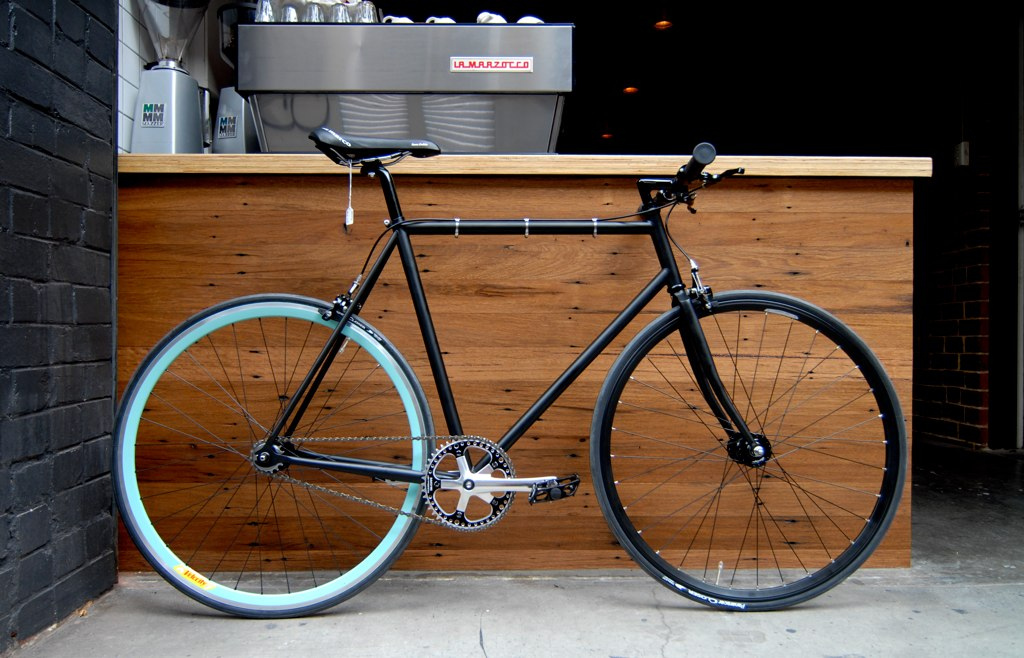 How did you get interested in building bikes?
Well I am a bit of a nerd and have always loved building computers and figuring out how things work. It was really Ben, the designer who pushed us to design our own frames. He’s now kitting out a workshop to hand make frames for us which is really exciting. I’ve put together so many bikes now i could do it with my eyes closed and i do love the moment you hand over the wheels to a customer for the first time and they have a little ride up and down the lane. Once it’s fitted to them and they have a big grin on their face it feels great to be able to do that. It’s probably why I do it now. 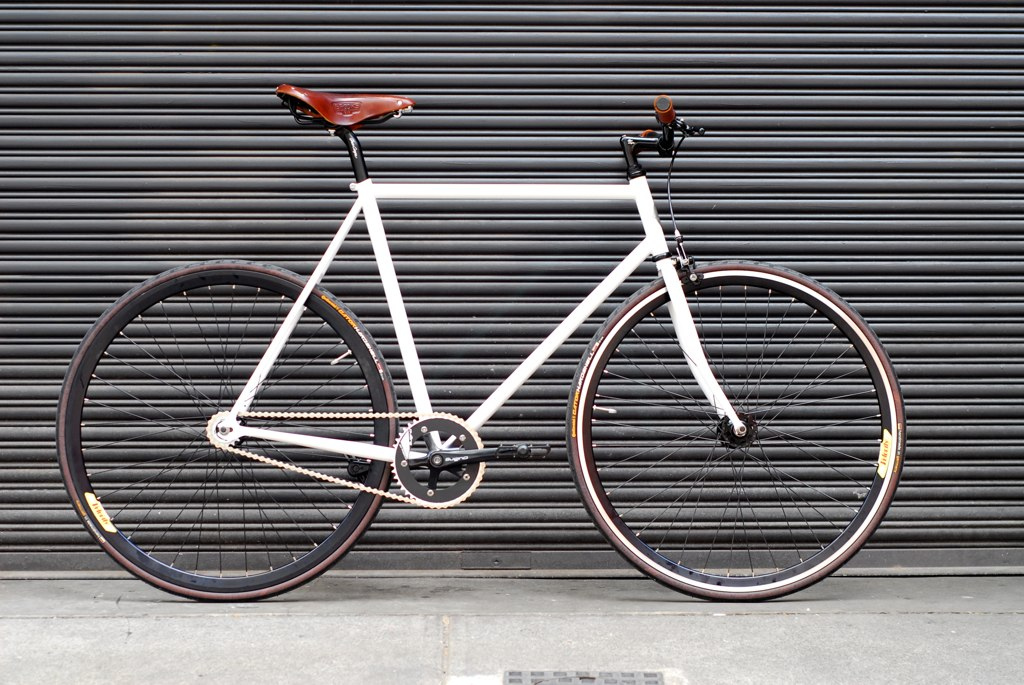 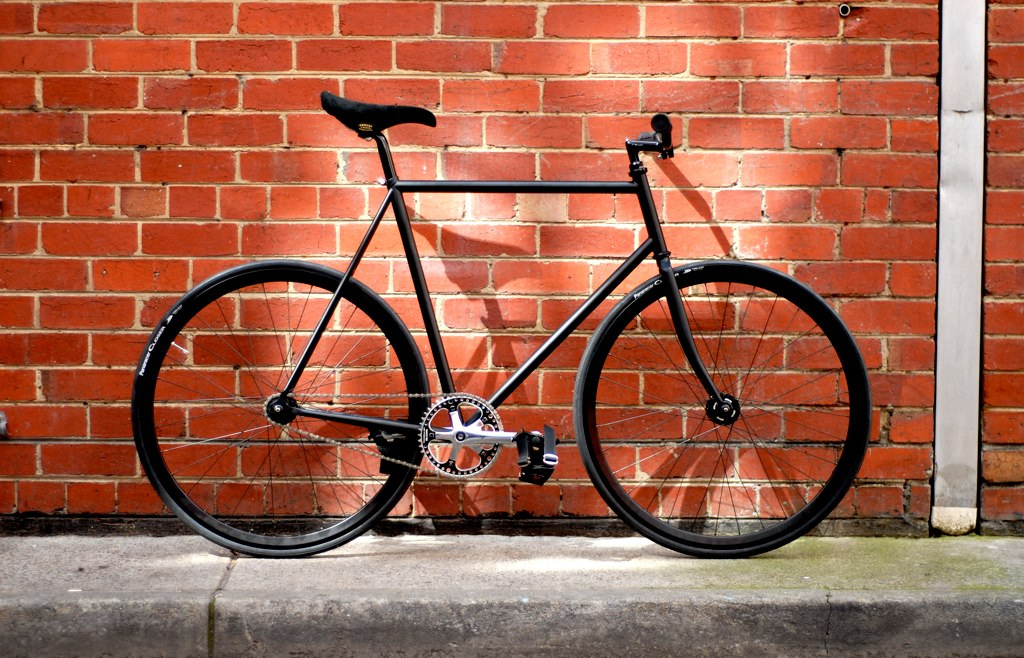 What common design thread do all of your bikes have?
All our bikes use the frame as the starting point. But by using this we are not limited to how the finished product can look. Just by switching a couple of components out like the bars, or by putting some classic white wall tyres on can make the bike look so much different. So our frames are the foundation of the end product.

Detail on of your bikes that you spend the most time refining?
Well if I look back on the hundreds of emails back and forth to Ben and the manufacturers there was so many little things that get lost in translation (even with the supply of technical drawings!) but the one thing that took us the longest time to get right was the head badge. Also designed by Ben, it is fairly intricate and we had several samples made from professional badge companies around the world to little success. In the end we went for an Australian based trophy company and they did an amazing job. It looks just like we wanted it to and the detail is outstanding.

Easiest/hardest thing about owning your own business?
It’s all hard, there’s nothing easy about it. I guess we’re a little different as my business partner moved interstate before we opened and I still work full time in IT and run the business on the side. This means I’ve worked about 70-80 hours a week for the last 3 years! Half of that is unpaid! It really is ridiculous and I keep telling myself it’s not forever haha. I have no idea what I used to do with all the spare time I no longer have. So yeah, hard part is time management and cash flow and I’m sure most small business owners would say the same thing! 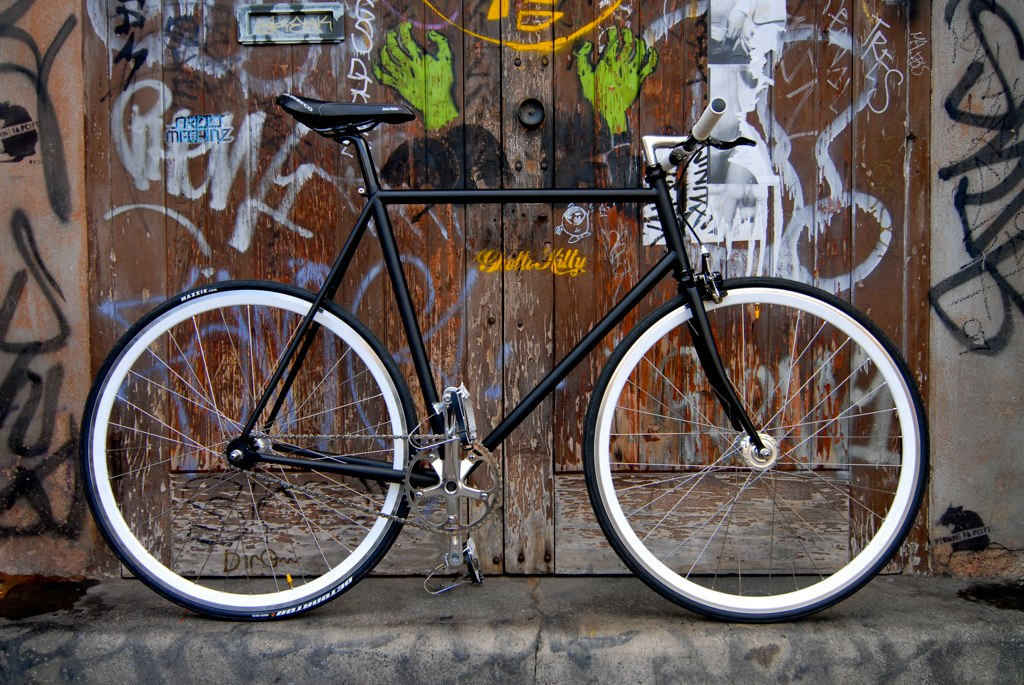 “Melbourne is a great city for riding. The whole place is really quite flat and there are lots of bike paths and trails to ride on. Something that might have been a surprise to many people, Melbourne was awarded a “Bike City” title from the International Cycling Union last year.”

Best compliment you ever got about one of your bikes?
One of our customers is this really good kid called Frankie. He looooooves his bike. It’s really awesome to hear how much he loves to ride it. Just to see that people use them every day and it saves them so much time and money and they get super fit! We are a pretty personalized service and I build and service almost every one of them myself so I hear it quite a bit. We just go a bit further with our service than you would get in your usual off the shelf type of bike store. 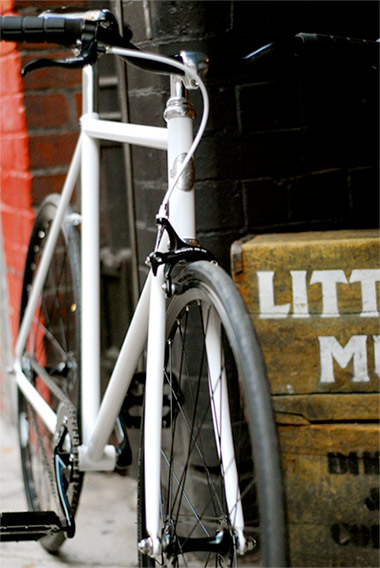 How is Melbourne different from other cities in Australia? What’s the bicycle scene like in Melbourne?
Melbourne is a great city for riding. The whole place is really quite flat and there are lots of bike paths and trails to ride on. Something that might have been a surprise to many people, Melbourne was awarded a “Bike City” title from the International Cycling Union last year! Not entirely sure what it means but it must mean something! There are loads of riders here. All ages, all kinds of bikes. I can really only compare it to Sydney and Sydney is really hilly and from my experience is quite far behind Melbourne with paths etc to make it easy and safe for bike riders. All that being said however, the local government here has decided to cut a lot of budget for future bike infrastructure plans which is a bit of a shame. Will see how that turns out.

Best place to ride a bike in Melbourne?
There’s loads of paths and trails here. There is a big ring called the Capital City Trail that goes the whole way around the city. But if you want to do some great rides it’s best to head out of the city up into the countryside a bit more. If I had any time that is what i would be doing! I just get to ride from home to the shop, from the shop to work and back again haha.

Phrase you use most around the shop?
I reckon the guys in the shop say “BAM!” about 500 times a day!

Please complete this sentence – if I had more time, I would…
Work a little less for sure. 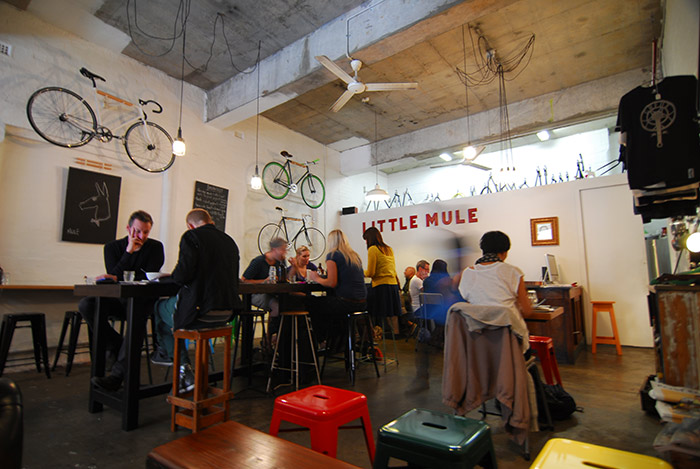 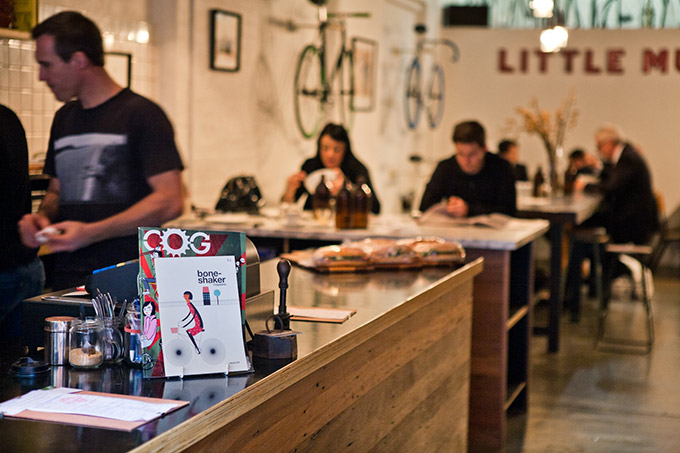 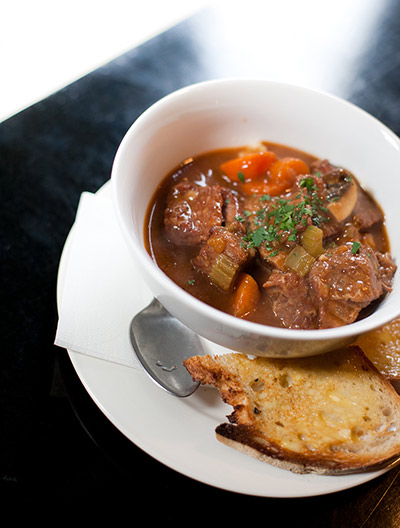 You also have a cafe serving breakfast and lunch. Can you tell about this and the food you serve? What’s the house specialty?
Yes we’re a cafe too! We barely have a kitchen so the guys do an amazing job pumping out breakfasts and lunch. There’s a toaster, a grill (another toast pretty much) and a sandwich press. All the food is made in house and it’s all homestyle cooking. Nothing fancy, you wont find many micro herbs or foams and smears of puréed things. If you want anything like that you shouldn’t be going to a bike shop to get it haha.

We made lots of slow cooked meaty sandwiches, pulled pork, jerk chicken, reuben sandwich etc. Half the guys that work for me are vegetarian so they’ve made sure I include some vego friendly items too! Julia has started making this amazing Iraqi/Jewish sandwich called the Sabich. It’s got fried eggplant, potato, boiled egg, mango chutney, hummus, salad and tahini sauce. It’s unreal. The soups are all vegan and we have toasties and baguettes on rotation too.

What’s next for you and The Little Mule?
We’ve almost outgrown the shop we’re in at the moment. I would love to move to a bigger location that has an actual kitchen and more space. It’s quite frustrating now thinking about all the things we could do! I would also love to start building our own frames and maybe push the bikes a bit more. If I take a chance and quit my day job I could probably pull it off I reckon! 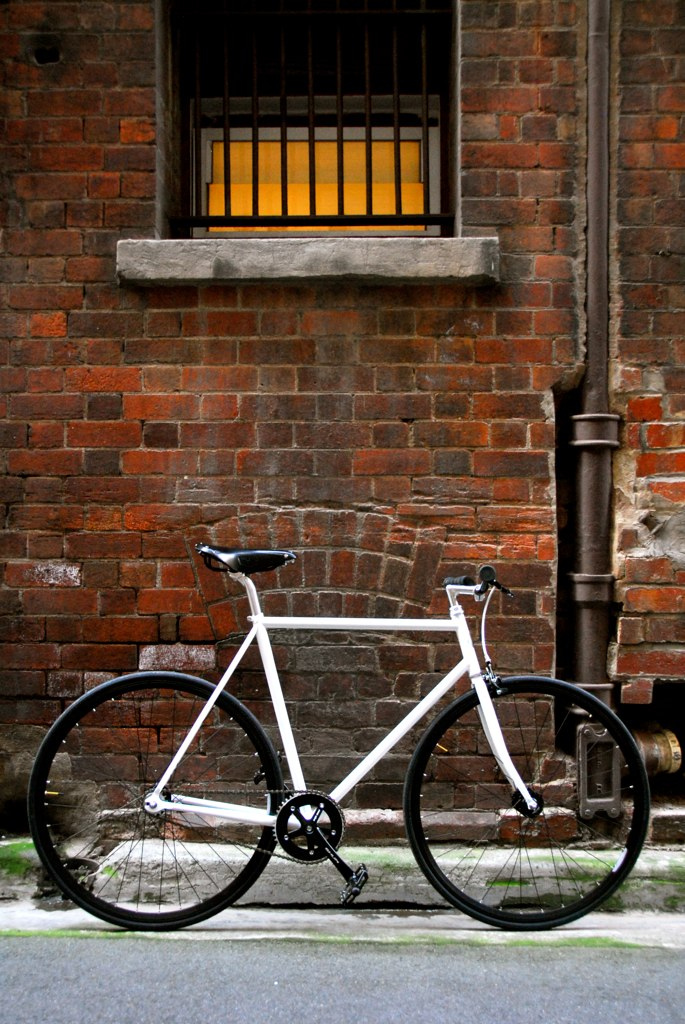 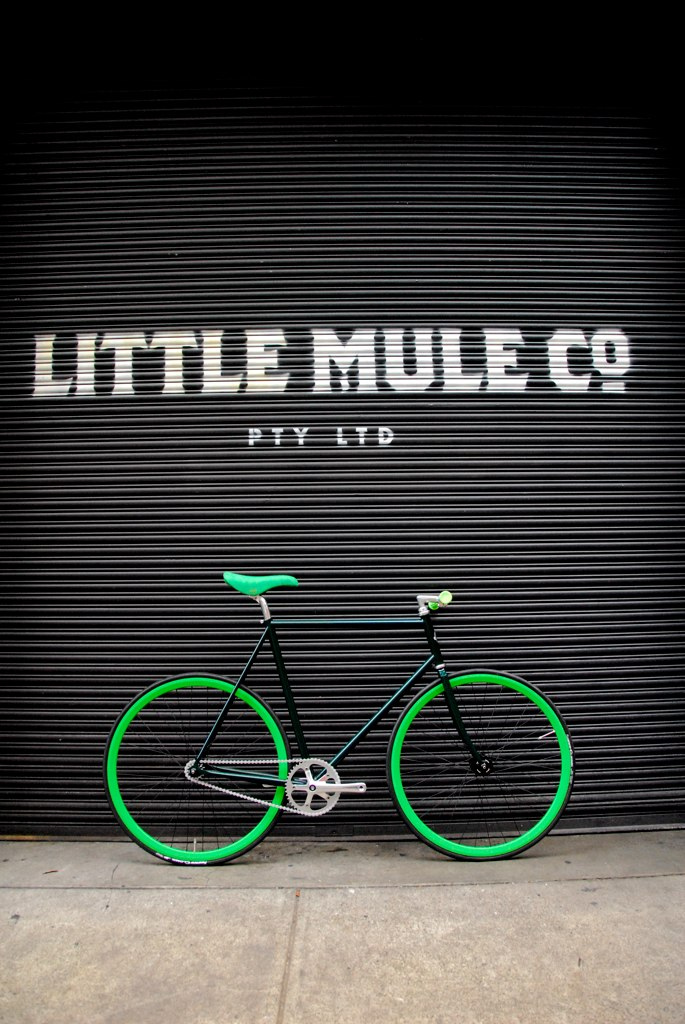