The Wall Of Death :: Interview With Benedict Campbell 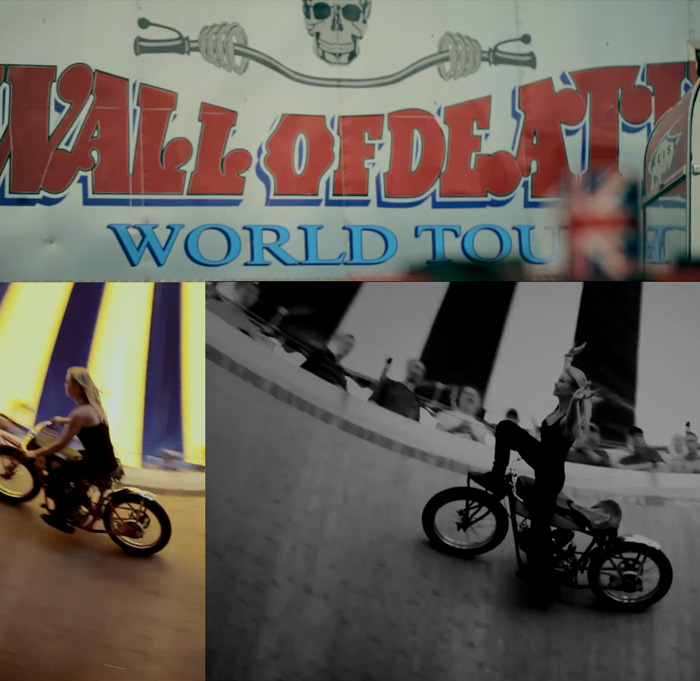 Documentary about the Ken Fox Troupe – the last remaining traditional family of daredevil wall riders to travel Europe and the British Isles. Tricks done on original Indian Scouts from the 1920’s.

From Wikipedia:
The Wall of Death or motordrome is a carnival sideshow featuring a drum or barrel-shaped wooden cylinder, ranging from 20 to 36-feet in diameter, in which stunt motorcyclists (or automobile drivers) ride and carry out tricks.

Benedict Campbell answers a few questions about this film and why he feels deeply passionate about wheels, “…two more than four.”

You started off as photographer, how long have you been making films?
I have been a professional photographer and CG artist for more than 25 years. Throughout my professional career I have gone in and out of film making, whether it has been commercials or personal projects. 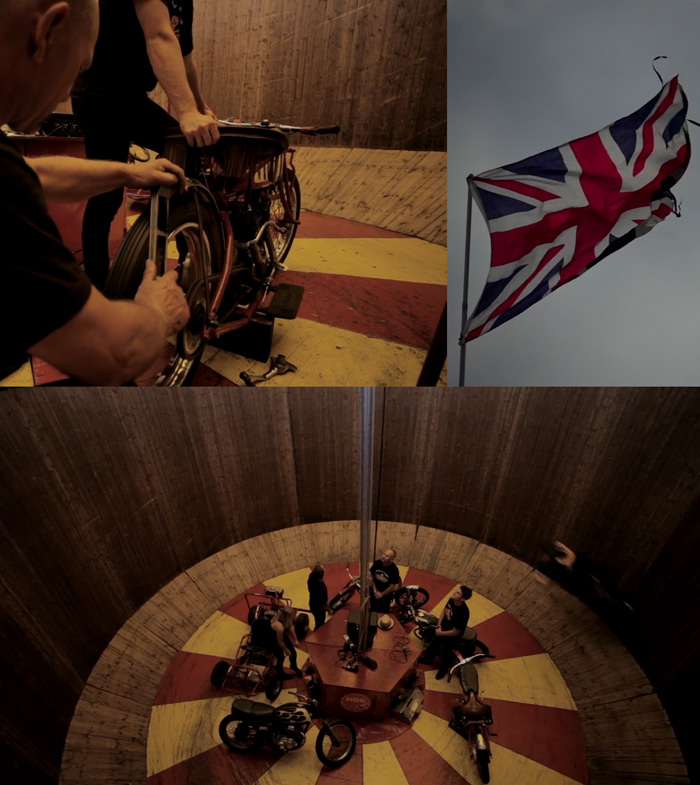 You saw the Ken Fox Troupe when you were young, what can you remember about that first encounter?
At my first encounter the sound and the smell and being excited and terrified at the same time, has haunted me for years.

Couldn’t help noticing that the Foxes don’t use helmets…
Ken told me that it is essential to be able to hear the engine note and the sound of the rubber on the wooden boards for them to remain confident. No one has ever told them to wear helmets.

The Fox Family the seem…so nice…
The wonderful Fox family spirit is very warm and accepting and they made me feel part of the family when I was filming and I didn’t expect to feel so attached to them. 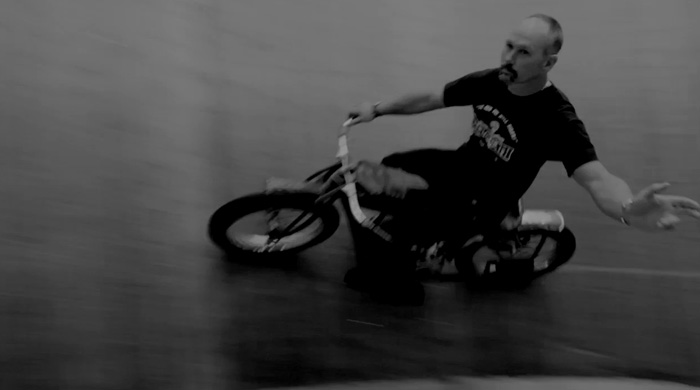 How many hours of video did you shoot for The Wall Of Death?
I was very selective, over a period of nine weeks I probably shot no more than ten hours of footage.

This is your second film about motorcycles, what about bikes attracts you?
I have always been deeply passionate about wheels, two more than four. As a young boy I raced road bikes/bicycles, now I do it just for fun and to stay fit. Professionally, I am fortunate enough to find myself surrounded by an array of motorbikes to ride.

Cafe Cowboy, your other motorcycle film, is about Dustin Kott of Kott Motorcycles. Can you tell me how that connection came about?
I met Dustin when I was shooting for Harley-Davidson in Los Angeles and he showed me one of his bikes. It intrigued me that a classic American was building British Cafe style bikes in California, adapting his passion to available resources, something that I am used to doing and admire. Dustin is a great guy and we got on like a house on fire.

Your B-rolls are so visually rich…I could frame them and hang ’em on my wall…
I am a big fan on B-roll technique; you can use it to get more flavour and more story.

What camera and gear did you shoot with?
I used a very minimal set up, main camera Canon 5D MkII, with a 50mm 1.2 and a 24mm 1.4 Prime lens, handheld, with no rig and just a Rode Video mike. The second camera was a pre-production Sony A77, that I was testing for Sony. The Canon was the main camera and the Sony was used for the slow motion. I also used a Shotgun mike and a Tascam DR-100 for off camera sound.

How did you manage to track the motorcyclists as they circled around you?
The panning was handheld, by spinning in a very small space. By the end of the filming I managed to get up to seven revolutions without falling over; it took some practice and it helps if your day job is photographing motorcycles.

I like to use black and white and colour to give a sense of timing and it helps to tell a story. It is an old trick, colour for warmth and comfort and black and white for a slice of time.

Really enjoyed the music. Who wrote and sang this soundtrack, and what were you going for?
Frank Pescod at Solebay Music and I work very closely together. He writes and sings quite a lot of the tracks in my commercial films and when I told him I was making this film he said he was interested in working with me. Frank and I had a discussion on where the film was going to go whilst I was still shooting it and I described to him that I wanted something very minimal, emotional, raw and unproduced. Frank came up with a great track that he was playing with and we took everything off except his vocals and a guitar and there it was.

Do you edit in your head while you’re shooting? Do you use a shot list?
I set out with a structured plan, but always keep an open mind, because you can quite often discover more of a story than you realized. The first day I shot I kept a very open mind, then I started compiling a much stricter shot list. I always mentally edit while Iʼm shooting.

Anything you left on the editing floor that you wish you could have included?
Tons and tons of lovely stuff. I have enough footage to make a much bigger documentary, but I set myself a 14 minute limit for a web film. Maybe one day some TV company will pay me to

Let’s say budget is not a concern, what film would you like to make?
If budget or time wasn’t a concern, a dream come true would be to do a film on Le Tour De France or some remote tribe or civilization, that I can relate to.

Who influences you?
So many to mention but Kubrick would be one of my all time favourites.

What inspires you?
So many things inspire me, music, light, people, travel, different cultures.

What do you like to do when you’re not shooting?
Riding and building my bikes/bicycles, paddling and racing my kayak.

Favorite documentary of all time?
Not sure of all time, but at the moment definitely TT3D: Closer To The Edge.

What’s next for you?
I am currently working on a couple of films for Harley-Davidson and trying to earn some money to fund another film next year. 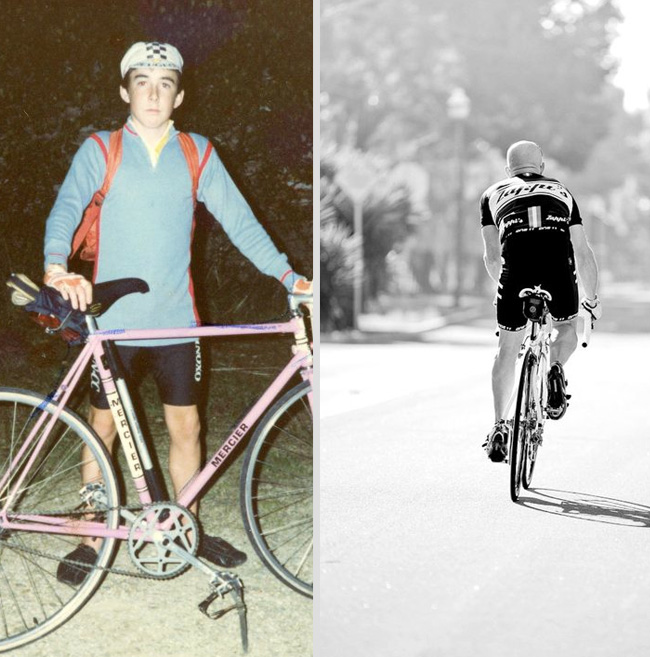 Benedict Campbell - Then and Now