Shinya Kimura of Chabott Engineering on why he doesn’t collaborate with clients, the reason his bikes are so hard to define, and his avoidance of sketching or drawing his designs ahead of time. 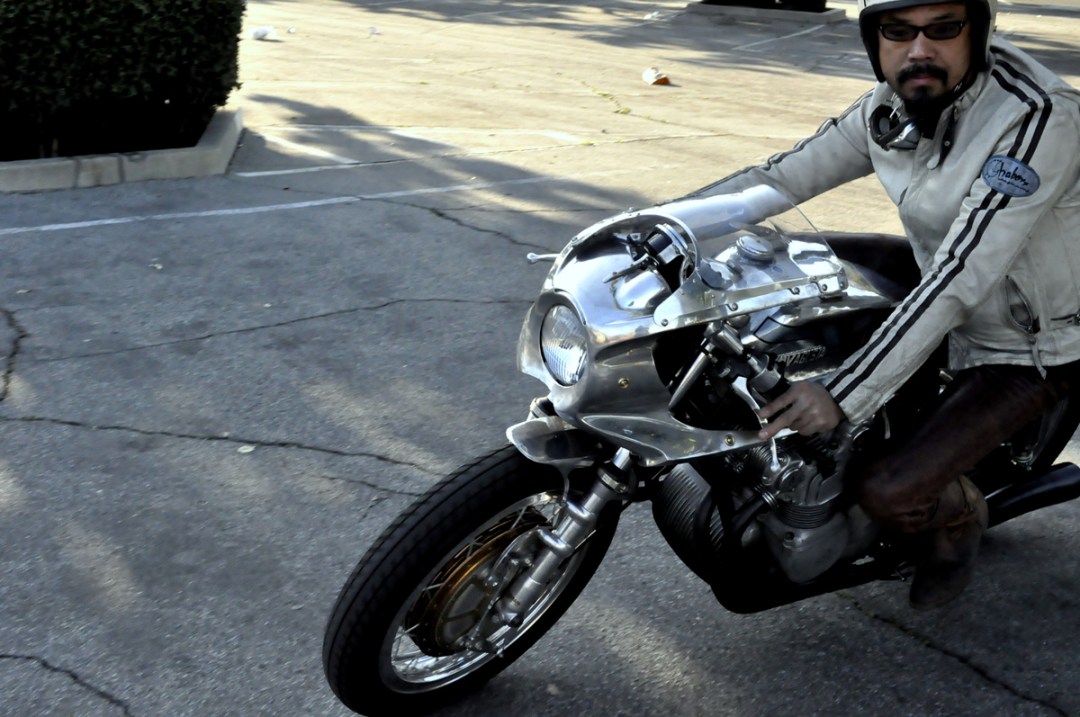 “A bike should look good on its own, but it’s incomplete until a person rides it. For me a motorcycle is more than art. It’s something that brings out my instincts, and the wildness and vulnerability within me.”
– shinya kimura

From Shinya:
Started as a motorcycle enthusiast more than 30 years ago in Tokyo, Japan with my first bike, Yamaha DT1, I became a motorcycle mechanic and restored many kind of motorcycles after studying entomology (!) in college. After about 10 years I shifted my career more to customizing and modifying mainly 30’s – 70’s Harley-Davidson motorcycles both mechanically and cosmetically. I designed and built about 300 custom Harley-Davidson with 5 other mechanics from 1992 to 2005 in Japan.

I relocated to California in 2006, I create functional motorcycles for my clients using any kind of motor with a playful touch at my own workshop called “chabott engineering”. Some people think that I’m just chopping around motorcycles but my underlying interest always stems from my respect for the original motorcycle and its history. I do all the engine work and fabrication all by myself.

I had been road racing ’42 Harley-Davidson WL in Japan and I’ve been participating in land speed race with ’46 Harley-Davidson (built for a client) at El Mirage and on Bonneville salt flats since I moved to California. 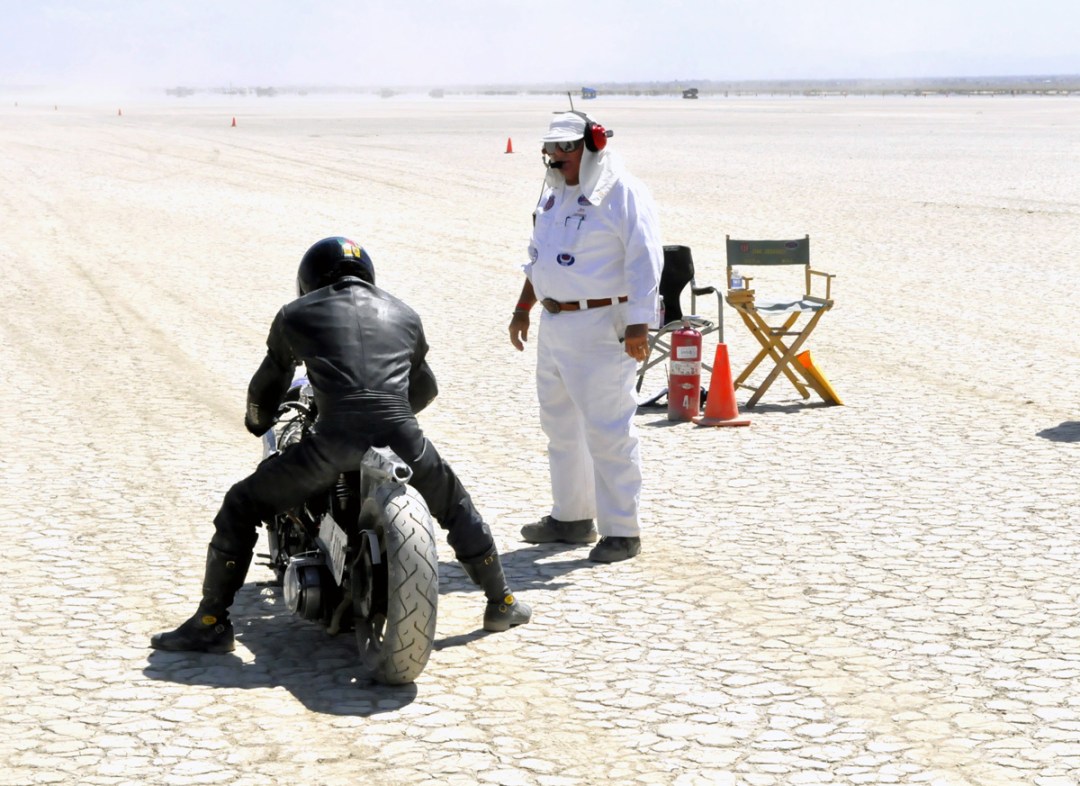 First bike you ever owned?
I found a wrecked Yamaha DT1 at the trash bin when I was 14 years old. I took it back to my house and fixed and modified it. That was my first bike. I actually bought a bike when I was still in high school and it was 50cc Suzuki OR. Had fun with it.

How did you decide that this is what you wanted to do?
After personalizing and customizing my own bike as a hobby for 6-7 years during my school life, I found it very amusing. At the same time, I found that my knowledge was limited so I decided to learn from the basics. I majored in entomology in college but I found a job at a big motorcycle dealership that had special service/restore department. The company had many branches all over Japan and each branch had their own service department. However, there were many troubled motorcycles that those mechanics had to gave up. Those difficult motorcycles came to the special service department where I worked.

I learned a lot there and I had the opportunities to work on many different kinds of motorcycles. Basically I restored, and repaired any make, any kinds of motorcycles there. I also learned “not to give up”. After 10 years, I decided to start my own repair shop. I worked on anything, any kinds all by myself but people started bringing in Harley-Davidsons and I started to take off all the big parts and make them clean and simple. People tend to put or add things on Harleys back then, so what I did was maybe different at that time. That was the beginning, I think. So I didn’t have any plans or objectives, but led it flow naturally and just followed it.

“I cannot describe my bikes in words because I just don’t know how.”

If someone has never seen one of your bikes, how would you describe one of yours bikes to that person?
It will be very challenging to define what I do because I have no definition. I like to be flexible and I prefer not to be categorized. Whether the person has seen or has never seen my bike, I cannot describe my bikes in words because I just don’t know how.

What year did you build your first bike?
In 1978 when I was 16 as hobby. Suzuki OR50, made it to a chopper first and then a cafe racer later. Of all at the bikes you’ve ever built, which is the one that you’re proudest of?
Every time it’s challenging and every time I say I would never do this again. I do it with the sole purpose of seeing the completion. After the completion, I get my mind off of everything. The gains quiet the pains…I forget everything and just move on to the next one. So, I just can’t choose one proudest bike. I do have some emotionally attached bikes but can’t think of any “proudest” one.

You’ve given countless hours to your craft, what has building bikes taught you about yourself?
To gain pleasure by creating something requires tolerance.

What’s your favorite detail to work onn?
Never thought about that. A collection of discrete detail makes a whole bike…so can’t choose one. It’s easy to see that you like the desert…
I like the land speed races that are held in the desert. 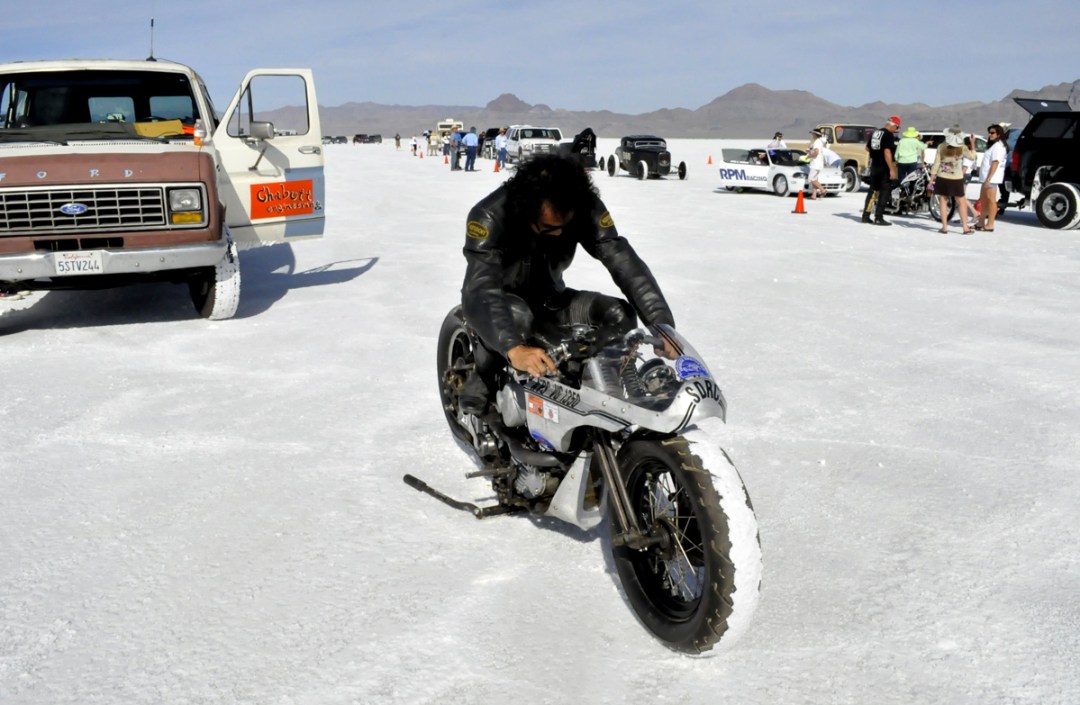 How have your bikes evolved from when you first started?
Basically I’ve been having the same motivation but technique, skill and knowledge of tools and machines are growing so it have enhanced potential.

Most hours you’ve ever put into a bike?
Never count hours. That’s nonsense to me. I just do whatever it takes until I get what I want.

How do you like to collaborate with your clients?
I don’t collaborate with them because I believe that there must be one designer on one design. So I basically don’t reflect much of the client’s ideas. It often becomes a distraction because when it comes to designing, the most important thing for me is the balance and harmony as a whole motorcycle, the motorcycle and the rider, and the motorcycle and the landscape, so I don’t see just one section or one part but see it as a whole.

Of course I take a client’s preferences but not on a design. Rather than talk about motorcycles, I spend time with my clients, talk about their favorite music, movies, food, anything more about themselves. I get a lot of inspiration from them, their images, personalities, shapes and things they wear, etc.

I gave my clients a lifetime warranty so our relationship continues even after the bike is done.

In the film, you say that you’re not inspired by any particular thing and that you don’t draw. How do you go about creating something?
People are surprised when I tell them that I make no drawings or sketching when I build a motorcycle. I don’t have any plans at the beginning and if I draw, it’s already done on the paper and I lose my interest. So the process is completely hands-on. I’m just scrabbling on metal just like doodle on a note pad. Instead of using eraser, I remake it if I make mistake or if I don’t like it.

There are no motifs that I use to create things. I said I’m not inspired by any PARTICULAR thing because I think with every different elements coming together to create something.

“People are surprised when I tell them that I make no drawings or sketching when I build a motorcycle. I don’t have any plans at the beginning and if I draw, it’s already done on the paper and I lose my interest. So the process is completely hands-on.”

Distinguishing detail that all of your motorcycles have in common?
Gee…I don’t know. I do everything from start to finish which gives all my work that unique Kimura touch, I guess.

How much custom metal fabrication is there on your bikes?
Pretty much all exterior and frames if necessary.

In the film you say, “A bike should look good on its own, but it’s incomplete until a person rides it.”
To me, to just design and build a motorcycle and design and build for a client or for somebody are totally different. Imagine the client riding…it brings out some alien concept or ideas that might never come out from me if I’m just working without him/her. I exclusively build one for that particular rider and I think that is and should be what a custom motorcycle is all about. And that’s why it’s complete when that person rides it.

How long does it take to create one of your bikes? How many bikes do you produce a year?
Since I don’t count I can’t be accurate so I always say 6 to 8 months. I build a couple per year. 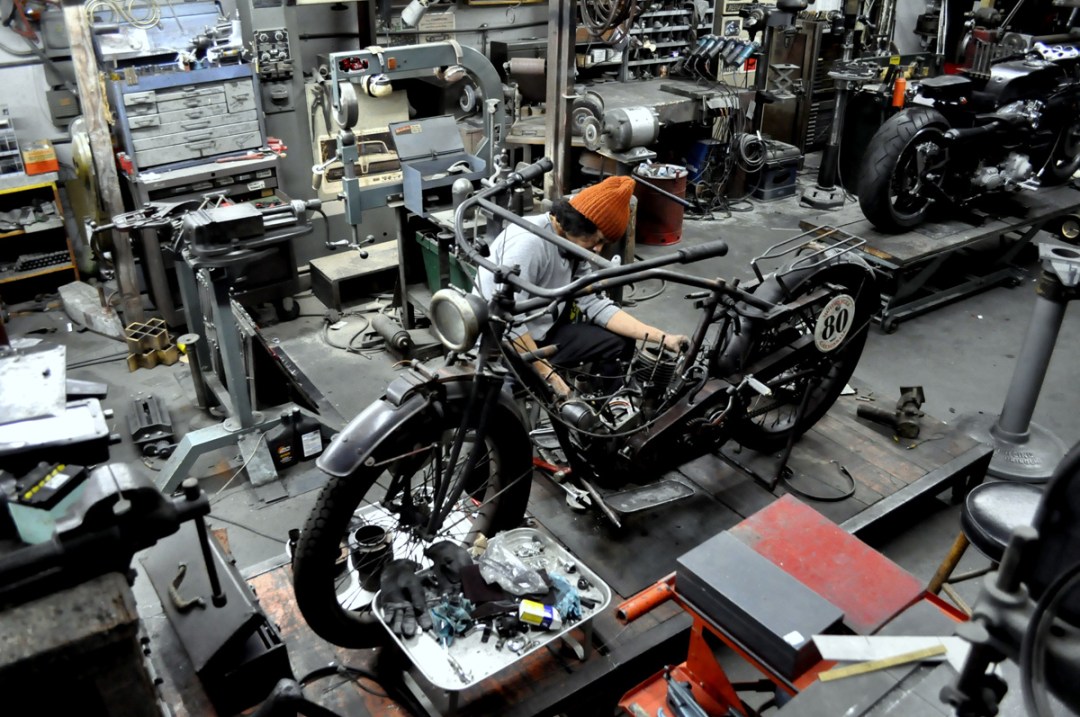 What music are you listening to in you garage?
Jazz. However, when I’m concentrating on something, I hear nothing. When I’m not, I enjoy jazz and all kinds of music. I just set my radio at the workshop to the jazz station.

Favorite place in the world you like to ride your bikes and why?
It depends on the bike… but I really enjoy test riding in the canyon right behind my workshop.

Favorite motorcycles of all time?
Right at this moment, I’ll say Ducati 750S from 70’s, ’69 Yamaha DT1, Suzuki GS1000R from 80’s…if I can include just a motor, I’ll say Harley-Davidson knuckle engine. There are so many bikes that I love especially those pre 1970’s. Wait a minute, I like some from 80’s, too. Man, I just love motorcycles!

How would friends and family describe you on a good day?
Goofy, which I’m not!

What’s next for you?
Harley-Davidson modern sportster.

Just in case you haven’t seen the video…here it is again.

Thanks Ayu for all your help!