When I get an email from Richard Pollock of Mule Motorcycles, I always get a bit excited – it’s like getting the ultimate care package. Once again, Richard did not disappoint: a makeover for a Steve McQueen Limited-Edition Triumph. The other bonus about receiving a build story from Richard: being a natural storyteller, he knows how to spin a yarn. So, I give you the story of this build as told by Richard himself. 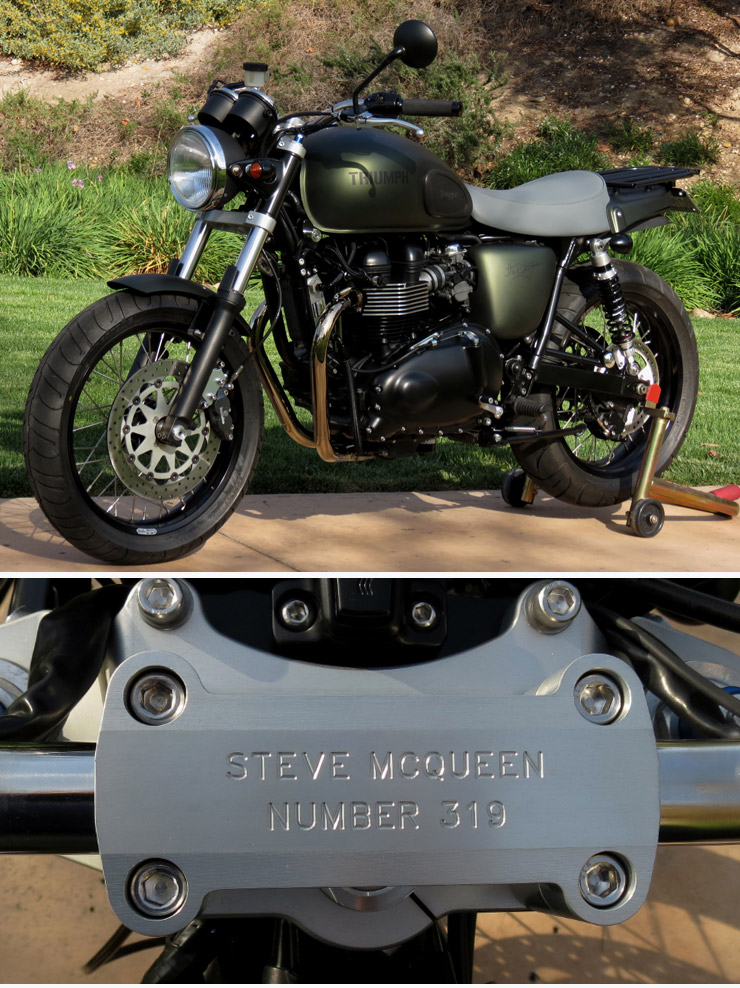 “Steve McQueen liked bikes and cars, not because it enhanced his celebrity, but because he was a gearhead first. He bankrolled ‘On Any Sunday’ not for himself, but rather to promote the fun and camaraderie of motorcycle racing and riding, and also to showcase the guys that were his true heroes.”
– richard pollock

Generally speaking, I love the new Triumph twins. To me, they’re an incredible starting point to build from. They’re super reliable and the chassis’ respond well to all sorts of upgrades. A builder’s dream. I guess that’s why you see so many currently being built. All that said, Triumph seems to have some odd ideas for “Special” models, merely changing colors of the paint, the seat cover and fitting strange handlebars or exhaust. If it were me, I’d funnel much more of the factory design energy into getting the basic platform to be closer to the wasp-like proportions of the original Bonnevilles or Scramblers and give them some umph! 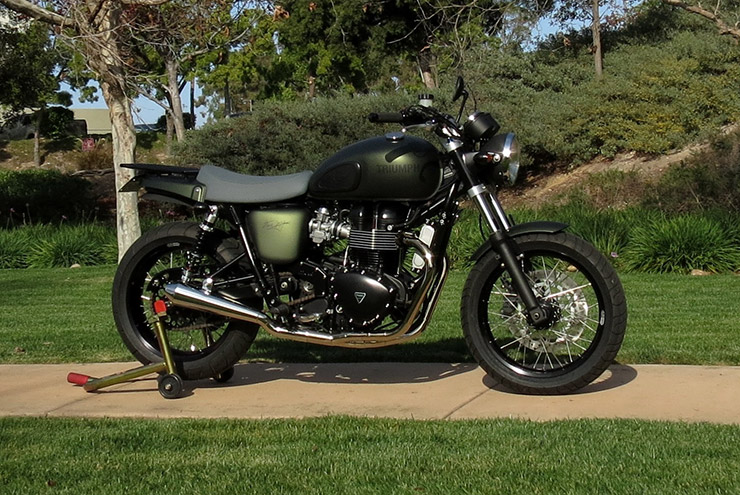 This project began with a call from San Francisco. The intent being to build a trick, unique, Bonnie based, everyday street bike to replace a Steve McQueen limited edition unit recently stolen. The email and phone discussions based on how extensive the build was to be and whether the donor bike would be provided by the customer or the builder. The customer is a designer himself and for sure wanted something very unique! The emails ended for a week or so. Then, the news that the stolen bike had been recovered!! This bike would become the basis for the build. 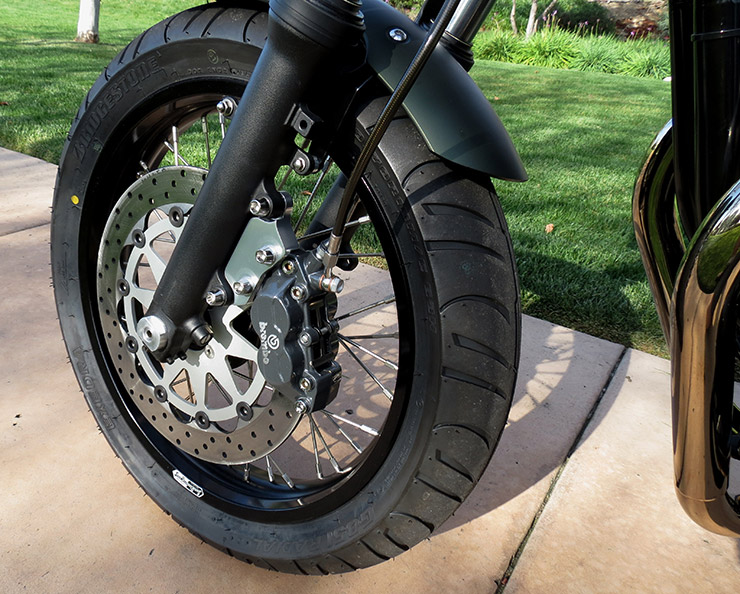 As is my preference, I was given free rein to design the build and make improvements that would yield the most improvement for dollars spent. There was a bit of theft damage, but nothing that couldn’t be dealt with. There were just a couple of guidelines. Keep the paint in the original SM green, 2 into 1 exhaust, larger (actually functional!), luggage rack and most important…retain the heated grips! It gets cold riding in S.F.!

“Generally speaking, I love the new Triumph twins. To me, they’re an incredible starting point to build from. They’re super reliable and the chassis’ respond well to all sorts of upgrades. A builder’s dream.” 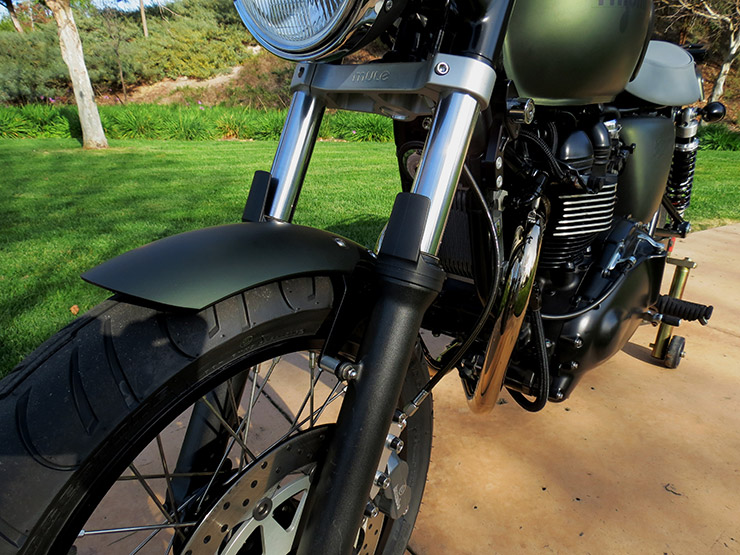 Having built 25 of the triumphs now, I’ve developed a group of components that give lots of bang for the buck. Steve McQueen #319, as this bike came to be known. There was a run of only a 1000 built, got Mule triple clamps, Racetech re-worked Yamaha R-6 forks, Brembo front rotor and caliper, Mule lightweight hubs (the rear hub being 14lbs lighter than stock!), Mule 2-1 stainless exhaust, Racetec/Mule shocks, Mule oil cooler kit, stainless bars, 18” Sun Rims with stainless spokes and Bridgestone tires and lastly, motor work taking the stock motor to a whole new level of performance. Headwork, cams, 904cc kit and a Power Commander for tweaking the fuel injection. 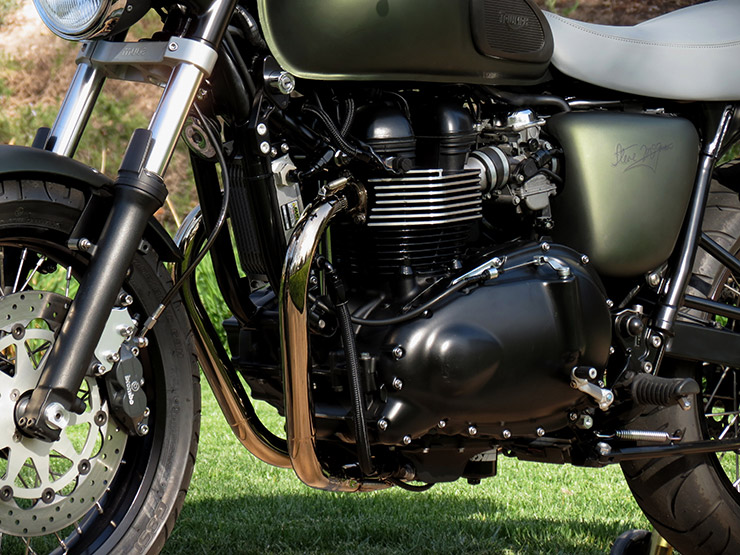 A custom front fender mount attaches the severely trimmed stock fender to the R-6 forks and the rear fender that nearly wrapped all the way around the wheel was trimmed leaving just a hint of the original under the seat. A custom luggage rack required its own weld fixture to fabricate and uses nothing from the original rack except the mounting location and color. 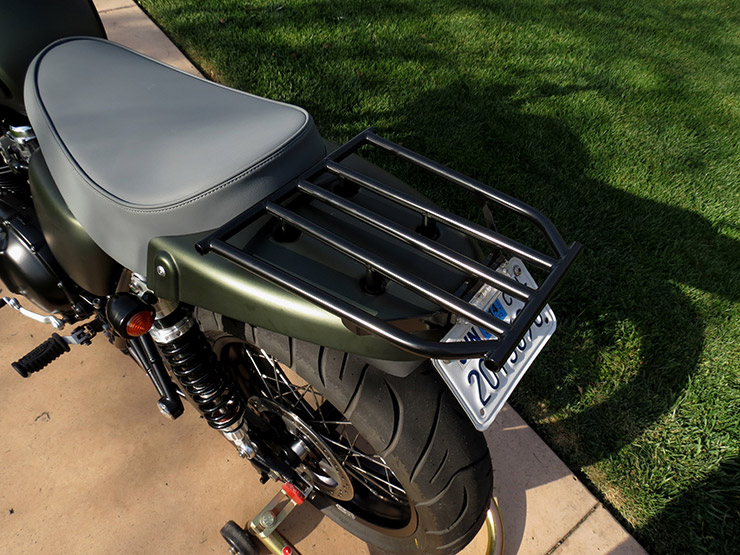 I hated to see this bike go. The ride is like a bike bearing the Steve McQueen namesake should be. Exciting, fun with a performance look. Much more than merely a paint job and stickers.