Andy Copeland has garnered worldwide attention for his first build – the Express Post. Andy’s bike has a certain whimsical madness that instantly put a smile on my face. That, and I no longer have to imagine what a Shinya Kimura and Chicara collaboration bike would look like. 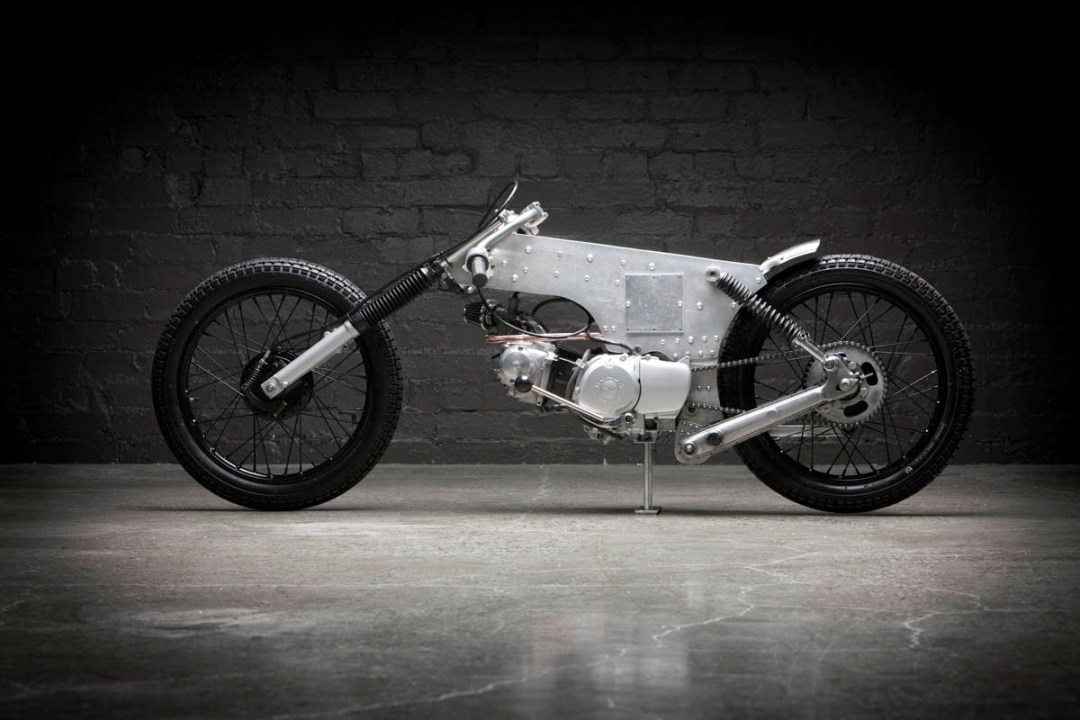 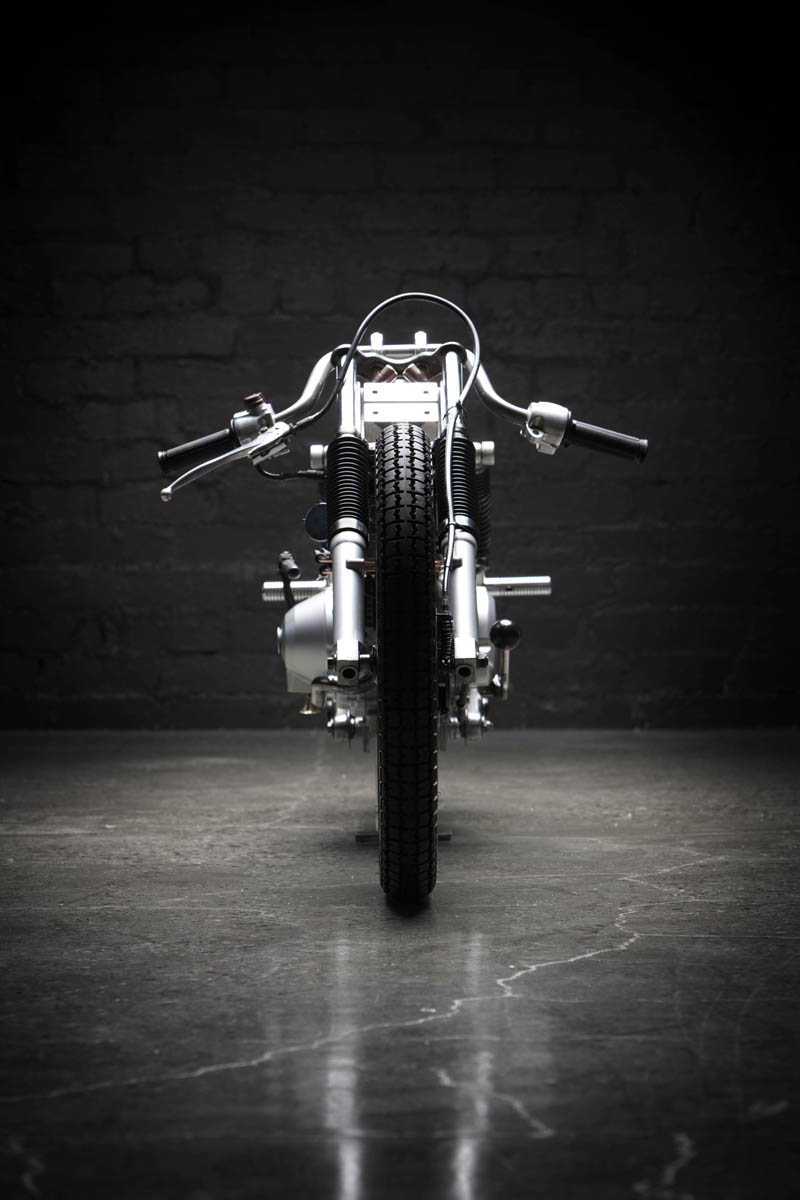 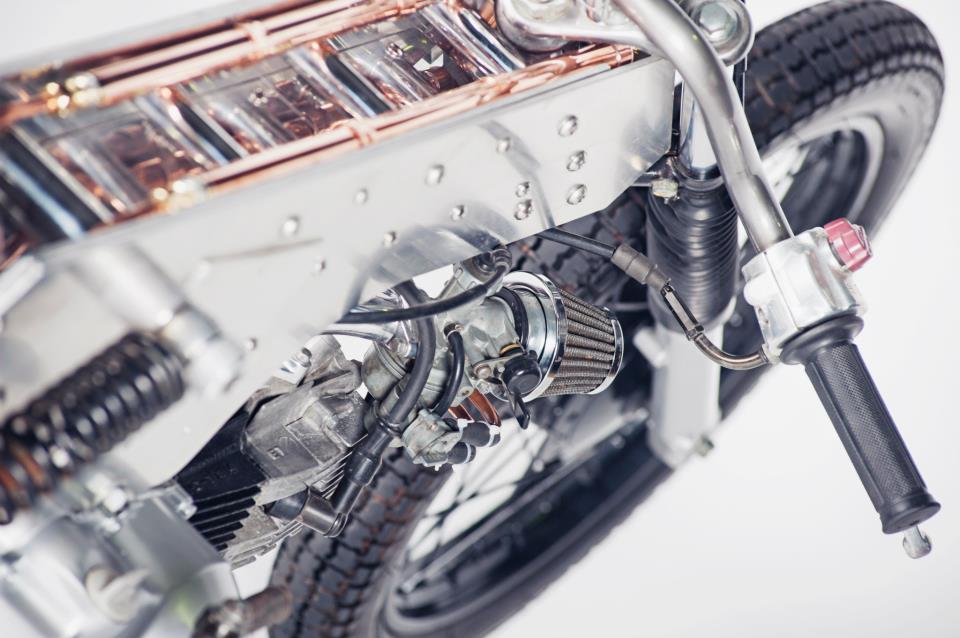 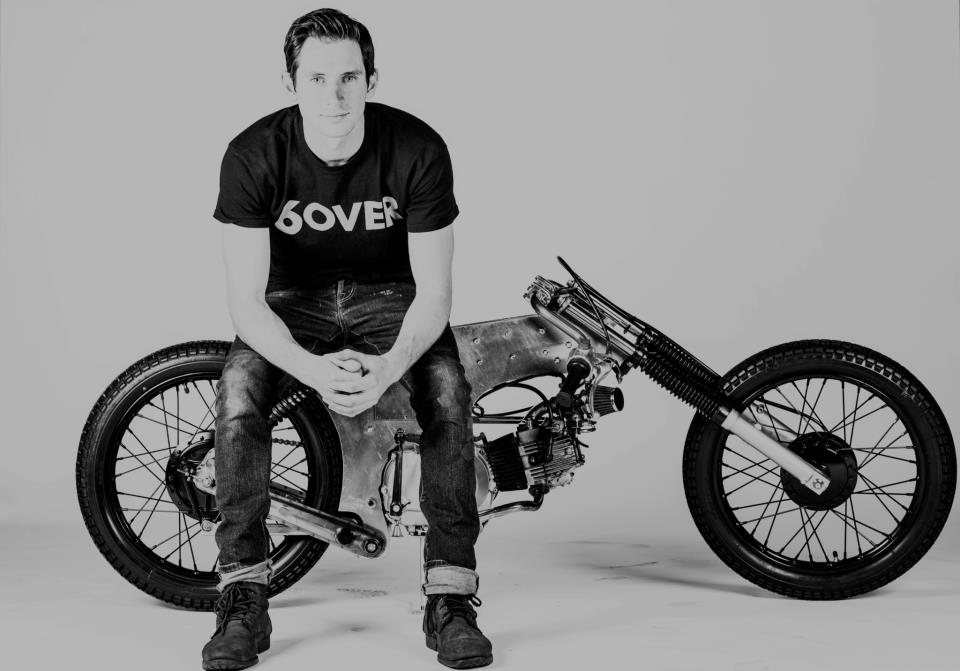 “When I finished in the early hours of the morning I surprised myself. I found myself stepping back at one stage and laughing like a mad man at what I had created.”
– andy copeland

From Andy:
My name is Andy Copeland, I’m a 24 year old architectural draftsperson. My lunchtimes are spent sketching details, finding materials and hunting for parts for my nights in the garage. I started out with old cars but I quickly ran out of room working in a small garage and my attention turned to motorcycles.

My obsessive passion for motorcycles really kicked off when I accidentally purchased a xs650 Yamaha (put in a low bid on ebay and got very lucky). 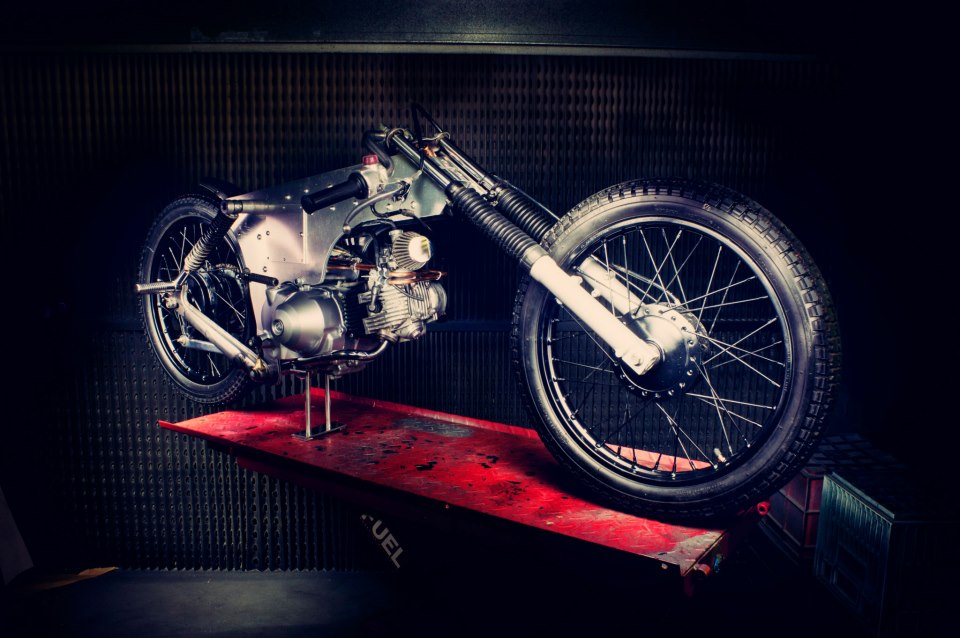 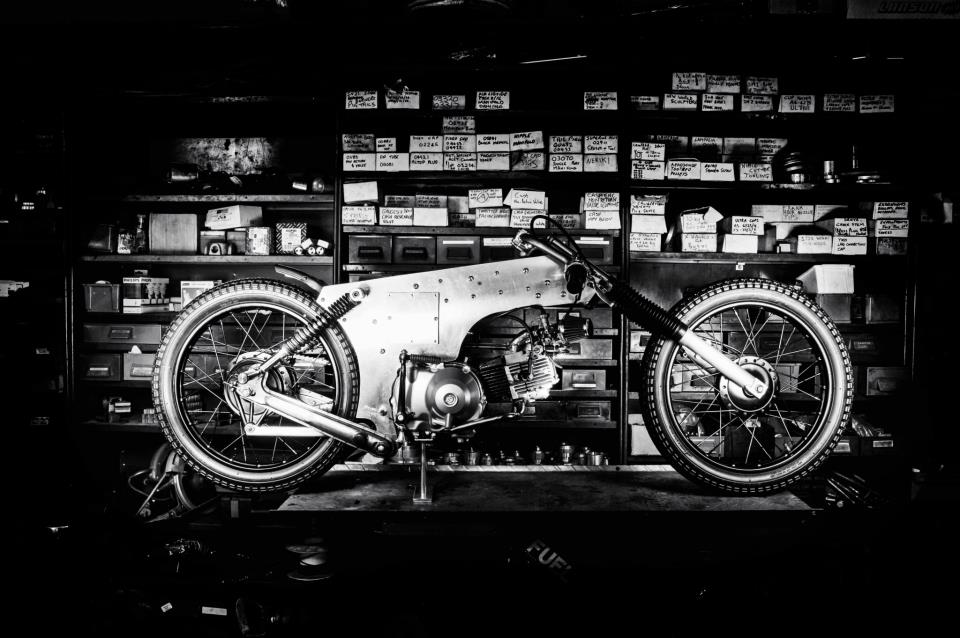 Your Honda ct110 has been getting worldwide attention from bike aficionados and blogs alike. Can you give me little background on why you decided to build this bike, and what you were going for with this design?
The bike was built to be entered into the Rusty Kustoms budget ‘Biker Build Off’, put together by a few mates. The rules were short and simple; max250cc, homemade, built on a low budget and most importantly it had to complete the course around the block to be eligible to enter.

The attention has been mind-blowing. Seeing my bike pop up unexpectedly on the blogs that I personally read every day throws me off my seat. When I finished it I knew it was different and that it would attract some interest – but never expected the level of attention that it has so far received.

“The physical build of the bike was completed in 4 weeks working most nights after work until 1-2am. Prior to the physical build I had sketched drawings what needed to be done and had a list that I worked through methodically.”

When I first found out that you built it from a Honda ct110, I shook my head…brilliance and madness at the same time came to mind. Did you envision the end result in your head?
The bike came first the idea came later. I never intended to modify it. It quickly became a dream – a ‘what if’ that had been dreamt up and calculated meticulously in my head. When the build off was announced it was the perfect push for me to have a go.

Where does the name Express Post come from?
As it’s made from a postman’s bike I’ve called Express Post. 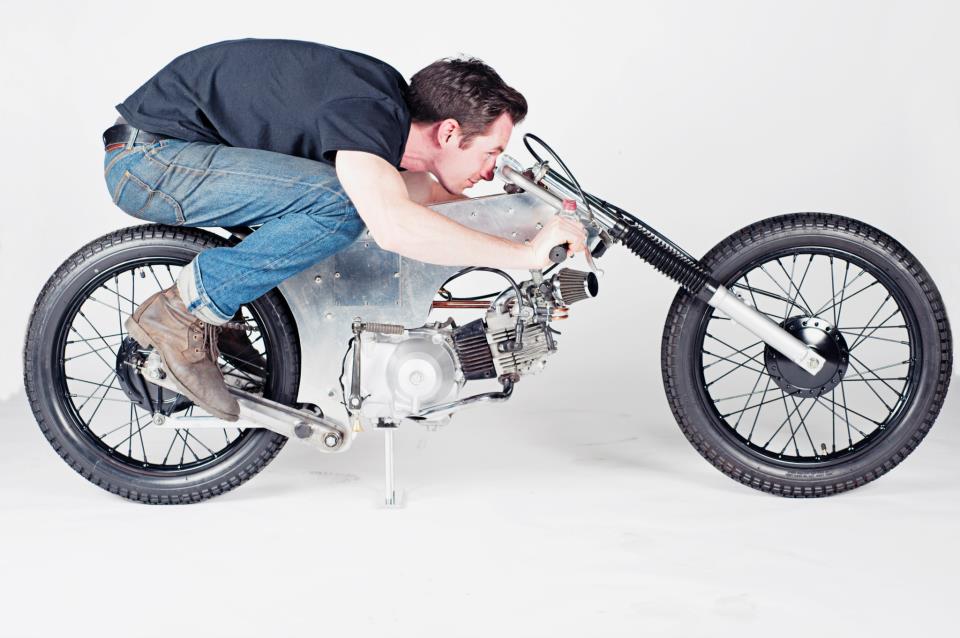 You built the Express Post to obtain your motorcycle license. So how did the Rusty Kustoms Biker Build Off come into the picture?
I’d never ridden a motorbike in my life prior to this bike, I wanted my license and I wanted it fast so I bought the bike cheap rode it for a few days, got my license on it, then parked it. It wasn’t until the Rusty Kustoms ‘Biker Build Off’ that the mischief actually started.

The build off came into the picture based around a large group of friends ideas and discussion. The group is mainly based around cars but there was always talk about motorbikes and a low cost fun route was the perfect avenue to get everyone involved.

Let me get this straight, with two nights left before “the reveal” you had no wiring or fuel system?
Yep! I am very much a last minute person and get very caught up perfecting details losing all concept of time. I was fortunate enough to have a developed a clear idea of how I would start and finish the fuel and electrical system. My biggest issue was that I had never brazed, bent fuel lines or tried my hand at modifying a wiring harness. Thankfully things turns out as planned but it’s was a full two nights of many mistakes and headaches learning as I went.

But you got it to the track…what was that experience like – going from build and design to actually riding it?
It was defiantly a shaky one. Half way I had it mocked up in wood, I carefully sat on the bike with it clamped together, it creaked, flexed and wobbled, and I knew from then it wasn’t going to be like your normal ride. At the start line it idled fiercely popping away, the starter flew up the flag, and with a half twist of the throttle it wobbled violently as I cautiously moved off the line, with another full grab of the throttle I swept my legs back and the bike tracked into a straight line. Corners were better than I expected by gripping the bars firmly and a gently leaning the bike made it way around the track successfully. 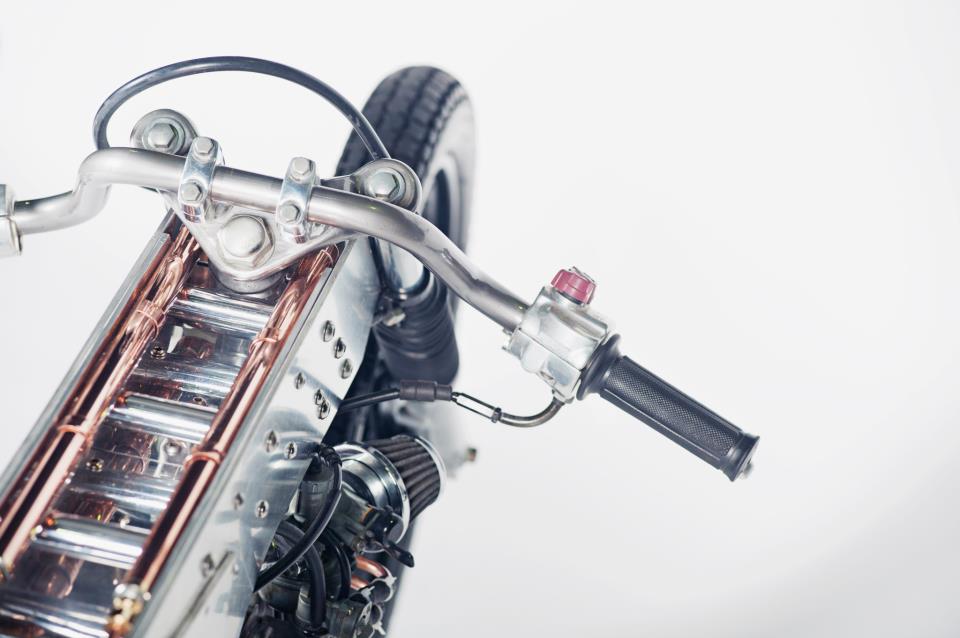 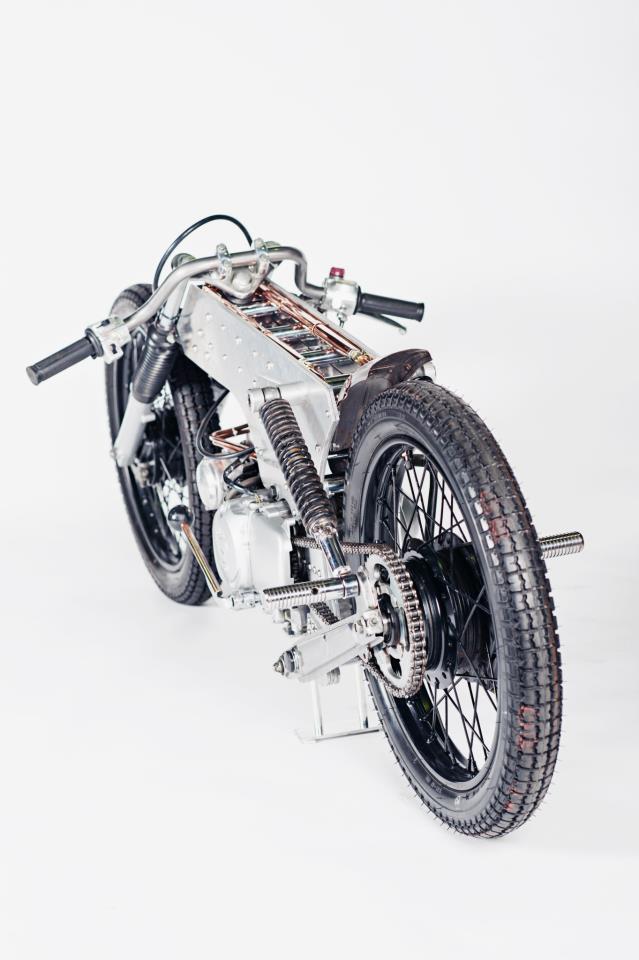 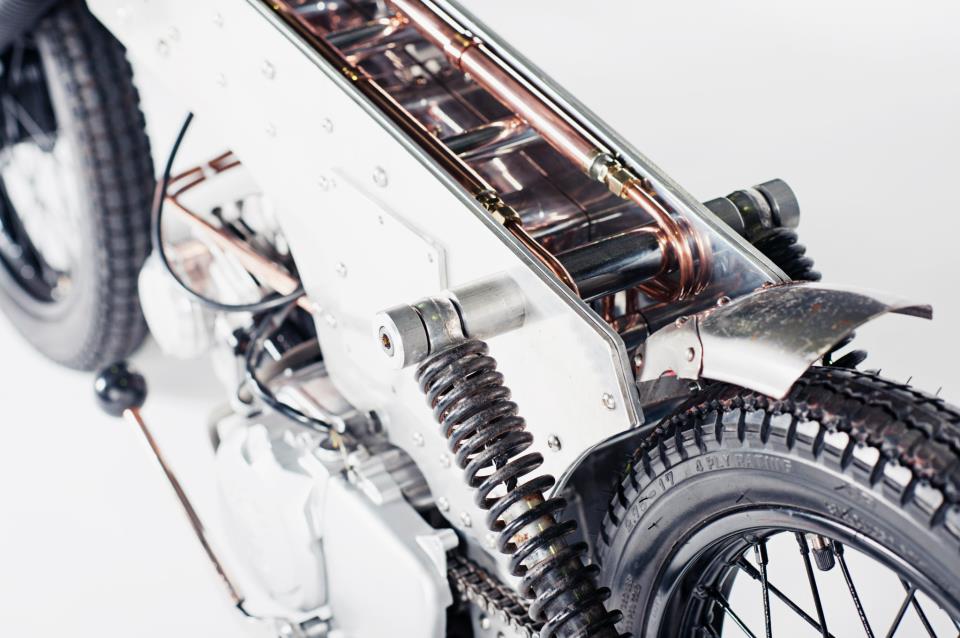 Have you been surprised by how much attention this bike has been getting?
When I finished in the early hours of the morning I surprised myself. I found myself stepping back at one stage and laughing like a mad man at what I had created. I never imagined all the attention the bike has attracted and I think having it on the internet has exposed the bike significantly.

“Shinya [Kimura] was one of the first builders that captured my eye. I really enjoy the craftsmanship you can see in Shinya bikes. I like the way he forms pieces. It is very evident that he spends a lot of time creating very industrial pieces that manage to speak emotions.”

The bike took you just 4 weeks to complete. How many hours did you put into it?
The physical build of the bike was completed in 4 weeks working most nights after work until 1-2am. Prior to the physical build I had sketched drawings what needed to be done and had a list that I worked through methodically. Yes it did take 4 weeks to build but around a year to decide how it was going to “work”.

What did you learn from this build that you’ll apply to your next build?
I didn’t realise how painful and uncomfortable a bike could be. The next bike will defiantly be something that can be ridden without fear of losing your pants.

You’re say your bike was inspired by Shinya Kimura’s aesthetic…
Shinya was one of the first builders that captured my eye. I really enjoy the craftsmanship you can see in Shinya bikes. I like the way he forms pieces. It is very evident that he spends a lot of time creating very industrial pieces that manage to speak emotions. It’s obvious that there is passion in the pieces. When I was making my frame by hand I was thinking about Shinya and how he makes his bikes. Hopefully as my skills progress I can attempt more elaborate pieces and eventually evolve into my own style and inspire someone else. 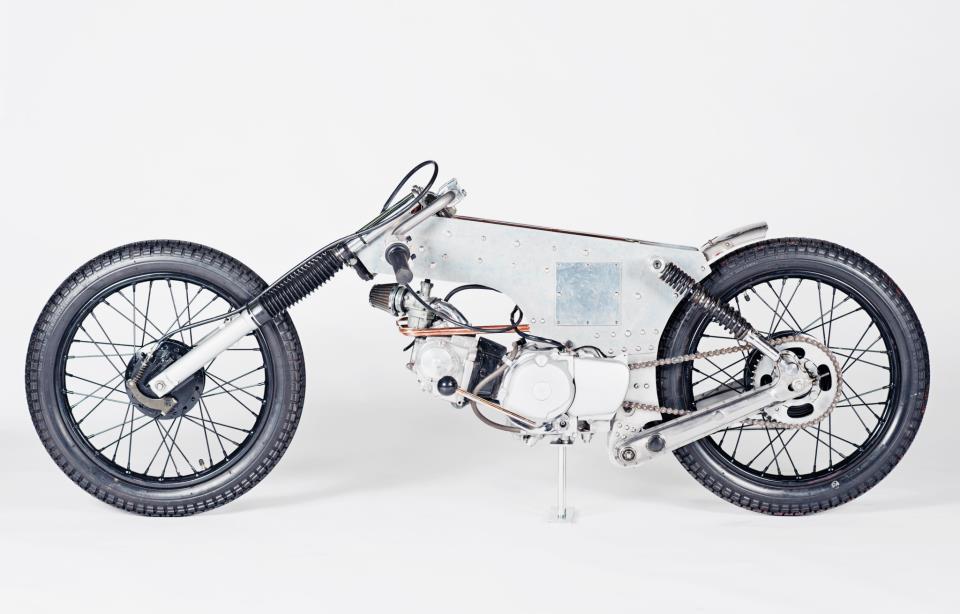 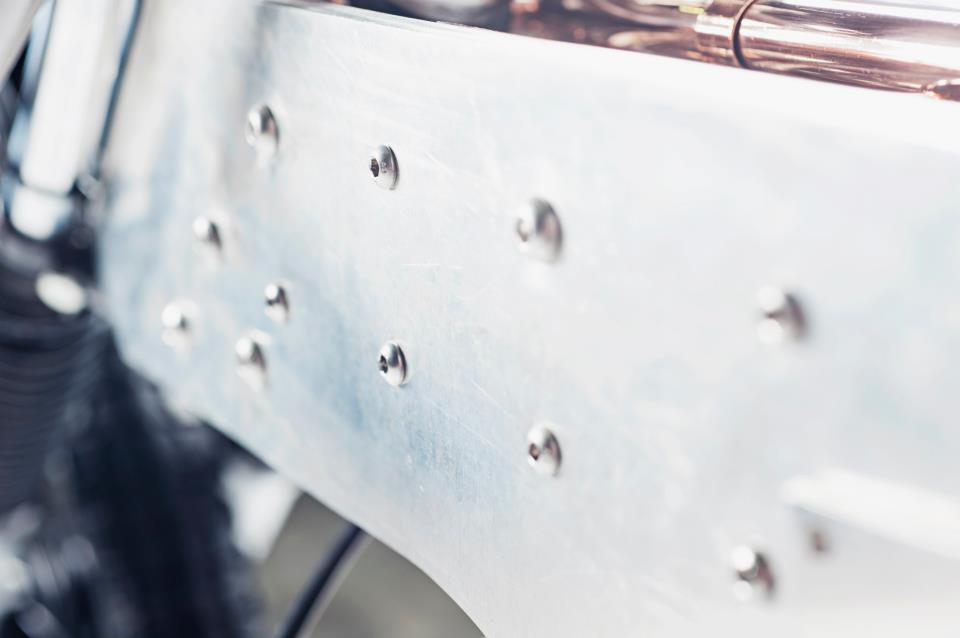 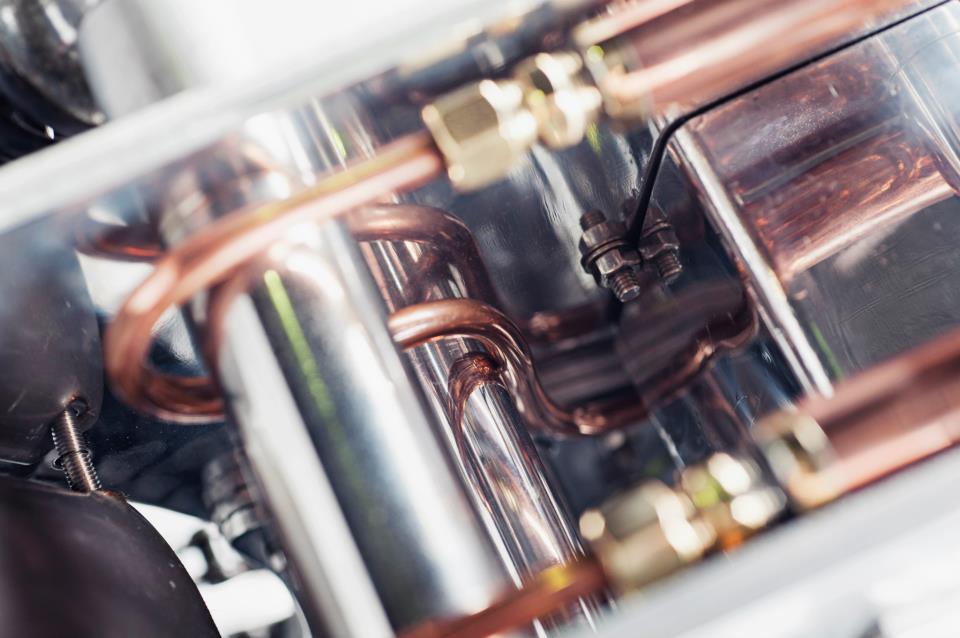 Detail on this bike that you spent the most time refining?
The shape of the frame took the longest. Setting the rake, position of the engine and rear end. I went through about 6 different templates. I ran out of cardboard and had to eat more cereal so I could use the boxes eventually I ended up raiding the neighbour’s bins to get more cardboard.

I spent at least a week on the frame templates each night finalising a concept only to come home from work and look at it with fresh eyes to realise it still wasn’t right. Time got the better of me in the end and I settled on my favourite of the templates. 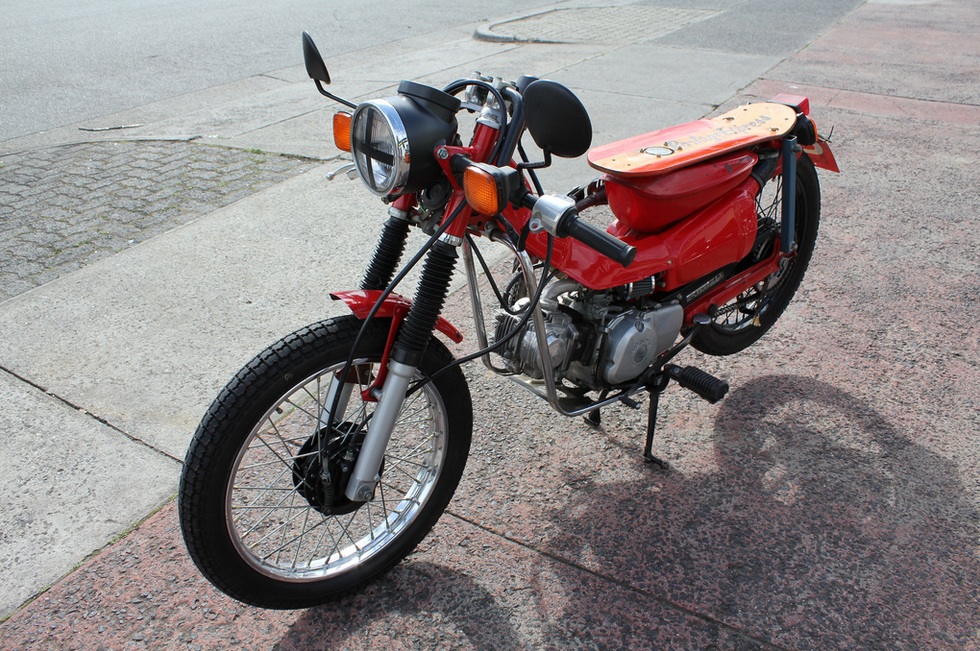 What’s been the most satisfying thing about this build?
The most satisfying part of the build is achieving the idea that lingered for so long in my head. It’s great to sketch dream and bounce ideas around in conversations but to have the push to attempt to make your ideas a reality makes you realise that if you have the passion and commitment you can make anything possible.

Best comment you’ve received so far about your bike?
Not necessarily the best comment but best reactions I often get is people laughing in disbelief, stepping back and just smiling shaking their head. It gives me a sense of joy that I am challenging people’s minds.

This bike is for sale…because you want to “…move onto new projects.” Have you got an idea of what your next bike is going to be all about?
I have an xs650 Yamaha that changes direction weekly from a functional tracker to a crazy Japanese inspired brat-style to a wild 60-70’s flaked Triumph style. I am a big fan of the Todd Asin’s blue Triumph and the Factory Metal Works Black Widow style and this will most likely be the style I am heading in. The aim is to be a very legal clean functional bike. It’s about time to see what it’s like to enjoy a bike on the road instead of building them.

Once I have built a functional bike I will attempt again to push the boundaries. Using what I have learnt and skills I have gained from my second build I plan to head in the direction of a mix of bob potts sculpture, Shinya Kimura and Chicara Nagata styles. 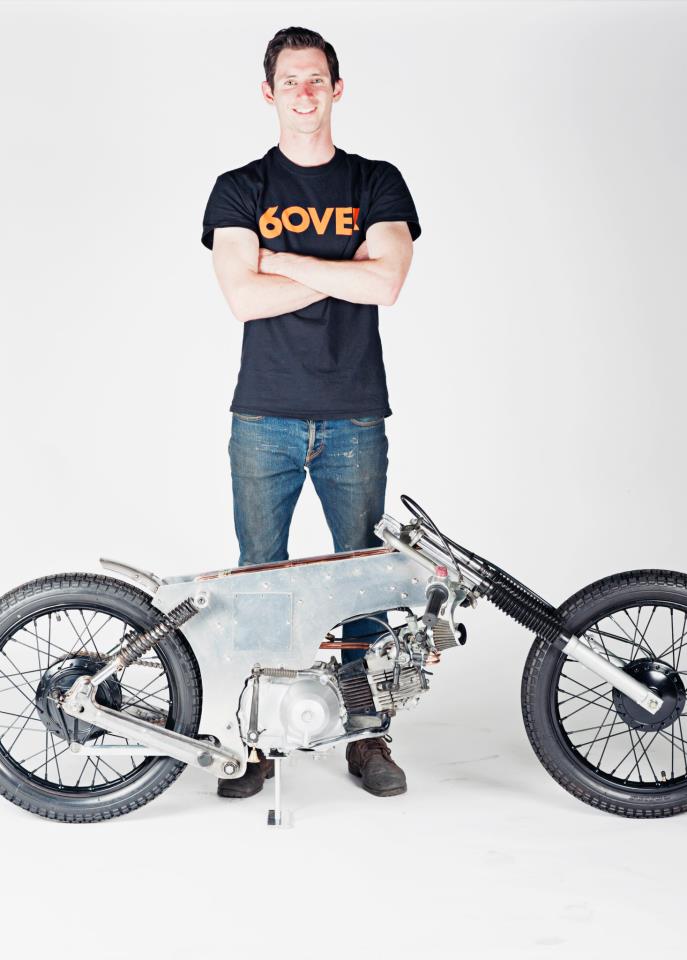