In his paintings, Barcelona based artist Markus Haub combines photography, traditional painting, and digital to create a collage on canvas. 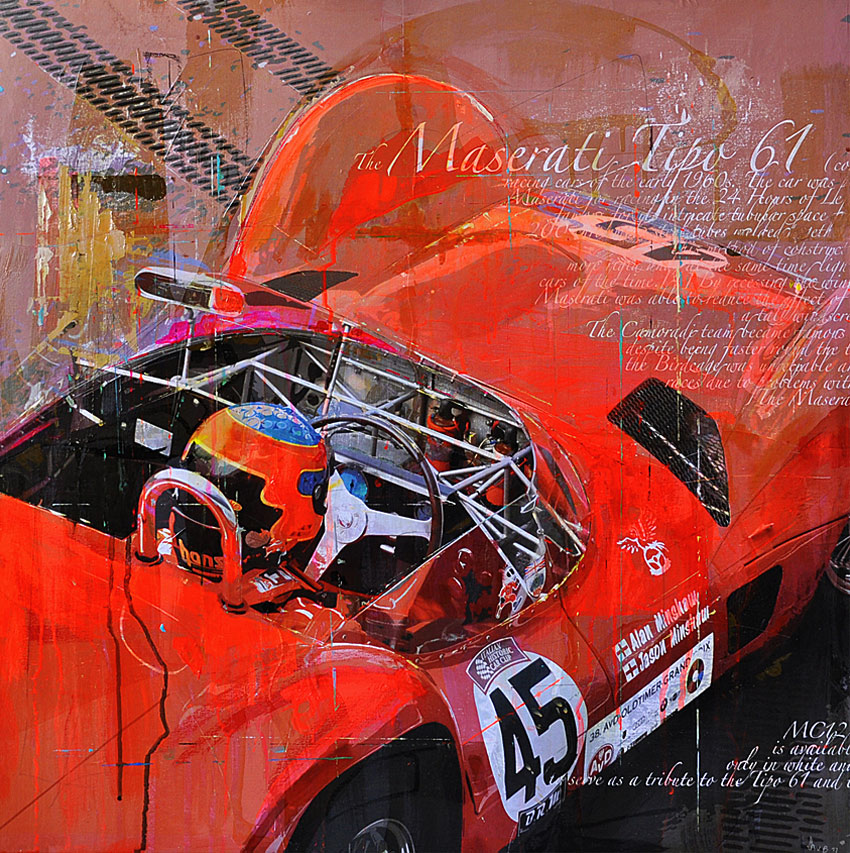 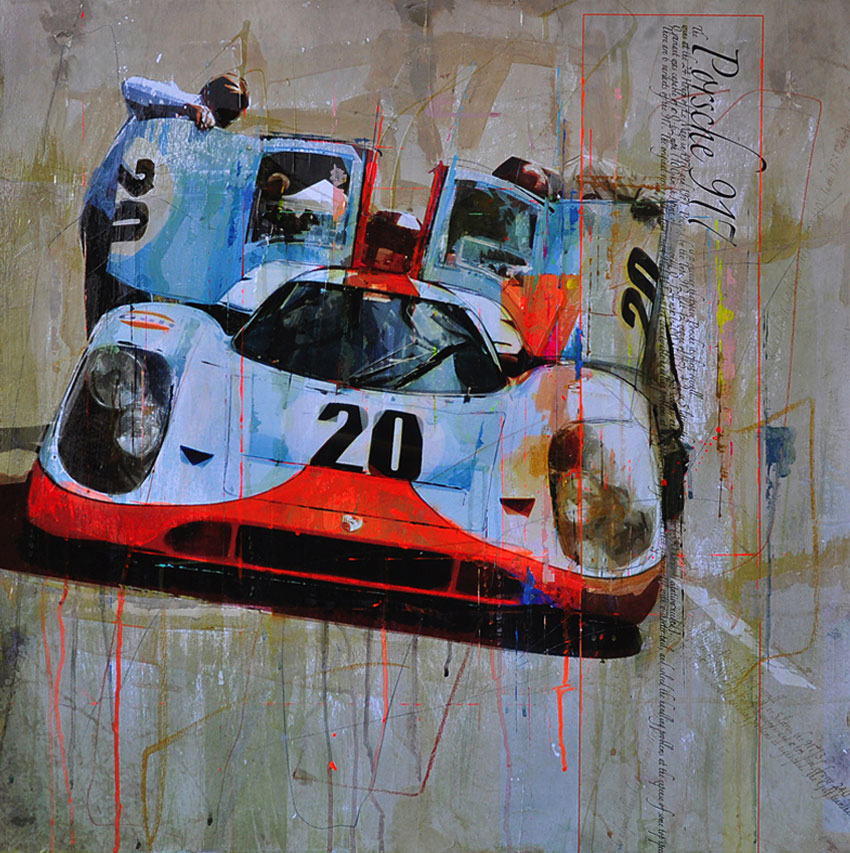 “It always starts with a photo. Then on the computer I continue to work digitally on it. I cut and crop it to get the composition, apply effects, ad or change color, and text. Then I print it on paper and make a collage on the canvas. Now the manual process starts with paint, pencils or varnish. It’s a game of creation and destruction and creation again.”
– markus haub

Read the entire interview with Markus Haub after the jump below…

Can you tell us about yourself and where you live and work?
I am German and came to Spain after my studies at a design school in Pforzheim/Germany. My first job was as designer for Volkswagen (Design Center Europe) in Sitges, near Barcelona. In the year 2000 I got an offer from Renault, who just opened a small Designstudio in the center of Barcelona. I also had the opportunity to work in Korea and for two years in Paris. Now I still live in Barcelona.

Do you remember the moment when you decided, this is it, I want to do this for the rest of my life?
I always lived in certain stages in my life and never planed my whole life in advance. I remember that one of the happiest days was when I was accepted to study car design at the design school of Pforzheim University. You have to pass a test and they only take very few students each semester, so I was one of the lucky ten. I finally could study and do what I always wanted to do. To draw cars! At the time I had no other ambitions and I thought that I would maybe do that my whole life. I don’t remember.

Today I don’t know if what I do is what I will do for the rest of my life. After many years as car designer I felt that I have more interests and want to do different things as well. I started painting (or better creating artwork in my special technique). After more then 10 years I needed more in dependency and I left my job at Renault to go freelance and also work as an artist. I’m also teaching since 10 years at a design school in Barcelona and in 2007 I created a photo-blog with a friend . This is actually what I love the most! It’s like a visual online diary. Everything I do always turns around cars or art or design. Now finally I can combine everything in the way I want to. Also thanks to the development of the internet many possibilities, ideas and contacts came up. That was not possible, when I started studying. So we will see what the future will bring… 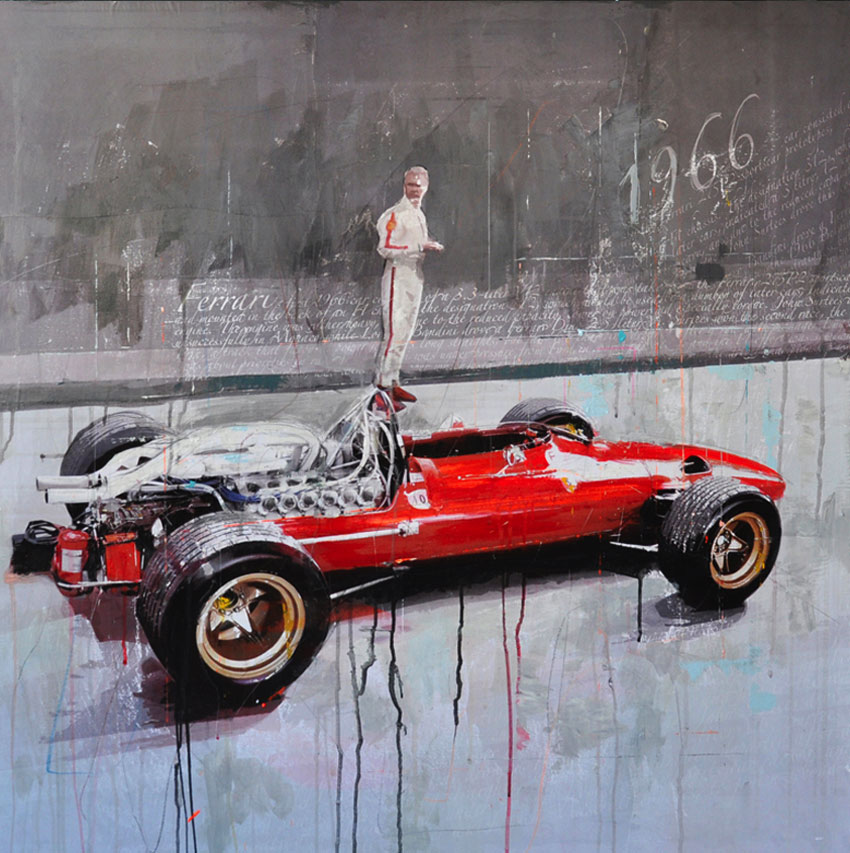 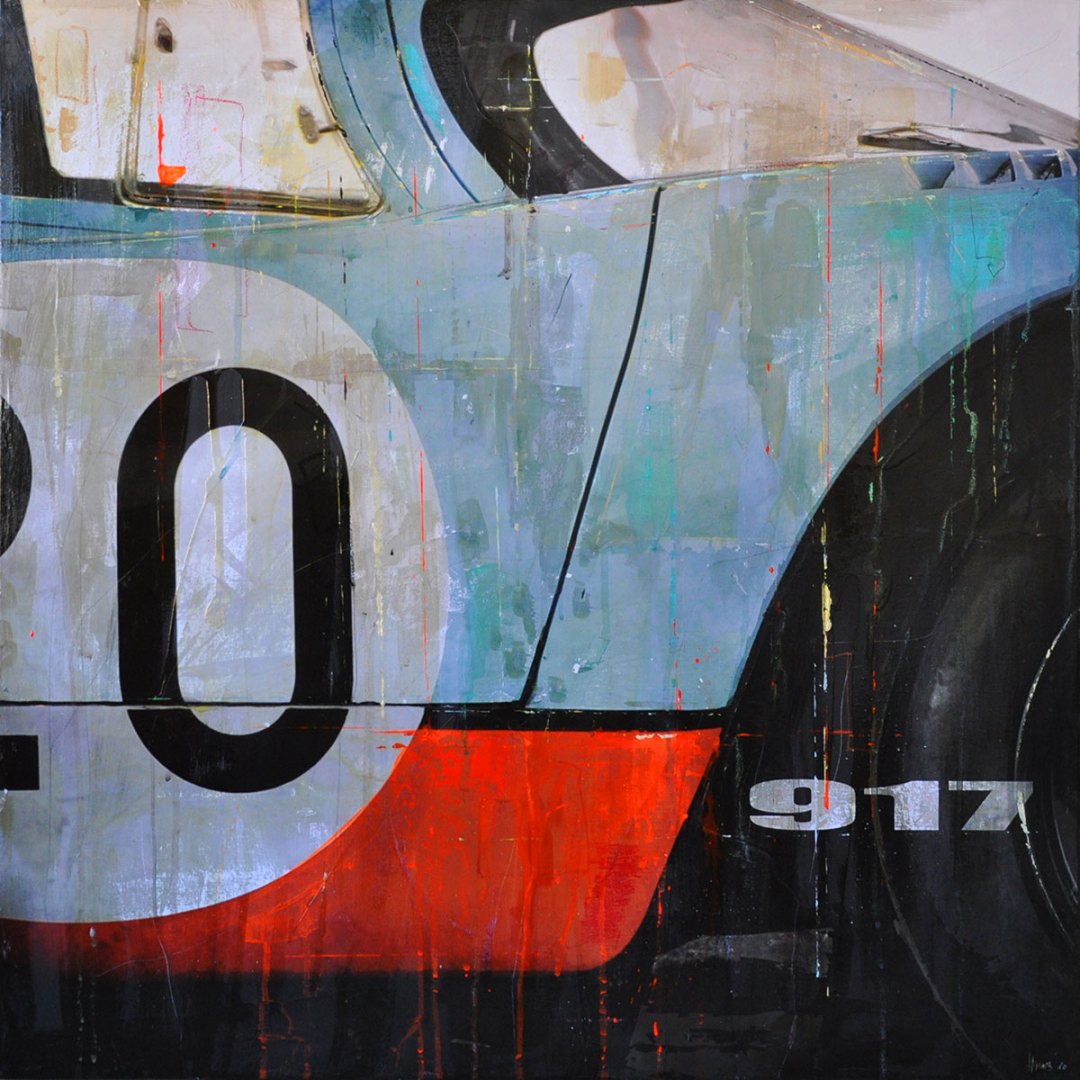 Where does your interest in cars and car racing come from?
When I was ten or twelve years old I started getting very interested in cars. I was reading all magazine I could get. I was specially interested in sports cars and started loving Ferraris. I still remember well when the Testarossa or the GTO came out in 1984. What a car! I always liked drawing as well. One day my dad came and asked me to draw a car and do a gift certificate for my older brother, who got his driving license payed as a present for his 18th birthday. I drew a Porsche 928. That was my first car drawing and I couldn’t stop since then.
The passion for racing car came much later. Actually the passion developed a lot during the last years. The more I go to events, the more I get addicted to it. It’s like a drug.

Your technique combines photography, digital, and manual painting…
It always starts with a photo. Then on the computer I continue to work digitally on it. I cut and crop it to get the composition, apply effects, ad or change color, and text. Then I print it on paper and make a collage on the canvas. Now the manual process starts with paint, pencils or varnish. It’s a game of creation and destruction and creation again. In the manual part lots of little creative accidents are happening and it’s always a surprise how the painting looks in the end. It’s always unique. 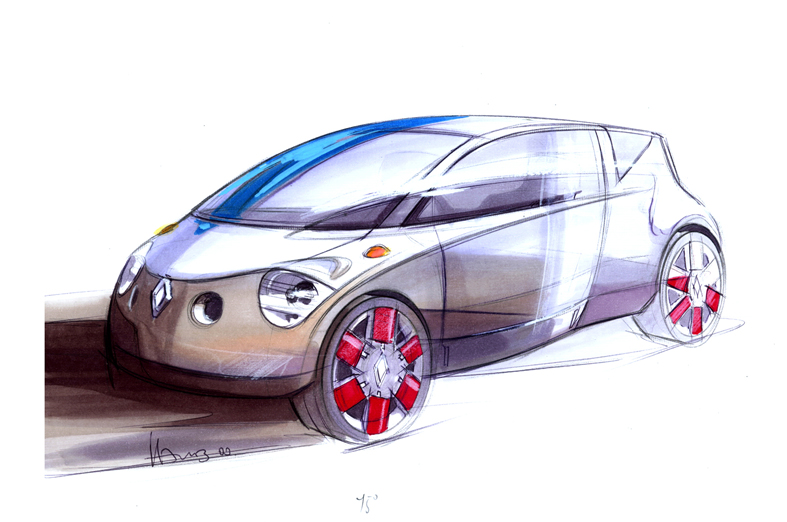 You were a car designer at Renault’s Advanced Design Studio in Barcelona. What was that experience like?
I left Renault Design Barcelona in 2007. My last project there was a new concept for a small electric car, which today we see as the TWIZY on the road. It was born in Barcelona. The studio was closed in 2010, because the strategy of the company and the markets have changed. Renault is more international now and opened studios in Brazil, India, Rumania or Russia. 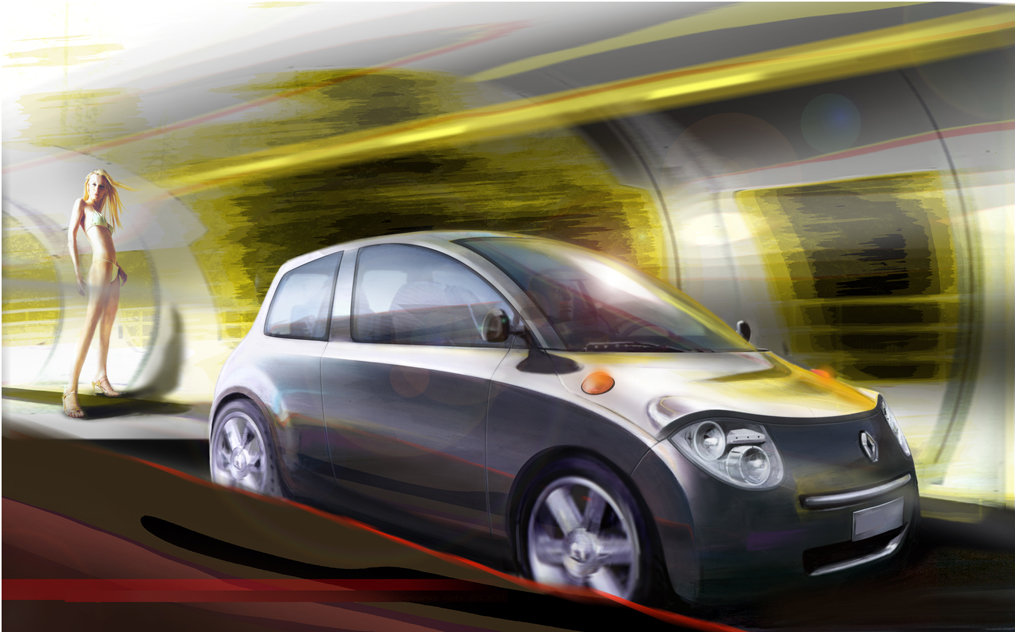 We were a team of about 15 people, 4 Designers, some engineers, modelers, secretary, director, sometimes intern-students. I always loved to work in a small team. It’s like a family and you never waste much time because its more direct and quick. I also enjoyed a lot of freedom. We basically could come and leave whenever we wanted (within the limits of course). But everybody knew that the work needed to be done. But I hate to work in the mornings, so I always came a bit late, but was staying longer in the evenings. When everybody was leaving, finally I could turn the music louder and work more efficient. To be creative you need to be in the right mood.

We mainly worked on the early stages of production cars, like Twingo, Clio or Laguna. As a designer you get usually a project briefing, sometimes a technical package, where the dimensions, windscreen position, wheel size, roof section or trunk space is given. Then you start very freely to scribble to get a feeling for the product and develop design-themes. After some weeks and some presentations you get closer to reality and start building a model (physical with clay or nowadays more digital). So as a team we develop several proposals, which in presentations get cut down to the final one. But we often stood in competition to the proposals of the main design center in Guyancourt near Paris, where about 350 people work in the design department (maybe these days even more). 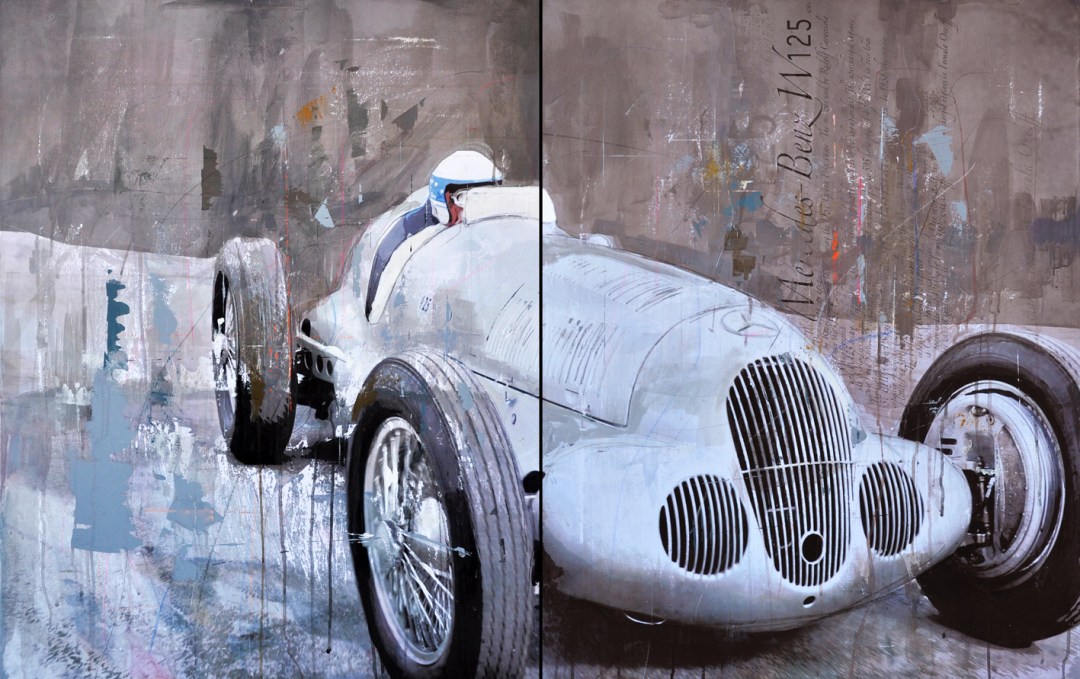 How has being a car designer influenced your paintings and vice-versa?
I think my paintings are not influenced so much by car designers. I feel more influenced by other artworks, illustrations or mainly photography. I started my paintings on a series of photos from the movie “The 5th Element” or “The Million Dollar Hotel” with Milla Jovovich. She inspired me most in the beginning. No car, no design, just pure beauty. 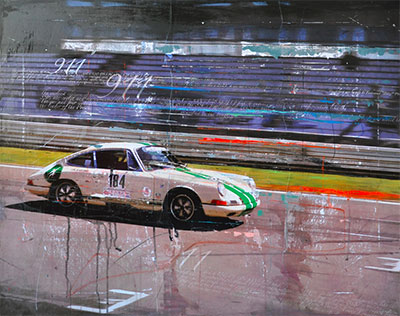 Your favorite racing car of all time?
There are so many and my favorites are always changing. It’s like with music. Definitely one of the all time favorites is the Porsche 917 in Gulf Racing color. But there are some cars I really discovered by seeing them “in real”, like the Alpine Renault A220 from 1969 with its big lamps or the sleek Aston Martin DP214. But I also like icons like the Ferrari 250 GTO or 250 LM, Ford GT40, Mercedes 300SL or the Porsche 550, specially in the Carrera Panamericana Coupe-version from 1953. One of my favorite Formula 1 cars is the Ferrari 641 from 1990 with its pure and simple shape.

Your favorite race car driver and why?
I always was more for a team (Ferrari) then for a driver. I like Gerhard Berger, Alain Prost or Walter Röhrl as drivers. I also think that Ayrton Senna was one of the best pilots ever and one of the most charismatic. After his accident I didn’t watch a race for many years. Still today I don’t enjoy it as much as I did before. Unfortunately many drivers are connected to tragedy, which made them immortal. Gilles Villeneuve or Jochen Rind, great talents who died far too early. 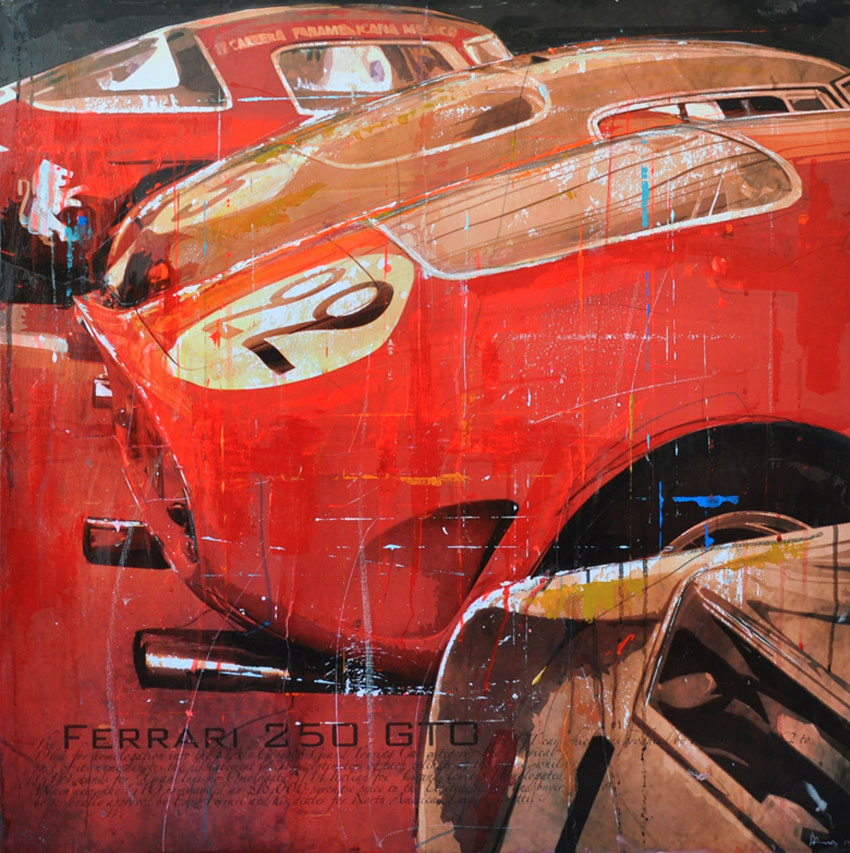 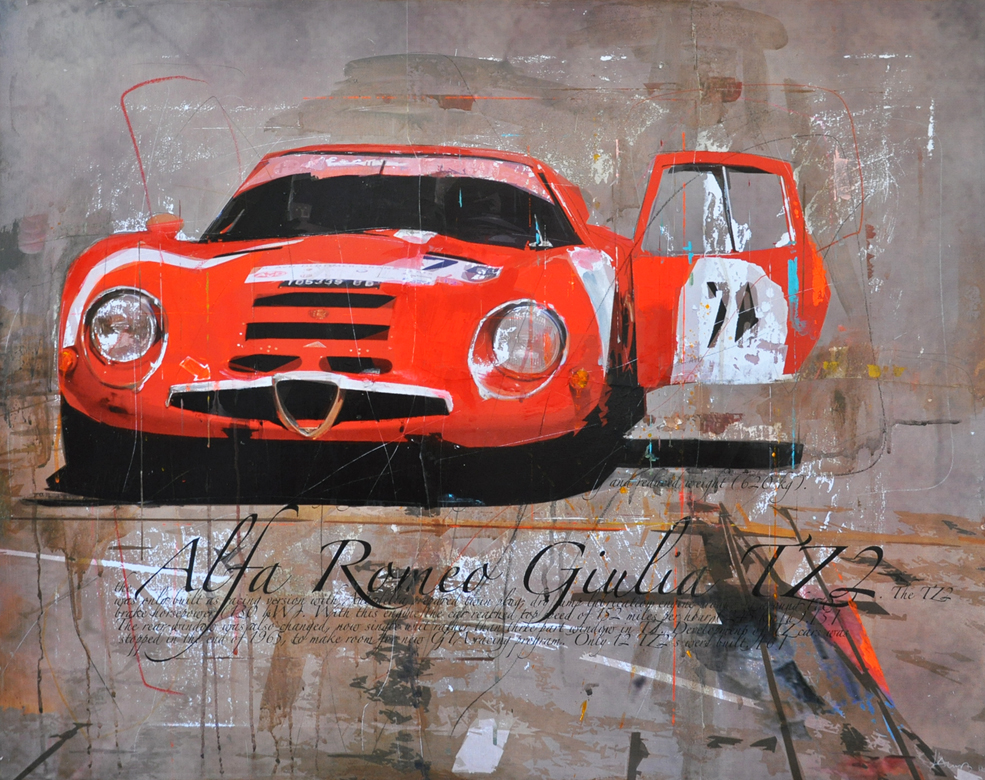 What artists influenced you the most?
I like graffiti and street art in general. I can’t name any in particular. It’s more bits and pieces I see and get inspired from. I remember when I saw the portraits of Françoise Nielly for the first time in a gallery in Paris in 2005 or so. She is using strong fluorescent paint, what a color flash!!

What race track or event do you like to frequent?
Because I live in Barcelona I go a lot to the circuit de Catalunya. It’s also good for taking photos, because you get very close to the cars and have lots of different spots. In summer I spend usually a lot of time in Germany, so I go to Hockenheim or Nürburgring regularly. This year I went for the first time to Goodwood for the Festival Of Speed. Wow, that was something. Four days of finest racecars in action. Unbelievable… 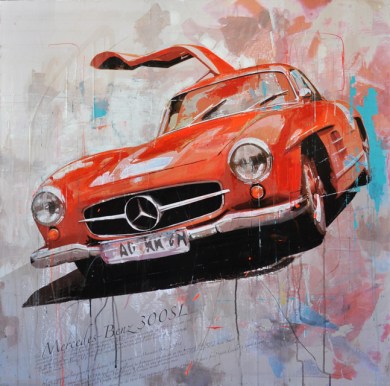 Best place in your neighborhood to grab a bite and a drink?
There is a small bar/restaurant with a terrace just around the corner where I live. It’s called “la Candela”, nothing special, but great for a beer or two and start the night. A newer place nearby is a tiny bar inside a narrow private passageway, where you can get small tapas as well which is called “Bar Pasajes”.

On a good day, how would your friends describe you?
Maybe being a bit too lively. I never want to go home at night. Always one more drink somewhere, which I regret then the next day. Maybe you have to ask my friends for that question.

What are you working on now and what are your upcoming plans?
After a long summer in Germany where I went to lot of classic car events to take photos, I had a very productive period in the last couple of months.

I just finished a series of big paintings of a white Porsche 911 in different variations. I also just had an exhibition in Paris and still have one with the “Racing Legends” in Barcelona. I also work on a freelance design project at the moment. For now I have no big events planed for next year. But things sometimes come up quickly. 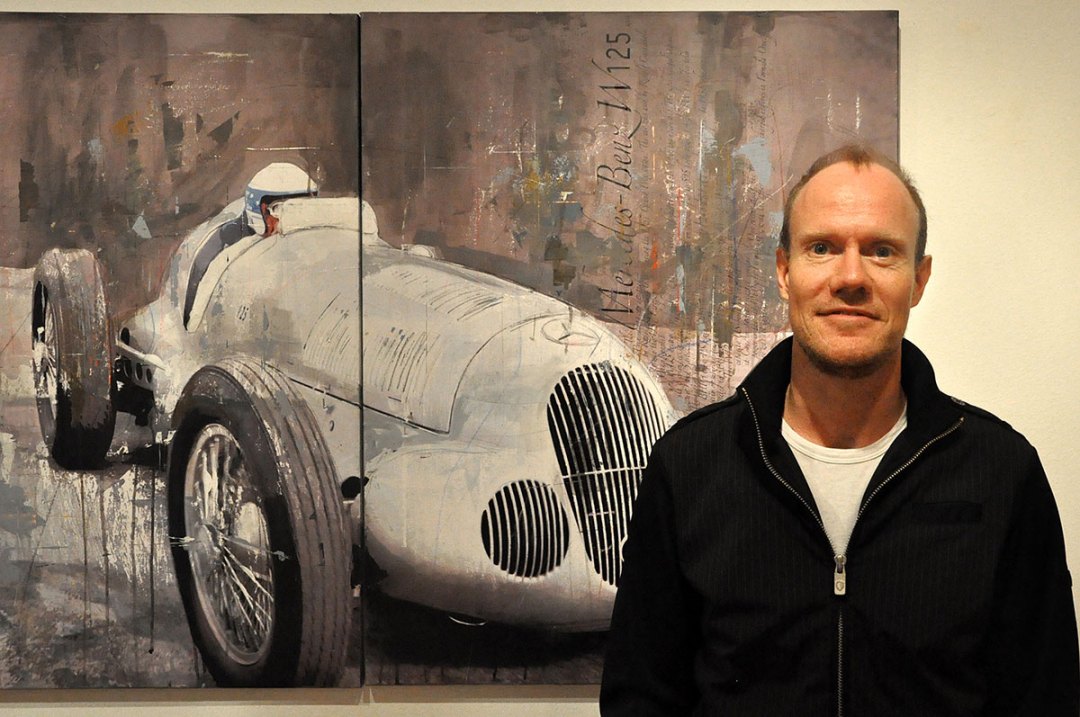