Ian Sutton on his time with Koichi Yamaguchi, the reason he crafts his frames from steel, and why he’s in no rush when it comes to building his frames. 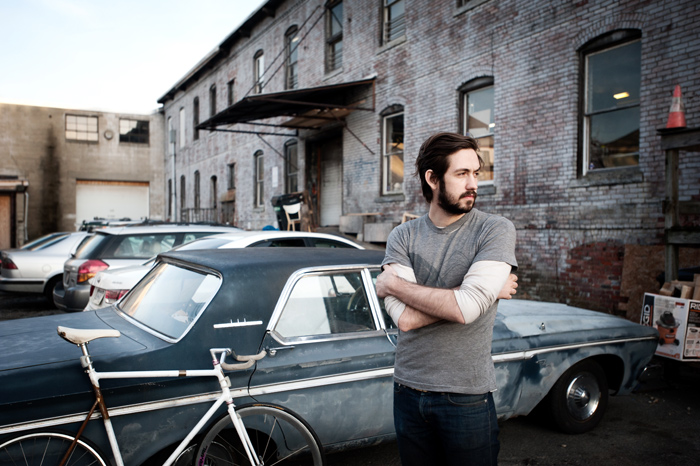 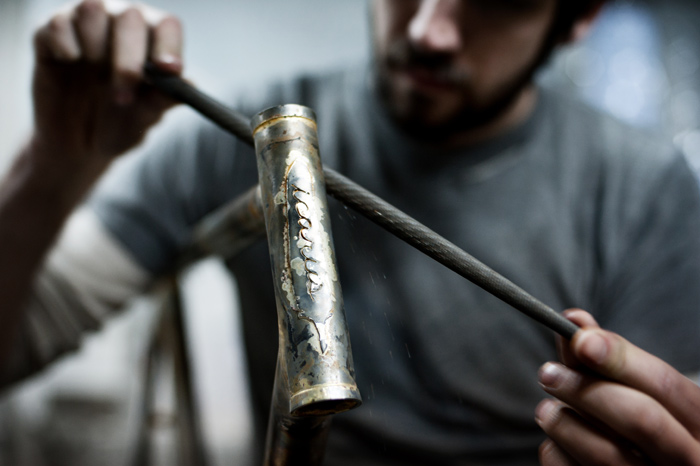 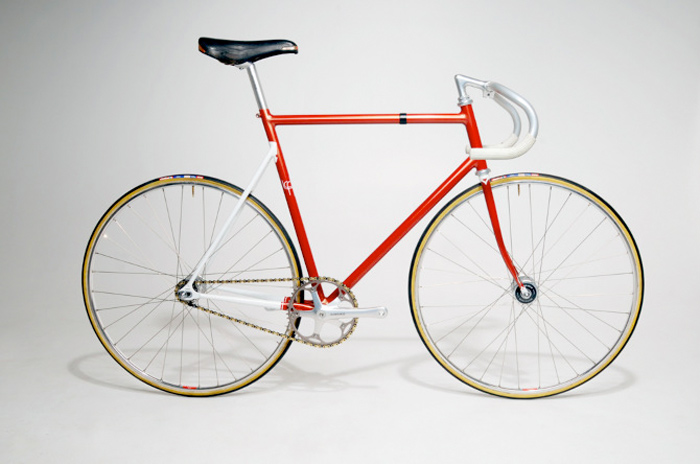 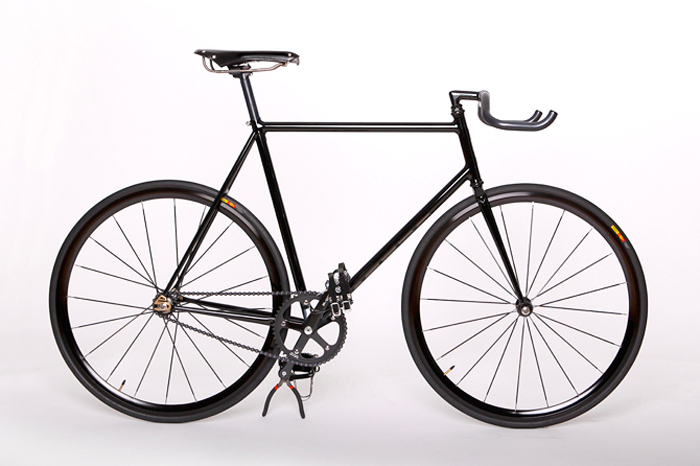 About Ian:
My name is Ian Sutton and Icarus frames is the culmination of my training and experience in the frame building world. I began building when I left college to attend the Yamaguchi Frame Building School in Rifle, Colorado. The training was 100% one-on-one with one of the greats in frame building, working with Koichi Yamaguchi learning the basics from start to finish, along with the art and nuance too. Later that year I visited builders I admired and wanted to work for to talk about the industry and decide if I should work on my own or gain more experience with a high-end custom builder. I was offered a job working for the esteemed Seven Cycles in Watertown, MA.

I left everything behind to take that jump into the frame building world and worked first as a finisher and then later advanced to a machinist. I finished and machined hundreds of frames adhering to Sevens’ rigorous quality standards. After hours I started building my own concept frames and I called it Icarus, setting up a studio in the Geekhouse shop in Allston. There I was able to further experiment with design and transfer my ideas to real world use. 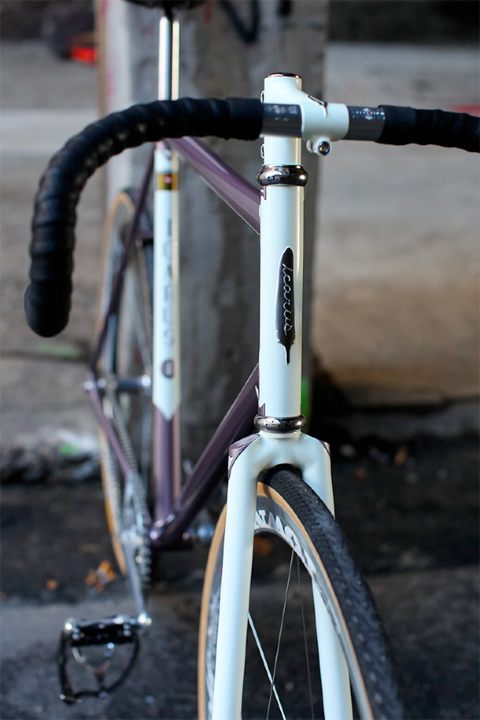 Your first bike?
I know it wasn’t my first but the one I can remember specifically was a Magna mountain bike with the grip shift when I was 8 years old.

How did you get interested in building bikes?
I became interested while in school for engineering and was riding a lot. I decided that I didn’t want to just design things, I wanted to fabricate them too. I have always had a hard time finding the cool vintage frames in my size so it made sense to learn to make them myself.

For those of us not familiar with Koichi Yamaguchi, can you tell us about him and what it was like to learn from him?
Koichi Yamaguchi is THE master frame builder. He started out building for 3Rensho in Japan and works with a low-heat, low-stress building style that was the opposite of what the Italians were doing. He was the lead designer and builder for the US Olympic and national teams back when they still rode steel. I was intimidated to work with him one on one (I was the only student at the time) but he is a humble and patient teacher. He taught me the skills and tricks to build strong, straight frames with the simplest tools and I still use those techniques today. 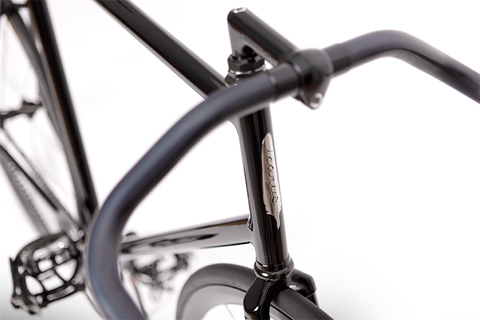 Roman's Stealth Track :: Painted by Brian at Circle A.

After attending Yamaguichi’s school, you then went to work at Seven Cycles in Massachusetts. What was that experience like, and what did you learn while you there?
I was really fortunate to land that job at Seven Cycles. I started out as a finisher which meant doing all the final machining, Titanium/Carbon bonding, frame alignment, polishing and decals. Its a steep learning curve and for the first few months, the inspector would send every frame back to me with a list of minuscule defects for me to fix. Everything had to be flawless before it could be shipped out and that taught me to scrutinize my work at a whole new level. I was also part of the A6 Carbon program there but after the first year, I moved to the machining department and became proficient in operating lathes, milling machines, hydraulic benders and frame jigs. I think that process increased my ability to multi-task and work with tooling faster.

After that you started Icarus…what was that like?
I actually starting building Icarus frames not too long after I started working at Seven. At first I was sharing shop space with Marty Walsh of Geekhouse bike and Bryan Hollingsworth of Royal H. I would go there nights and weekends to slowly build frames. Its was great to have a couple other builders to toil with and bounce ideas off of. Sharing tooling and rent was key in taking time to develop a style without having to take out a loan and be worried about overhead. 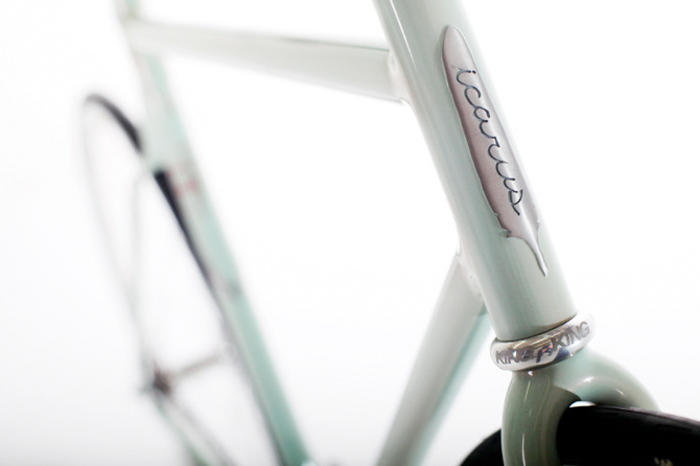 What common design thread do all of your bikes have?
I guess the only common thing would be the feather headbadge. They weren’t always stainless, the early ones were copper but the rest of the frame is always changing. I use True Temper tubing as much as possible so I guess that counts too.

“The bicycling industry is obsessed with lighter, stiffer but its all progress for the sake of progress. Chances are, if you are buying your own frame then you aren’t competing at a level where the added stiffness of a BB30 or tapered headtube is even going to be noticeable or beneficial.”

Typically, how many hours would you say you put into one of your creations?
I work wacky hours and am often jumping back and forth between, emails, ordering shipping and fabrication so its tough to know for sure. I think maybe 40 hours of fabrication is about right. It’s too much time, I build slow but I can’t help it. I keep finding ways to make things more time-consuming like hand carving bi-laminate joints or bending tubes. I don’t really want to build faster though, Icarus frame owners will always be part of a small family.

Easiest/hardest thing about owning your own business?
Are there easy things about owning a business? I am always to work on time? Who knows, one has to be very self disciplined to get things done and keep everything running smoothly. That being said, I hate the business side of it, I like fabricating and being creative, if I could afford it, I would hire someone to deal with all the tax, ordering, paperwork crapola. I am trying to learn the business side because I know it’s what will make Icarus last and will allow me to one day live like an adult. 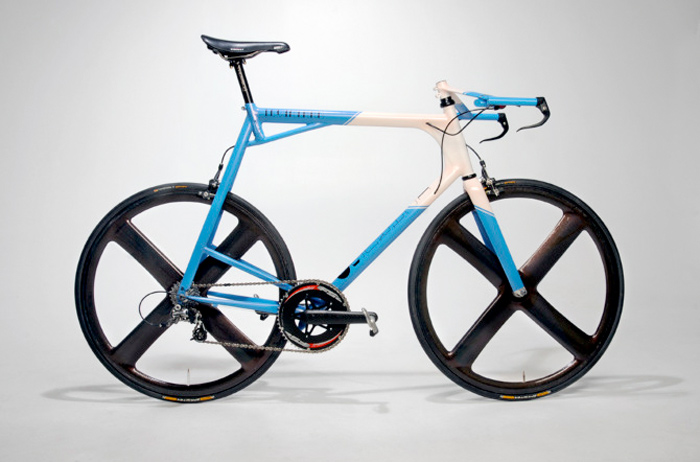 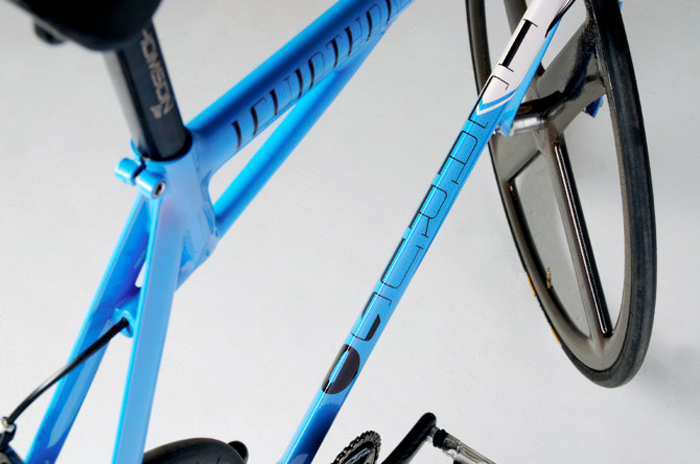 Why build with steel and what are its advantages?
Steel is the most customizable frame building material available. Since it has been around the longest, there is a multitude of tubes of different alloy, size, shape, and wall thickness to choose from. A truly custom frame doesn’t just mean its angles and lengths are variable, it means the tubes themselves are selected to give you the ride characteristics you want. The bicycling industry is obsessed with lighter, stiffer but its all progress for the sake of progress. Chances are, if you are buying your own frame then you aren’t competing at a level where the added stiffness of a BB30 or tapered headtube is even going to be noticeable or beneficial.

Best compliment you ever got about one of your bikes?
“It rides better than it looks.” 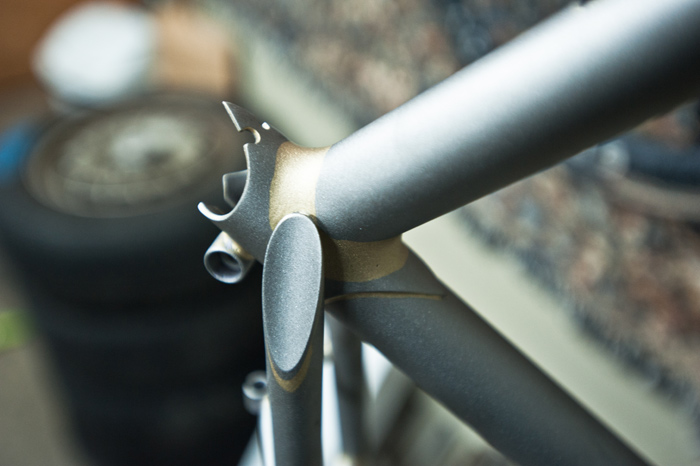 Detail on of your bikes that you spend the most time refining?
The fillets! I spend way too much time massaging each joint, sometimes I wonder if the extra time is noticeable to anyone other than me.

Phrase you use most around the shop?
I work alone now so it’s mostly just mumbling about Pandora choosing shitty songs while I am trying to braze.

If I had more time, I would…
Am I dying or something?

What do you like about Asheville and what’s the bike scene like there?
I am new here so I don’t know it too well. I know there is endless mountain biking trails, a good mellowdrome for track training and lots of cool winding roads for longer rides. I moved here because the New England winters are a bummer if you like bicycles and so that I could focus solely on Icarus, no more second job!

I haven’t gotten to take advantage of the road and MTB riding yet, I really need to build up something so I can explore the mountains here more. I have been enjoying doing laps down at the track, it was hard to find a place in Boston where you could just crank away without worrying about traffic, potholes and pedestrians.

What’s next for you?
Well I have been working on building a motorcycle by hand so maybe after that a submarine.

“Shinya [Kimura] is awesome, and meeting him and seeing his work in person was very exciting. He actually used to race Keirin in school when he was young so he had wanted to be a frame builder before getting into motorcycles and had a lot of questions for me about tubing and brazing”

Can you tell us more about this motorcycle you’re building?
It’s definitely different and will be very post apocalyptic rough looking. I am making everything by hand other than the Triumph ’63 frame, Triumph ’76 engine and the wheels. I am doing it with all small hand tools an the joints are all brass brazed like my bikes so the construction is very odd.

My biggest inspiration was seeing Shinya Kimura’s work a few years back and I even visited his shop in CA over the summer.

He’s a giant – we did an interview with him awhile back…
Shinya is awesome, and meeting him and seeing his work in person was very exciting. He actually used to race Keirin in school when he was young so he had wanted to be a frame builder before getting into motorcycles and had a lot of questions for me about tubing and brazing. 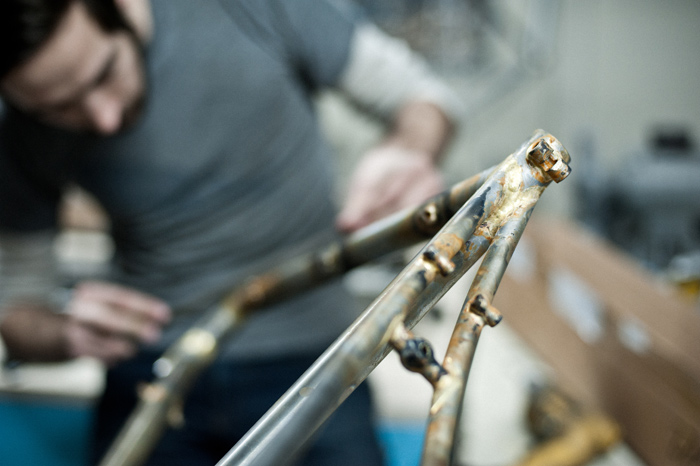 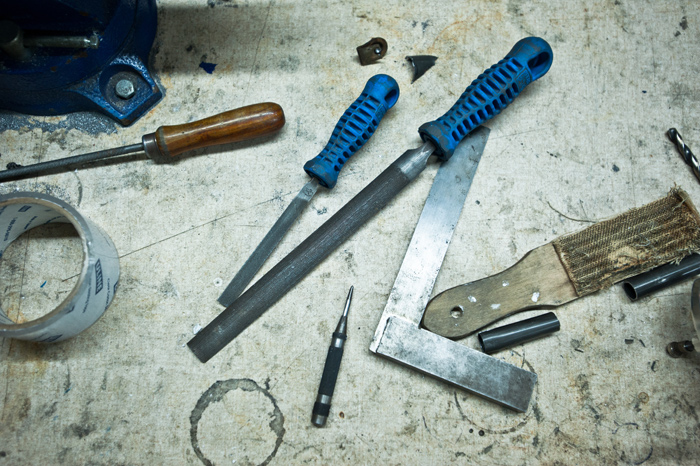 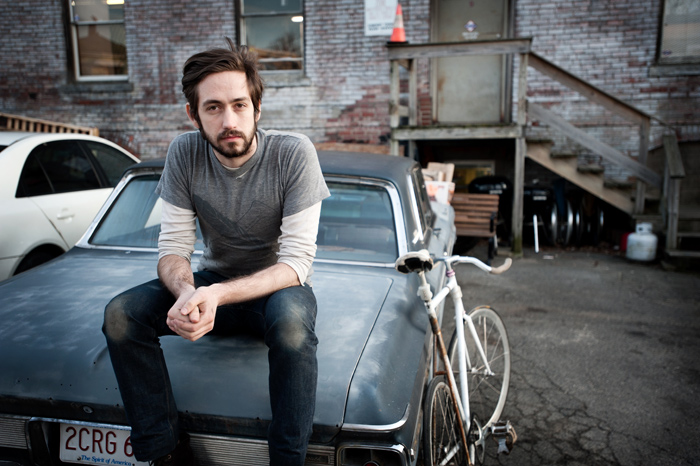