The Tarantulas :: Interview with Scott T.

Scott T. dispels my main misconception about this band of motorcycles enthusiasts/tinkerers from Oregon’s own Portland. (I was under the impression they were a notorious lumberjack/motorcycle gang). Don’t care, I want to be a honorary Tarantula. 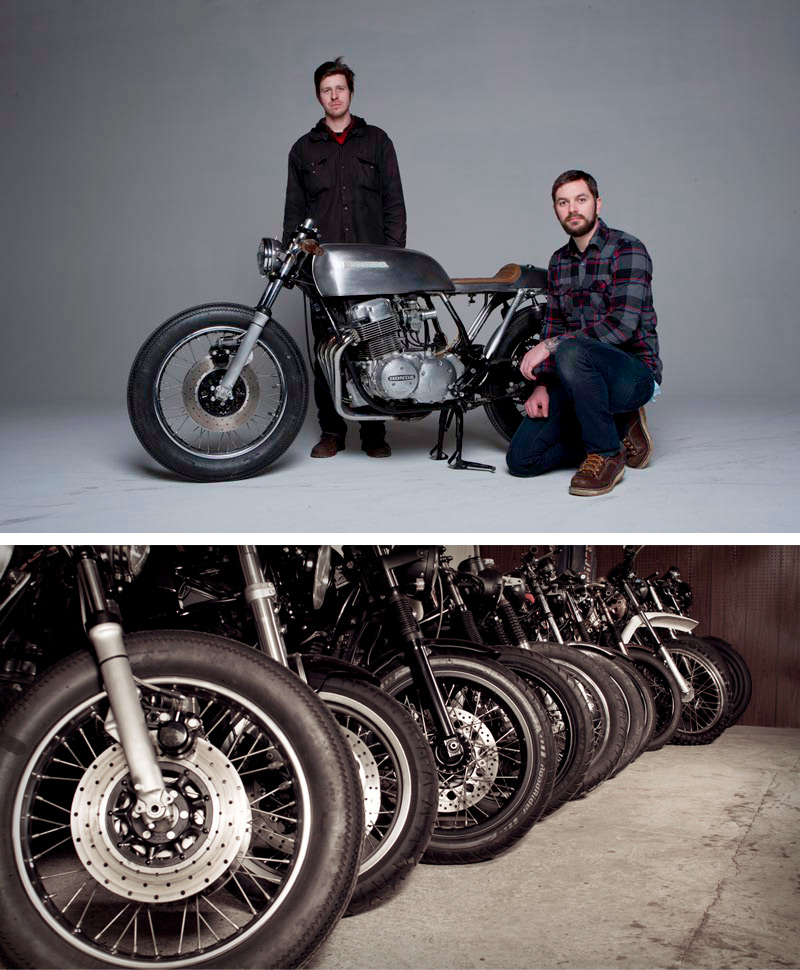 “As far as the Tarantulas go, the actual name started as an inside joke about a club of 1 (me) to annoy my girlfriend and it worked pretty well.”
– scott

Can you tell us a little about yourself and the Tarantulas?
I’m 32 years old and still acting like an idiot. Grew up in Idaho farming and now am at the complete opposite end of the spectrum working as a freelance designer in Portland. As far as the Tarantulas go, the actual name started as an inside joke about a club of 1 (me) to annoy my girlfriend and it worked pretty well. Then about 5 years ago I moved into the house I’m at now and it had a garage across the street from a now good friend of mine Asa Miller. We both noticed the motorcycles in each others garages and from there we teamed up and started working on bikes together. Along the way we learned some lessons the hard way and figured out some tricks to help with building a bike. I created the blog / site as a way of connecting to others. 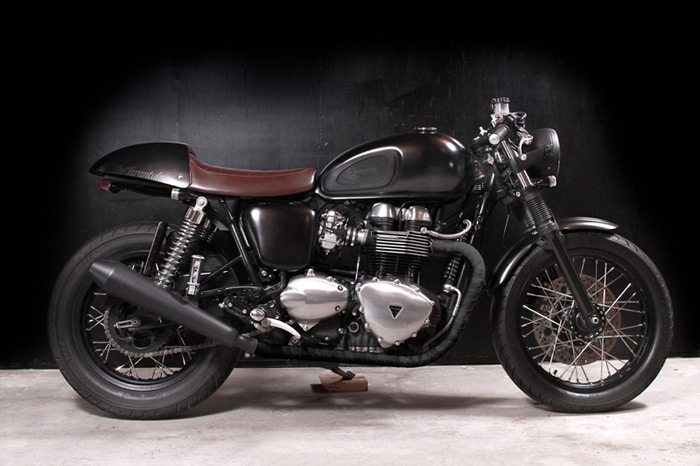 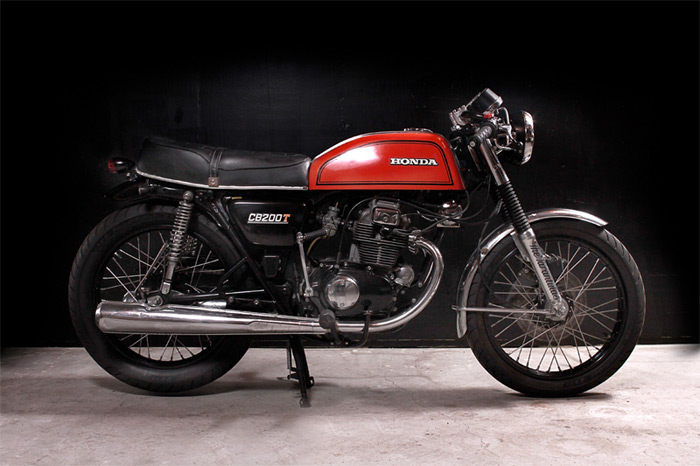 Who are the Tarantulas, what are you all about, and is becoming a Tarantula as hard as getting into the Mob?
Just some dudes who truly love motorcycles. Becoming a Tarantula is about as easy as joining up for a ride, beer or some shop time.

I have this theory, that every social group has a loveable Ringo. Who’s the Tarantulas Ringo Starr?
I would have to go with Tiny Nick. Nick isn’t so tiny, but nobody really wants to call him Big Nick. He’s still in the build phase with his ….. and probably will be for quite some time. It’s not all his fault though, he is a new dad and of course that takes priority over motorcycles. We have this habit of finding imagery of huge trikes or one off tractor style motorcycles and then send them to him as inspiration for his ongoing build. I’ve found in life that the kind of people that you want to surround yourself with should be good at taking shit and giving it right back. You need people that are confident enough to poke fun at themselves and others without any hangups. Tiny Nick can take shit with the best of them and that’s why I love the guy.

If the Tarantulas had a patron saint it would have to be…
That’s a good one. Is Steve McQueen considered a saint? I’m not a religious guy, so I’m not sure what’s all out there.

What’s the first motorcycle that burned into your memory?
As a young kid growing up in Idaho I spent a ton of time on dirt bikes. I think the day I saw one of my friends roll up on a 1985 CR80 is burned into my memory. I just remember looking at that CR on the blue seat and being nervous about the possibilities of that 2stroke bike compared to my older XR. I still want to get an 80’s CR now that I can. Sucks to be a kid with no income and parents that wanted you to learn the value of saving for something. 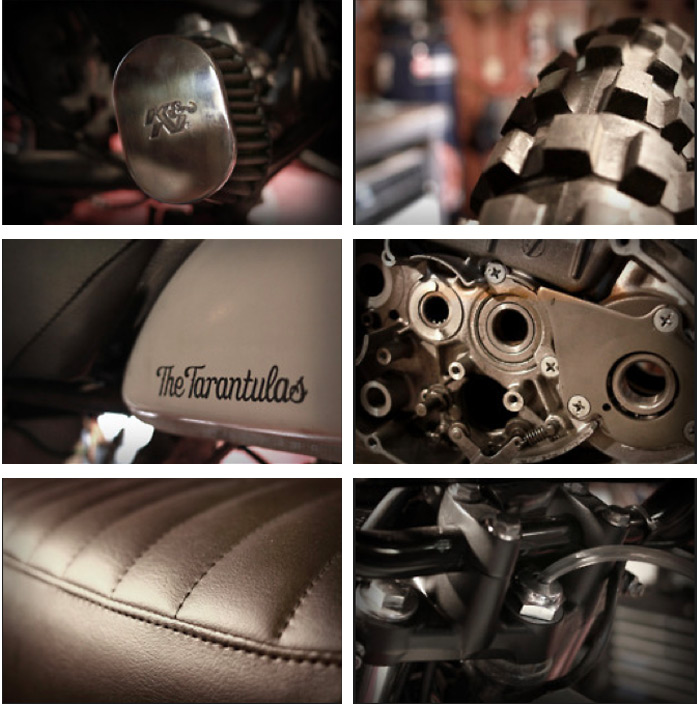 “Just some dudes who truly love motorcycles. Becoming a Tarantula is about as easy as joining up for a ride, beer or some shop time.”

Motorcycle era you look at for inspiration?
I don’t know if there is a particular era I could nail it down to. I lean towards the same aesthetics in motorcycles as I do with design. Clean, simple, timeless…nothing too tricky or flashy. I like when a motorcycle looks like the machine they are as opposed to a shiny trophy.

Custom motorcycle shops around the world that you like to keep an eye on?
I feel like I’m way out of the loop when it comes to what’s going on these days. I have a couple blogs I check once in a while and I would have to credit Wrenchmonkees for always being an inspiration. Shinya Kimura blows my mind as well. 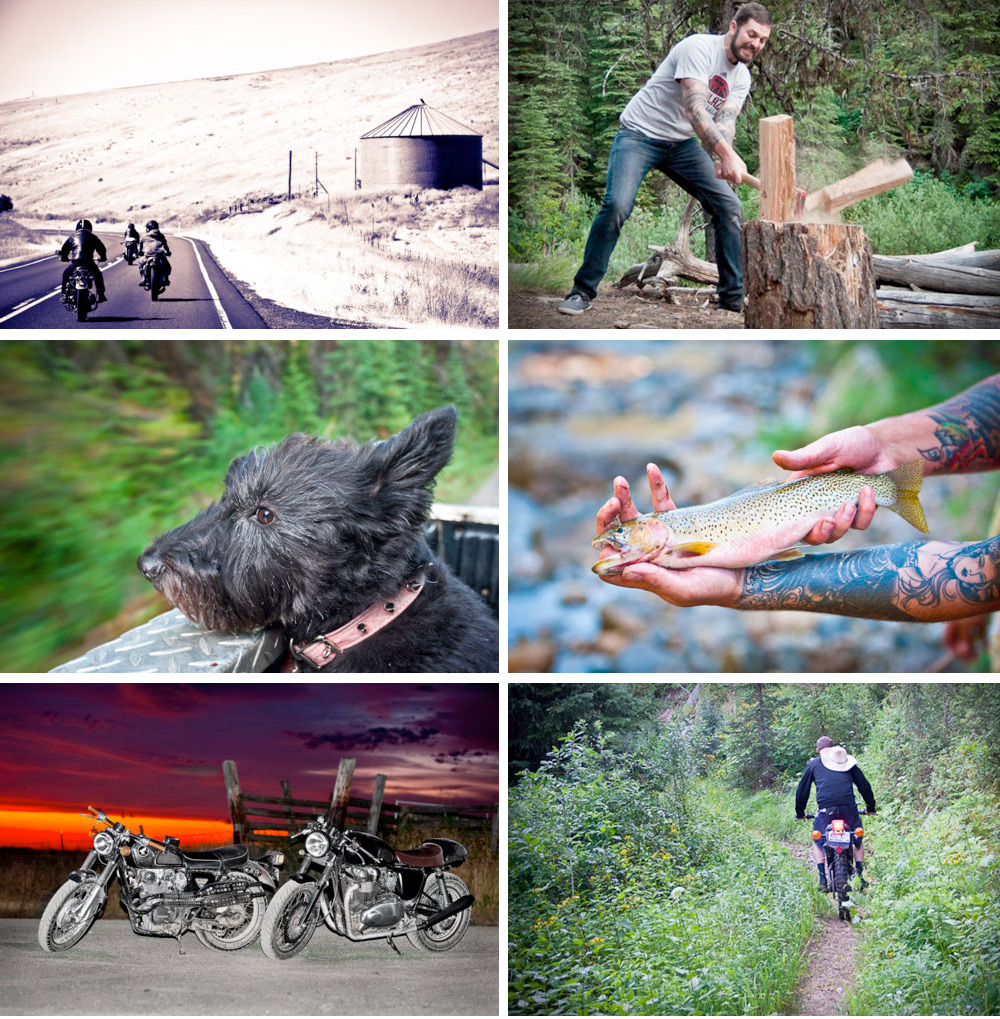 Most memorable ride you ever had in the Northwest?
We did a ride to my favorite place ever to camp and fish last summer and will do it again this summer. It’s up in the middle of the Bitterroot mountain range between Idaho and Montana. A few of us rode all the way over there from Portland. A lot of freeways, but the route up Highway 12 in Idaho was worth the lay down bore of the interstate. 16 miles on sand roads to get to the actual camp spot was a bit tricky on cafe bikes that’s for sure.

Biggest misconception about Portland?
None, they are all true. People take everything too far here. Everyone has a “costume” that they use to define them. 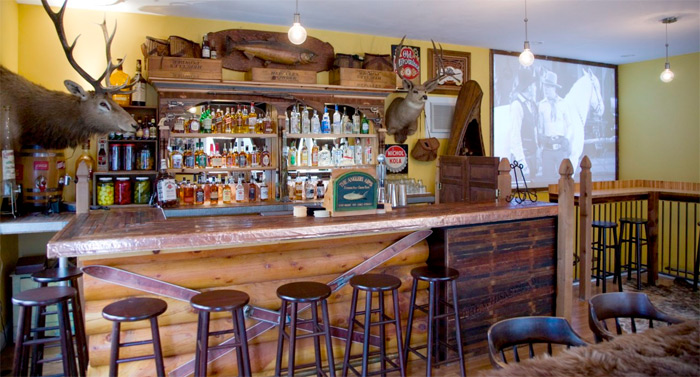 Best kept secret in Portland?
That’s a tough one….I’ll go with my buddy Chris’ barber shop The Modern Man here in northeast Portland. His barber shop has become more and more known as of late, but he opened a Whiskey Room upstairs complete with taxidermy, bear skin rugs, lumber, a projector, good eats and of course great whiskey. 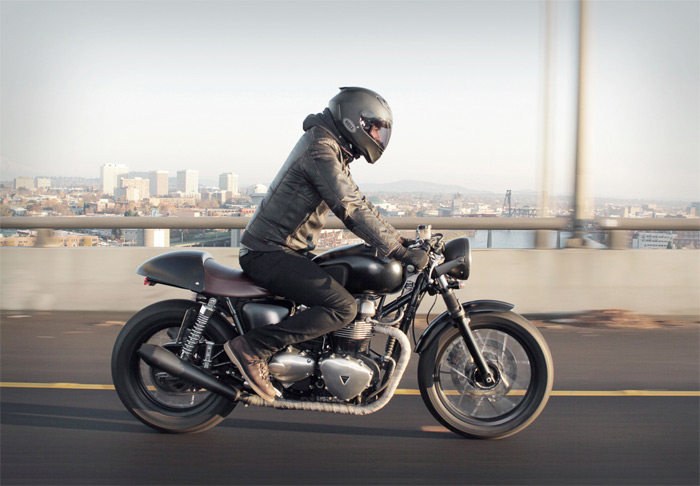 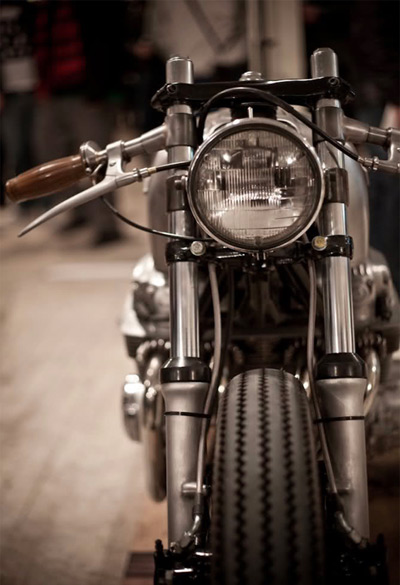 Most infamous landmark in Portland that you recommend someone to visit?
Probably the Shanghai Tunnels. I personally yet have been able to get down on a tour…they are becoming few and far between. I’m all about history and have been fascinated by the Shanghaiing that went on in San Fran, Portland and Seattle in the 1800’s.

Portland’s most beloved artist?
This is embarrassing being that I work as a designer, but I have no idea? I’ve really liked a lot of Corey Smith’s work because there was a more graphic approach to his compositions, but that’s about it. Art and music in Portland is everywhere all the time, so you kind of become overloaded and disinterested sadly. I’ve played in bands here forever and it’s always a struggle with so much going on all the time.

Favorite flavor at Voodoo Donuts?
Honestly, the one time I went there was about 10 years ago and didn’t live here yet. At this point I do everything to avoid donuts and the mile long lines they have. They used to have a NyQuil donut that got banned…I thought that was kind of funny.

Best place you like to grab some grub and a beer in you neighborhood?
I used to have a favorite place a few blocks away, but after the owner yelled at me for doing a table slap during a Blazer game I have yet to be back. Total bummer too, great wings, chicken and waffles and great beer selection. I had dinner the other night at The Laurelhurst Meat Market and it’s got to be some of the best food I’ve ever had. It’s around $25 a plate, but worth every penny. 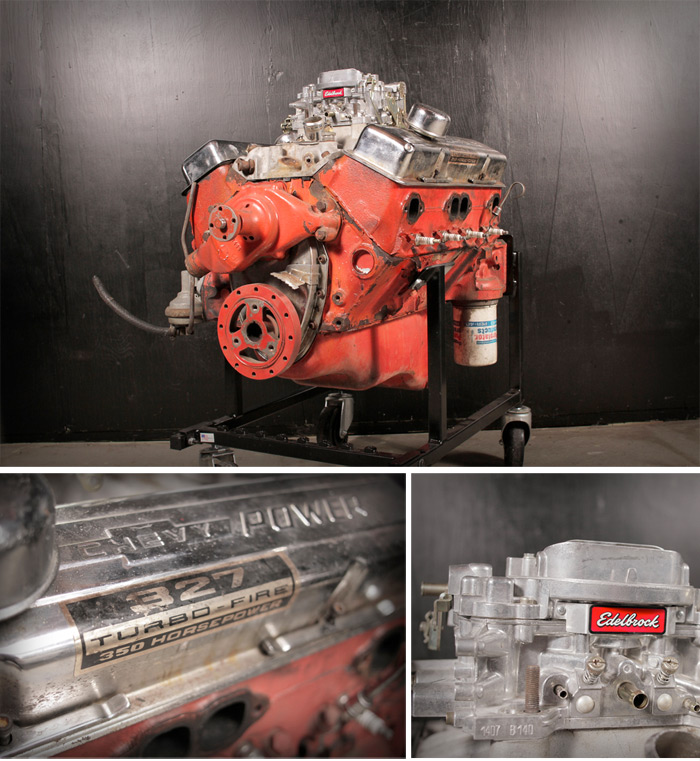 What’s ahead for The Tarantulas?
I personally have been slacking on motorcycles due to a 1965 Impala I picked up during the winter. So far we’ve rebuilt the motor to nearly 400hp, threw disc brakes / 2″ drop on it, ordered some wheels and getting ready to have Ginger from New Church Moto do the interior. When it’s all said and done it’s been about 100 times more expensive than rebuilding a motorcycle, but it will be worth it in the end. Next up for bikes we have a 550F we are building for a friend, Asa has a beautiful 350F that he’s spent 3 years making immaculate will we photograph soon along with a ’59 BSA Super Rocket , Rvi has an old Triumph and BSA that we need to get rolling and there is a long line of other bikes that are on the list. Really hoping this is the year for a few other Tarantulas to finish up their long overdue projects. 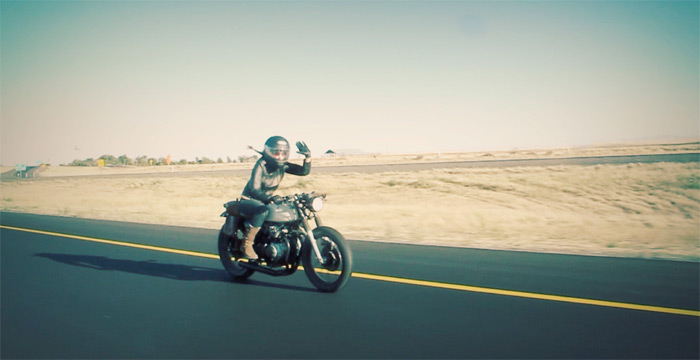