Fabricator/Designer Hugh Owings tells the story of 19-year-old Tevan Morgan and his first motorcycle build: a ’72 Yamaha XS2. Tevan worked on this build for over two years. It’s stunning to say the least. 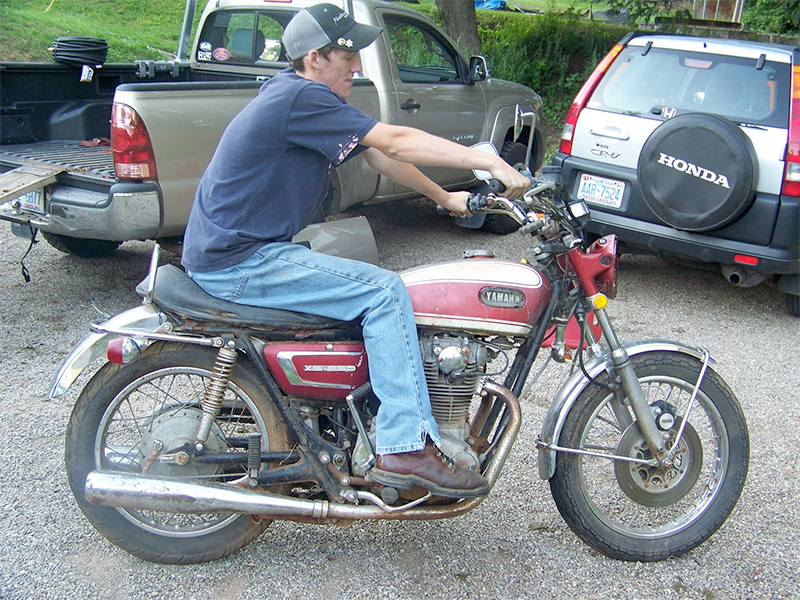 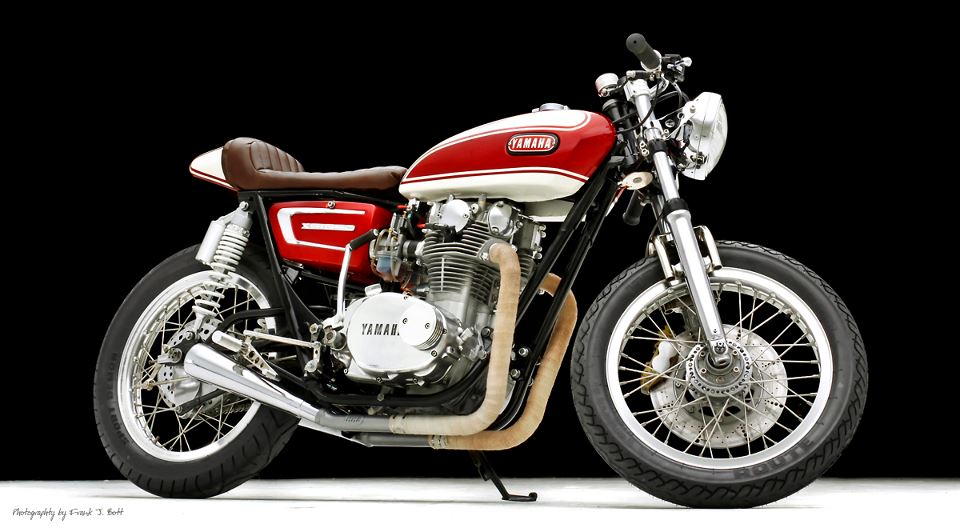 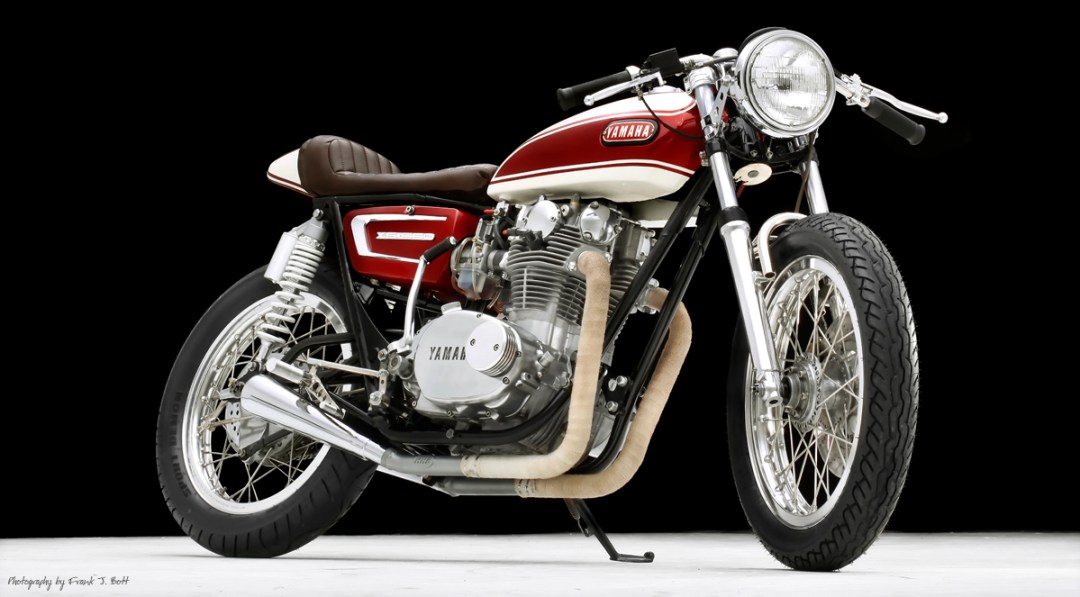 “When I started Hugh’s HandBuilt in my Basement/Garage, his Grandfather was my neighbor. One day his Granddad came down to the shop and asked if Tevan could earn some side money working in the shop with me. I looked at this dopey 17-year-old, and thought ‘Oh hell…’”
– hugh owings

Get the full story and more images after the jump below…

Tevan Morgan came to Hugh’s HandBuilt when we were just a lowly shop working out of my 300 square foot basement. He was young, motivated and wanted to work. Luckily I needed some help as well, as the shop was a total wreck, so I handed him a broom!

Wait what?? You heard me right, this young buck actually got a job sweeping the floors and ended up being Hugh’s HandBuilt’s most valuable employee. And what good HHB employee doesn’t want to build a cool custom bike right? 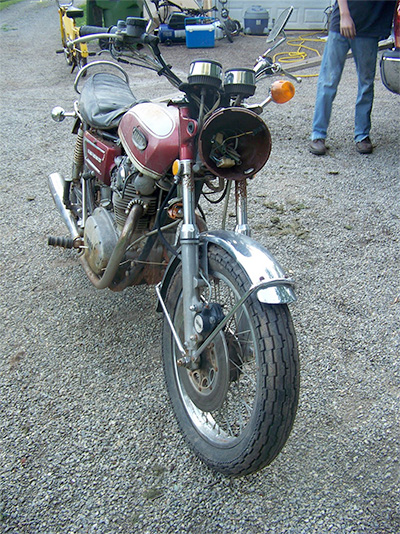 One day Tevan and I were shooting the bull, talking about bike, and he mentioned he wanted to build a Cafe’ project. I knew of a 72 XS2 laying in the kudzu at a friend’s house. It was in terrible shape, but the price was right and it a good start to a project. Being that Tevan was 17 years old at the time, he mostly spent his time disassembling, cleaning, and sketching out ideas on how he wanted the bike to look.

He finished this thing this year, and it’s just about ready to rip and shred on the North Carolina mountain roads.

Tevan built his own Rephased 277 Degree engine, using all the stock internals and giving the engine a solid freshening up at the same time. A Hugh’s HandBuilt PMA system was installed for a batteryless and reliable charging system. Top it off with a 277 Pamcopete ignition and Fueled with a set of High Velocity Lectron Carbs – and the engine was solid!

All of the aluminum on the engine cases were polished to a perfect shine of course, and the crank cases were aquablasted along with the cylinders and head. The engine is kick-only

Now for the chassis, Tevan built his own custom rearsets. No Bolt-On stuff here, keeping the chassis nice and narrow, and with the proper ergonomics to really make this build fit the rider. Lots of time on the lathe, mill and some hand grinding and blending was done to create the rearsets. We sent them out to be nickel-plated. 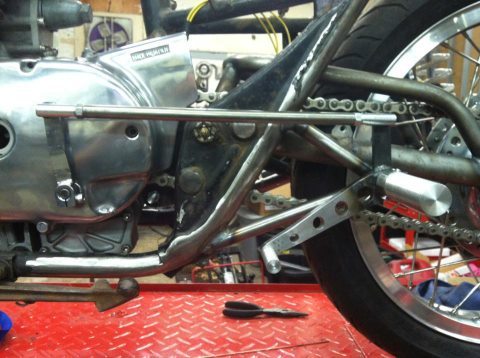 No off-the-shelf rearsets here, Tevan custom machined and built these rearsets to fit perfectly on his ride…

The rear OEM swingarm was beefed up with a custom brace, that Tevan bent in one shot. Not too bad for his first time ever bending tube. It did take about 3 days for him to learn how to notch the tube though, but once he had it down, it fit like a glove. I did all the TIG welding for him, as he hasn’t quite got the hang of that yet. We installed bronze bushings in the swingarm and called it good.

The frame itself received several mods to stiffen it up while we were at it. We wanted to keep the soul of the original XS2 alive, but create a totally 1-off Cafe’ that would be timeless… In order to do that, no fiberglass or plastics were used to create the tailsection.

“Tevan is proof positive that there’s a generation just waiting to work with their hands and create something that will last a liftetime if given the right dynamic. However, what we might lack are mentors like Huge Owings who are willing to take a chance on young bloods like Tevan.”
– crash 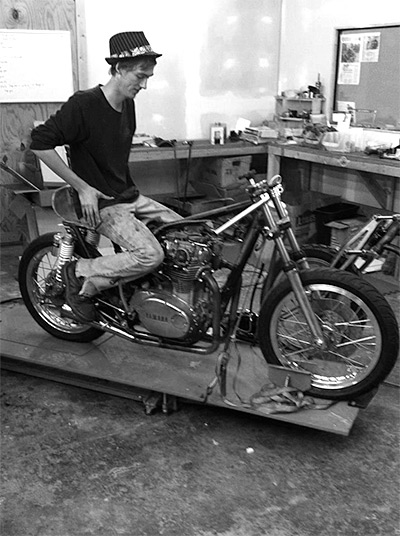 The Tail is a pair of old HD tanks, cut down and fitted together with a flat steel bottom. Tevan went to the mill, and started to build a taillight mount that we would eventually french mount into the tail. It turned out killer. A custom seatpan was covered by a local feller who redoes car interiors. 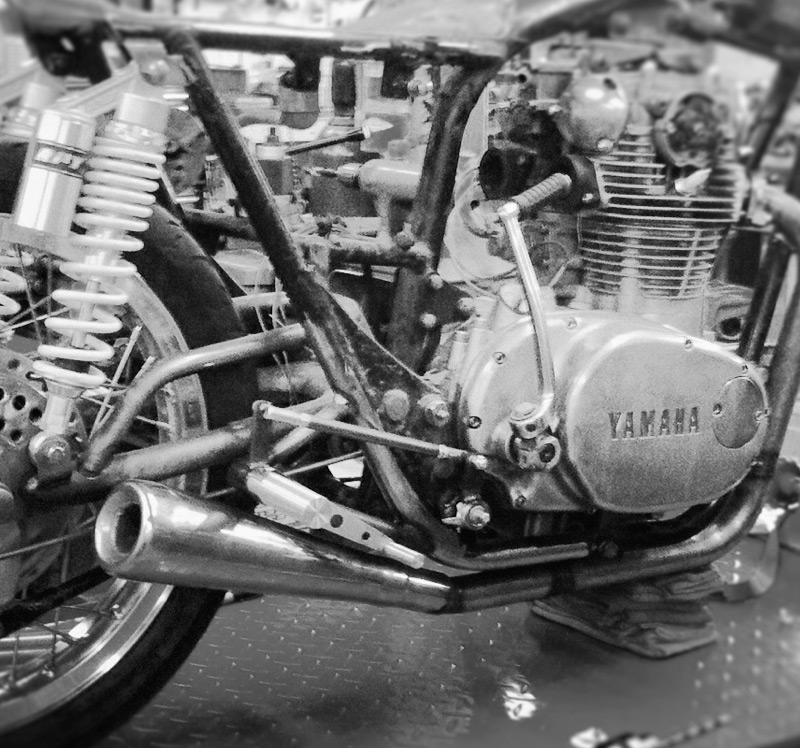 The tank itself was in rough shape. We cleaned out all the rust, found some NOS badges and a filler cap. Then we cut out the old junky style petcocks and installed 1/4 NPT bungs and universal petcocks on each side of the tank. The fresh paint was laid down my John over at Dills Paintworks – he actually was the dude we bought the donor bike from, so it was fitting that he sprayed the bike back to glory.

The paint colors are similar to the OEM, but just a tad brighter in the red, and a bit mellower in the white. The original paint scheme was kept, as a tribute to the style and character the original bike had from the factory. 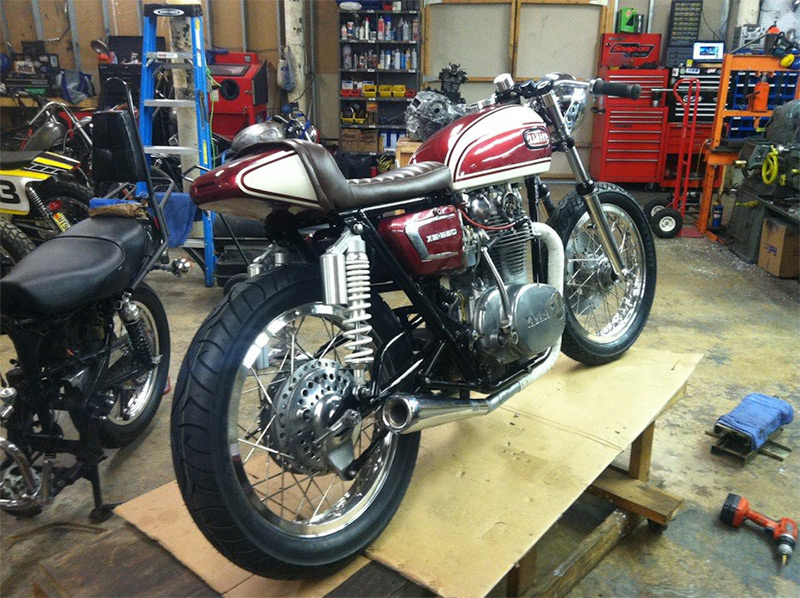 The wheels are custom 18″ Italian drop center rims from and rear, laced up with Buchanan’s Stainless spokes to a set of modified late-model XS650 hubs. Tevan laced and trued the wheels himself. The tires are Pirelli’s – to keep the power down and hook up through the curves.

The front forks are late-model 35mm XS650 forks, but we machined the triple trees and steering stem to keep the XS2 Steering Damper Assembly – a nice touch that really harkens back to when this bike left the factory. Tevan of course couldn’t leave that ugly plastic knob on the damper, so he spun up the 7075 Knob on the lathe. For that just right stance, we lowered the forks 2″ using our Hugh’s HandBuilt lowering kit.

“There are a ton of small parts that Tevan made for this bike, he had a hand in every aspect of the build and it truly is Tevan’s bike. He spent 2 years of his time and worked really hard to make this happen. It’s a might fine machine if you ask me. From floor sweeper 2 years ago, to a 19-year-old with a super sweet Cafe’ build – just goes to show a little hard work and a good attitude go a long way sometimes.”

We upgraded the front brakes using a Brembo brake swap kit from Pandemonium Customs. You might notice we stuck the brakes on the left side of the forks, something that always bugged me was the brakes being on the right side, so Tevan machined some more mounts and made the original rotor from a 73 model fit the late-model hub and Brembo brake caliper. We decided on a very subtle drill pattern for the front rotor. The idea was to keep it classic, not overly done…

As for the exhaust, Tevan found a set of NOS Bub pipes at a swap meet for an HD of some sort, he cut the mufflers off the HD pipes, cut and welded up his own headpipes and welded the mufflers on for a nice tight fit to the rearsets. The pipes sound great with the 256 Long Rod engine rephased…

The XS2 Side Covers were modded to clear the huge K&N Filters that hide behind them, and NOS trim was found and put into place on the freshly painted covers. 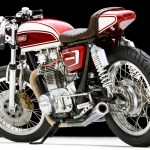 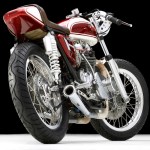 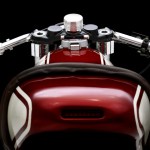 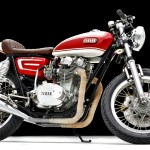 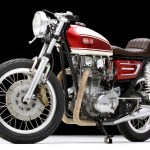 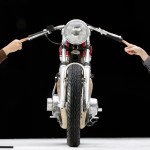 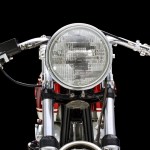 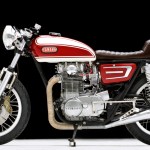 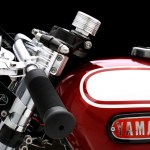 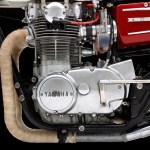 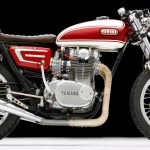 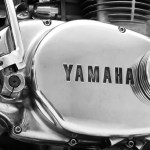