Derringer Cycles, from Los Angeles, is one of our favorites things on wheels around here. Classic designs that look like museum pieces. We’ll be back. 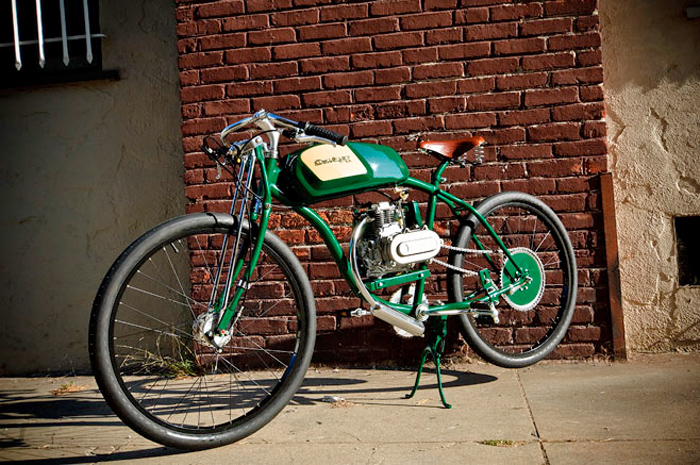 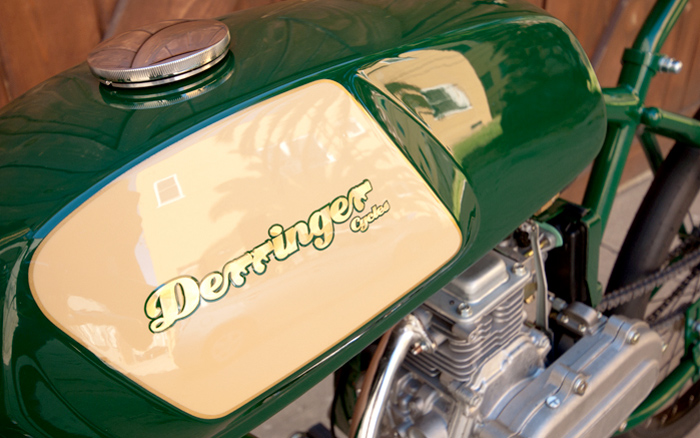 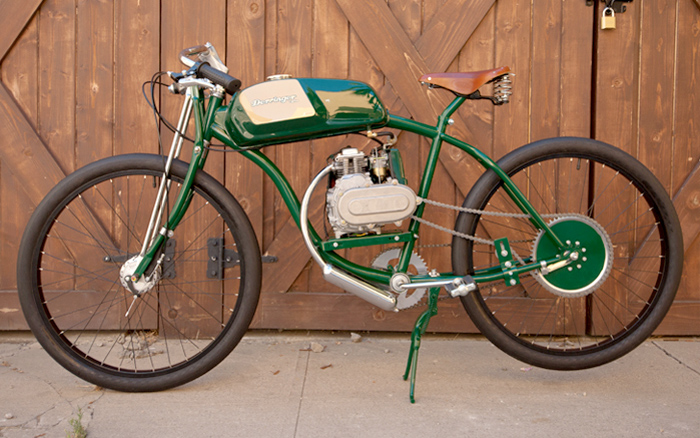 About the H. Laurie:
Good things take time, Mr. Laurie heard that we had a waiting list, and he wanted to get on that list with a deposit. You have a little time to pick out your colors, we explained. Presenting customers with a choice of 250+ colors can make settling on a color scheme tough, real tough in some cases. The good doctor could not decide on a color scheme for nearly a year. It was worth the wait, a vintage inspired colorway produced one of our classiest bikes to date.

Derringer’s own Adrian Van Anz was good enough to tackle a few questions.

What’s your background? What influences you?
I’m a Santa Monica native, the son of an eccentric architect father and a mother who was a teacher and photographer. I grew up riding motorcycles, riding mountain bikes in the Santa Monica mountains, and surfing. I was inspired to create Derringer by that twinge of fear you felt as a kid when you knew you are going just a little bit too fast on your bike. I love design in all its forms but my favorite things list is heavily populated with shiny wheeled objects.

How did you first find out about the motorbikes and motordrome of the 20s?
I grew up fascinated by motorcycles and when I saw my first image of a board track racer I was in love. They just look so pure and focused. I devoured anything I could find on them.

It was a fairly popular (and dangerous) sport back in the 20s — wasn’t it?
It was the most popular spectator sport in America, and the fact that it was all but outlawed at the height of its popularity is the most interesting part of the story to me. It’s like the James Dean of motorsports, it never got stale and boring and regulated to death, it went out in its purest form at its prime.

How did you decide you wanted to design and build a motorized cycle?
I had a collection of motorcycles and a collection of bicycles, the experience of using each was so different, I was looking for something between the two. I was hoping to capture the feeling of freedom that you get when coasting on a bicycle, I wanted to make a bicycle that would coast uphill.

I was inspired to create Derringer by that twinge of fear you felt as a kid when you knew you are going just a little bit too fast on your bike.

You work on commissioned bikes, what was the best collaboration you ever had with a client?
I created a special model for RRL stores with Ralph Lauren’s son that was designed to capture the look of the Hughes H1 airplane from the 30’s. It also featured design elements from the Hollywood RRL location, that collaboration would be high on my list, but my favorite would be the bike I created with Philippe Starck.

These bikes have such a classic look about them. If you could build a bike for anyone from the past — who would that be and why? What colors would you recommend for this ghost client?
Steve McQueen, I’d do a bike to match his 63 Ferrari Lusso in chestnut brown, unconventional and cool.

I see that Derringer bikes have a range of 180 miles per gallon — what’s the top speed?
They go up to 35mph

The Heritage Leather Jacket that you sell has a nice look about it. What other accessories are you thinking about introducing? Helmets? I see that you designed a stellar-looking one for “Name Withheld.”
I’m sketching ideas for messenger bags at the moment and we’ve actually finished out a whole line of apparel that will be available online and in stores soon.

I know these bikes must be like children, but what’s your favorite bike?
My favorite bike was the first one. I feel like that bike had a lot of luck in every component. When things go from an idea to an actual object, there is always a magic moment during the process when you step back and realize that it’s going to work, or that it just doesn’t translate. That first bike worked so well. I’ll always love the first one the most.