Jochen Paesen is a car designer for BMW where he plays an active role in shaping the interiors of its future cars. Jochen is also a skilled photographer and artist who knows how to capture a moment in time.

“I currently live in Munich and work for BMW Design. I was born in Belgium where I spent the first 9 years of my life. Before moving to Germany I also lived in South Africa, France, England and The Netherlands. Despite moving around so often I feel at home wherever I live. It has broadened my way of thinking and has allowed me to discover new cultures and learn new languages, which has been a valuable way of stimulating my creative thinking.”
– jochen paesen

What projects have been involved with at BMW?
I was one of the designers of the 2009 BMW Vision EfficientDynamics Concept Car. I consider myself very lucky to have been selected as the interior designer for this showcar. That was an amazing project. As a small team we were given the opportunity to create our vision of BMW. A once in a lifetime experience!

I was also a part of the design team that designed the current 6 series.
Due to the high confidentiality of our job I can not go into detail about what else we do but the great thing about BMW design is that we get the opportunity to work on concept cars, future proportion studies as well as production cars. It is this flexibility that allows us to keep pushing our design vision and stay in tune with new technologies. 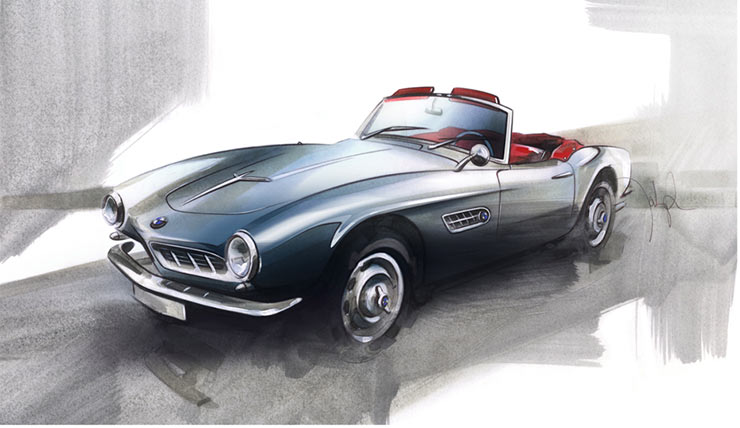 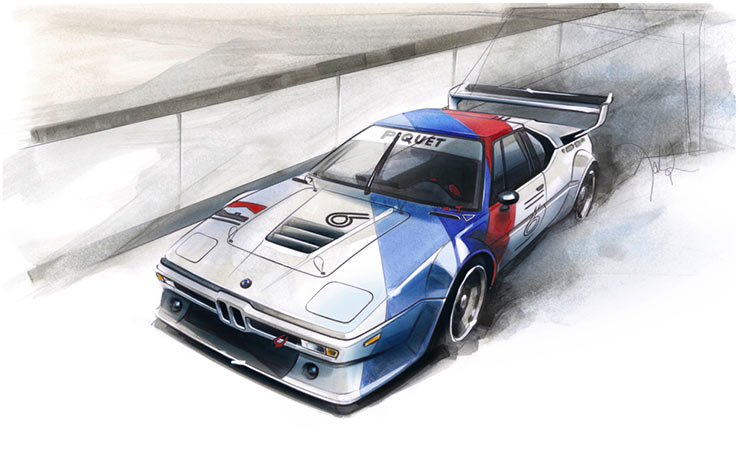 Where does your interest in cars and car racing come from?
Cars have always played an important role in our family. My father took me to watch car races when I was still very young. This is how I developed an interest for racing.

I got introduced to racing in the late 70’s and early 80’s when it was still a very different sport. Raw and dangerous. We watched legendary racing drivers race on some of the greatest circuits. As a child I remember this incredible buzz that I still get when I watch races live today.

On your site, you mention, “As a designer, art and photography are never far away…capturing a moment in time, often as a close up.” Can you elaborate on “capturing a moment in time,” and how that differs in these two mediums?
As a designer I am very much a visual person. I remember things from when I was a little boy and can still picture them perfectly today. Often in the finest details, with all the feelings and emotions that come with that particular moment. For me art and photography are a way of capturing a moment like this.

A good photograph attracts the onlooker, there is a form of connection. I use photography as a way of ‘framing’ a moment. I am self taught, which basically means it all happens by trial and error. The nice thing is that it leaves room for surprises. My photos don’t have to be technically correct, it is more about whether it pleases visually. For me it is simply a continual search for aesthetically pleasing things. This is why photography is a never ending school of learning.

My artwork often depicts cars that have a story. For that short moment when you are looking at the artwork you can “feel” the car, it is more than just a drawing, it expresses the power, the drivers concentration…capturing a moment in time. 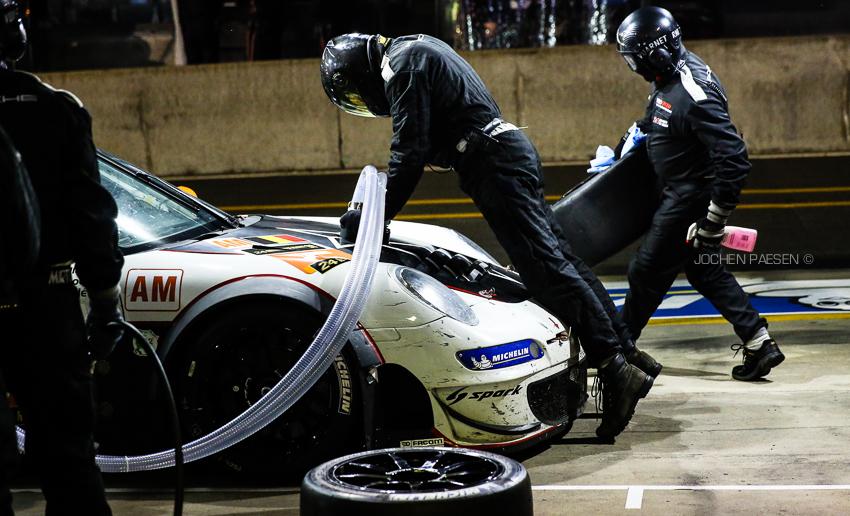 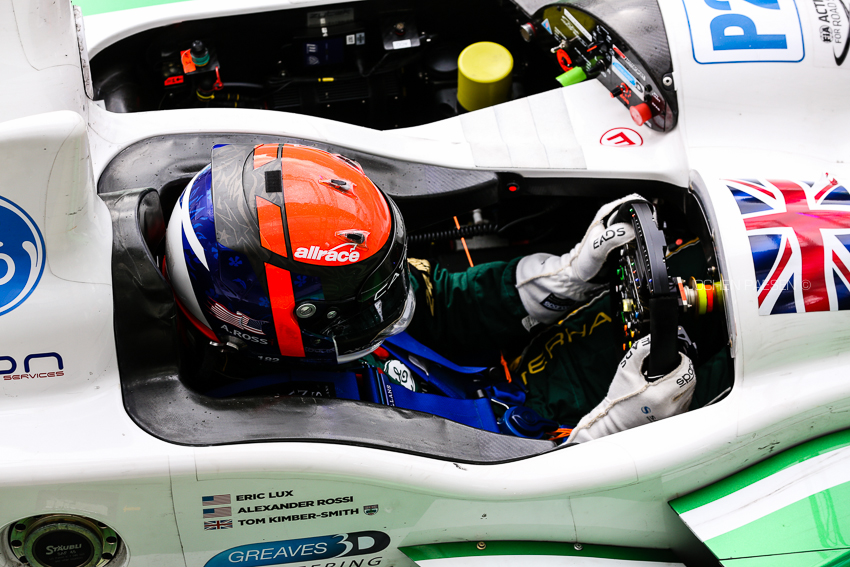 You photographed the 24 Hours of Le Mans 2013. For those of us who’ve never been there, what’s that experience like?
It is addictive, so much so that I have been going for the last 22 years. It has become tradition to celebrate this event in good company, with my dad, brother, cousin and the many friends we see there each year. 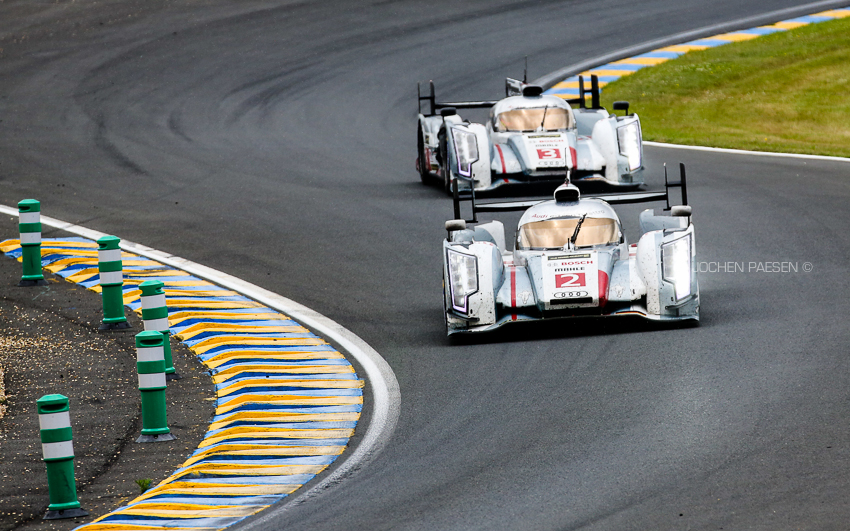 Le Mans is an incredibly fast circuit for which each driver has respect and you feel this, it hangs in the air. It is a very touch circuit for man and machine. 24 hours at the limit, day and night, sun or rain. Many teams and drivers work all year just for this one race. A mechanical problem or a small mistake can end your race and that constant pressure is really electrifying, even as a spectator.

The magic of Le Mans is in part also what happens the days leading up to the race. It is great to walk around and admire all the wonderful cars on the various camp sites and in town. From the moment you arrive the excitement builds up hour by hour with the climax on sunday afternoon when the race finishes. It feels very special when you see them cross the line after such a grueling event. I can not even begin to imagine what it must be like as a racing driver!

As a hobby photographer I don’t have access everywhere. I love the challenge of finding ways of creating interesting photos. You need to make do with the options you have and that is a nice challenge. The aim is to capture typical scenes in a different way or attempt panning shots standing on a ladder or hanging in a tree to not be obstructed by the catch fences separating spectators from the cars.

Going every year for 22 years, that’s amazing. What’s the biggest change you’ve seen over the years?
A lot has changed. The layout of the track has evolved several times. Safety has become very important, more catch fences have gone up to protect the spectators but means we are now further away from the action.

I remember seeing the rotary engined Mazda 787B win at my first Le Mans visit. We have had the Porsche, Mercedes and McLaren era. The period in the end of the 1990’s was pretty special too. Waking up in the middle of the night in your little tent and knowing instantly that the Viper or Panoz are still in the race as you recognize their unique engine sound straight away. You would literally be shaking in your sleeping bag as they rumbled past. Now we are going through the era of quiet Audi’s and Toyota’s but the competition between them is so fierce and exciting to watch. 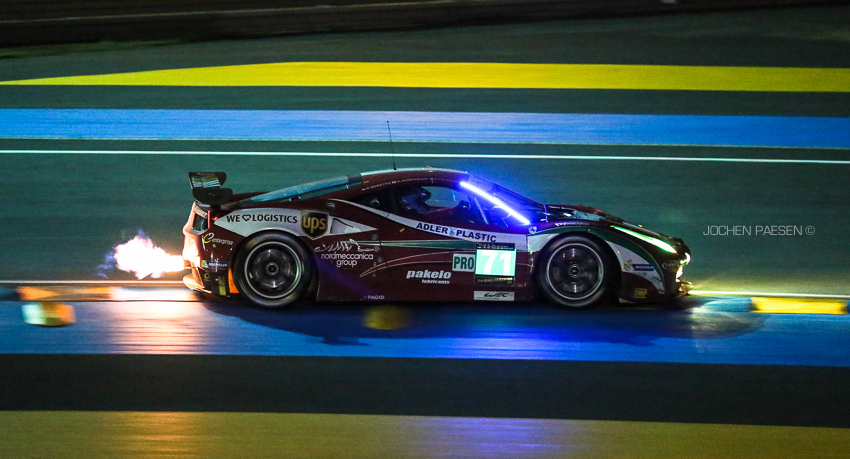 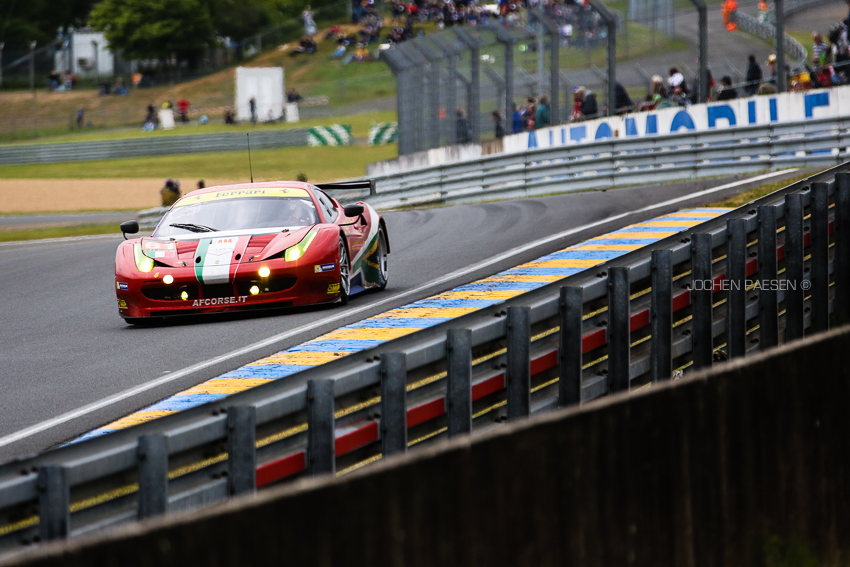 What artists have influenced you the most?
A little while ago I discovered an artist by the name of Jerome Lagarrigue. I am absolutely amazed by his work. He brings emotion to the canvas, you can’t NOT be touched by what you see. His style is loose with quick brush strokes but the picture as a whole is tight and precise. I love paintings that you can enjoy from a distance but also as a close-up where it becomes abstract art.

What designers have influenced you the most?
I am not so much influenced by designers as people, rather I admire designers that have been able to make a difference. I admire those that created a product or service that has changed the way we do or see things.

I have been fortunate enough to work for Chris Bangle who is one of those people who is able motivate a team to push the boundaries and create new things. Not affraid to ask questions and leave your comfort zone in search of something new. Time has shown that his approach has been very influencial for the whole car industry.

If you could drive any race car from the past, what car would you choose?
That is a difficult one as there are so many. Each era has it’s race car. If I did have to choose one it would be a Porsche 956. This car is obviously a racing legend, set record after record and all of the great endurance racers drove a 956 at some point.

Why I choose this car though is more because I watched it race in the mid 80’s at Kyalami (South Africa) where it left a lasting impression on me. This car looks efficient and fast, simply a masterpiece. In those days you could just wonder arround in the pitlane, touch the cars and meet the drivers. Being among these cars as a little boy, makes the 956 my favorite choice.

If you could attend any car race in the world it would be?
I have been fortunate enough to attend many racing events. The Indy 500 is one that is still missing. The excitement is touchable even from behind my computer screen in Europe. What must it be like to be there! I have never been to a racing event in America and this is definitely on my to do list. 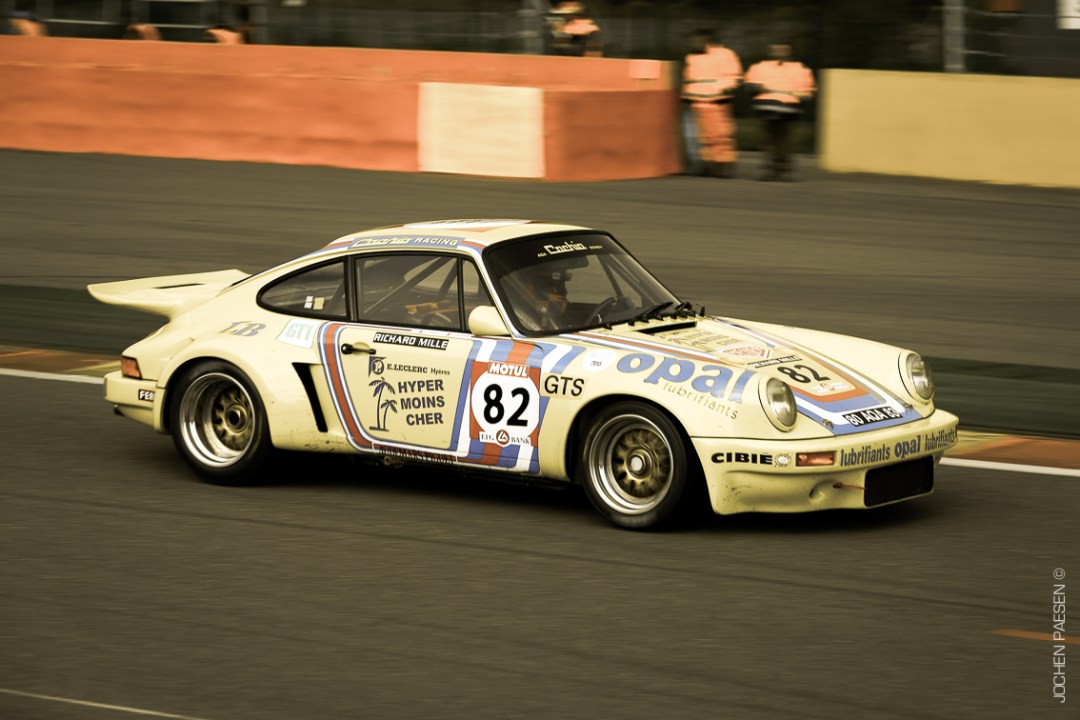 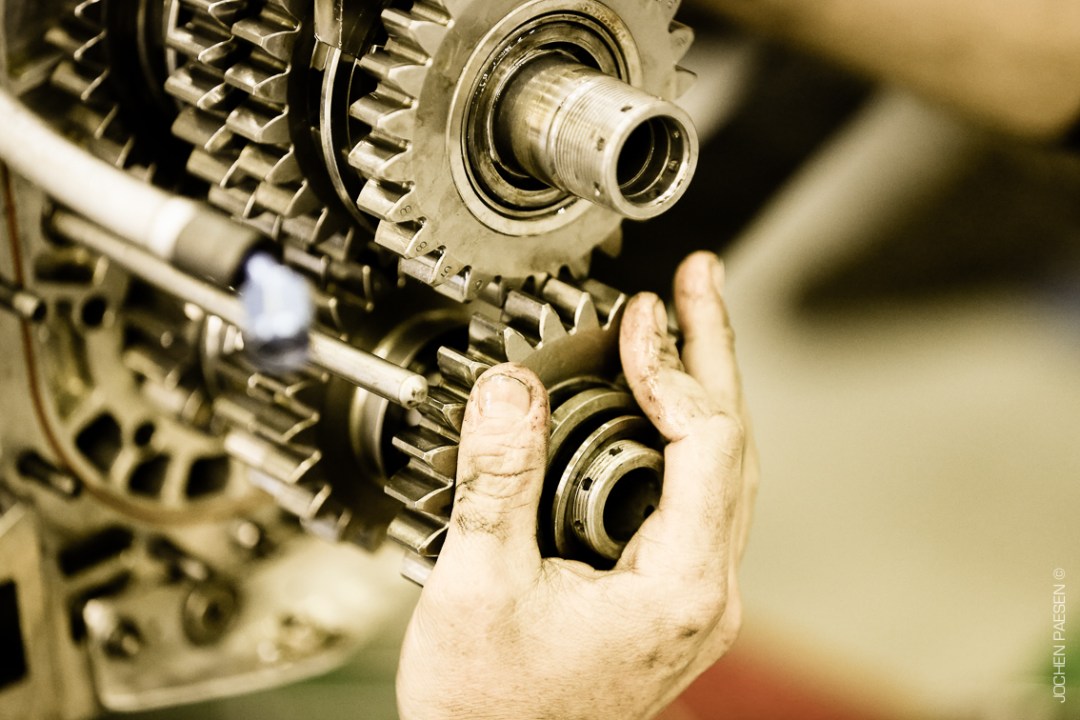 What other races have you attended? Which one of these was the most interesting to you?
I like all types of racing from Formula 1, F3, DTM, one-make series, endurance racing right through to classic racing, bikes and much more. I have attended them all.

Some of the most amazing circuits must be Le Mans and Spa-Francorchamps in Belgium. Attending a classic race meeting in Spa is like going back in time and it is great when you can watch these oldtimers race.

The most interesting race that I have attended must be the Nürburgring 24 Hours. The ‘Nordschleife’ as it is known, is about 25km (15.5 miles) long and about 200 cars take part during this event. It must be the hardest circuit in the world, so many uphills, downhills, and corners, often in tricky weather conditions. It is not called the Green Hell for nothing!

What are you working on now and what are your upcoming plans?
Currently I am working on our next generation of BMW’s. As a team, we are working very hard to make these products amazing and an unforgettable experience for our customers.

Regarding my artwork, I am looking forward to do the next commissions for clients. It is always great to put their beloved car on paper. I love drawing and it is great when I can share my passion with others. 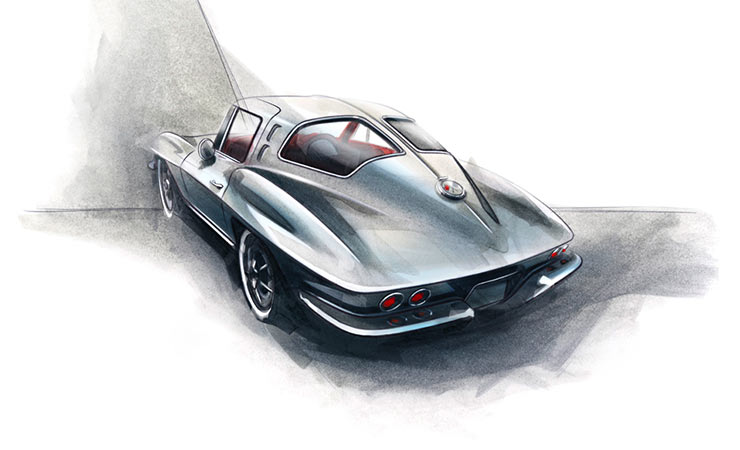 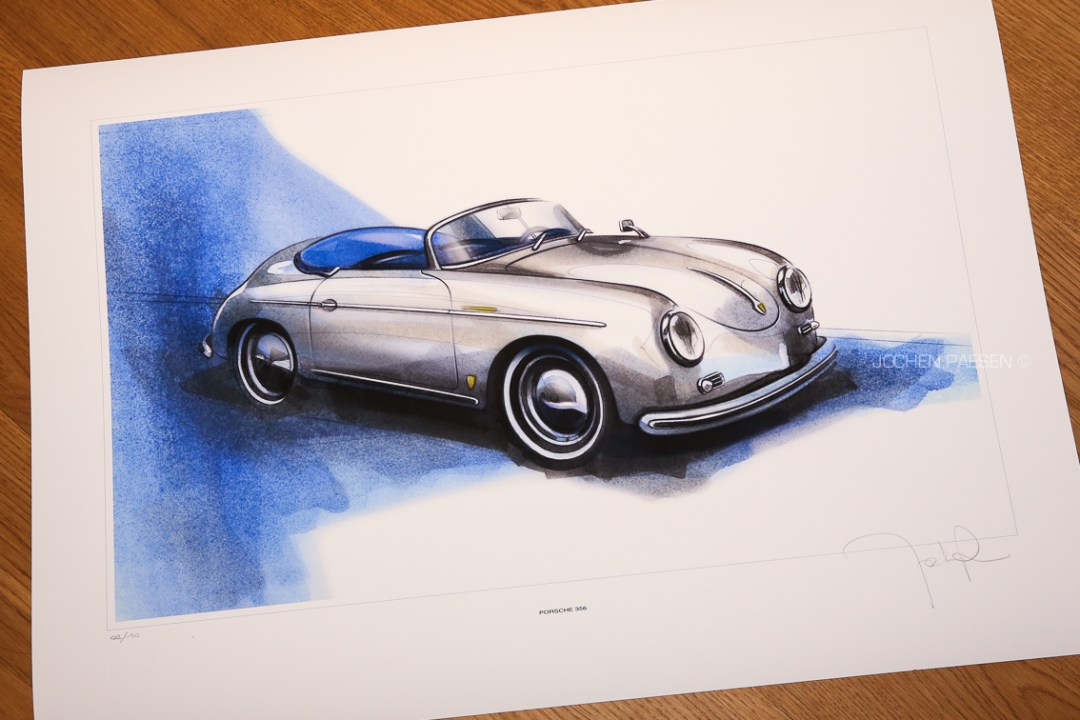