Scooter Grub has been shooting for over forty years. His images of the BUB Motorcycle Speed Trials always generate attention around here. In our interview, Scooter lets us in on the story behind his stunning photos and why he keeps coming back each year to “The Salt” and The BUB.

“The ‘Salt’ is about 60 square miles of the most magnificently barren real estate in the world. The only place on the planet where you can actually see the curvature of the earth.”

I have been riding motorcycles for the past 40 years and have been a camera junkie for a little longer than that. I am truly blessed that I have been able to meld the two passions in my life into a vocation. I have shot events and motorcycles for feature publication for most of the major national motorcycle magazines over the past 20 years and my work at the BUB Motorcycle Speed Trials on the Bonneville Salt Flats in Utah is published internationally on an annual basis. 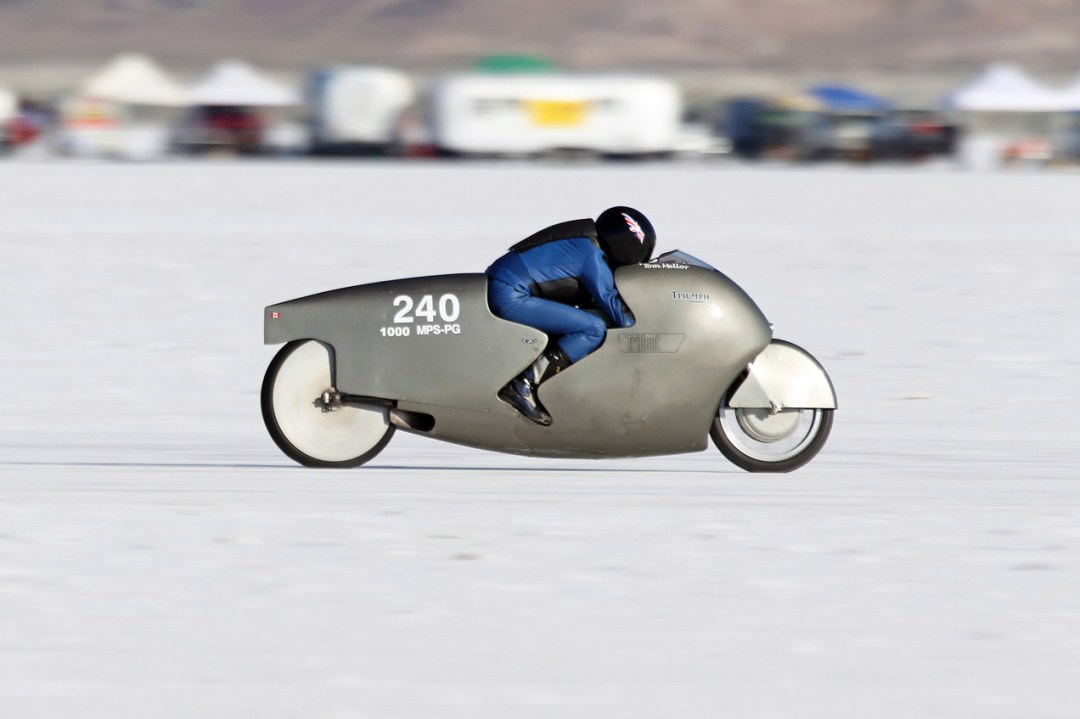 How do you explain the BUB to someone who’s never heard of it?
The BUB Motorcycle Speed Trials is the only “motorcycle only” land speed event held on the historic Bonneville Salt Flats. The “Salt” is about 60 square miles of the most magnificently barren real estate in the world. The only place on the planet where you can actually see the curvature of the earth. Since the early part of the 20th century it has become the place where men, and recently women, come to make history. Created for this event is a track like no other. 11 miles long start to finish in a straight line. You’d be surprised how many times you have seen the Salt on TV and never knew it. It is a favorite place for care companies to shoot commercials and the movie Independence Day was shot there, so even if you thought you have never seen Bonneville you probably have. 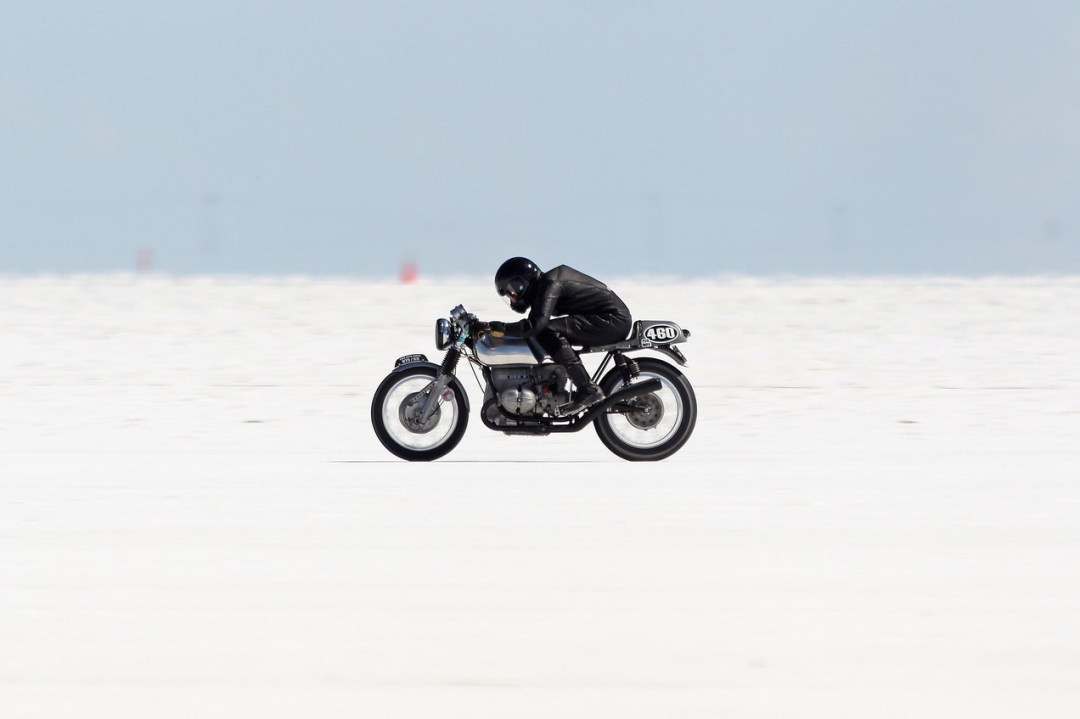 When did you start shooting the BUB?
I made my first trip to Bonneville in 2006 with a friend, Keith Ball. Keith was the editor of Easyriders magazine for over 20 years and for the 2006 event he built a panhead, the “Salt Shaker”. His goal, like so many, was to etch his name in the record books with the world’s fastest panhead. I tagged along to capture the event in pictures for a book he would produce. The experience, the place and the people were so incredible that I vowed to go back regardless of whether or not I was being paid. And so it began. 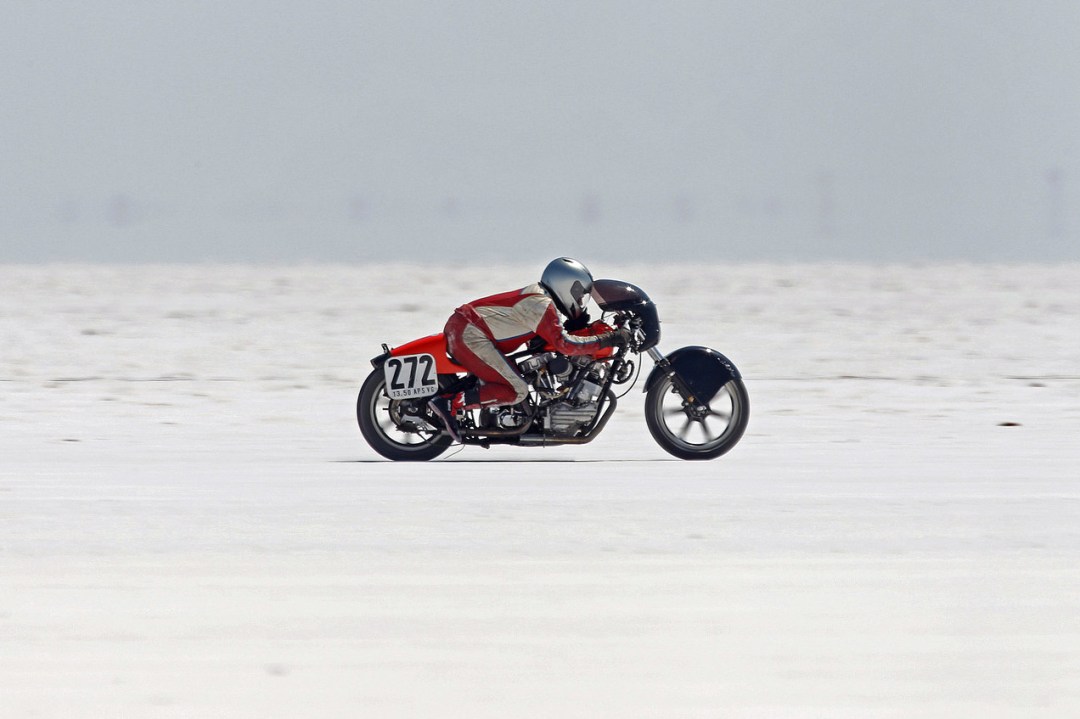 What’s the biggest challenge about shooting at the BUB?
The Salt creates one massive reflector so there is light EVERYWHERE!!! Shooting motorcycles, most running in excess of 200mph, and being around 500 feet away from them at their closest point does present some special circumstances. There are two tracks at the event. The “Mountain Course” is 5 miles long with entry points at the “0” mile and returns from the “5” mile. The “International Course” is 11 miles long with entry points at the “0” and “3” mile and returns runs going the other way at the “11”‘ mile and the ‘7″ mile. So you have two tracks with a total of six entry points running in both directions at any given time and I get to stand between them, 500 feet from both and frequently shooting in both directions. Doing this while carrying an 800mm lens all day can be very taxing. But it is what it is and you make the best of it. 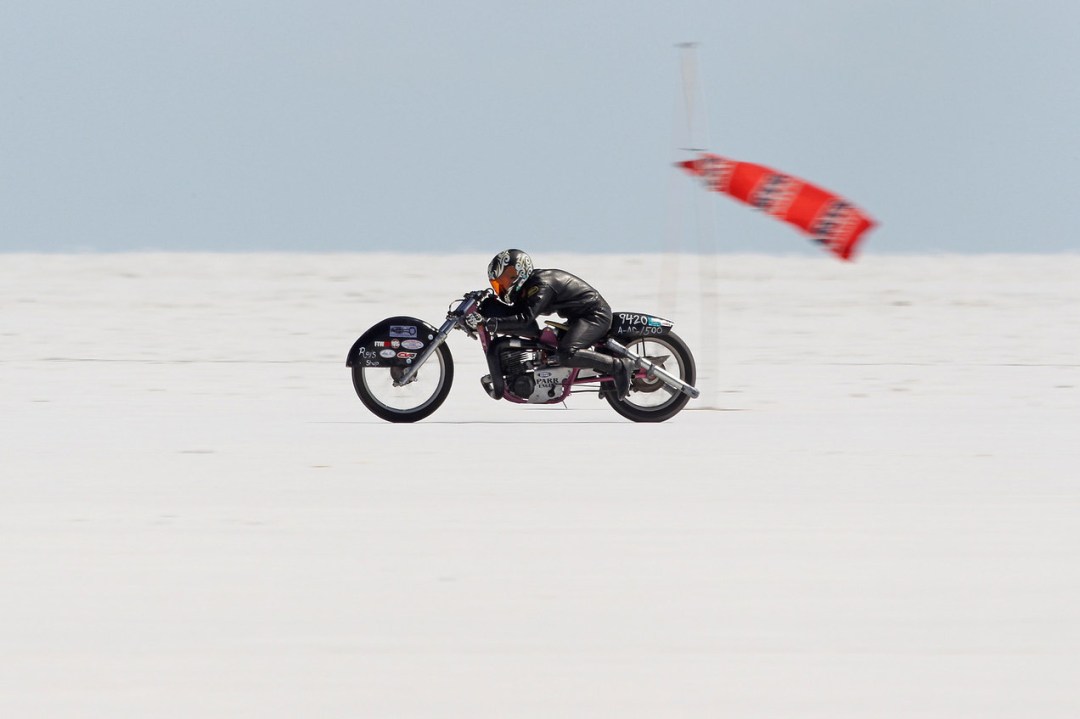 No prize money, and no trophy from what I’ve heard.
There is no prize money at the BUB event. There are coins that you can get if you exceed 100, 150, or 200 mph,, all of which you will gladly pay for if you earned them. If you exceed 200mph officially, you qualify for the “Red Hat” club. You will receive a red hat denoting your membership. As there is no prize money or trophies then why? The answers to that question may be as many as there are racers. Personal goals, your own little piece of history, bragging rights or just the rush of being able to go flat out for 11 miles without looking over your shoulder for red and blue flashing lights. It is the passion with which these folks approach the event that is truly special. These are truly special people. 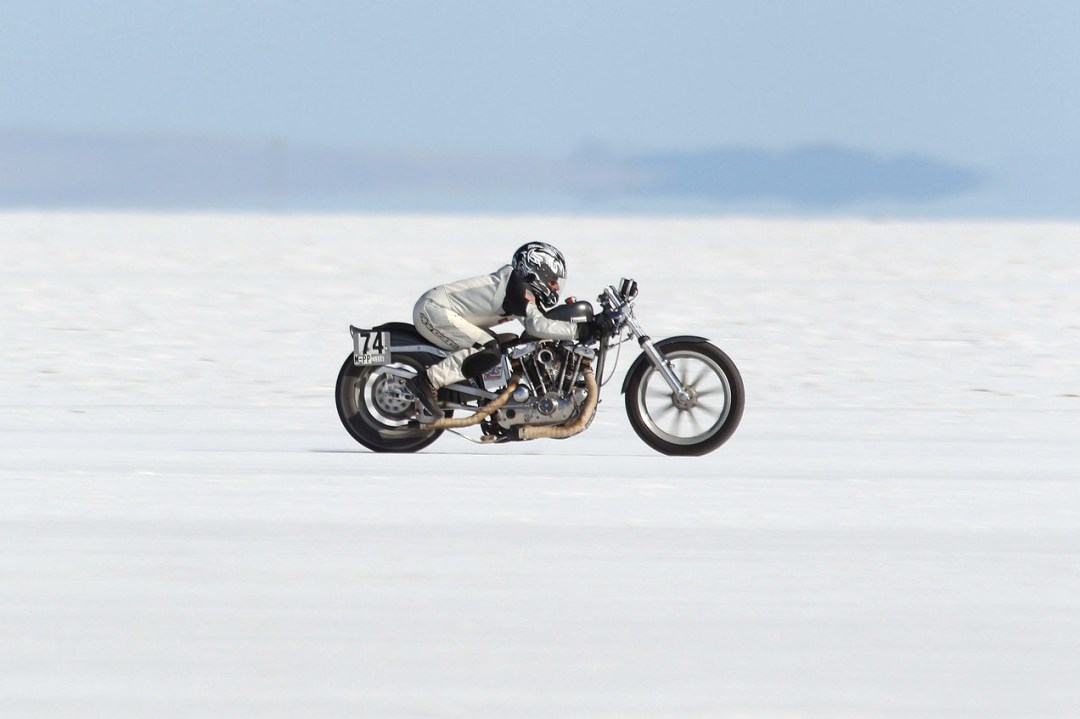 There seems to be a real sense of community out there amongst the participants.
In 2010 I spent 10 days shooting the Sturgis Black Hills Rally with 600,000 of my new best friends for a book on the 70th anniversary of the event, actually I knew about a dozen people there and a couple weeks later I was on the Salt with about 300 land speed racers. I knew virtually all of them. This truly is a fraternity, a very small fraternity but a fraternity nonetheless. I have seen people loan their competitors everything from a wrench to an entire engine. This is the last bastion of the motorcycle purist. No chrome trinkets or bobbles … If it don’t make you go fast it has no place on the Salt. There is considerable competition but to a person, the camaraderie is more important. It is unquestionably the shoot that I look most forward to annually and that is because I love these people. 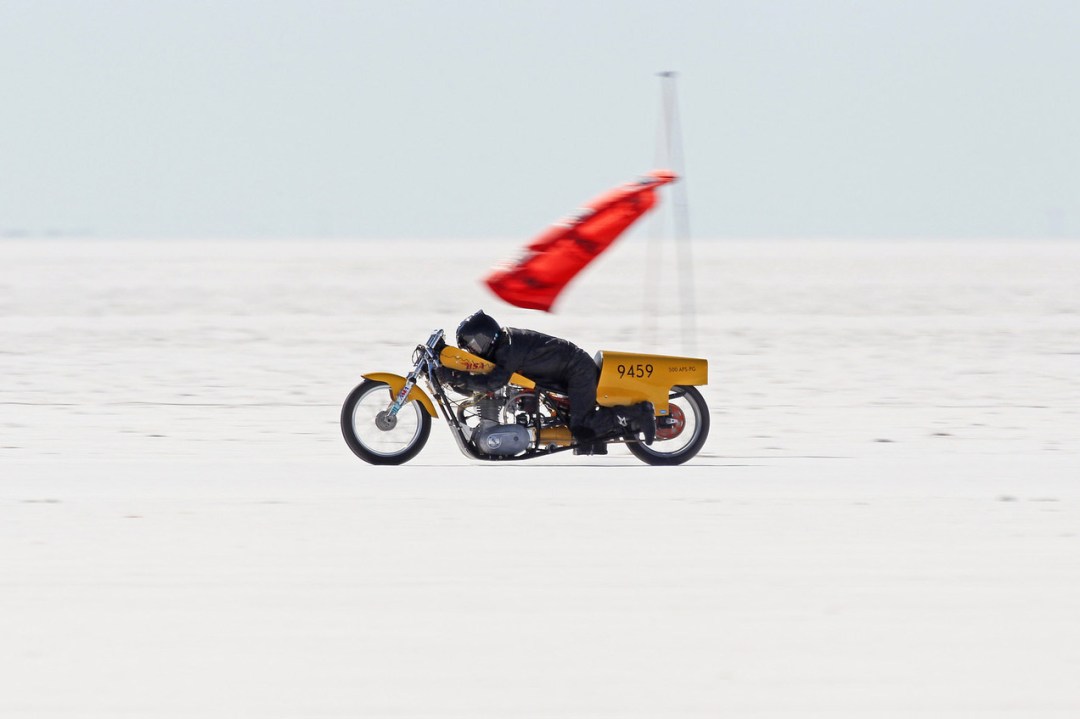 Most memorable motorcycle you ever shot?
Every year I think about that very thing … its what shooters do. The reality is I realize that about 90 times a year I photograph history. That’s how many records are set annually. I get to photograph something that has never been done before about 90 times a year. I have photographed The fastest motorcycles in the world including Leslie Porterfield, the Guinness Book’s Fastest Woman on a conventional motorcycle, Chris Carr and Rocky Robinson who have traded the title of the Fastest Motorcyclist in the world at over 360mph. Picking one shot ? Too tough. 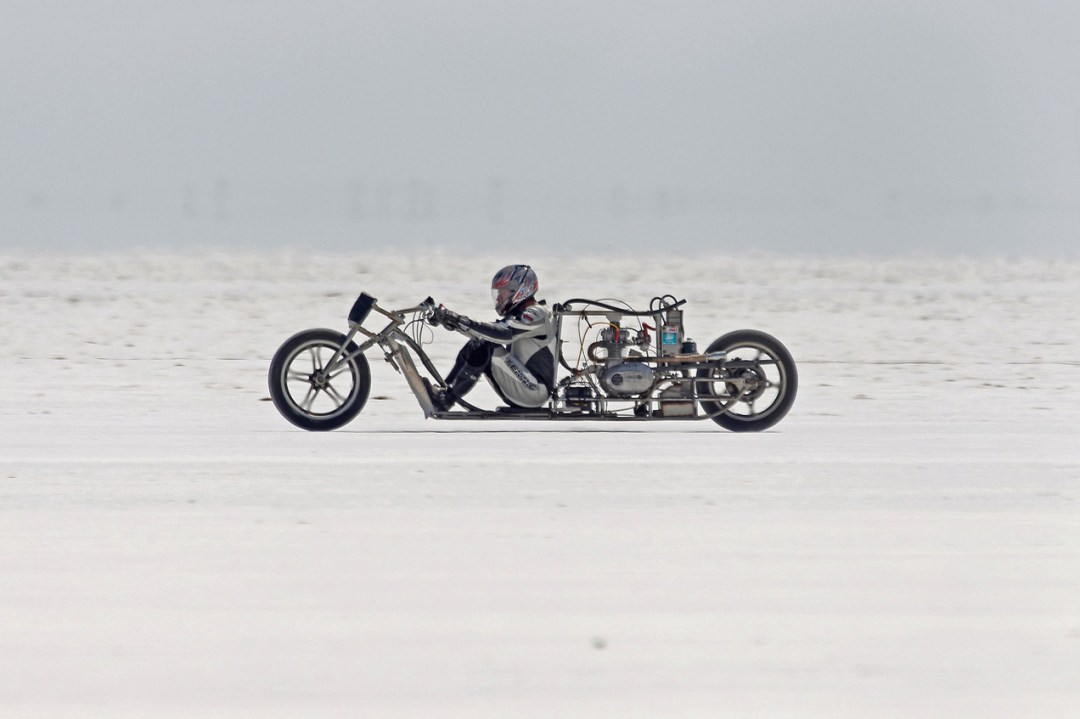 “This truly is a fraternity…I have seen people loan their competitors everything from a wrench to an entire engine. This is the last bastion of the motorcycle purist. No chrome trinkets or bobbles…If it don’t make you go fast it has no place on the Salt.”

Do most of your best shots come from perfect planning or “perfect” accidents?
More often than not, perfect accidents. When you shoot a lot of events you just try to capture everything. All too often you’re not even sure what you have until you dump the cards. 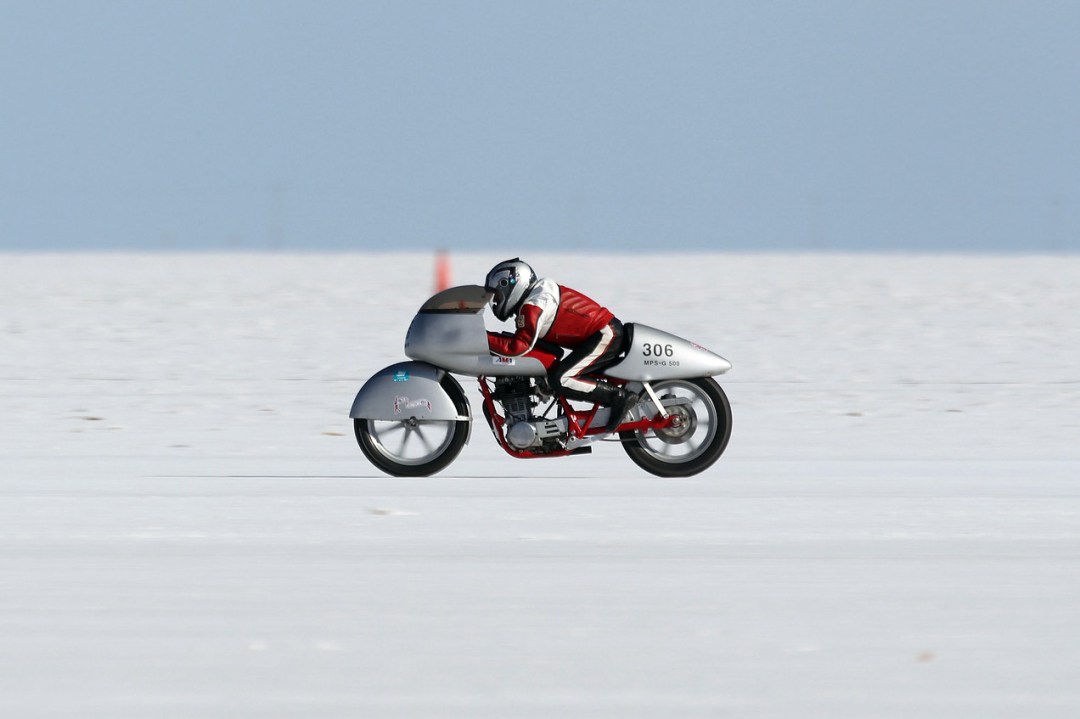 As you see it, what qualities does a good photographer possess?
Like any other art form, you can see the artist’s passion in his or her work. This is not the kind of work that you answer a help wanted ad for. 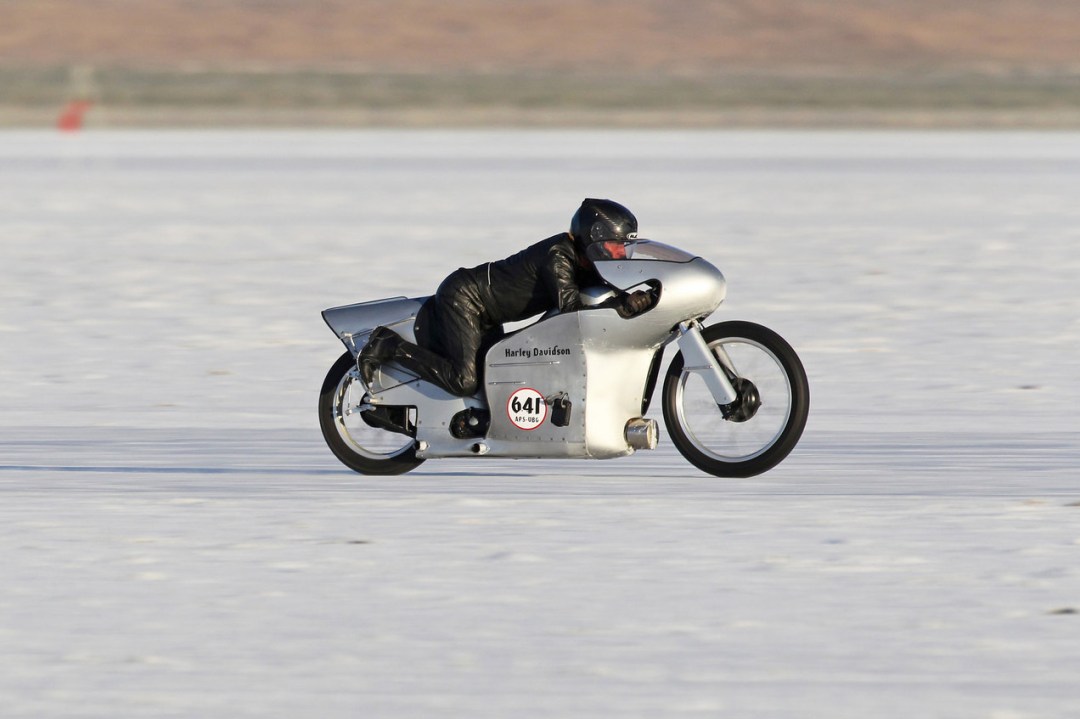 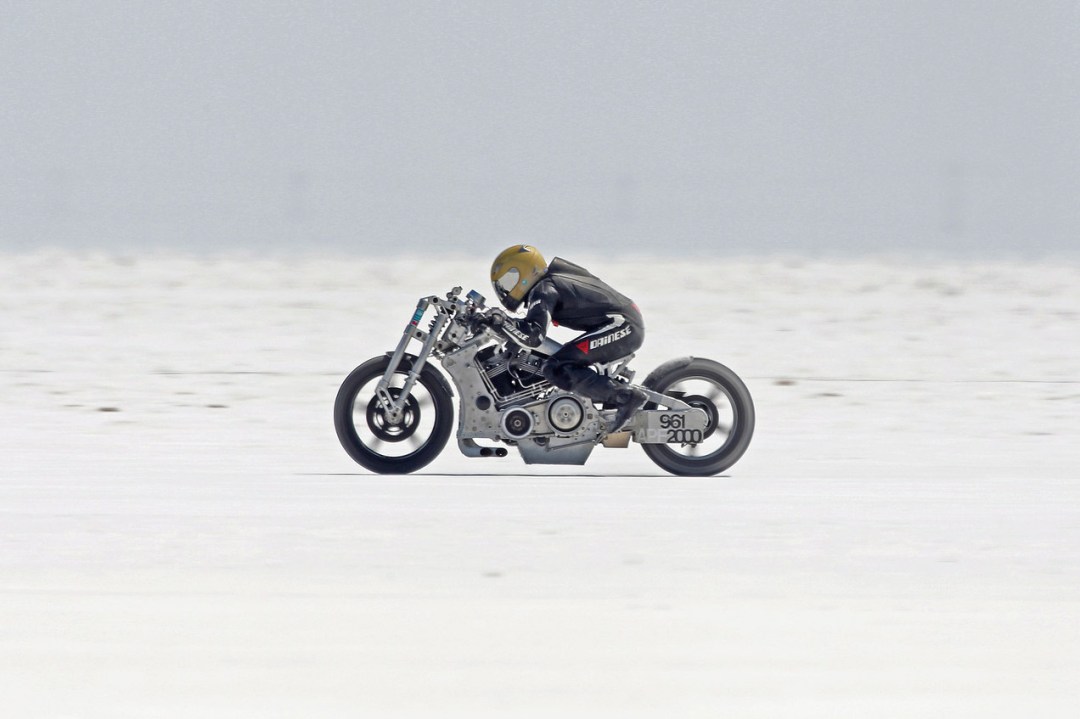 Your favorite photographer?
In our industry you have Michael Lichter. He has brought more iconic images to the two-wheeler enthusiast than anyone. He has shot for over 30 years for Easyriders magazine and I have had the privilege of sharing a spot with him a couple times. Not only is his work iconic but he is just a great guy. 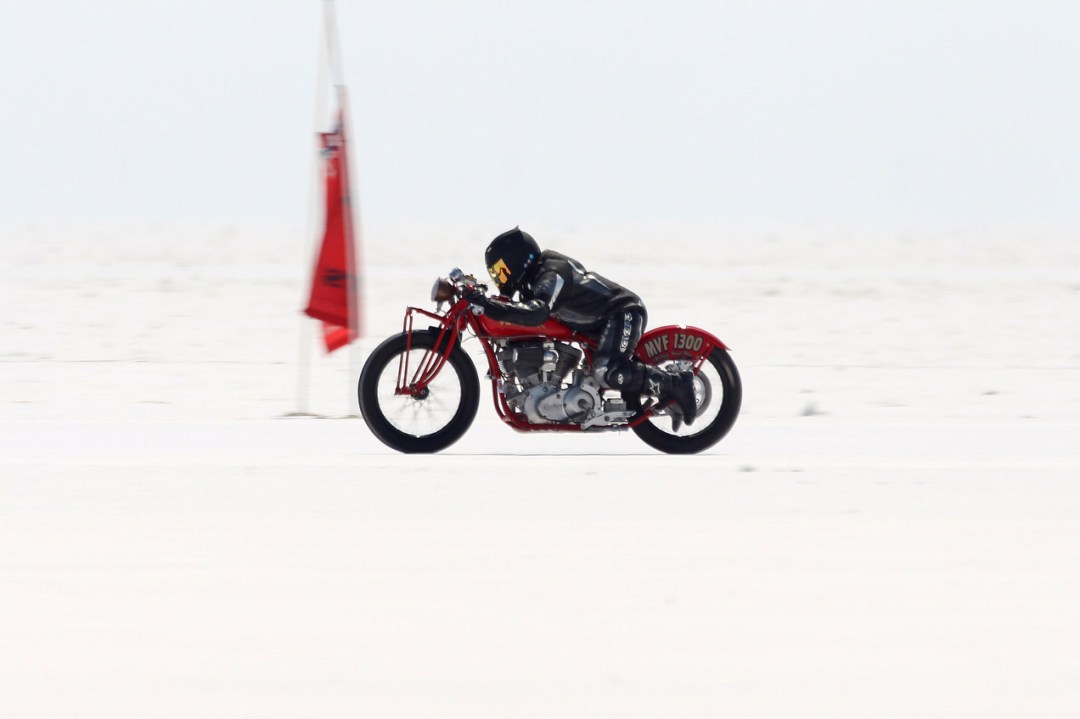 What do you like to do when you’re not shooting?
Get ready for the next shoot.

What’s next for you?
Well in additional to the regular work and Bonneville, in January of 2012 I am starting a book on “Women with Ink”. It should take about a year to finish shooting. Know any women with great ink, please send them my way.

“Personal goals, your own little piece of history, bragging rights or just the rush of being able to go flat out for 11 miles without looking over your shoulder for red and blue flashing lights. It is the passion with which these folks approach the event that is truly special. These are truly special people.”