Streetmaster :: Performance In The Triumph Tradition

Interview with Streetmaster’s Richard Varner. Richard on his creative process with Mule’s Richard Pollock, why many modern bikes have so little identity, and how his bikes haul ass. (Special thanks to Chris Dodge for setting-up this interview). 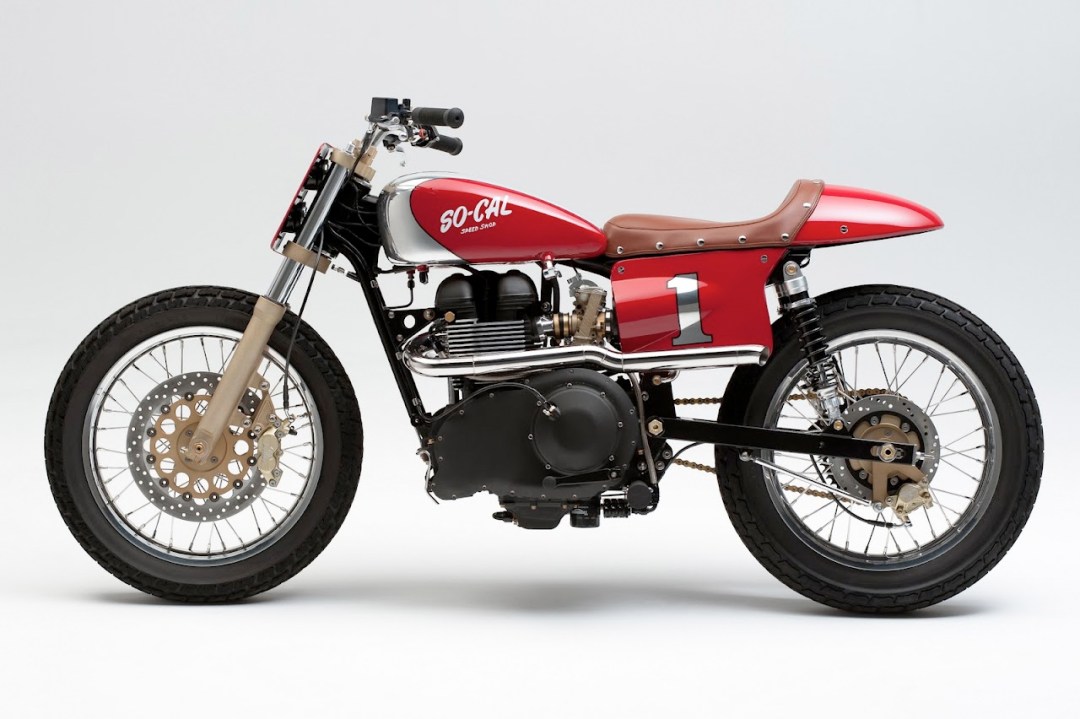 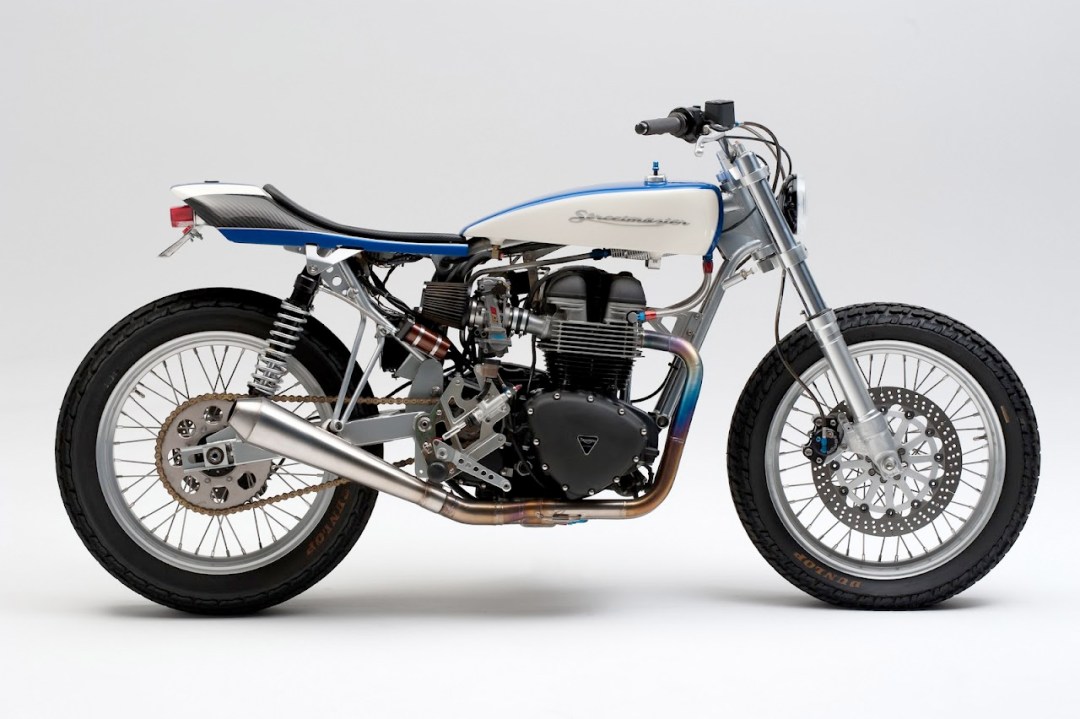 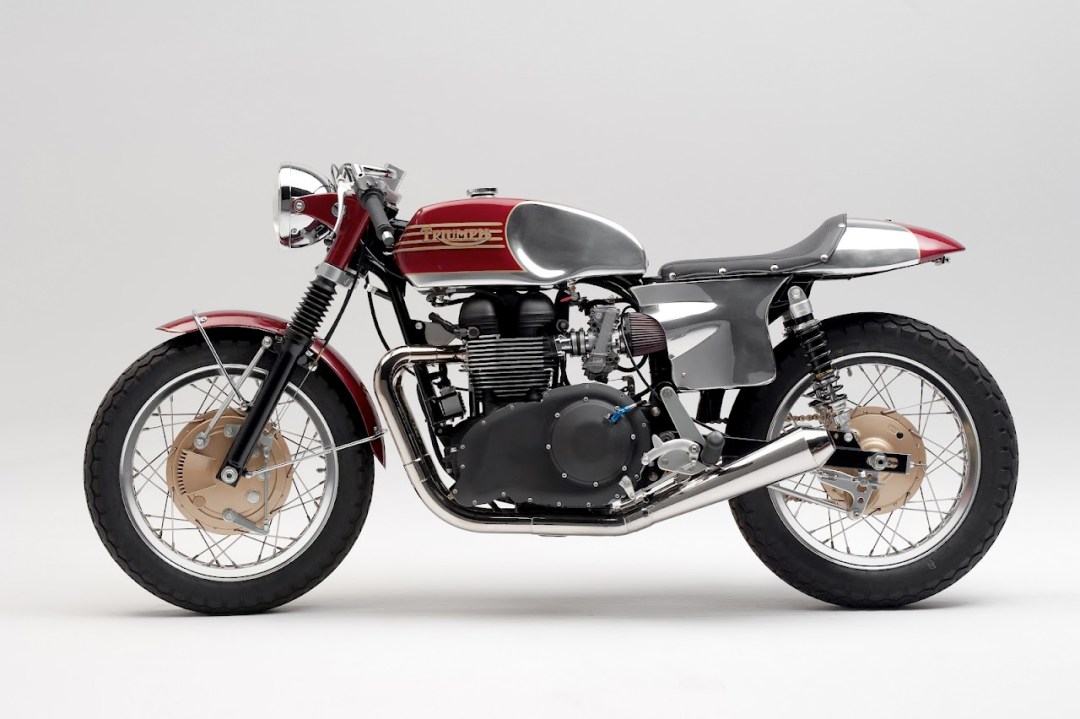 “If you can build a performance bike, that has heritage styling, you’re back in play. Also, who wants to kick over a performance engine, rely on old electrics and systems, and have it leak on the floor?”

About Richard Varner:
Born in Kansas, school in Nebraska and Kansas. Worked most of my career in oil refining, marketing, trading and logistics. Currently own companies involved is natural gas distribution, crude oil logistics and of course Streetmaster and Champions Moto. Family business is ranching. Married three kids, two grandchildren.

What was the first motorcycle you ever owned?
A Steen, Lil’ Taco mini bike, 3.5 Briggs and Stratton, hauled ass.

What’s the first motorcycle that you saw that burned into your memory?
Late 60’s Triumph Bonneville.

You’ve said, “We think we’ve struck the perfect balance between heritage and haul-ass.” Can you elaborate?
The idea is to build a performing bike that still has some style rooted in the history of the brand or motorcycle culture. Reliability, ease of operation, safety etc. that make it easy and convenient to ride, but doesn’t make you a “circus act”. I mean a 40 (or 50) year old guy on a rice burner is a bit hard to pull off. But if you can build a performance bike, that has heritage styling, you’re back in play. Also, who wants to kick over a performance engine, rely on old electrics and systems, and have it leak on the floor?

Why Triumph? Did you ever consider another manufacturer?
I like British engineering, it has a personality just like the French, or Italian machines have. Ferraris, Maserati’s, MV Agusta, Cagiva, Ducati all have the same flavor and feel, and also the same type of owner. British stuff takes a little more involvement. It starts with the positive ground setup and ends with Whitworth tools. Also it’s not a Harley. The early Japanese makes (1960-1980) are fascinating to me because they went from copying to leading. Lastly, “Steve” [McQueen] rode one.

What’s the creative process at Streetmaster?
It’s part me just liking something. Simple, light, fast, and iconic. Other times it’s been me and Pollock looking at pictures, or the guys here at the shop shooting the breeze. A lot goes back to what caught my eye as a kid. 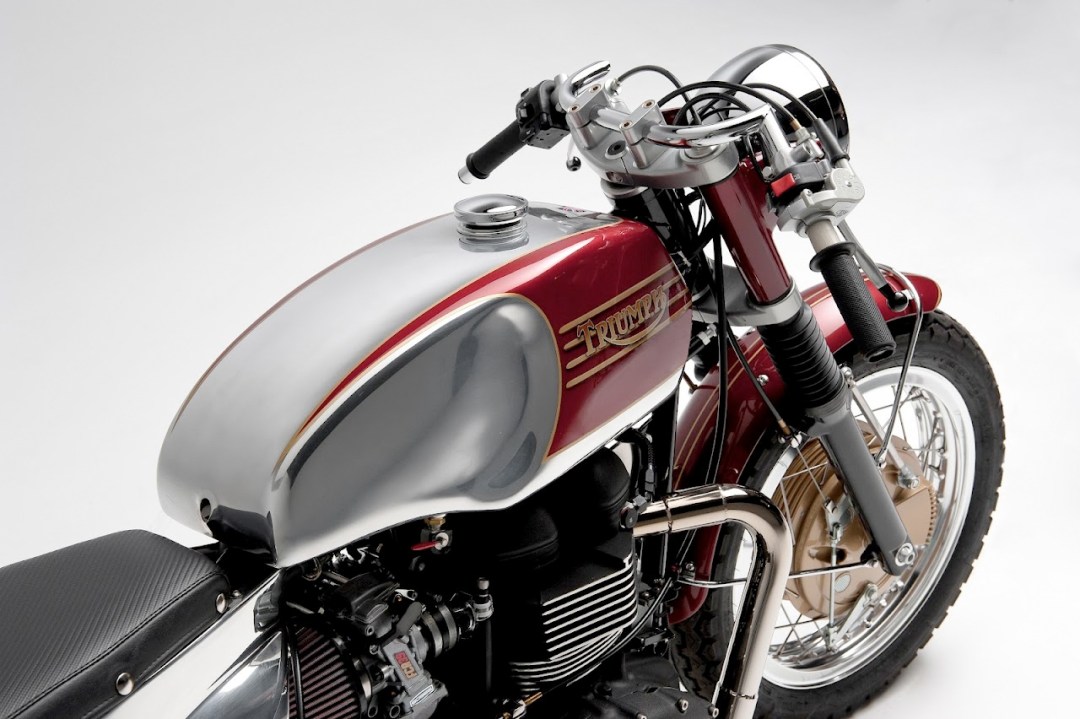 What vintage motorcycles do you look at for inspiration?
Early Goldstars, AJS, Velocettes, Bultaco’s, 1967-1970 Triumphs, the whole Rickman concept, Trackmaster frames, Ron Wood’s racing bikes. Later on the CBX’s were about as neat as an engine could be.

How much of the design of your bikes is done on computer?
Really very little.

Who do you think will want to buy a Streetmaster?
We’ve really just started, but it will be someone like me that likes to ride, wants something different, something like a race bike but not a sportbike. It’s not about raw horsepower, it’s almost more about the weight and response.

One of your stated goals is, “improving the breathing, ignition and weight of the machines as a means to our goal.” Can you elaborate on how you’re trying to achieve each of these goals?
Heads&cams- we’ve got our own grind, Branch flowed the heads, larger intake valves there, re-mapping the ignition, lighter flywheels in some cases. The all up weight of the titanium bike is only about 305 lbs. Our best effort with 900cc’s is about 80 HP, with 62 ft.lbs of torque. 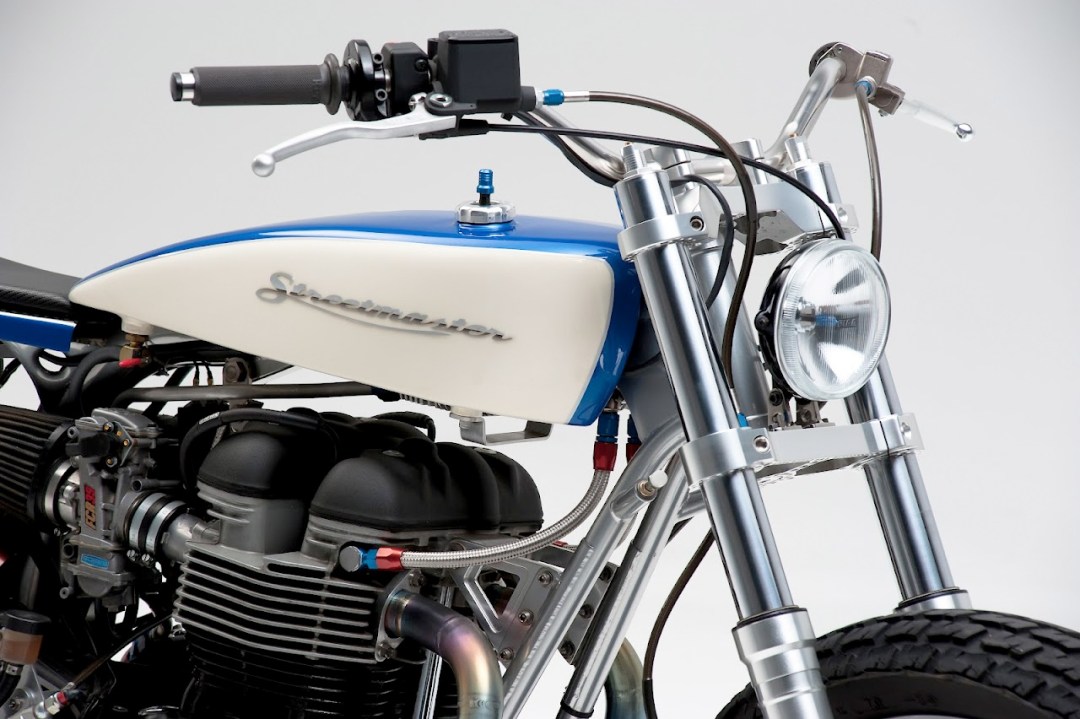 I mean this in the best way – The Streetmaster model looks like it could have came straight from the seventies. Can you tell me what you were going for in the look and feel of this particular bike?
Absolutely as much like a Trackmaster race bike as we could. It’s no different than a Cobra, light weight, high horsepower, they handle and go. With respect to the aesthetics, I feel many bikes have lost a their identity. Fairings are good, but the body work is no longer organic looking IMHO. With probably the exception of a Ducati, and Guzzi’s, they aren’t instantly recognizable. Even then, it’s hard to tell from a distance between some of the Italian makes. Bikes are about the machinery, the Triumph engine was meant to evoke the original vertical twin, the engine gives it an identity.

You have three bikes: Streemaster, So-Cal Moto Sport and the Brighton. What’s the common engineering and design thread amongst all these bikes?
The frame and engine are all the same, plus some of the body parts between the Miler and Brighton are common.

You’ve said that you want a bike that’s less than 300 pounds, and has around 70 horsepower. Why are these numbers so important?
Well I think it goes back to the issue of performance. There are very few motorcycles today that weigh 300 hundred pounds. Even the Grand National Championship bikes have to weigh a minimum of around 320 pounds wet at the end of a race. A 300 pound motorcycle denotes a machine that is race inspired. With respect to power, 70 to 80 bhp is easily achievable and is a very reliable motor. So the end result is a bike that is effectively racing motorcycle with reliability and tractability. 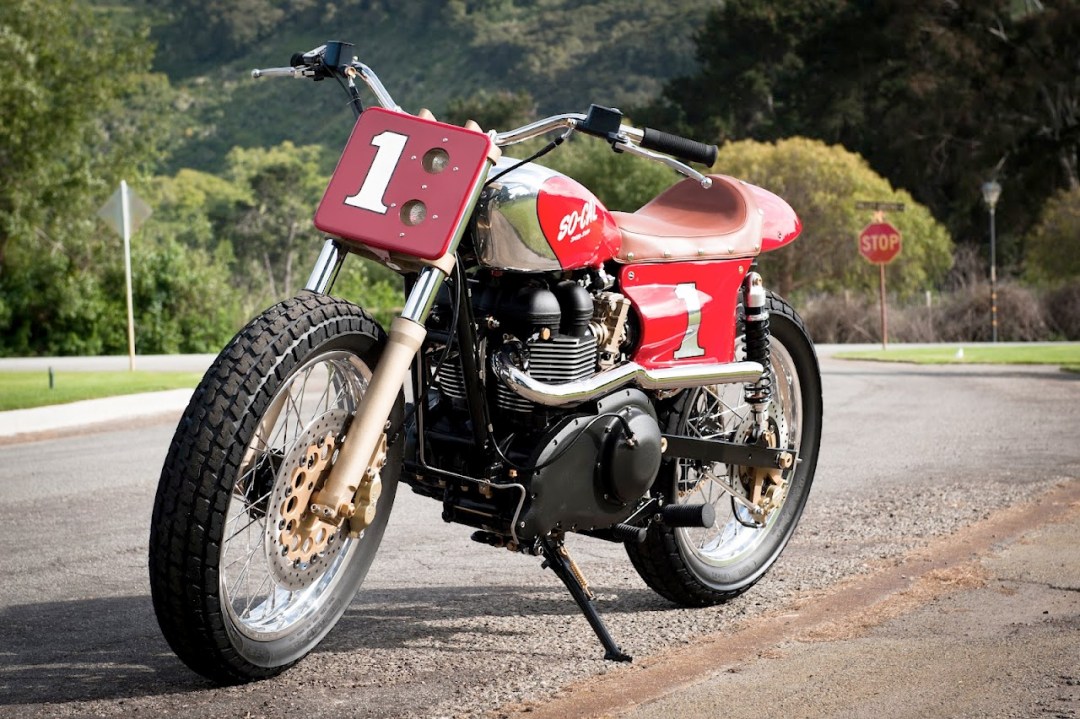 On average, how much do the stock bikes weigh before you start stripping them down?
The stock Triumph Bonneville motorcycles run in excess of 550 pounds. 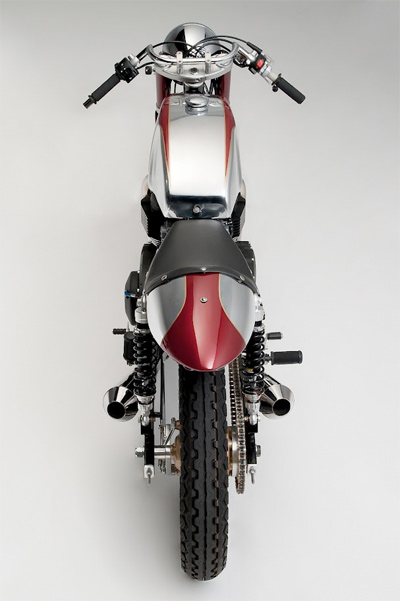 Where do you test ride your motorcycles? What exactly are looking for in the ride and performance?
We’ve run a few of the bikes on dirt tracks, but mostly we run them on dynos and on the street. We look for good balance and weight distribution, strong, progressive braking and then the balance between quickness or hard acceleration. I feel the two are somewhat different. A quick bike is probably more fun to ride on the street. By quick I mean good throttle response, turns in well, and revs freely. The dirt textile motorcycle looks for more progressive power application and more low end torque.

You’re using titanium extensively (down to the nuts and bolts) on the Streetmaster to cut-down on weight. How much difference does that make?
It is hard to know precisely how much difference the titanium components making the overall weight. Richard Pollock told me one time that you don’t gain pounds you gain ounces. Roughly I would say probably makes an overall difference of 20 to 30 pounds in the total weight of the motorcycle. 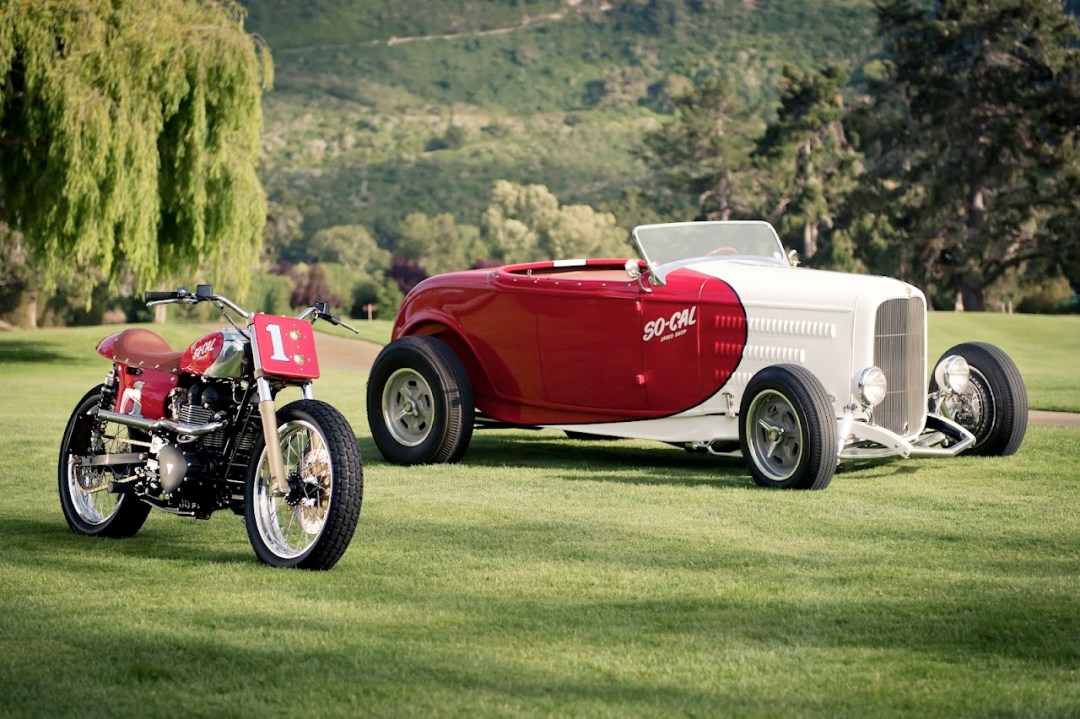 So you guys are creating all of these enhancements to make a Streetmaster lean and mean. How come motorcycle manufactures just don’t do this from the start? Create a very exclusive line of minimal and light bikes that are very nimble and fast?
That’s a question we’ve asked ourselves several times. I think the answer lies in that need for a major manufacturer to build a motorcycle that appeals to the widest group of people. Not everyone rider will appreciate or even want a motorcycle with this type of performance. So a motorcycle that covers most the bases is a much better economic bet the one that is appealing only to a narrow segment of the population. Besides having a strong platform to customize or to personalize a motorcycle is not a bad place to start.

Why did you want to start a business like this?
The old platitude is holds true, it’s not work if you love it. 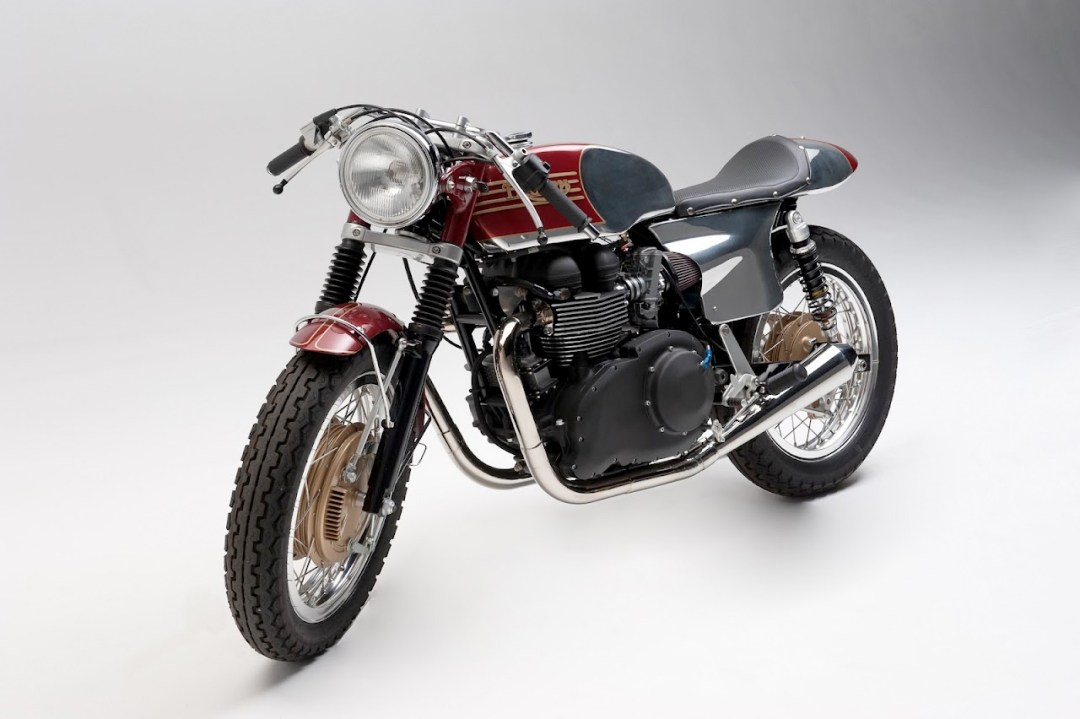 What’s the best thing about having your own business? Downside?
It’s mostly about being in control of your own time. Time is the most valuable thing we have. Downside? Very few of these deals make any real money. It has been said, the two most over rated things in the world are natural childbirth and owning you own business.

What brands out there do you take inspiration from?
Ducati, Norton, Triumph, MV

Favorite line that you repeat time after time?
“Safety never takes a holiday”

What’s ahead for Streetmaster?
Our apparel line under the Champion’s Moto comes out this spring, along with additional parts such as the oil cooler, pipes, seats and tanks for stock Bonnevilles. We recently finished a dirt track bike that we are trying to decide whether to campaign. Lastly we have formed an association with a well known industry figure to begin developments on other bike brands. Stay tuned!