Proudly hailing from Indiana, Corey and Casey Wilkinson run Wilkinson Bros. – a design and illustration studio. (I would almost instigate a small crime spree to have their amazing space). In this interview, Corey talks about their studio, motorcycles (their blog, Good Spark Garage covers moto-culture) and how working close to the Racing Capital of the World is good for business. 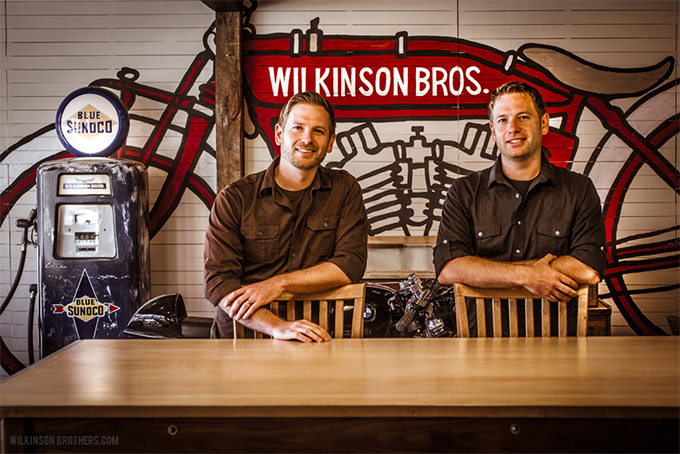 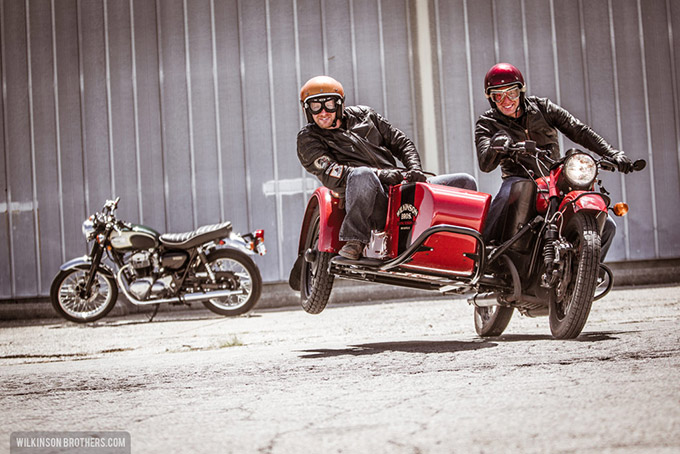 Tell us a little about you and Casey and where you live and work?
We’re graphic designers and illustrators who run a small shop in the Indianapolis area. We live and work in the northern burbs where our office is located in the Carmel Arts & Design District. Though many of our clients are in the Indy area, we serve clients all over America. 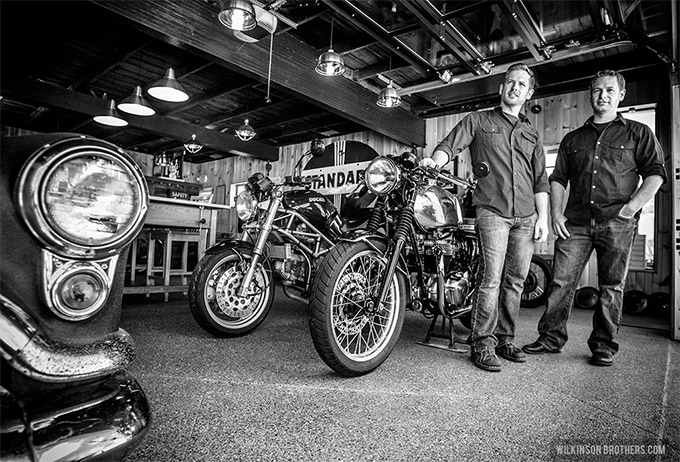 You guys are twins. (Identical?) How are you the same? How are you different?
Yep. Identical. Lotta folks who know us don’t have trouble telling us apart, but nearly every day when we’re out n’ about we’ll hear, “you guys twins?” Our personalities are pretty different, but our work ethic is similar. We each have our own families and live in different communities, so we’re not inseparable, but when it comes to work or motorcycles we’re on the same page. 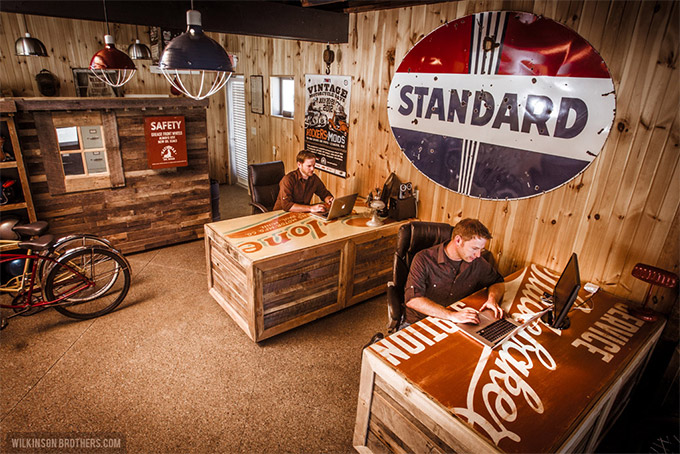 “Our personalities are pretty different, but our work ethic is similar. We each have our own families and live in different communities, so we’re not inseparable, but when it comes to work or motorcycles we’re on the same page.”
– corey wilkinson

Two brothers working side-by-side…how do you not get sick of each other?
It can get intense. There are heated debates, but they’re usually short-lived. Regardless of battles, there is 100% accountability to help each other out. With a lifetime of collaborating, we’ve learned to make it work…our families depend on us.

What’s your guys daily routine like at work? Who focuses on what?
Each day is completely different. It’s tough to assign a specific block of hours to be creative, so our hours aren’t traditional. It’s one of the reasons we left the agency realm. As for focus…well…if it’s sunny outside, we lose focus quite easily. Especially since our motorcycles are parked next to our desks. 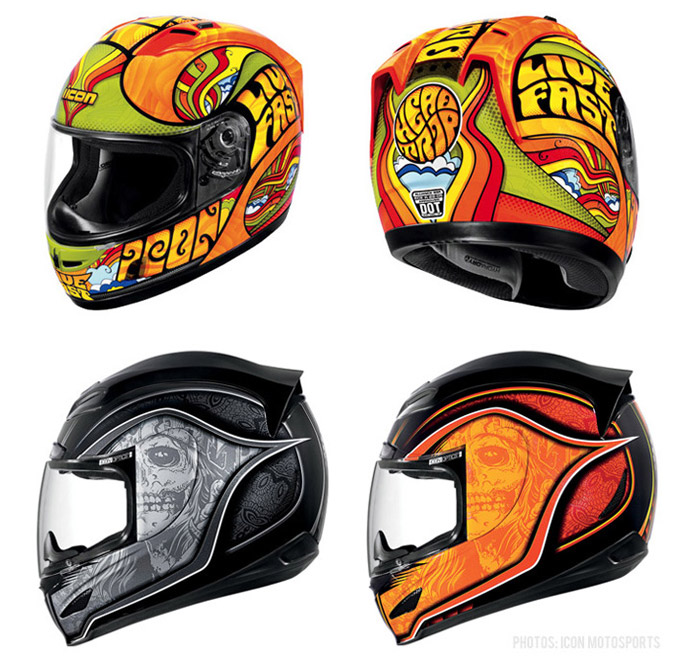 Best thing about owning your own design firm? Downside?
We love our wives and children. Having the ability to adjust our schedules to attend field trips, soccer games or witness a toddler’s first steps is huge. Downside? There are times you wanna mentally clock out, but can’t.

Do you remember the moment when you decided, this is what we want to do this for the rest of our lives?
When we were kids, we drew, painted, built things out of wood and created little towns for our Hot Wheels in Mom’s flowerbed. In middle school and high school, we designed yearbook covers, illustrated for the school newspaper, hand-lettered signs, did a little pinstriping and were lucky to have art teachers who introduced us to what was then called, “Commercial Art.” Mrs. Goodridge sent us both to a local ad agency where we watched a TV commercial being concepted and storyboarded. Seemed like a good way to get paid for being creative!

What artists/designers influenced you the most?
We grew up on Ed Emberley books (seriously, check this guy out for your kids). Casey was inspired by the CARtoon magazines and guys like Dave Deal, Lance Sorchik and Hector Cademartori. Corey studied comic strip artists like Charles Schulz, Jim Davis and various editorial cartoonists. For graphic design, the styles of modernist Lester Beall and the constructivist Stenberg brothers were inspiring. 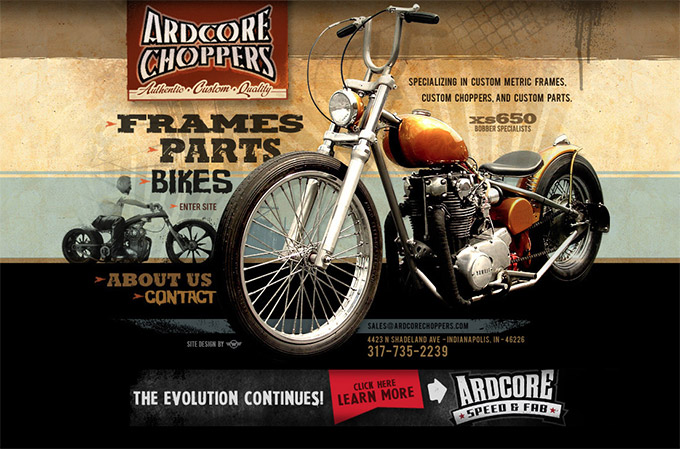 How did you become interested in motorcycles?
Our dad was a lifelong motorcyclist who instilled in us a passion for traveling by bike. He raced a section of a Baja 1000 in the 70s and raced a micro-midget at places like Riverside and Ascot in Southern California. When our family moved back to Southern Indiana from San Juan Capistrano, he taught us how to ride when we turned 6 on a li’l Yamaha Tri-Zinger. Later, we moved on to racing go-karts and riding dirtbikes. (Wish we still had our ’85 XR350.) We like to mix up what we ride, often selling one bike to get another. We’ve had sportbikes, sport-tourers, supermotos, nakeds, classics, dualsports and retros. 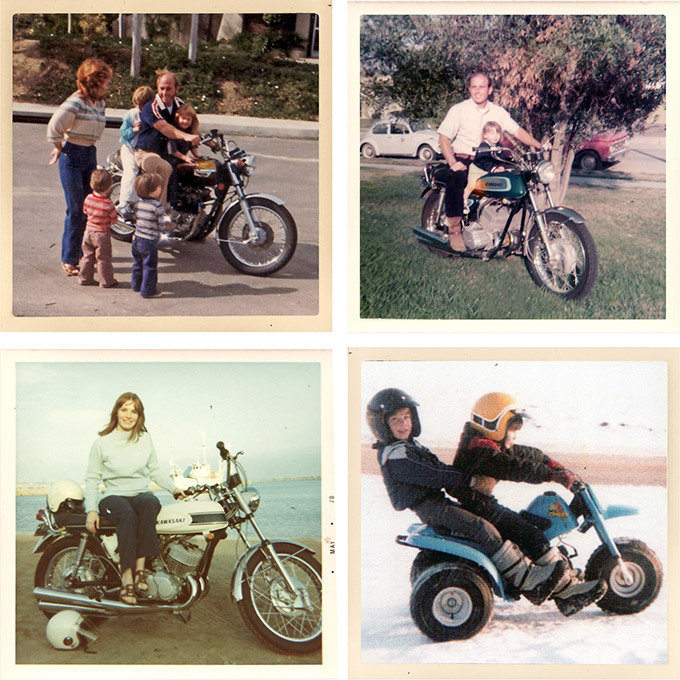 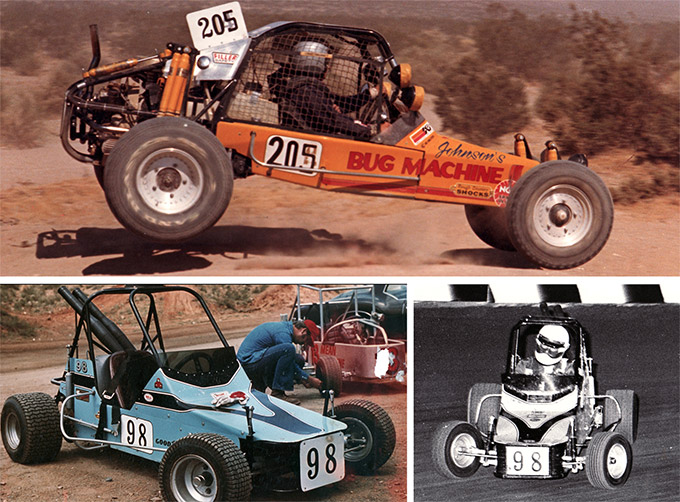 You both ride some killer-looking bikes. Can you tell me a little about these two bike?
Casey’s 1976 BMW R75/6 basically became an art project after purchasing it at AMA Vintage Motorcycle Days at Mid-Ohio. We’re always adding an element or two of artistic flair to our bikes, but this one was taken further with a modified frame/tail section, monoshock suspension and stripped down for a more simple, aggressive stance. Corey’s 2000 W650 conversion pays homage to the original British cafe racers. Both of these bikes are ridden as often as possible. None of our motorcycles are free from road wear and paint chips; we ride the heck out of ’em. 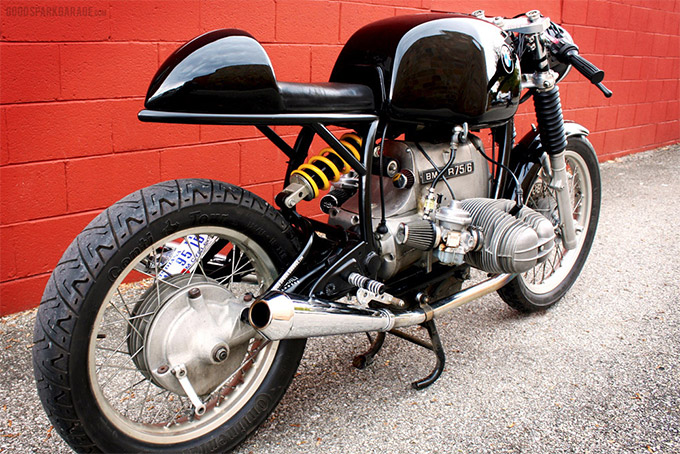 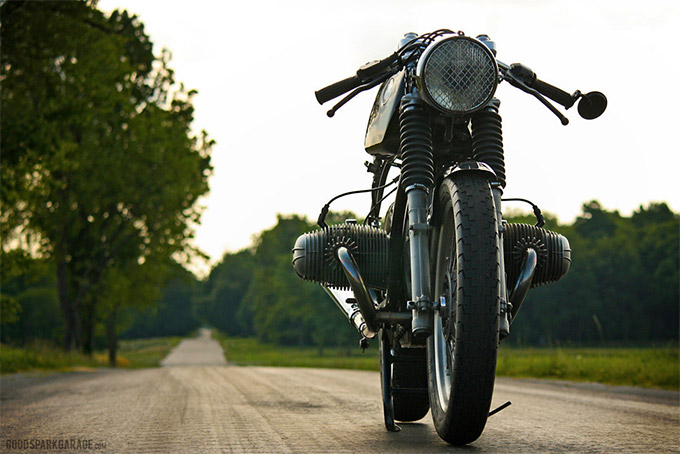 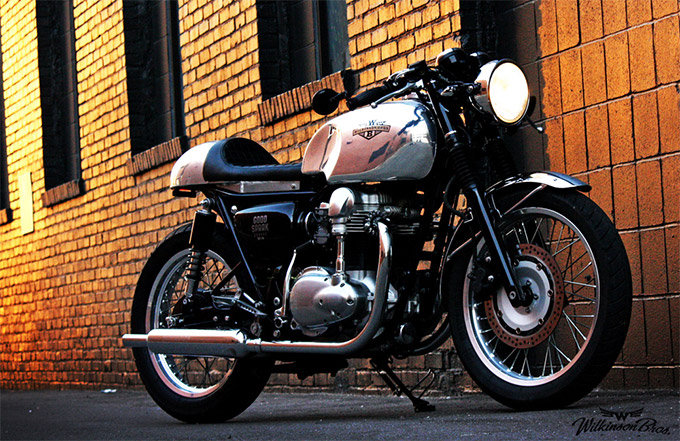 That Ural Sidecar has some serious fun painted all over it. How did it become the “shop” bike?
We obsessed over owning a sidecar for too long. When our design biz hit the 10-year mark in mid 2013, we celebrated by buying a 2010 Ural Red October (only 26 of this style were built by the factory). It’s some of the most fun we’ve ever had with a throttle. With the improvements made to Urals in the past 5 or 6 years, the performance has been great and the vintage looks of the almost-all-metal rig oozes the kind of nostalgia we dig. It sits ready for a pizza pick-up or a bank run and turns heads wherever it goes. We designed and applied some vintage-inspired branding on the tub, officially making it the WB shop bike. 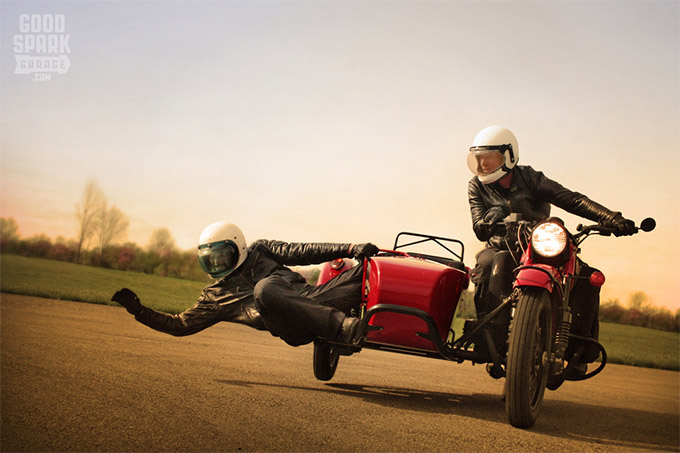 Where do you like to ride around in Indianapolis?
The ol’ grid system of roads in Indy can be a bit lackluster, but putting around on vintage/retro bikes makes commuting and cruising fun for us. When we wanna hammer down and scrub the tires, we can ride an hour south just below where the glacier hasn’t flattened the hills and valleys. Highway 135 and the roads around it in Brown County are beautiful and challenging (near Story and Nashville, IN). When we need our fix for even more curves with some mountain views, we’re frequenters of Deals Gap, NC.

Best thing about living in Indiana?
The cost of living is great. Folks ask us why we moved from Southern California to Southern Indiana. Our parents wanted to return to the chill, Midwestern vibe of their hometown. There were a lot of hard workers in our circle of friends, family and neighbors, who helped establish our blue-collar upbringing. Having worked on several Hoosier farms, you certainly learn how to be resourceful and have pride in your own work.

What kind of cars do you all drive?
We wish we could say our family cars include a bagged ’66 Carryall or a chopped ’57 Nomad, but for now, Casey is rocking a crew cab Tacoma and Corey hauls lumber and his children in a Tahoe (not always at the same time). One fun vehicle we share custody of is a 1971 Meyers Tow’d, powered by a 1600cc VW. We unfortunately lost our Dad to cancer a few years back, so we now look after his buggy, keeping it revved and driven. That thing gets lotsa looks. 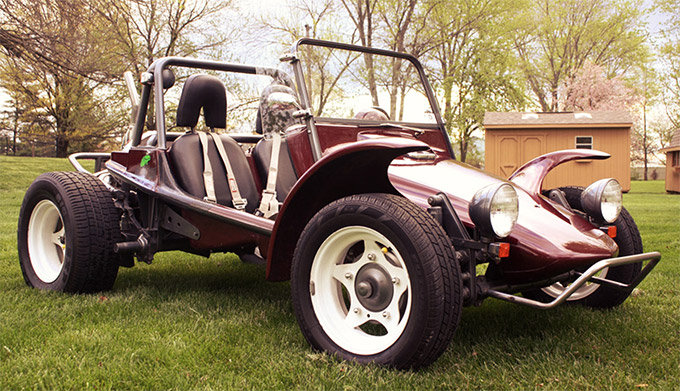 How would you describe your process when it comes to motorsports design and illustration?
We’re actually pretty old-school when it comes to concepting. It always starts with pencil and paper. We’re not Luddites, we just like smearing graphite for shadows and drawing highlights with an eraser. Casey is more of the automotive-minded illustrator. He can identify the years of old cars by creases in fenders or shapes of grilles. There’s an art to torqued toons that only comes from years of practice and a passion for things with engines and wheels. Of course, we lean on computers to finalize our motorsports design and illustration so they’ll be ready for the digital world. We like creating stuff that makes people want to twist the throttle or mash the gas.

You have this really timeless antique-sign approach to your typography and logos. Where does that influence come from?
Remember driving down the highway with your Dad or Grandpa? Not the 4-lane, Eisenhower interstates, we’re talking the old main roads that led you straight into cities and towns. We learned to appreciate the multi-bulb marquees and giant gas station signs with killer lettering and weathered paint. They were from a time when businesses seemed more mom-n-pop and service-oriented. You’d find a deco diner where a waitress called you, “Hon’.” You’d pull into a service station where a bell would alert an attendant who’d wash your windshield with a fill-up. You could see brush strokes and feel screen-printed layers on porcelain. It was Americana at its finest.

Your studio space is spectacular. Can you describe why you decided to make a space like this?
We want to enjoy coming to work. We like to surround ourselves with “fun” and reminders of the good ol’ days. Baseball gloves, Frisbees and soccer balls are always within reach and we actually use a lot of the décor, like the vintage Chicago rollerskates, the 40s-era oscillating fans and old Schwinn bicycles. We built our desks out of old pallets then hand-painted and distressed the desktops to look like old signs. We also upcycled a 1953 Oldsmobile we found in the woods, turning it into the “Oldsmodesk,” a one-of-a-kind workstation (the hood opens and lights work). Having the option to park our motorcycles in the space is a perk. In the digital world, we’re often confined to our MacBook Pros fighting deadlines, but in a matter of seconds we can fire up a bike for an escape. 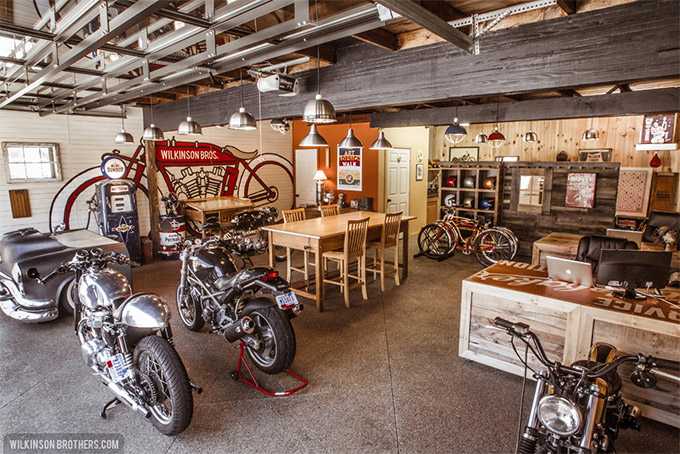 Cafe Racers, bobbers, retro-bicycles…one might consider committing a small crime spree to have their amazing studio. 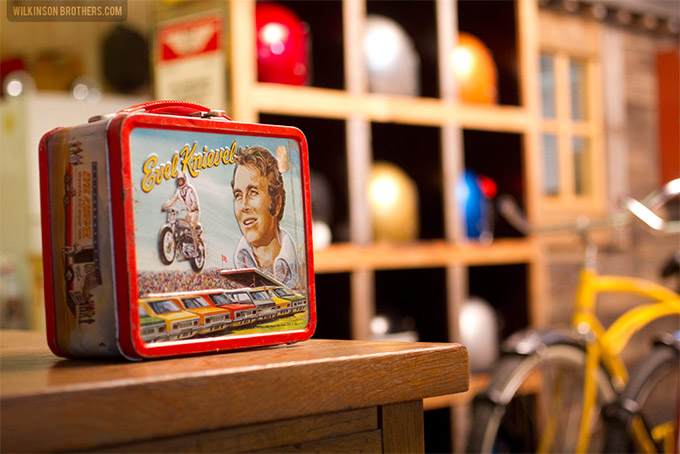 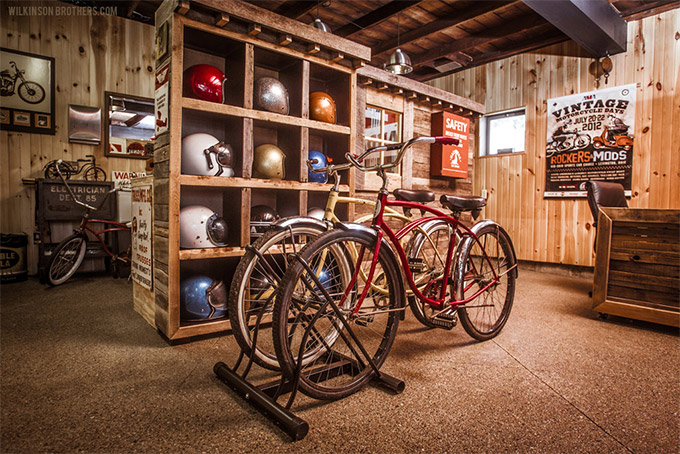 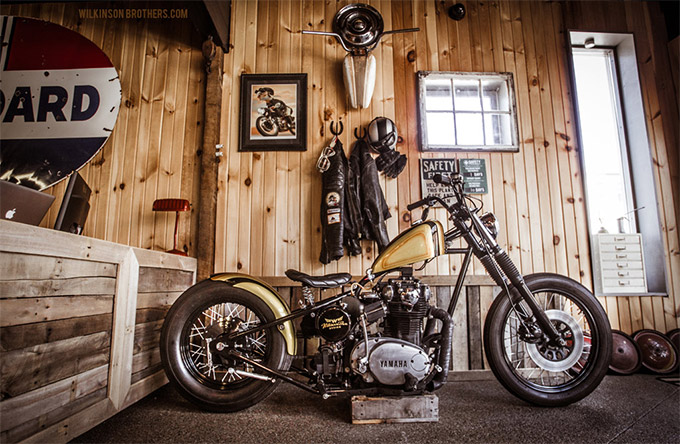 Tell us why you started Good Spark Garage?
We wanted to create a place online where folks can find storytelling and resourceful info about motorcycle culture. The kind of stuff you see and hear when you visit motorcyclists’ garages. The purpose? To keep in the fronts of minds the allure of motorcycling. It’s somewhat of a personal journal that we can hopefully spend even more time cultivating! 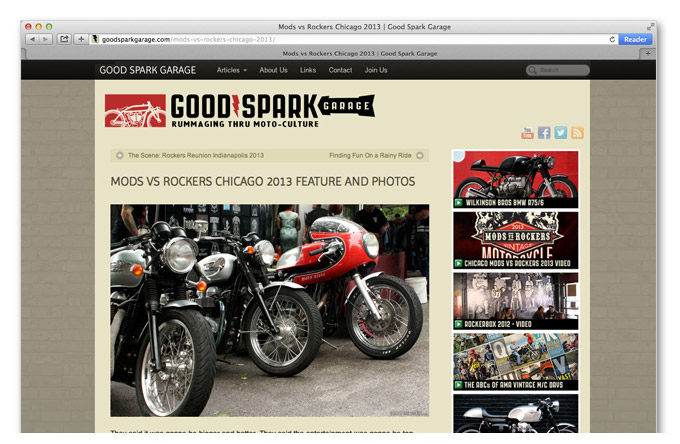 Indianapolis, how does the city influence what you do and how you approach your work?
It’s fun for us to be located just up the road from the Racing Capital of the World, allowing us to develop relationships with folks who work in the motorsports industry. There have been powersports tradeshows in Indy for a long time and there’s a nice community of vintage motorcyclists that we enjoy crossing paths with. It’s also kinda cool to hail from the same city as motorcycle legend, Cannonball Baker. Riding around town, we pass by old landmarks where auto/motorcycle manufacturing and testing took place, like the Stutz Motorcar Co., Diamond Chain Co., Wheeler Carburetor Co. and, of course, the historic Indianapolis Motor Speedway. It’s a great-sized market for us; it’s big, but small enough to establish a solid reputation and network of like-minded professionals. 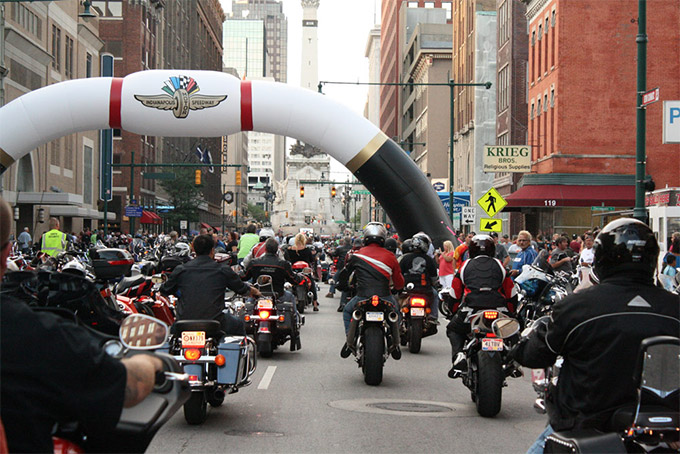 On a good day, how would your friends describe you?
Family men. They also wouldn’t be surprised to learn that we’ve fixed a dent in a truck with a plunger, two-by-four and a Nerf football. Or rigged up four snow sleds to a sidecar motorcycle. You might hear people say, “You’d never guess those guys ride motorcycles the way they do.” 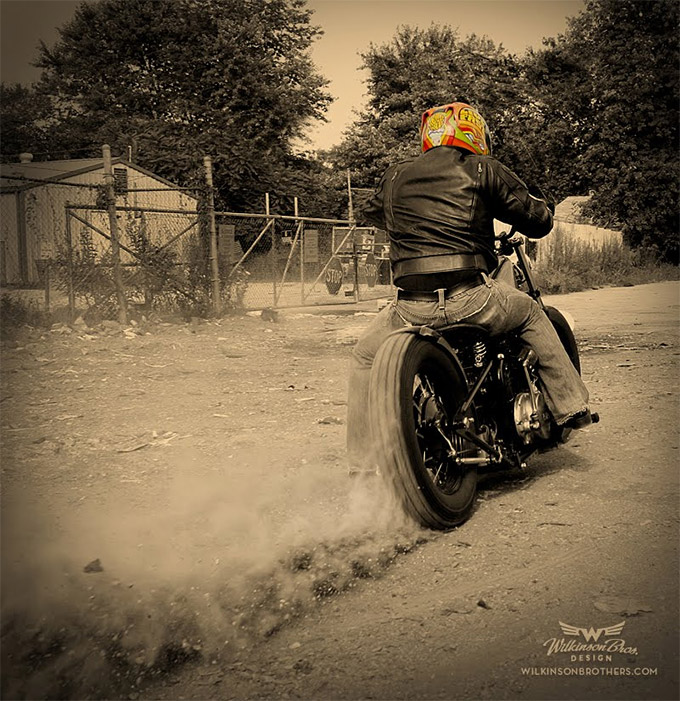