Adam Nickel’s illustrations have a 50’s throwback feel that really stands out. His work has graced DicE, Deus Ex Machina, and the Born Free Motorcycle Show. Oh, and has this ’55 Triumph Thunderbird that’s to die for. 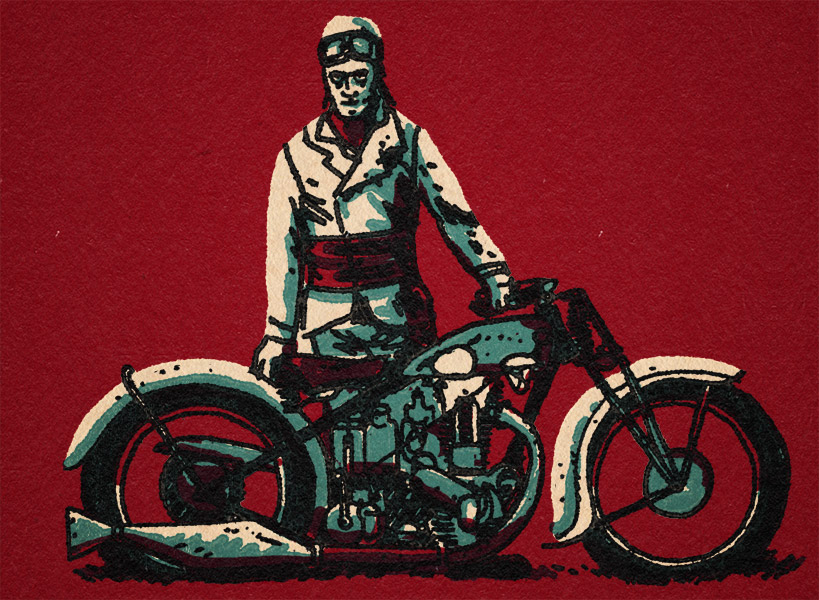 “I really dig the simplicity and stylishness of mid century illustration. I also started to lean toward it because I think it’s a style that really lends itself to the conceptual sort of illustration that is often need for editorial illustration.”
– adam nickel

Read the entire interview with Adam Nickel after the jump below…

Can you tell us about yourself and where you live and work?
I’m 33 (wow time flies!) I live on the Sunshine Coast, in Queensland, Australia. I grew up in Australia but spent some time living in Canada as well. I work from home and when I’m not working I like to work on my motorcycle or hang at the beach.

What’s your daily routine like?
Wake up, think of something to have for breakfast that isn’t cereal. Look at stuff I shouldn’t buy on eBay while I procrastinate. Most of my day is spent working though. I prefer to listen to podcasts instead of music when I spend so much time at my desk. I will try and fit a walk to the beach in the afternoon if I can. My nights are usually spent working, or wasting time on the internet while I procrastinate cleaning the kitchen.

Your editorial & advertising illustrations look like they could be found in a Look magazine from the 50’s. How did you come into this style?
Well I guess it’s just always grabbed my attention. I really dig the simplicity and stylishness of mid century illustration. I also started to lean toward it because I think it’s a style that really lends itself to the conceptual sort of illustration that is often need for editorial illustration.

In your words you have a love of, “…a love of everything old, especially if it has wheels on it.” Where does that come from?
I think I just love stuff that is both beautiful and creative but also very functional. Old cars and motorcycles fit into that category. I’m not sure where that comes from I just know that I have it. 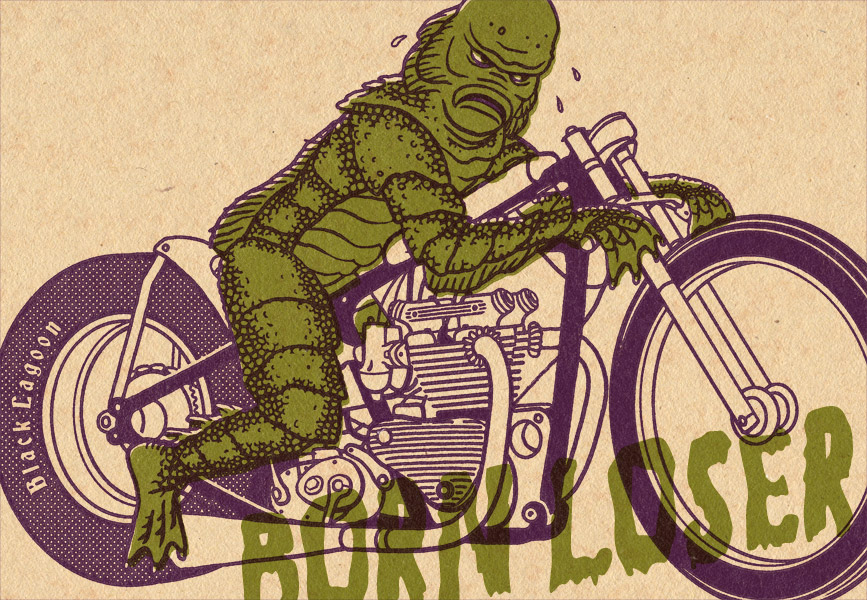 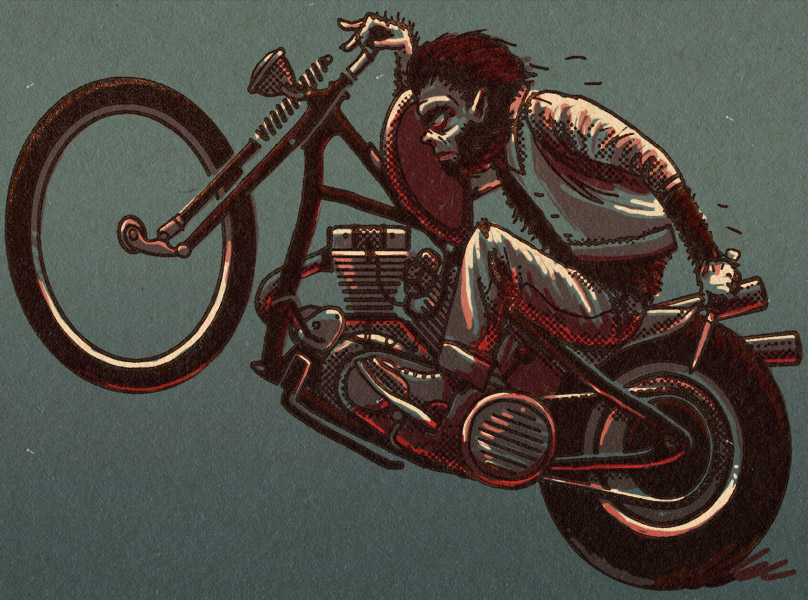 How have you evolved as an illustrator from your first days at this craft?
When I first started working as an illustrator my style was a lot more detailed and more painterly, and I was mostly doing Children’s books. I wanted to be able to get more editorial illustration work, so a shift to this mid century style just seemed to make sense. 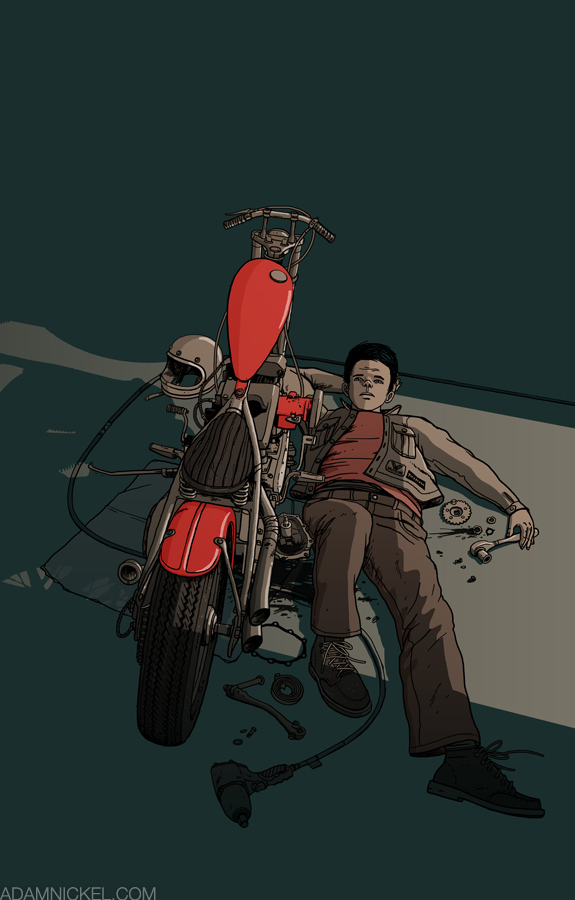 “Dreams, Dedication, Decisions and Defeat,” what was the inspiration behind this series of illustrations?
I was working on my bike and there was a problem I was determined to fix, after hours (actually days, really) of dealing with this, it was like 3am I felt total defeated and tired. I was working on the bike with it sitting on the ground (not on a lift) and I just laid back on the concrete and stared up at the ceiling, oil everywhere. I just thought at the time that if someone where up in the rafters that it would’ve made for a really cool photo. So I thought I would just illustrate that and I called it “defeat” and that got me to thinking about other emotions that come up with working on motorcycles. All of them starting with the letter “D” and so it just turned into a series. 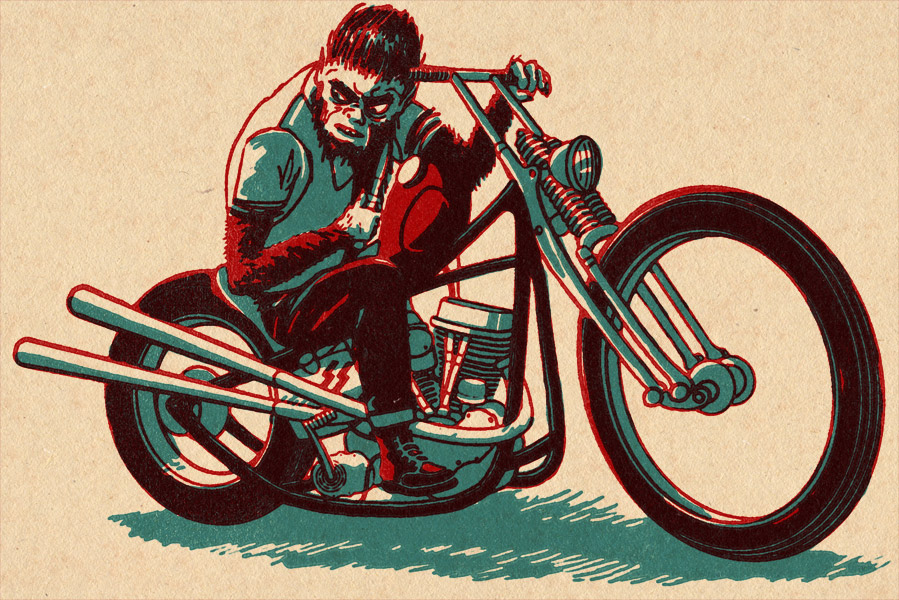 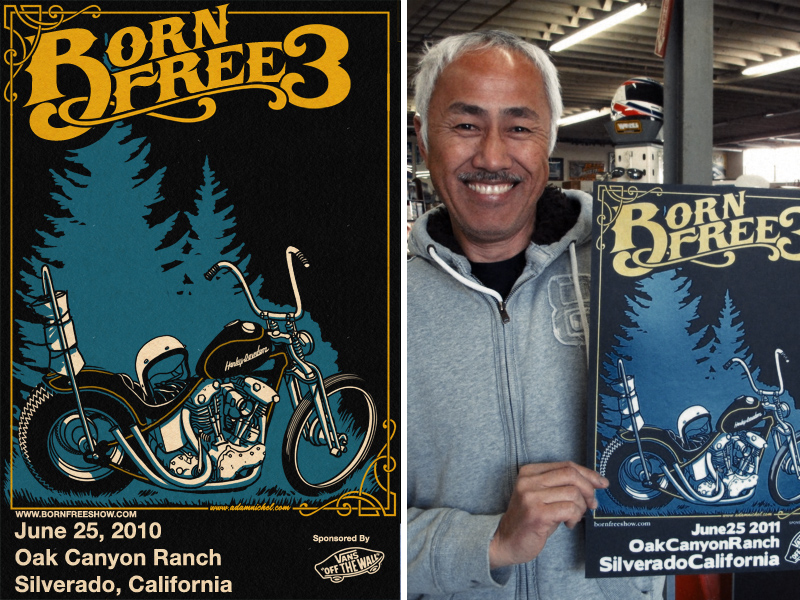 Please complete the following…if I could own any wheels in the world it would be…
That’s like asking a parent who their favorite child is; there could literally be a hundred answers to this question and for me it changes almost daily. But the first thing that comes to mind was the Fiat Mephistopheles. I imagine it would be quite an experience to drive. 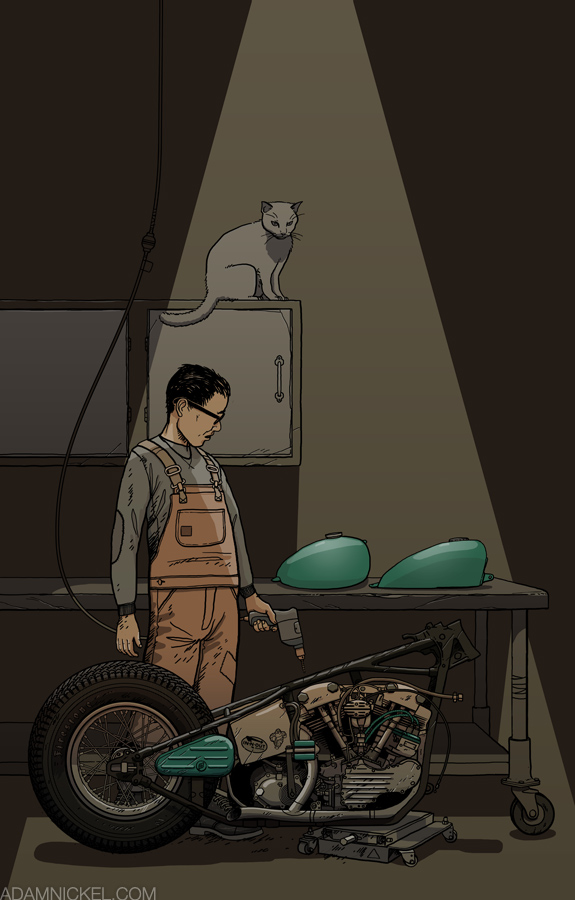 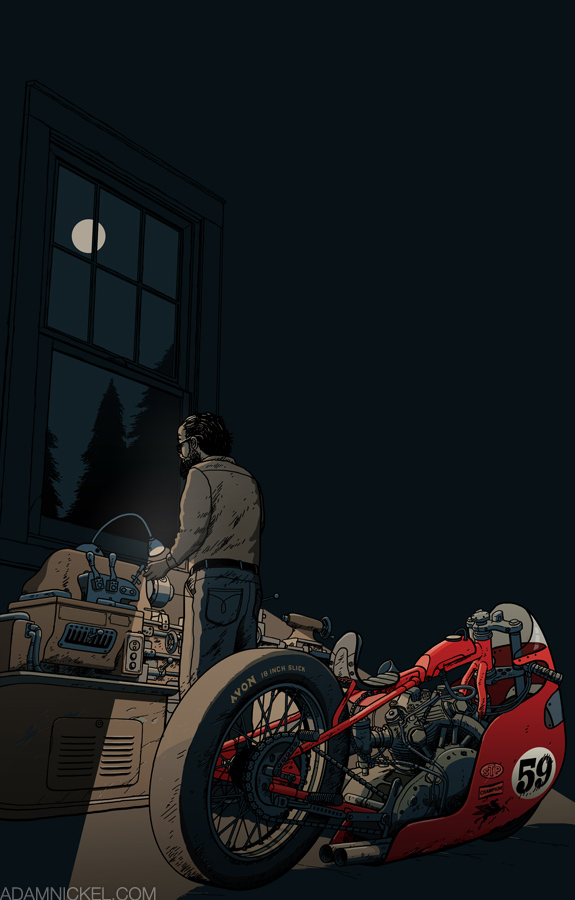 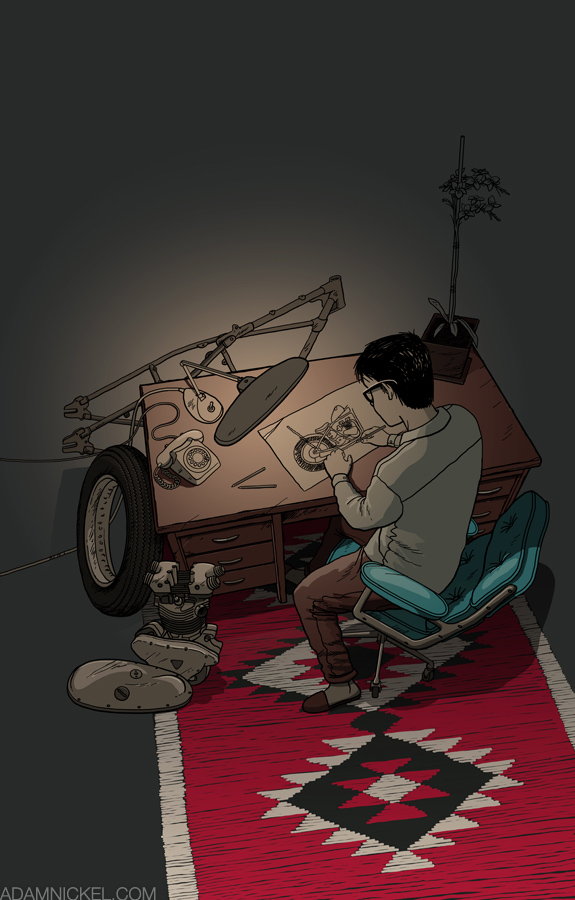 What’s your creative process and how do you determine the subject matter for your work?
I’m tucking away little ideas and influences all the time. It might be just something I see on the street or something in a book. Most of the time I’m dealing with editorial illustration as my job (rather than art where I can do whatever I want) so much of that is already determined by the particular art director that I am working with.

Best piece of advice you ever received about your craft?
I can’t remember where I heard this from, but doing the art itself and the process should be the reward. All the recognition and compensation is nice but really it should just be a bonus on top of the pleasure you already receive from just creating.

Artists that have influenced you the most?
For my editorial illustration a big influence has been the work that was done by UPA (United Productions of America) along with much of the illustration that was also going on at that time. For my recent series of prints it has been more of a return to what I was into in high school. Which is mostly the work of Katsuhiro Otomo. This more of a Japanese comic book style rather than the mid century illustration that I do for the editorial work. 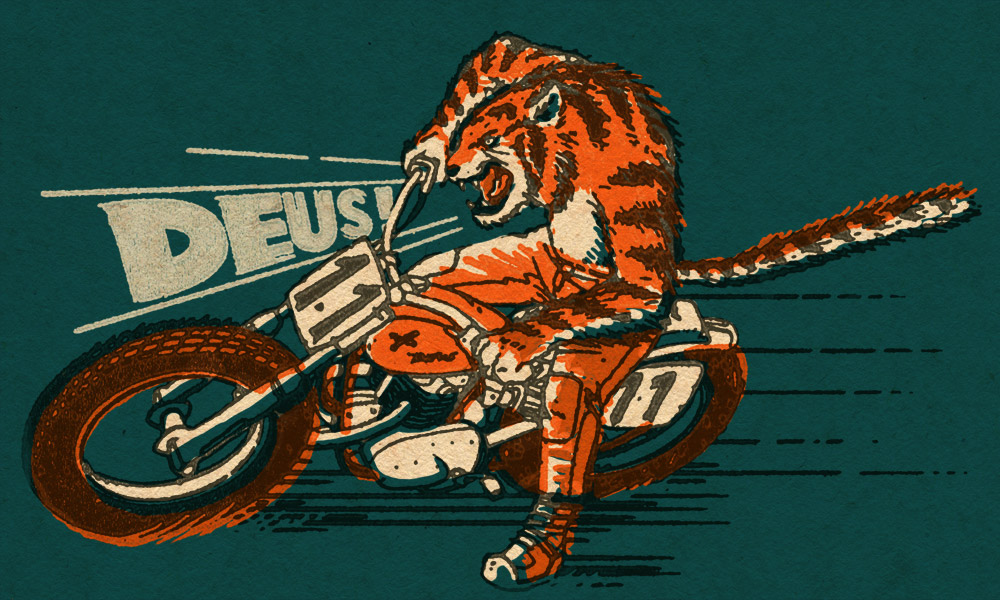 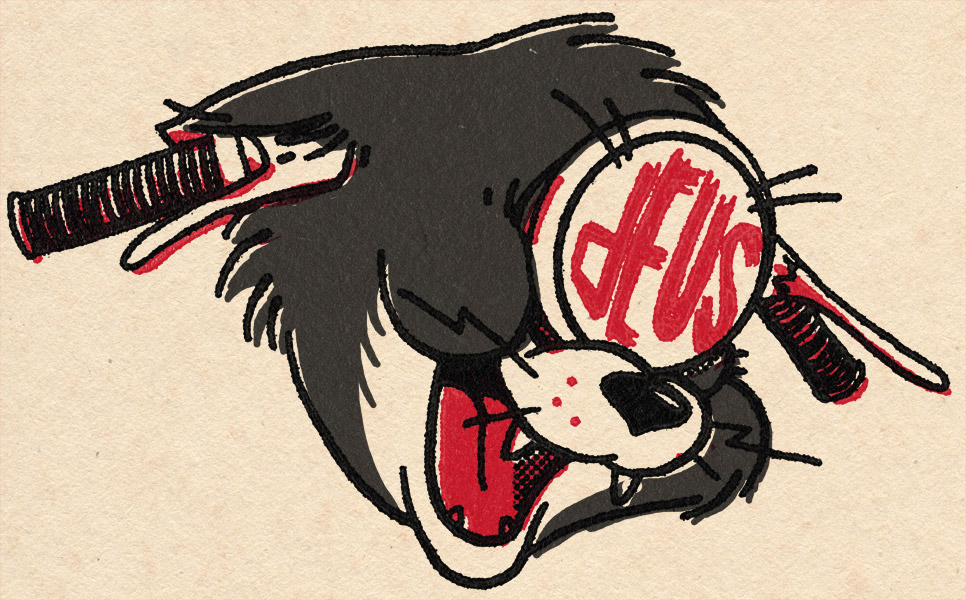 You did some illustrations for Deus Ex Machina – how did that come about, and what was that experience like?
I think from memory Carby (who basically runs their art debt I believe) had seen the DicE magazine cover that I did, so he contacted me about doing a few t-shirt designs. He was really great to work with. It’s was a fairly open brief, just limited to being motorcycle based art and they were really happy with what I sent back. Which is always nice!

Seeing that you mentioned that you worked on a bike of yours. What kind of bike do you own? What’s the story behind the build.
I have a 1955 Triumph Thunderbird. It started out as an oddly customized bike so I changed it up to something closer to what I like. I’m planning on changing it up yet a again when I can actually find some spare time.

Your favorite place to visit for creative inspiration?
Mostly creative inspiration for my editorial illustration comes from looking through old magazines. There is so much to be found if you just go digging. Illustration was utilized in print so much more often in the 50s than it seems to be now. I’m guessing photography wasn’t as easy an option as it is today. 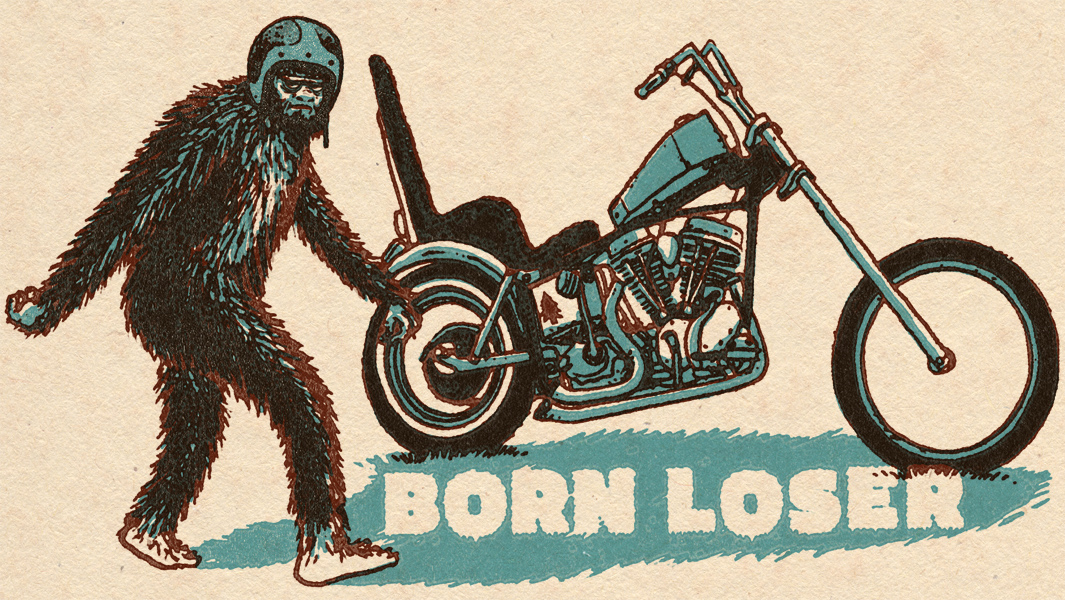 What are you working on now and what are your upcoming plans?
Right now I am working on the poster for “Born Free 5” (a motorcycle event). For the future Im hoping to work on more art pieces and prints. Im wanting to start working with traditional media instead of working completely digital. Im thinking it will be nice to be able to have actual original art.